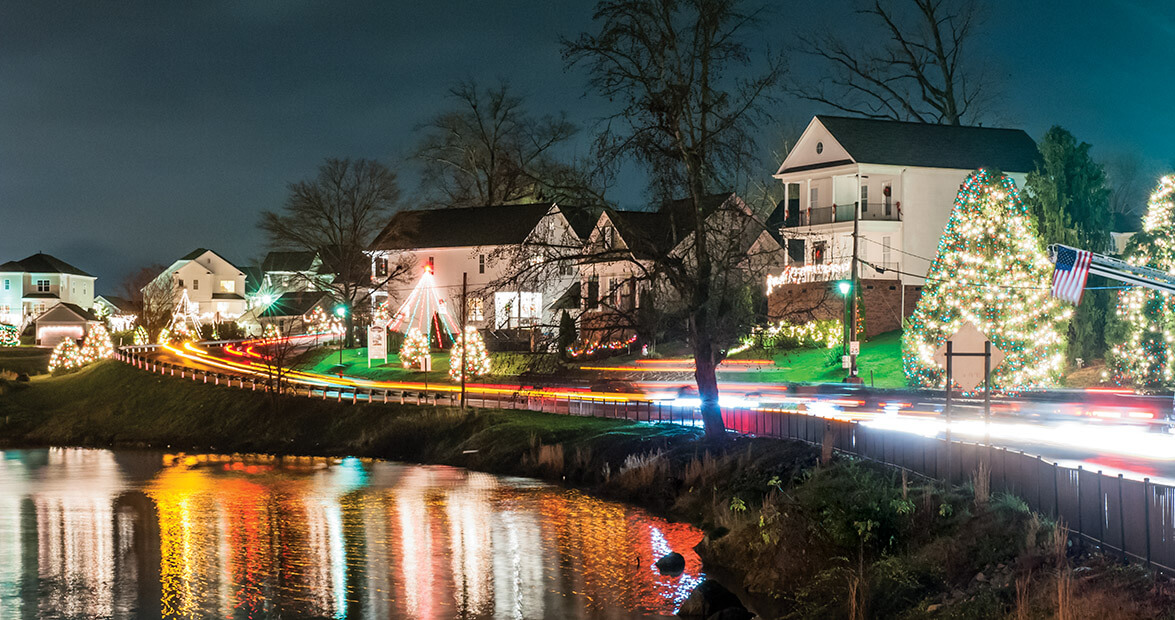 The Christmas magic is tangled. Like, really really tangled.

So there is work to do. A lot of work. And inside a nondescript workshop in town, a half-dozen men dig through, tug on, and twist apart green spaghetti piles of wiring. When unfurled, there’s enough wattage here to light up the entire town. That’s the way it’s been here for decades.

From the first day of December until the day after Christmas, this town of barely more than 600 residents plays host to nearly 600,000 visitors. For 26 nights, a conga line of cars slowly snakes through the towering evergreens, creeping along a route that escapes Interstate 85 to ease through the valley of the South Fork River. Connect-the-dot red taillights move downhill on Main Street, turn right onto Wesleyan Drive just in front of the post office, dip down by McAdenville Lake, and then climb back up toward U.S. Highway 74. On a weekend night, the 1.3-mile ride can take hours. Traffic blocks nearly every residential driveway. But no one minds.

Instead, the local residents, who can’t get out of their driveways anyway, are out on their front porches waving to visitors. And those visitors wave back from their cars, their windows rolled down, ignoring the winter wind to hear the chimes from McAdenville Baptist Church, the echoes of spontaneous caroling, and the never-ending shouts of “Merry Christmas!” People come from every corner of the Carolinas and beyond, eager to be enveloped in the music, glad tidings, and the source of McAdenville’s enchantment — the signature red, white, and green lights that drape from nearly every porch and hang from nearly every tree.

During last year’s annual lighting ceremony, she and her husband, Paul, stood on the front lawn of the YMCA and accepted the keys to the town and honorary citizenship. The Newnhams, you see, don’t live here. They live in Crawley. No, that’s not just outside of Littleton. It’s just outside of London. As in England. They came over in 1998 wanting to experience a genuine American-style holiday. They’ve missed only two years since.

“Yes, it is a long trip,” Lea says. “But it’s always worth it. When you see those lights for the first time each year, it gives you a tingle every time. It’s just magical.”

But to create the magic of December, there first must be the maddening processes of summer and fall.

The man in charge of this giant collection of wires and lights is Tim Gibson, head of the volunteer McAdenville lighting team. And, boy, does it take a team.

“Think about how knotted up your Christmas tree lights get while they’ve been in storage over summer,” Gibson says. “That’s what, one or two strands? Well, we’ve got just a little bit more than that here.”

Yes, just a wee bit more. Somewhere in the neighborhood of 450,000 bulbs in all, covering a total of 375 trees in carefully installed patterns that vary from 500 to 5,000 lights, depending on the size of the tree.

Volunteers test each strand. Lights get plugged in and flicked on. Any bulb that refuses to cooperate is immediately unscrewed and replaced.
Click. Buzz. Blink. Fizzle. Toss. Replace. Repeat.

Gibson and his volunteers do this work under the constant gaze of a distinguished audience. The onlookers are large in number, but not in stature. Most stand barely waist high. Among them are a perpetually saluting wooden soldier, Frosty the Snowman, and a quintet of holiday carolers. They are waiting to take up their posts throughout town. For now, they stare in frozen silence, as if to say, “Is it December 1st yet? You guys better hurry it up!”

By mid-September, Gibson and his crew are out in the streets quietly hanging the strands with quick, old-school efficiency. Two men use long, metal poles to hoist the first lines into the treetops and hang them vertically. Then a second wave of horizontal lines are draped one by one until the tree is covered in a spiderweb of wiring. When the lights come on, that impromptu netting vanishes beneath a seamless wash of lights. “It takes three months to get it all together and then three months to take it all back down,” Gibson says. “But it’s that month in the middle that makes it all worth it. I stand here and watch the kids all December. The looks on their faces, that’s worth it all.”

Some longtime residents say the birth of Christmas Town USA happened in the early 1950s when a group of five men fashioned a giant “Merry Christmas” sign from metal piping and placed it on the hill above the volunteer fire department along the lake. Others claim that the first case of exterior illumination was a solo effort in front of McAdenville Methodist Church. When a would-be Grinch stole the lights, a generous offer by William J. Pharr, owner of the local textile mill, to replace them led to the sprouting of lights all around town. Still others insist that the original tree motif, the pattern that all others have been modeled after, actually debuted in front of the headquarters of the mill before 1956. And a final notion is that the birth of Christmas Town USA came in 1956, when members of the local Men’s Club, most of whom worked in the textile mill, decorated nine trees in front of the McAdenville Community Center.

But no matter which origin story one believes, the perpetuation of the lights leads back to one man: the mill owner.

“Mr. Pharr was so much more than the typical mill owner you might know from other mill towns in the Carolinas,” says Mel Collins, unofficial spokesman of Christmas Town USA and vice president of human resources at Pharr Yarns, still the town’s largest employer.

Pharr was inspired by the efforts of the men to beautify the town at Christmastime. Dick Robert, who was a member of the Men’s Club and a Pharr employee, recalls Pharr’s call to action: “He said, ‘Boys, I’ll pay for all the decorations you can put up.’ So we’ve been putting them up ever since.”

And so, house by house and tree by tree, the decorative lights began to spread. So did word of what was happening in the little-known town just west of Charlotte. Soon the cars started rolling through. With each year, there were more lights and more visitors. And, as promised, Pharr picked up the tab, including paying the escalating power bills.

Even now, years after Pharr’s death in 1981 and after his company spread into offices as far away as California, the mill has managed to maintain roots in the community during an era when so many other Southern mill towns have lost their factories and the identity that came with them. The strongest of those roots is still a strand of Christmas lights. And Pharr Yarns still underwrites it all.

“It was always such a personal event for them both,” says Catherine Ann Carstarphen, daughter of William and Catherine Pharr. “They knew how the holidays could create a real sense of community. And they were so dedicated to maintaining the true spirit of Christmas. They wanted to make sure it never became commercialized.”

Especially Mrs. Catherine, as townspeople called Pharr’s wife. It was the First Lady of McAdenville, as they also called her, who wanted the town to stick to the traditional red, white, and green lights, which it still does. On the eve of every December 1 lighting ceremony, she would conduct a personal inspection with Wayne Teague, a Pharr employee who oversaw Christmas operations for nearly half a century before handing over the job to Gibson. They would examine every tree and then pay special attention to what is still a visitor favorite, the nativity scene that sits atop a sand dune by the Baptist Church. “They would be out there for a long time,” says the Pharrs’s daughter, chuckling. “It might be a couple of hours, moving Mary and Joseph and the manger a few feet here and there until they got it just right. Wayne was very patient with her.”

After a trip to Europe — most place it in the late 1950s — the Pharrs brought back another idea. They instituted a Yule Log parade and lighting ceremony for the start of every holiday season. The log is placed on a wagon and pulled down Main Street by dozens of local children, their parents frantically trying to keep up, to the Community Center. That’s where William Pharr would light the Yule log on fire. Now the center is Legacy Park, where a more modern lighting ceremony takes place, and Pharr’s grandson, Bill Carstarphen, welcomes guests. With the help of a lucky student chosen from McAdenville Elementary, they throw the switch, an entire town applauds, and for 26 days McAdenville becomes Christmas Town USA.

Catherine Ann Carstarphen, now 84, beams when she talks about her parents and their lasting, glowing legacy. She recalls how her father, grandfather Robert L. Stowe, and uncle Daniel Stowe, purchased the McAdenville Mill in 1939. When they reopened the shuttered building, it saved the town founded in 1881 by its namesake, Rufus Yancey McAden. Three years after opening his McAden Mills, the former state politician and post-Civil War bank president splurged on a curious new device for the factory. It was a Thomas Edison generator, one of only a handful in existence, and connected to it was one glass bulb, less than five years removed from Edison’s first public unveiling in Menlo Park. When word spread that it was in McAden’s mill, people began showing up from all over the Carolinas for no reason other than to gaze at the lone electric candle.

“It’s pretty amazing that happened way back when it did, isn’t it?” Gibson says, reacting to a story he’s heard more than a few times before. Then he curls his lip into a little smile.

“It was a little easier to set that show up, huh?”