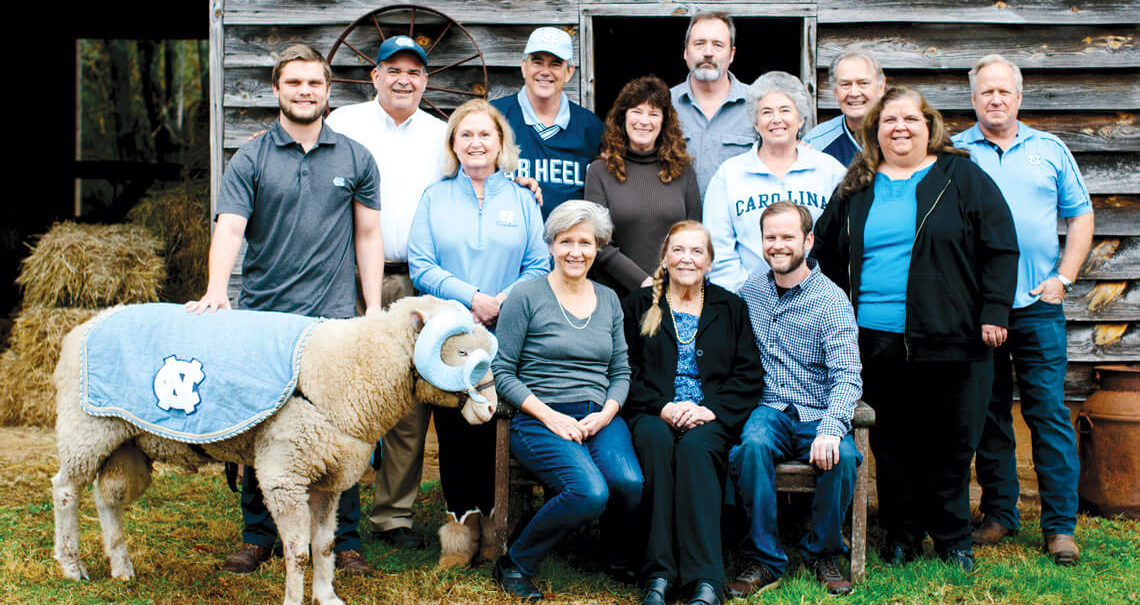 On nights before a big game in the 1970s, 12-year-old cousins Rob Hogan, Chris Hogan, and Don Basnight took turns staying awake. They stacked hay bales in the barn loft, where they had a good angle to shoot a BB gun over the sheep pen. “I learned you could screw the end off the barrel, and it would look like a for-real shotgun,” says Don, one of several fourth-generation caretakers of Rameses, the Horned Dorset mascot of the University of North Carolina at Chapel Hill.

The graveyard-shift protection of Rameses from rival teams plotting to ram-nap him is a serious part of the job description for the Hogan family, which has been caring for the mascot for nearly a hundred years. Caretakers have guarded him well: The Wolfpack, Pirates, Blue Devils, and Deacons have only pulled off about five successful ram-nappings in 50 years. (Rameses was always returned safely, albeit with horns and wool of a different color.)

Susan Hogan, Don’s cousin, recalls a story from the 1930s, when Duke fans stole the ram. Henry and Glenn Hogan, Rameses’s original caretakers, piled into a truck and headed to rival turf to find him. “They were sneaking around the campus and about to give up,” Susan says. “Finally, one of them said, ‘Why don’t we just call him?’ They called the ram, and he busted out of a little storage room and ran right over to them. The rams just know our voices.”

Every autumn, a few hours before home games, family and friends gather at Hogan’s Magnolia View Farm on Old NC Highway 86, just as they have for decades. Picking burrs and twigs from Rameses’s thick wool, Don and his nephew Henry Hogan have to work together to brush and bridle the rambunctious ram. “We use Woolite to wash him, mainly to cut down on shrinkage,” Don says. “Then we use the currycomb until he looks good enough to go to town.”

Susan makes sure everyone gets a turn painting the mascot’s horns with a fresh coat of Pantone 542 C, or “Hogan Blue,” as the local hardware store renamed it years ago. They dress him in his monogrammed blanket, quilted and custom-made for every ram since 1953 by the family matriarch, Carolyn Hogan. 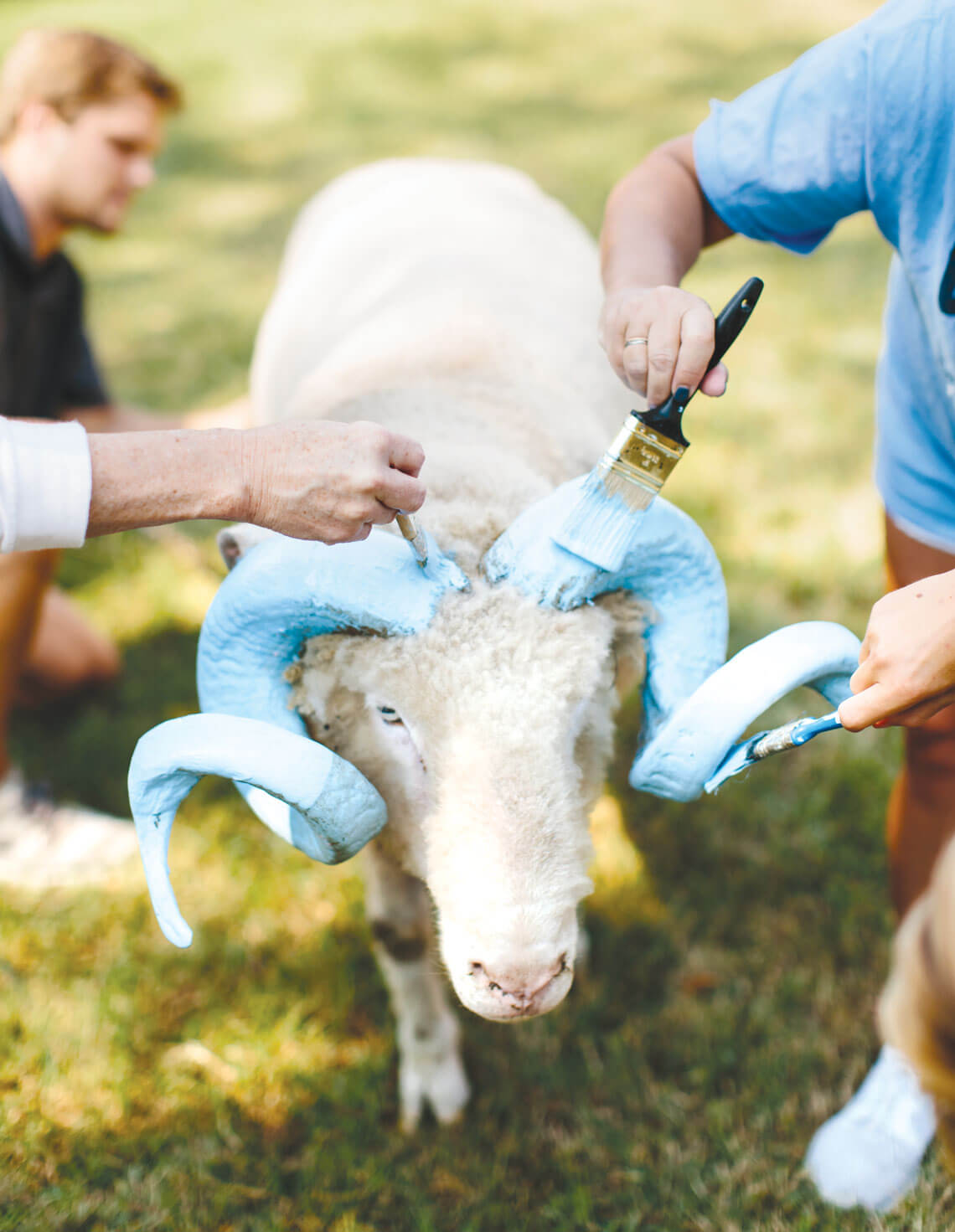 Don adjusts the blanket’s elastic strap around Rameses’s neck. “This is the Carolina end,” he says as he pats the animal’s head, “and that is the Duke end,” he jokes, grinning as he glances toward Rameses’s rump. The ram snorts, swinging his heavy head. The 6-year-old alpha male, though seasoned and socialized, still bears heavy horns and hooves and a big dose of attitude. “Once he’s on the chain,” Don says, “he’s like, ‘Let’s do this!’”

Hogan family memories merge with archived articles from The Daily Tar Heel and captions from the Yackety Yack yearbook to preserve the story of how the ram became UNC’s mascot. Head cheerleader Vic Huggins of Hendersonville, class of 1925, convinced Athletic Director Charlie Woollen that the university needed a live mascot, like its rivals. He argued for a ram in honor of Jack Merritt, the “hard-smashing fullback” who was known as the football team’s “battering ram.”

At the time, Don’s grandfather Henry Hogan, who had been an offensive lineman for UNC, lived within walking distance of campus. When the first Rameses arrived from a Texas ranch, Henry took him home, and Rameses “has lived on the farm ever since,” Don says. “Well, not the same one, of course.”

Rameses debuted at the homecoming game against Virginia Military Institute in 1924. The game was tied 0-0. Quarterback Bunn Hackney rubbed the ram’s head for good luck and dropkicked the ball. The winning field goal scored a timeless love affair between the Tar Heels and Rameses that thrives to this day.

During the 1930s, two lucky UNC students were secretly selected to serve each home-game day as “Mighty Allahkahoozas, E.C.R.R.” (Eminent Custodians of the Royal Ram) and “Chambermen to His Royal Highness.” All the other days of the year, Henry’s brother, Glenn, became known by the town and gown as “the ram guy,” until the ’60s, when his nephew and a family friend took the reins.

The rams typically go on active duty at 2 years old, when their horns mature and curl, and serve for three to five years. Many believe the myth that all 21 rams that have served as UNC’s mascot descended from the original Rameses. But while they are very prolific, the rams sired by a reigning mascot haven’t always passed the public relations test. One ram, Bam Bam, never made it out of the barnyard. “He wasn’t mascot material: His horns weren’t equal, his teeth were crooked, and his haunches were awkward,” Don says. “Plus, he was mean. You cannot take a mean, 200-pound ram nicknamed Bam Bam out into the public to be petted by city folk. Ram is a noun and a verb.”

A family friend hitches Rameses’s trailer to a black Dodge Ram, and it’s time to head to campus. For nearly a century, this no-frills, single-pickup parade from the farm to Kenan Memorial Stadium has turned heads and warmed hearts every autumn. Football fans line Franklin Street, smiling and shouting the moment they recognize the ram in the trailer. Sometimes, they lunge across lanes of traffic, attempting to capture the ultimate Tar Heel selfie.

The ram still charges the air with an energy that hearkens back to an earlier era and is hard to define, an energy that transforms fans into something that feels more like family. UNC grew up with Rameses, all because the Hogans kept vigil on the hill. 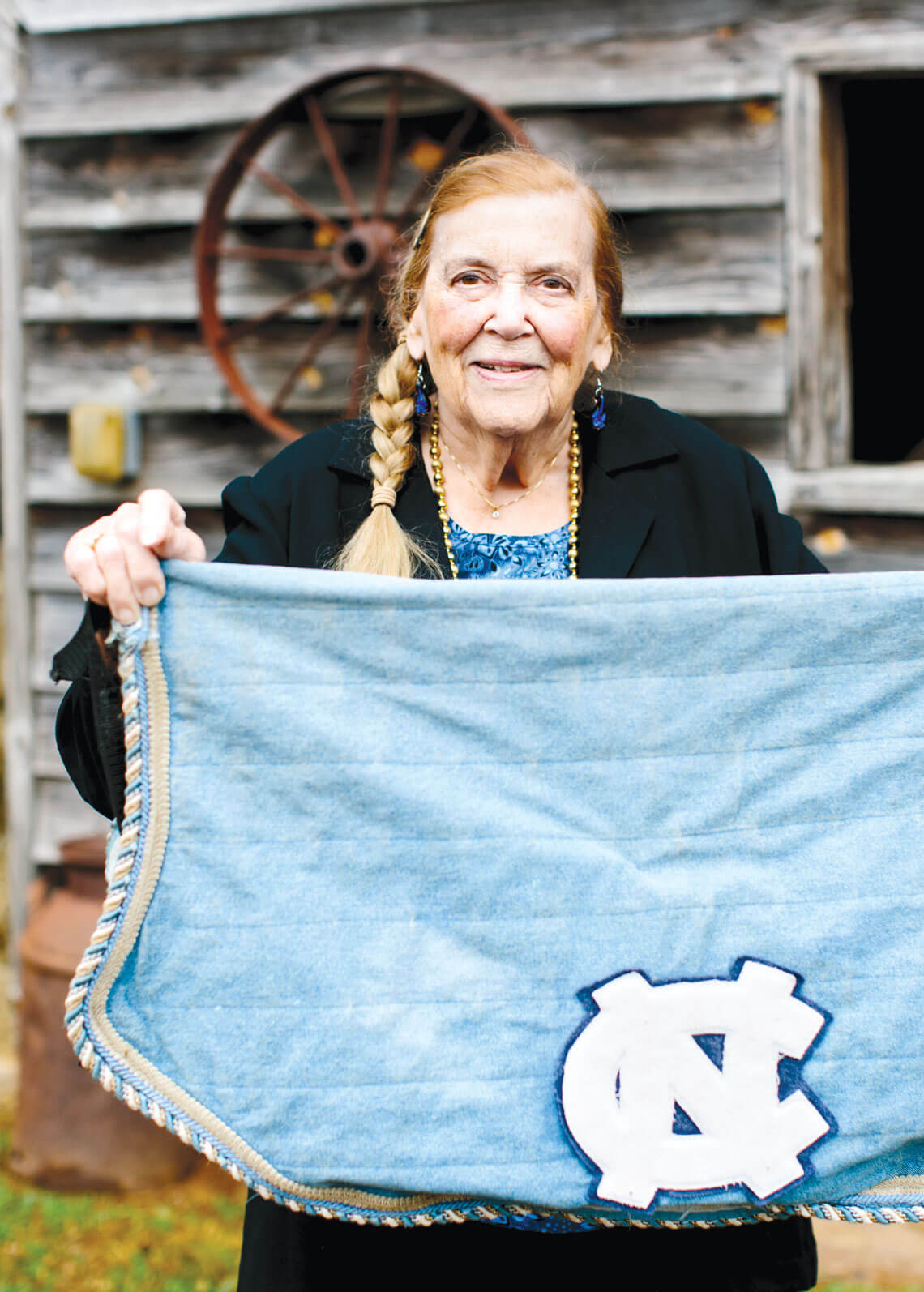 The finishing touch is a UNC blanket made by Carolyn Hogan. photograph by Anagram Photo