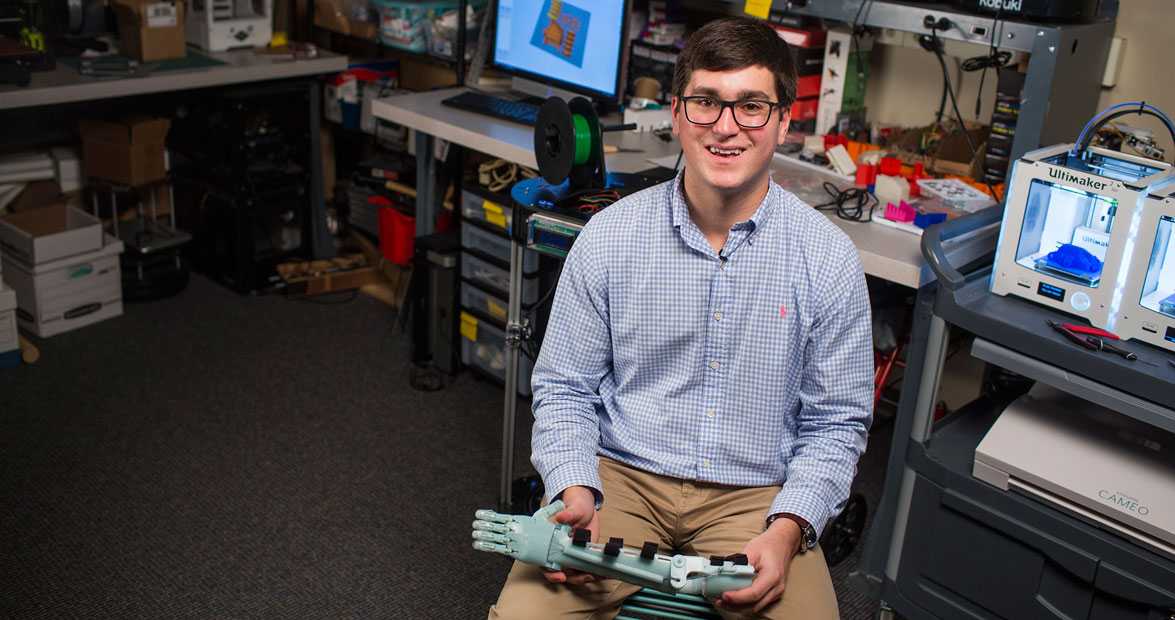 Jeff Powell had his doubts.

Would Holden, a little boy who was born without fingers on his left hand, and his family be disappointed with the prosthetic hand Powell had created for him? It was Powell’s first attempt at making a 3-D printed body part, after all.

Finally, after a summer of researching and testing prototypes, it was time. Powell took a deep breath, looked over the prosthetic one last time, then presented Holden with the new hand.

It was a life-changing moment for both the giver and the receiver. For the first time, young Holden could grasp and lift things with his left hand — his hand, one that Powell had fashioned just for him. Holden looked up with the sort of smile only a grateful child can produce, and Powell knew.

“He showed me that this was a project worth pursuing,” Powell says.

Holden has a congenital limb abnormality called symbrachydactyly, but Powell prefers the term “limb difference” to describe the community of kids with this condition. Powell’s organization, The Helping Hand Project, assists these children by providing 3-D printed prosthetic devices to them at no cost. It also offers a much-needed support system for their families.

Powell’s introduction to the limb difference community was more serendipitous than deliberate: Four years ago, he was a junior in the biomedical and health sciences engineering program at the University of North Carolina at Chapel Hill and was looking for a new extracurricular to further build his skills.

“I wasn’t looking into prosthetics or being a prosthetist, but I was really interested in design,” Powell says. When one of his professors connected him with Holden’s family, who had approached the university about creating a 3-D printed prosthetic device for Holden, Powell jumped at the opportunity.

Holden and his family were thrilled to see the final product; so was the media. The statewide, and national, attention was incredibly flattering for Powell, but it was the feedback from other families that truly moved him. Messages trickled into his inbox from parents saying, “Hey, we’ve been trying to get our child a similar device for a year and haven’t had any luck,” and, “Our child has no interest in using a traditional prosthetic device but thinks your ‘robot hands’ are extremely cool.”

Maybe, Powell thought, this could be a larger endeavor, something that brings smiles to other children like Holden. And with that, The Helping Hand Project was born.

The Helping Hand Project is made up of four volunteer-driven chapters across the state, each with specialized tasks: the University of North Carolina at Charlotte’s primarily builds prosthetic arms; UNC Chapel Hill’s fosters the support network; North Carolina State University’s focuses on custom designs; and Durham Technical Community College’s studies how to improve the devices’ comfort and wearability. It’s a true statewide effort.

Through the organization’s work, Powell is challenging the perceived dichotomy between art and science. “Combining the two allows us to have uniformity in our processes, yet gives us the freedom to make the devices in a way that’s best for each child,” he says. “There’s a lot of technology that’s involved — computer-aided design programs, slicing software, 3-D printers — but during the assembly process, some of those steps are a little less defined, so parts of it really are an art.”

The Helping Hand Project works with an online 3-D printing community to find the appropriate design for each request. But every child is unique, and for some kids, existing designs just don’t fit. If that’s the case, Powell turns to his volunteers majoring in engineering to make modifications. After 20 hours of printing, builders spend two hours creating the finished product: a hand that can open and close.

A traditional cosmetic prosthetic arm and hand runs a couple of thousand dollars. If you include a hook at the end to make it functional, the price can soar to $10,000. Meanwhile, The Helping Hand Project can make an elbow-powered arm for $40, and a wrist-powered hand for even less. “Children often don’t receive prosthetic devices because the amount of time and money it takes to get a device for a growing child — who may need a new one every year — is cumbersome,” Powell says. That’s why The Helping Hand Project gives its devices to families for free. And if the child hits a growth spurt, it’s no problem. Give the volunteers a few weeks. They’ll make another.

Cost isn’t the only factor that makes the 3-D printed prosthetics attractive to families. The devices are also lightweight and can be customized to each child’s interests. During the fidget spinner frenzy, for instance, Powell was able to accommodate a request to attach one to a child’s device. In December 2017, the organization designed a Carolina Panthers-themed arm, which former running back Jonathan Stewart had the team autograph.

Designs aside, the true power of a “helping hand” is evident in the children’s newfound confidence. Several of the kids whom Powell assists have dealt with bullying over their limb differences; even more are self-conscious about their condition. Thanks to The Helping Hand Project, children can feel more like Iron Man than Captain Hook when they slip on their “robot hand,” which Powell hopes will set them up for a happier future with prosthetics.

“Our recreational devices benefit children, but we don’t intend for them to replace traditional prosthetics,” Powell says. “Our hope is that by kids being more excited and comfortable about our prosthetic devices, they’ll eventually be more accepting and better able to use traditional ones.”

For Powell, The Helping Hand Project is rooted in more than a love of tinkering. “Every maker has that bit of curiosity to want to learn more about the world, and that desire to create something that will add to the world,” he says. He also appreciates the significance of the project’s efforts. In January, The Helping Hand Project donated a device to its 30th child — a huge accomplishment. Every device the organization builds gives hope to the families about prosthetics advancements that may occur in the future.

“The Helping Hand Project allows makers who want to create products that impact someone else’s life to have that experience,” Powell says. “A lot of people in their 20s want to help out, be a good person, and do good for others, but they don’t know the avenues to do so. I still love delivering the prosthetics — each smile I see means as much as the last — but now I let other volunteers do it so they can also experience that sense of fulfillment.”

To learn more about and donate to The Helping Hand Project, visit its website here.