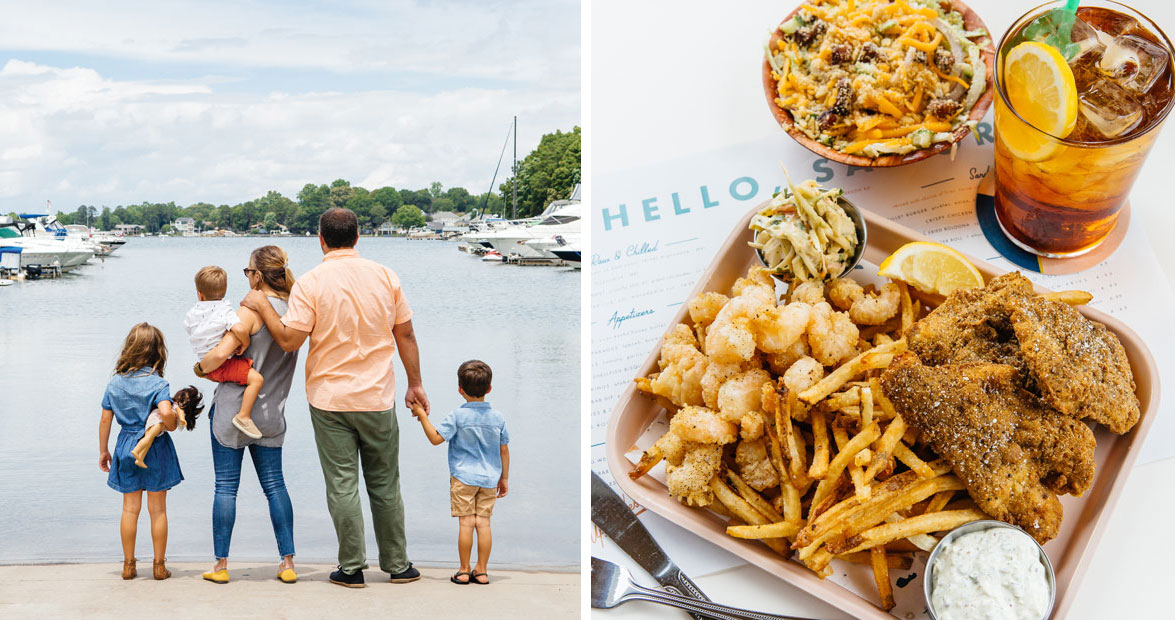 Joe Kindred used to come here by boat as a boy. This was in the late ’80s and early ’90s, here in northern Mecklenburg County, up Interstate 77 from Charlotte, back when the area around sprawling Lake Norman was still all empty lots and quiet coves, dirt roads and red clay. Back when practically the only restaurants around were a Quincy’s and a Pizza Hut and something called Ham and Eggs where the McDonald’s is now.

Back then, Joe spent slow, untroubled days riding his bike and jumping into the bracing water of a rock quarry, tubing and water-skiing, eating peanut butter on white bread and dipping potato chips in ketchup or ranch. Friday nights meant a short boat ride from where the Kindreds lived on the lake in Cornelius for family dinners out at an unfussy, fish-campy, breading-and-baskets eatery named Harbor Lights.

That was back before his parents got divorced.

Now, seated at a table on the deck of their still-new second restaurant, Hello, Sailor, which replaced the Rusty Rudder, which replaced Harbor Lights, Joe and his wife, Katy, look out at the lake.

“My memories here,” Joe says, “are some of the only good memories I have of my parents being together. Because they split when I was like 8 or 9.”

He’s 35. He’s husband to Katy and father to Alba, Luca, and Graydon. He’s a three-time James Beard Award nominee for best chef in the Southeast, and he and Katy and their restaurants have earned national renown. And he’s still the boy that he once was. 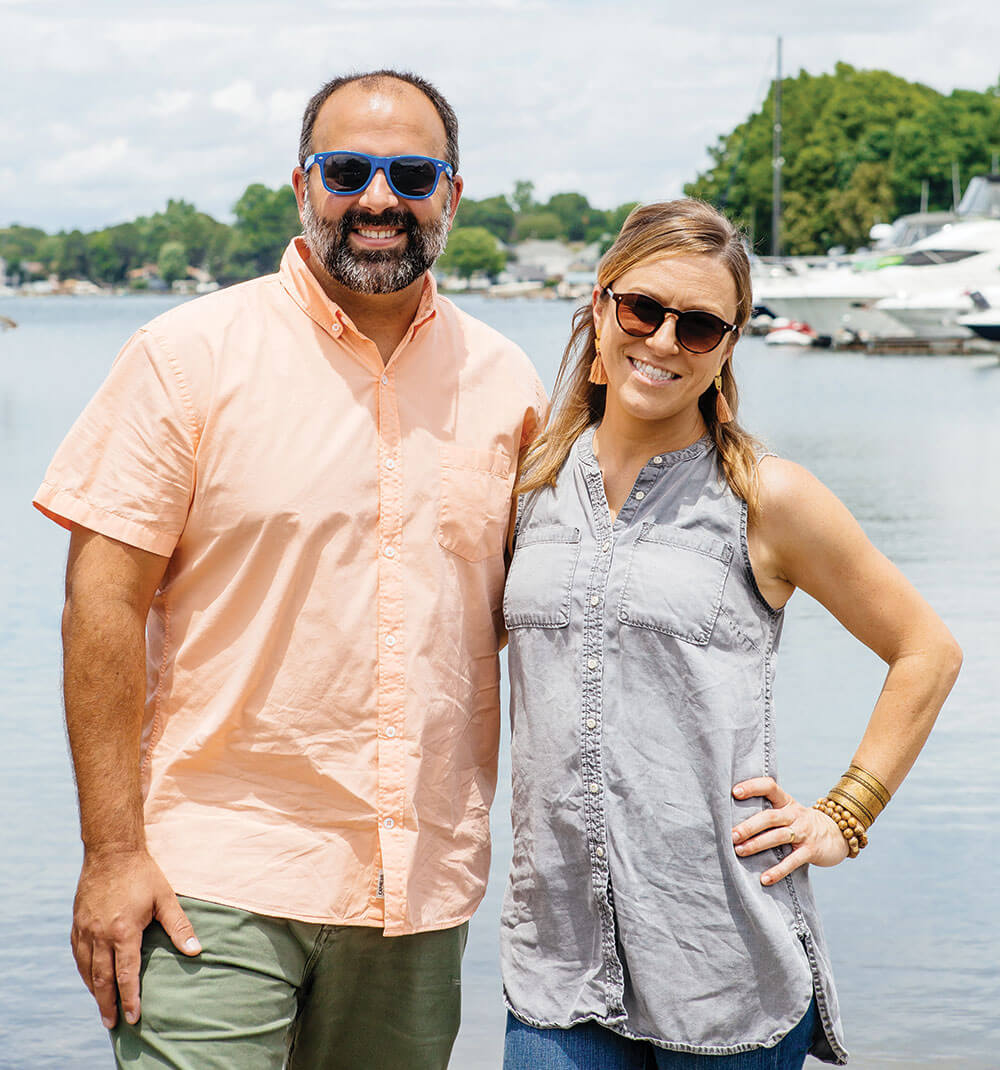 “I remember standing down there on that little platform, feeding the carp, feeding the ducks, eating hush puppies and fried bologna sandwiches,” he says. Salt-and-pepper catfish. Popcorn shrimp. And then … “This whole thing got taken from me,” he says. “There’s a lot of heart here. A lot of memories.”

It’s the middle of the afternoon. The lake is still.

The Kindreds are here because they wanted to make a home: Joe, the country kid with the soft drawl and the informal demeanor, learning by doing, and Katy, young but already an acknowledged, accomplished sommelier. They worked at the Pump Room in her native Chicago, then she worked at Quince and he worked at Delfina in San Francisco, both sought-after spots on the culinary scene. But they wanted to start a family. And they weren’t sure that big, busy, expensive cities were the best places to do it. So they moved back to the lake and bought a fixer-upper bungalow in Davidson. And in February of 2015, on Main Street across from the campus of Davidson College, in a storefront that once was the town’s pharmacy and then a quirky little museum known mostly for its sculptures of gnomes, they opened the first restaurant of their own. Kindred. Family.

Kindred’s high tin ceiling and exposed brick walls created just the right mix of warm and cool. Precocious but not precious. Sophisticated but not stuffy. A special-occasion spot with a shot of Cheers. And the food. The food! Comfort food of the South meets haute cuisine of the world. The handmade squid ink pasta. The whole Appalachian trout. The crispy oysters with dill yogurt and a zing of chili oil, the little gem salad, and the duck-fat potatoes — the standard-bearer of fries. Cocktails concocted by smiling bartenders with hipster mustaches. And the milk bread. The milk bread! Intentionally evocative of the yeast rolls that Joe used to gobble up at that Cornelius Quincy’s, a memory brought back to life and made better — literally just bread and butter, only somehow injected with complexity and verve. Served gratis. Kindred was a hit. 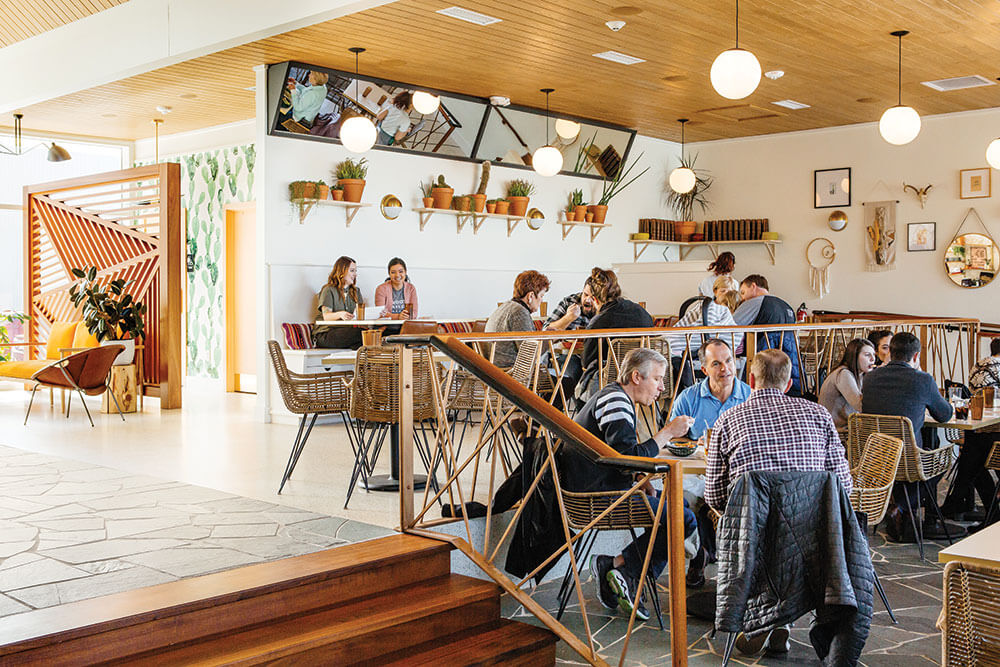 Bon Appétit called it one of the 10 best new restaurants of 2015. “Imagine,” the magazine said, “a casual Southern restaurant that studied abroad.”

And so the Kindreds started to dream even bigger. “There will never be another Kindred,” Katy explained to Charlotte Business Journal in 2016. But they did start “toying around” with ideas for a second restaurant, Joe says. Something different. Pizza? Pasta? Something else? Something down in Charlotte, almost certainly. It had to feel right. Like Kindred did. But Kindred was keeping them plenty occupied, and they had three kids, too, and their youngest was a baby. They were in no hurry.

Then, they heard that the lease on the Rusty Rudder was up, and the restaurant planned to close after 15 years. An available lakefront space. Just like that.

But Katy wasn’t sure. “Full disclosure,” she says, sitting on Hello, Sailor’s deck, the sun shining. Inside, a smattering of diners linger at tables and on stools at the bar. She pauses, thinking about how much she wants to say and how she wants to say it. “I’ve always had reservations about taking over an existing restaurant space,” she admits, “especially one that’s been around for that long.” Because? “There are always going to be people who are strongly attached to the place.” There’s no clean slate. No fair, uncolored first impression. Whatever the place becomes, it’s not quite what it was.

But maybe Joe could have it both ways. He wanted to do it. Had to. Heart even more than head. “I started having those memories,” he says, looking out over the water, toward the house where he grew up. Those Friday nights. His parents together. “The lake was so important to me,” he explains. “And I thought it’d be really neat to plant some roots here, with my wife and for our children.” Those quiet coves. Those fried bologna sandwiches.

It hasn’t been easy. Hello, Sailor, as Joe and Katy often say, is like a mash-up of a “fish camp 2.0” and a Palm Springs oasis: 4,000 square feet inside — open and airy, bold colors and curves — plus another 3,000 square feet outside, including a triple-tiered patio, a tiki bar, and 20 boat slips. A working photo booth adds a playful touch. With Katy leading the charge on design, they vaulted the ceiling and added more and bigger windows, all to accentuate what they consider the very point of the place. “We want your eye to be drawn straight to the water,” she says. The lake.

But the view has little to do with all the national press attention that Hello, Sailor has received, some even before it opened. That was all reputation. Talent. The food. 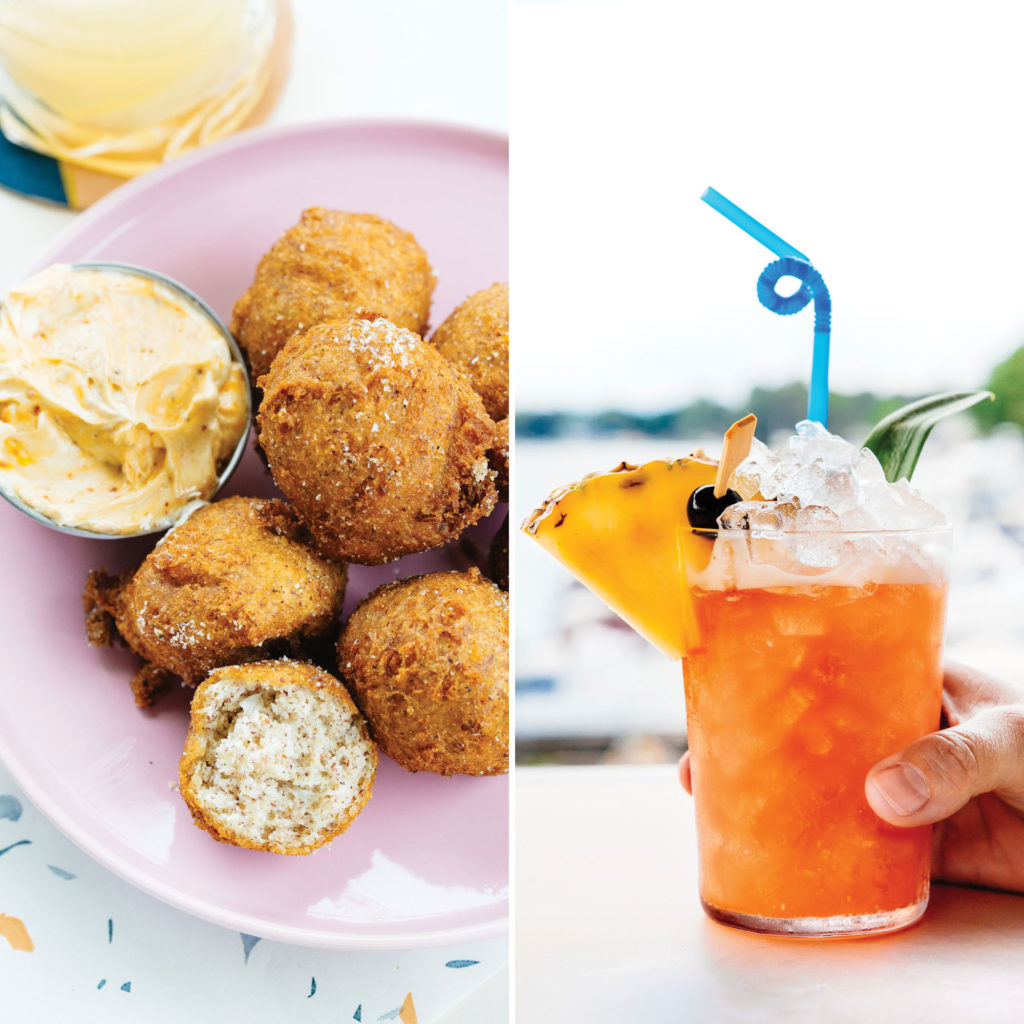 The menu feels like a seriously gussied-up fish fry — blue crab claws with wasabi tobiko mayo, a lobster roll served on that delectable milk bread from Kindred, classic salt-and-pepper catfish but with sauce gribiche, deviled crab drip with pimento cheese — executed by prominent Charleston chef Craig Deihl, who was lured by the Kindreds to Cornelius to be the restaurant’s chef de cuisine. There’s a skillet burger, too, and baby back ribs and creamed collards and an iceberg wedge and a fried bologna sandwich on a poppy seed-coated bun and scene-stealing hush puppies — a little less cornbread, a little more beignet — served with yuzu kosho honey butter. There’s a beer made exclusively for Hello, Sailor by Free Range Brewing in Charlotte: Barracuda Bill’s pilsner, named after Joe’s spearfishing granddad. And there’s soft-serve ice cream and homemade hand pies.

Even so, bringing people around to a new incarnation of an old standby takes time. At first, diners vented about the transformation on Yelp, but chicken wings and tasty cocktails may make converts of them yet. “Once this place takes off,” Joe vows, “it’s going to be fun.” A bowl of squid, clams, and a hunk of succulent pork belly hits the table with a substantial thud. Silverware clinks. The food critic from GQ magazine dropped in not too long ago and left raving about the gumbo he ate in “a fantastical mid-century modern surf shack located on the shore of Lake Norman.”

Downstairs, hanging on the office wall, is a framed menu from Harbor Lights — fish camp 1.0: fried shrimp, fried oysters, fried scallops, fried catfish — with a handwritten note to Joe from the owner. “Your family were regulars,” it says. “Carry on the Lake Norman family restaurant tradition. Good luck!”

So much has changed. What’s most important has not. And Joe and Katy have set up a life to give their children what Joe had and then didn’t: a childhood on and around Lake Norman. Live music on Friday evenings behind the coffee shop in Davidson. The Saturday morning market. Mondays in the pool at Joe’s mother’s house in Cornelius — “Mondays at MoMo’s,” they call it. And now this, too. Hello, Sailor. Joe and Katy can see the past and the future from the deck. Tables of families eating hush puppies and soft serve. Boats pulling up to those beckoning slips on warm Friday nights. “Kids and families on the water,” Katy says, “making memories.” Joe is quiet. He just nods his head. Yes.