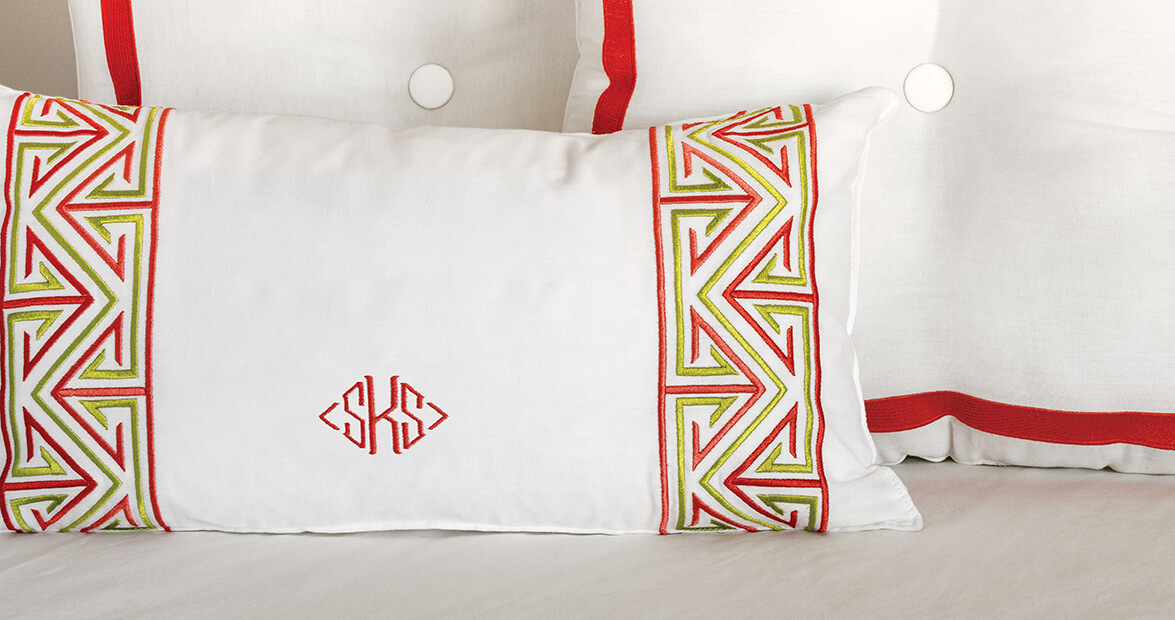 Here’s how my godmother got engaged: On a postgraduation trip to New York City with friends, she was in Saks Fifth Avenue and decided to buy a set of towels. This was the early ’50s.

“Would you like the towels monogrammed?” the saleslady asked.

Yes, my godmother thought, she would.

“What are your initials?” the clerk continued.

My godmother then turned to her feet-dragging boyfriend and said, “Maiden or married?”

Reader, she married him. Such is the power of a monogram.

Monogram historians — they exist — will tell you that monograms have been around since B.C. times. Romans were stamping their currency with the initials of whatever dictator — I mean emperor — was wearing a toga. But the ruler most often credited with establishing the monogram is Charlemagne, King of the Franks from 768 until 814, who marked military conquests with his initials to indicate power and dominance, even if his conquests didn’t speak his language, or use his alphabet. Any movie- or museumgoer has seen the pennants and banners and breastplates and whatnots of kings and queens that bear initials and trefoils and antlers proclaiming their status and stature. Peasants couldn’t afford all that golden thread.

But monograms didn’t make it across the Atlantic with the Puritans. They were too pure for such show-offy displays of filthy lucre — unless you were Hester Prynne and her scarlet A, and that was not a look to be coveted. Thus the royals, those rapscallions everyone loves to simultaneously hate and emulate, are responsible for the trend that ensnares so many — especially in the South. And thus did monograms morph into an aspirational look, one that says, See? My initials are on my duffel, duvet, and doormat. Ergo, I have a pedigree.

Growing up in Rutherfordton, my only experience with monogramming was at the county fair, where a barker would etch your initials on a pseudo-silver disc with an electric pencil while you stood by in the sawdust. Four days later, the chain was broken, and the initials had basically rubbed away. But in the ’70s, when the preppie look ran amok, I got serious about monograms. Monogrammed towels. Monogrammed collars. A gold pendant with my monogram cut out. A wood-handled pocketbook with changeable fabric covers of corduroy and pique, all monogrammed. If not for monograms, I’d have had nothing to endlessly doodle in algebra notebooks, with graceful swirls and curlicues. Plus versions if I were to marry whomever I was currently enamored with.

To the first serious college boyfriend, I gave a set of — naturally — monogrammed rocks glasses, believing the gift to be the absolute height of sophistication, yet satisfying my mother’s none-too-subtle suggestion that I not give him anything “too personal.”

Like that monogrammed cummerbund I needlepointed for his birthday.

Because, lest you think the mono phenomenon is limited to females, it’s just as bad — I mean prevalent — for men. Briefcases. Belt buckles. Luggage. Golf club covers. Shirts. (True statement from a dapper male friend from Burlington about shirt monogram placement: “Three buttons down on the left but four buttons down is dressier.” You can’t make this stuff up.)

The impulse to monogram is so strong and deep-seated that, for a number of years after I got married, my mother gave me monogrammed items. I thought she’d gotten my initials wrong, until I realized the monogram she put on my napkins and my pillowcases was hers.

Will Rogers said, “I never expected to see the day when girls would get sunburned in the places they now do.” The same can be said for monograms. Initialing begins in the crib, with monogrammed diaper covers, progresses on to hair bows, then to kindergarten backpacks, and so forth. Nowadays, there’s nothing you can’t slap initials on. Covers for iPads. Coolers. Koozies. Cars.

Any fool, though, knows not to monogram flat silver. In case of divorce, you can pitch the monogrammed ice bucket without regret, but not the sterling. Of course, no one bothers with flat silver anymore, so that’s a relief.

Speaking of pitching, my sister had a solid gold monogrammed cuff bracelet that, not long ago, she tossed on a jeweler’s scale to trade for hard cash.

Clang! went the cuff on the scale. Melting and monogram erasure ensued.

My other sister once lined all of her monogrammed notepads end to end on the floor, and reported gleefully that they stretched from the kitchen table to the front hall stairs. Callous creatures, both of them. You couldn’t wrench my monogrammed stationery from my fingers, the beautiful, expensive, blue-on-blue notes that were part of my trousseau. Thirty-six years later, trousseaus are extinct, and I’m still saving the stationery. I don’t know what for, but I’m saving it. Something will come up.

Otherwise, I’ve grown out of monogramming. The fetish exhausted itself for me, lost its grip and its charm. Maybe because a roommate from Pink Hill had no middle name and couldn’t partake in the madness, through no fault of her own. Maybe because my aforementioned godmother informed me that if your monogram spells a name, you’re forever lucky, and mine doesn’t. Maybe because I occasionally glance at frames on a bedroom chest, monogrammed at the top and dated at the bottom — SFS 6/4/76 — and think, Hmm. What happened then? Somebody’s wedding? Someone’s graduation? Mine?

But the trend rages on, this club that anyone can join. The ubiquity of monograms bears more than a passing resemblance to something my father used to quote from his stint in the Army: Move it, salute it, or paint it green. Here’s an apt monogram for that phase of my life: R.I.P.

At least it spells a word.

This story appeared in print as “Letter Perfect.”