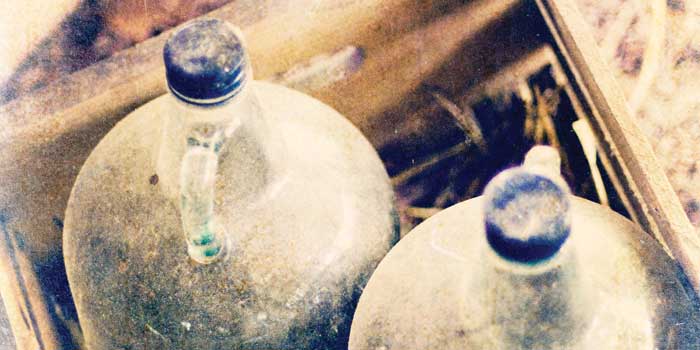 I know a guy who knows a guy.

It took 25 bucks and the sense not to ask any questions. We made a discreet transaction at the end of a party. I bootlegged it home in the trunk of my Toyota. One quart of homemade peach moonshine — North Carolina in a jar.

We’ll talk more in a second. But first, take a sip.

Don’t gulp it — you’ll be spitting and snorting half the night. Just let a little bit slide between your lips. That peeled peach, looking like Mars floating around in there, sands off some of the hard edge. You might even taste the fruit first. But right behind it comes the fire. It’s not a big roaring flame like the old days — that old 140-proof white lightning is hard to find anymore. This is more like 80. Like a big stack of oak burned down to the coals.

That taste, right there, helped build our state. It helped define our history. It helped create our most famous export.

And today, it still thrives.

In the town of Madison, north of Greensboro near the Virginia line, two giant oak barrels crowd one end of a long, narrow room in the old train depot. Each barrel is filled with 135 gallons of mash — a mix of corn, yeast, and water that’s been fermenting for three days. It looks like thin buttermilk and smells like wet grass clippings. Some old-timers call it beer and drink it just like this. But this mash is headed for the still. And this particular still happens to have government permits.

It belongs to Piedmont Distillers, which began making moonshine for commercial sale in 2005. Its two brands — Catdaddy and Midnight Moon — are now sold in 32 states. On a recent weekday morning, while the mash aged at one end of the room, workers packed fresh raspberries into finished ’shine at the other. You can now get Midnight Moon in seven fruit flavors.

The pots in Piedmont’s main still are made of stainless steel, instead of the copper in the typical backwoods still. And these pots are big — the main vessel holds 500 gallons, where a regular still’s pot might hold 50. But the process is about the same as it ever was. The mash goes into the main pot and cooks to 173 degrees — the temperature at which alcohol vapors start to boil off. Those vapors are piped into a second pot, called a thumper keg, where they cook again to get rid of impurities. Then the vapors go into a condenser, through spiraled copper tubing (the worm) surrounded by cold water. The cold turns the vapors back into liquid. Hold a jar under the spout, and soon enough, you’ll get moonshine.

Brian Call, the master distiller at Piedmont, traces his family back to Dan Call, the man who taught Jack Daniel how to make whiskey. The trade has carried through several generations — Brian’s dad partnered in the moonshine business with Junior Johnson, the legendary NASCAR driver who smuggled moonshine out of Wilkes County. “My dad got sent to prison for whiskey,” Brian says. “It’s a lot easier to do it the legal way.”

Johnson is a partner and shareholder in the distillery, and his name is on the Midnight Moon bottle. But the guy behind the operation is a New York native named Joe Michalek. He moved to North Carolina in 1995 to market tobacco companies. That meant a lot of races and a lot of music festivals. And at just about every one, he noticed, somebody would pull out a Mason jar.

“Some of it was terrible,” he says. “But some of it was so good I started wondering why nobody was making this commercially. So I started looking into it. And the deeper I got into it, the more I realized how much moonshine is a part of the Carolina culture.”

In fact, moonshine helped build what we think of as Carolina culture — especially Carolina mountain culture. Scots-Irish immigrants poured down into the North Carolina mountains from Pennsylvania and Virginia in the 1700s looking for cheap land and freedom from authority. Many brought the whiskey-making skills they learned across the Atlantic. And even teetotaler farmers figured out that corn was easier to haul to market — and brought a lot more money — in liquid form.

The problem was taxes. The new United States government decided to levy taxes on liquor in 1791 to help pay off Revolutionary War debts. Distillers fought back in a movement that came to be called the Whiskey Rebellion. The rebellion ended quietly three years later, with the government in charge, but the most determined moonshiners pushed back deeper into the woods and kept cooking.

Moonshine built legends. Amos Owens of Rutherford County, west of Charlotte, became famous throughout the South for his “cherry bounce” — a blend of corn whiskey, sourwood honey, and cherry juice. His operation made untold thousands of barrels from the 1840s through 1890, except for a stint during the Civil War. Moonshine made Owens enough money to buy Cherry Mountain, where the fruit for his bounce grew wild. It also got him arrested and jailed again and again. In his last court appearance, at age 68, a judge in Charlotte looked him over and said: “Amos, man to man, will you cease to violate the laws of our country and be an outcast of society?” Amos answered through tears: “Judge, I’ll try.” And he never made another jug. At least that’s how the story goes.

In some ways, the worst thing that happened to moonshine was Prohibition. Big-time criminals moved into the illegal-liquor business. Most didn’t care much about quality. And even some established moonshiners cut corners to meet the high demand. They skipped the thumper kegs and charcoal filters that got rid of fusel oils — the byproducts that give bad moonshine a solvent smell (and also cause wicked hangovers). Sometimes, they just didn’t pay enough attention. My daddy, who grew up in Georgia in the ’20s and ’30s, remembered running across a still on a hunting trip and spotting a dead squirrel floating in the mash. But once Prohibition ended in 1933, most of the short-timers cleared out, and most of the rotgut did, too.

(This is probably a good time to pause and acknowledge that moonshine is not sweet tea, and even the best of it is not to be trifled with. Alcohol abuse has ruined lives and broken homes. In all things, moderation.)

By the time Prohibition ended, moonshiners had traded their horses and wagons for cars. They modified the cars for whiskey hauling, hollowing out the interiors for storage, tweaking the engines for power. The ’39 flathead Ford, with ample room and a powerful V8 engine, became the moonshiner’s car of choice. Before long, between bootlegging runs, some folks decided to see whose car was fastest.

Jimmie Lewallen was one of those folks. Growing up around High Point, he delivered moonshine on his motorcycle, the cargo tucked in his saddlebags. By the late ’30s, he was racing cars, first in fields, then on dirt tracks. He went off to World War II and jumped back into race cars when he got back. He was one of the first drivers in what ended up becoming NASCAR. A bunch of NASCAR’s early stars learned their skills by outrunning revenuers. There’s a nod to that history at the NASCAR Hall of Fame in Charlotte — up on the fourth level, you can find a replica of one of Junior Johnson’s old stills. He put it together himself.

Jimmie Lewallen died in 1995. His son, Gary, thought his dad’s story might make a good movie someday. So Gary raised $600,000 and financed the movie Red Dirt Rising, which came out this year on DVD. It’s not a documentary, but it’s basically Jimmie’s story. And along the way, it’s the story of moonshine and NASCAR and North Carolina.

“Moonshine, for him, was about opportunity and money,” Gary says. “But also the chase, going out here running liquor up and down the road. There’s a group of people that have always been around North Carolina. … It’s right on the edge of being a bad guy, but not totally. There’s a twofold thing there. Always has been.”

Jimmie was out of the moonshine business by the time Gary grew up. And here’s that twofold thing: Gary went into law enforcement. He spent more than 30 years on the job, retiring as police chief of Archdale in 2009. Along the way, he busted up a few moonshine stills. He once found a still outside of Thomasville, got an engineer to put some dynamite under it, and invited a TV crew. It blew the still 100 feet into the air.

“I always told everybody I had three choices for a career,” Gary says. “Race. Run liquor. Or the police department. I got the one with the better retirement plan.”

History by the Quart

Making moonshine has never been an easy life. That’s part of the North Carolina story, too — people worked hard here, whether it was cropping tobacco or pulling the graveyard shift at a textile mill. Plus, of course, most moonshiners lived on the other side of the law.

“We wasn’t stealing — we was dodging,” Junior Johnson says. “Back when I was doing it, you could make a gallon of whiskey for a dollar and sell it for 3 or 4 dollars. But the government wanted 11 dollars a gallon in taxes. You couldn’t make no money that way.”

But now Piedmont Distillers is making a go of it. And up around Asheville, Troy Ball is about to give it a shot.

She and her husband — both real-estate developers — moved to Asheville from Austin, Texas, seven years ago. They bought some land in Madison County, met some people up there. Time after time, folks stopping by would bring her a jar to taste. She wouldn’t even try it at first. But then she took a sip that was so smooth, and she wanted to make it herself.

So now she does. She partnered with Highland Brewing Co., a craft-beer brewer, to build a moonshine distillery in Asheville. She uses heirloom white corn for the mash. And her plan is to have Troy and Sons Moonshine on the shelves this summer.

“What I found is that people will tell you their secrets about moonshine, as long as they know you’re not a threat to them,” she says. “These guys don’t just embrace anybody right off. But they’re proud of what they make. The world needs to know there’s such a thing as quality moonshine.”

That’s a fact. You can still get a drink of moonshine, legal or otherwise, that’s not a whole lot different than what they were drinking when this country was founded. There’s a lot of history in that jar. Go ahead, take another sip. It’s for sharing.