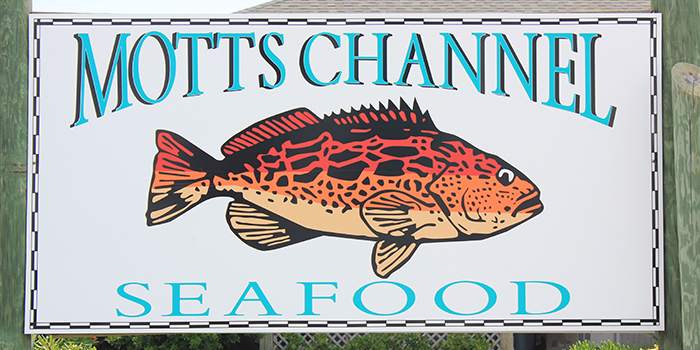 Finding the spot takes some work: head over the bridge, go behind the post office and past the dry dock, then turn and turn again. You’re there when you see the neon grouper light.

Its semi-secret location would make Mott’s Channel Seafood at Wrightsville Beach one of the best-kept secrets in town, but it’s top-notch seafood lures in too many hungry home cooks and restaurant buyers for it to be anything but well known.

On any given day, the doors to Mott’s Channel Seafood open at 8 a.m. But that’s long after the first wave of fishermen have arrived, sold them their overnight or early morning catch, and motored on home. By the time the first customer of the day walks through the door, manager Tom Franz and his staff of fishmongers have handled more fish, shrimp, clams, oysters, crabs, and ice than you can count. 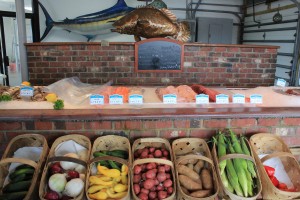 The counter at Mott’s Channel Seafood

The shop buzzes. There’s a stack of orders to fill for almost two-dozen regular restaurant buyers. The flounder fishermen tie up outside, waiting to sell their catch. Five hundred pounds of shrimp just came in. And the grouper fishermen arrive late in the afternoon after the Mott’s staff have made their first round of restaurant deliveries and doled out fish to the noontime masses.

Finally, there’s a minute or two, but no more, to step into the ice room or out onto the dock and into the summer ocean breeze for a breather.

“We stay busy here,” says Franz as he leads me from the front end of the store with its long counter of iced-down fish and shrimp into the back where the real work goes on.

“There are some 20 or so restaurants that buy from us on a daily basis – shrimp, flounder, mahi, grouper – so we have to prep all those orders for pick up and delivery; then we have another 10 to 20 who drop in on us a few times a week. Before we ever get to the public side of the fish market, we’ve done a day’s work.” 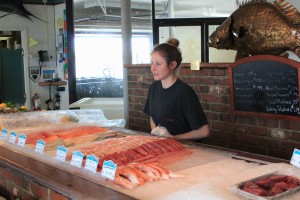 Franz has always been in, on, or around the water. Born the son of a Pamlico crabber, he worked the waters with his dad, then found his way to Wilmington. Once here, he started in his first proper fish market, but it wasn’t until Hurricane Fran left her mark on the area in 1996 that he came to Mott’s Channel Seafood.

“The area was a wreck, and I was working on a storm cleanup crew when one of my regular fishermen, Bobby Cox, told me that the owner of Mott’s Channel could use someone like me in his market. That’s when I met Gene Long. I’ve been here ever since. Seventeen years.”

The things that drew Franz into the Mott’s Channel Seafood family are the same things that keep loyal customers coming back for more. His staff know their fish – where they were caught, who caught them, how to clean them, how to cook them. They’re patient, willing to answer, and ask as many questions as it takes to lead a customer to a fish they’ll love. And they’re thorough: ask them for a fresh filet and they’ll point you to the freshest one. Not good enough? They’ll cut one for you. 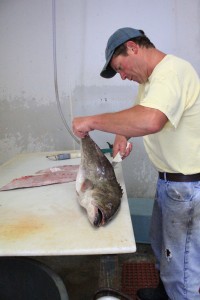 As I was saying goodbye to Franz, one of his star fishmongers, Nikki Bartle, poked her head in the back.

“We need some grouper,” she said.

Franz stepped to it, grabbing two grouper (caught the previous night) from the freezer. He put them on the table and went to work. With surprising speed and practiced cuts, he separated the meat from the scrap and cleaned each fillet. Each fish was done in a couple of minutes.

“Nothing goes to waste here,” says Franz. “The heads and all the scraps, they go out to local crabbers – guys like me and my dad, catching something to make a living. They give the people something good to eat.”

Jason Frye lives in Wilmington and is a regular contributor to the Our State Eats food blog. He has written for Our State Magazine, Haven, North Brunswick Magazine, and Wrightsville Beach Magazine.