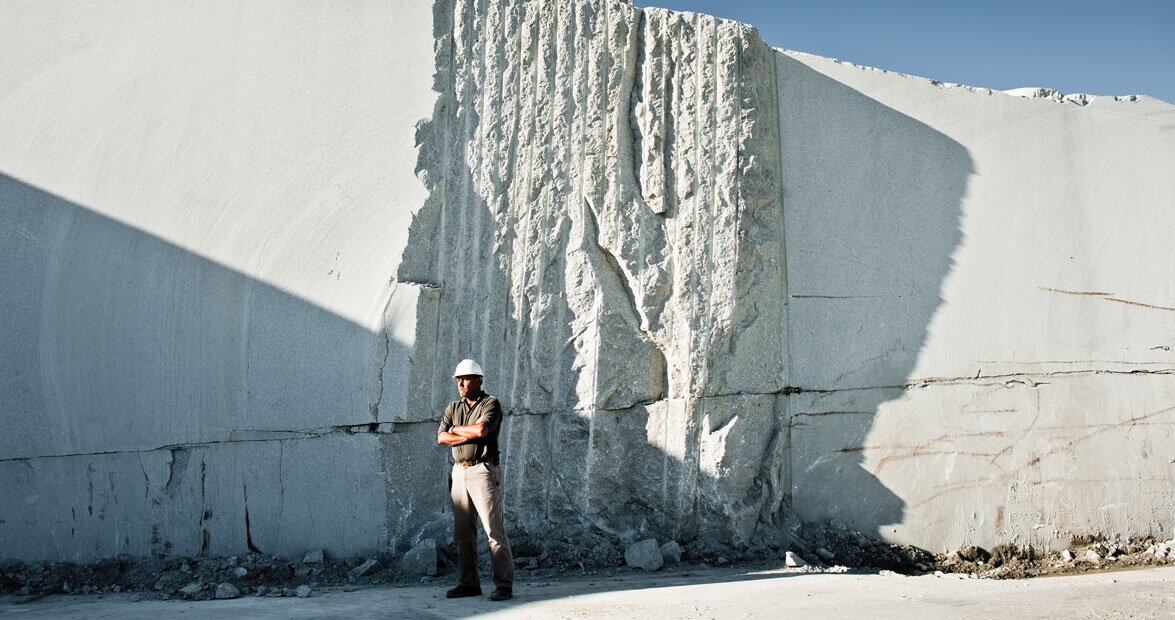 The Mount Airy locals call it The Rock.

My father-in-law, the late Jimmy Carpenter, called it that. He worked there for more than 30 years as a journeyman stonecutter. I remember his stories, stories of The Rock’s strength, its size, its beauty. But I couldn’t possibly understand it until I saw it.

The Rock is a mammoth granite quarry east of town. It is a scientific wonder, and its owners have mined it for 120 years, pulling some of the finest white granite in the world — granite they sold to build buildings and war memorials all across the country. The Rock made Mount Airy famous before Mayberry did.

It’s a complex conglomerate of science, history, and geological serendipity that all came together in Surry County eons ago.

It is the world’s largest open-faced granite quarry. On the surface alone, the quarry encompasses about 60 acres, or roughly the equivalent of 66 football fields. Mount Airy lore maintains that astronauts spotted The Rock from space as they orbited the Earth. That’s how large this rock is, and that’s just the part you can see. The mother mass — the block you can’t see — is about 7 miles long and 1 mile wide, north and south. And it’s 8,000 feet deep.

“Geologists tell us we’ve got enough to last for a while,” says Carlos Goad, the vice president of human resources for the North Carolina Granite Corp., which owns the quarry. “In our brochures, we say we have enough to last another 500 years.”

From space, the quarry appears as a white speckle amid a sea of blues and greens. From the rim of the quarry, looking out over the acres of unblemished granite, it’s too big for the eyes. And when you ride across The Rock in a pickup truck, like I did with Goad earlier this year, and you see firsthand the technology, and you feel firsthand the subterranean explosions required to break off large chunks of granite, The Rock becomes a mighty, living fortress. When you tour the company’s fabricating facilities, where the granite saws roar, you see the patience and precision needed to transform raw stone into something else — a beautiful building or a moving memorial. And when you meet the men who make all of this happen, the men who take great pride in harvesting what the rest of the world knows as Mount Airy granite, you begin to understand the importance of this place to the community and to this state.

To the locals, it feels as if The Rock has been here forever. And in reality, that’s not far from the truth.

The first known story of the land dates back to the 1800s, when a farmer bought the land and considered the large section of rock worthless.

But The Rock’s history goes back much farther than that.

About 336 million years, to be precise. It was then that The Rock formed through a geological process called plate tectonics.

“Our planet is a restless planet,” says Bert Meijboom, a Pilot Mountain geologist who does consulting work for the North Carolina Granite Corp. and is familiar with the granite quarry. “Continental plates are constantly on the move.”

North Carolina sits on the North American plate, Meijboom says. Several times in geological history — remember, we’re talking about millions of years here — that plate has collided with the African Plate. The last time it happened — approximately 360 million years ago — portions of the African plate subsided beneath the North American plate, creating a subduction zone that set the stage for the formation of Mount Airy’s huge granite quarry.

“It was along such a zone, some 12 to 25 miles underneath the American plate, that blobs of molten rock were formed,” Meijboom says. “Due to its relatively lighter weight, the molten rock, also called magma, started to rise toward the surface, intruding the upper portions of the plate.”

The magma slowly solidified over millions of years and formed what’s known as a pluton — basically, a body of igneous rock that develops beneath the earth’s surface. As the plates continued to move and extensive erosion occurred, these plutons — one of which geologists actually refer to as the Mount Airy pluton — appeared at the surface, giving The Rock its designation as an open-faced quarry. 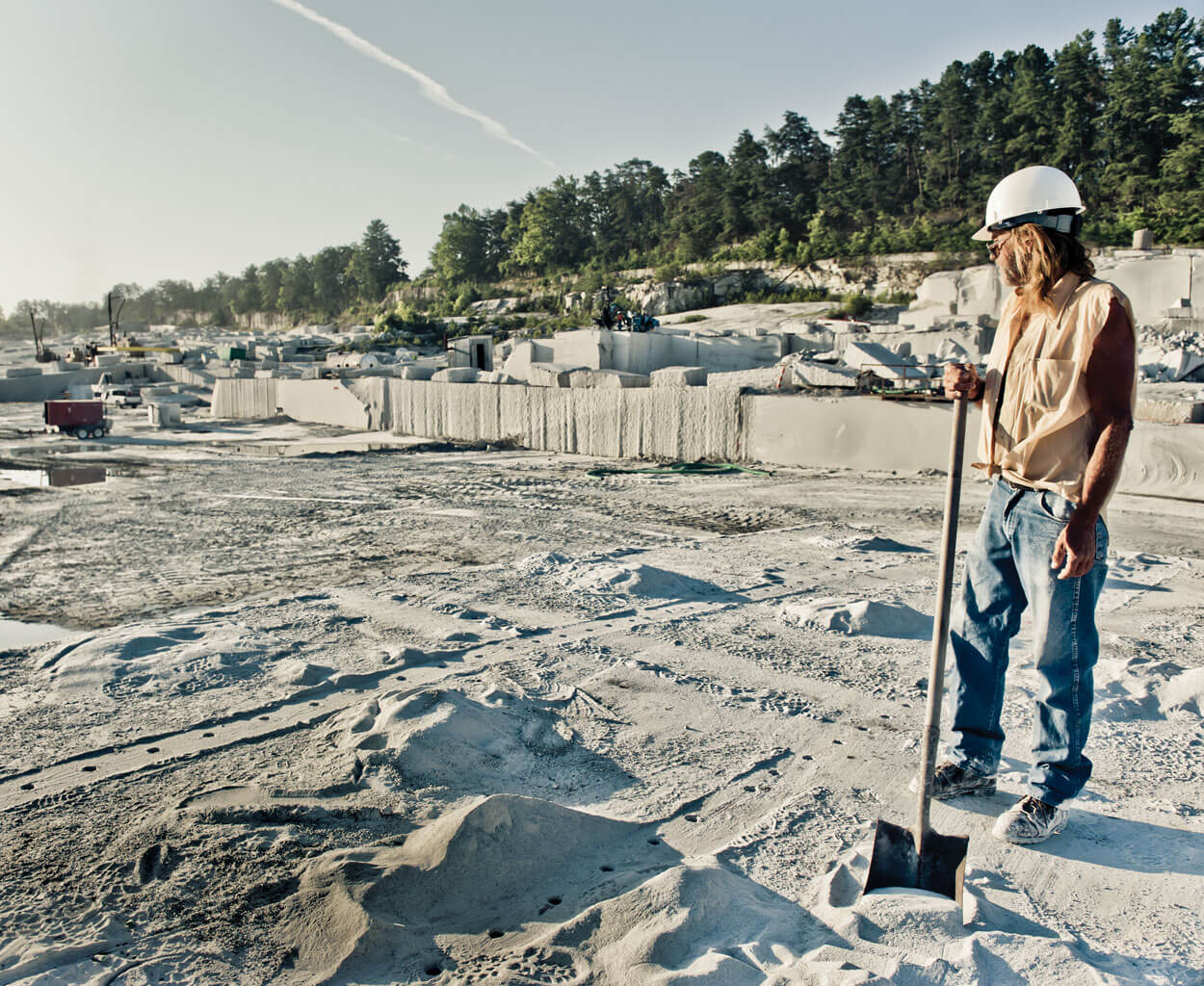 Some of the granite harvested by Jerry McBride (above) and other employees of the North Carolina Granite Corp. turns into buildings that stand right here in Mount Airy. photograph by Emily Chaplin

Harvesting granite from a geological wonder that took millions of years to form is quite a task for humans, especially considering we only began trying about 120 years ago.

Since then, workers have extracted granite down to a depth of only about 60 feet. Granite is a tough, stubborn rock, and extracting the material without damaging it requires a process that’s both rugged and delicate. The beauty of the finished product — smooth and faultless — is a testament to the quarry’s ability to accomplish such a challenging feat.

The extraction process begins with a powerful water jet — yes, water, the same force that cut and shaped so much of the earth — that slices deep grooves in the stone, about 2½ inches wide and up to 21 feet deep. The granite is no match for the forceful water jet, which packs some 40,000 pounds of water pressure per square inch at its nozzle — more than enough to blast through the stone at a rate of about one linear foot per hour. Then comes what Goad refers to as diamond technology to cut the chunk away from the mother mass.

The workers drop a diamond wire into the slots created by the water. The wire saws gently, patiently slicing across the bottom of the loaf of material to free it from the mother mass.

Finally, the fun part: setting off the explosions. Workers drill one-and-a-quarter-inch holes almost through the entire depth of the freed loaf, strategically spaced to yield the size of the granite blocks desired — about 10 feet long, 5 feet wide, and 5 feet deep. Then they drop an explosive called Primacord down into those holes, fill the holes with water — the water magnifies the force of the explosion — and then three, two, one … ka-boom!

Several times a day, such explosions can be heard — but not felt — up to about a mile away from the quarry, always preceded by a warning siren.

With the chunks of granite now a more manageable size, workers transport the pieces to the fabricating facilities on sturdy forklifts designed for such a heavy load — 165 pounds per cubic foot, Goad says. The company extracts about 1 million cubic feet of granite per year. That’s more than 82,000 tons of granite annually.

That’s a lot of rock.

To give perspective, consider that a cubic foot is about the size of a basketball. A cubic foot of granite weighs 165 pounds. So imagine a 165-pound basketball. And now imagine 300 of them on a trailer.

The quarry has two fabricating divisions, one for curbing and the other for dimensional stone, which includes the granite used for buildings, memorials, mausoleums, and other products that are as decorative as they are functional. The crushing division reduces granite waste to small pieces sold for landscaping chips and other purposes.

“We’re always going to generate some waste in the quarry through our extraction process, and we generate waste through our production plants as we cut pieces off,” Goad says. “So if we didn’t have this crusher to reduce that material, we’d be under a mountain of waste right now.”

Mount Airy granite is more widely recognized for its dimensional uses — including such high-profile projects as the World War II Memorial in Washington, D.C.; the Arlington Memorial Bridge; and, here in North Carolina, the Wright Brothers Memorial — but it’s also popular for curbing, especially in Northern states.

“They especially like the curbing in states where they get a lot of snow and ice,” Goad says. “A concrete curb will deteriorate in about two or three years due to the salt, but granite is impervious to the salt.”

That’s granite for you — the rock of ages.

Standing at the public observation area overlooking the vast quarry, Melvin Miles bends over to pick up a small piece of granite, then hands it to a visitor. Miles, who has lived in Mount Airy since 1975, leads tours of the town several days a week, and the quarry is always a part of his tour. He knows most visitors come to see the town that gave us Andy Griffith and influenced fictional Mayberry, but he also enjoys giving them a piece of The Rock.

“Sometimes, you’ll see them kind of roll their eyes, like, ‘Who wants to see a rock?’ ” Miles says. “But then when you get them over there, you can’t get them away from it. They’ve got 10,000 questions, and they don’t want to leave.”

Miles, a retired schoolteacher, can show you everything in town that was built from Mount Airy granite: The post office. The Veterans’ Memorial. The police department. The public library. The municipal building. The many churches, including the Moravian church Andy Griffith attended growing up. The banks and other businesses. The residences. The Visitors Center. The new facade of Mount Airy High School.

Miles also likes to remind visitors that the pieces of granite they see in Mount Airy — both at the quarry and in buildings around town — are small pebbles of that huge rock that formed all those millions of years ago.

“Remember, the quarry is seven miles long under the ground,” he says. “It comes all the way under the downtown area. I remember when I first came here and was looking to buy a house. The first thing the realtor told me was, ‘Now we want you to understand there is no more than 24 inches of dirt in your yard anywhere and there’s no basement — it’s solid rock.’ ”

Yes, Mount Airy, known as The Granite City, actually was built on The Rock.

It’s good to remember that from time to time. Mount Airy is one of our most famous little towns, and it has plenty of character throughout it, but if you dig down even just a bit, you can’t forget: The Rock was here long before the city.