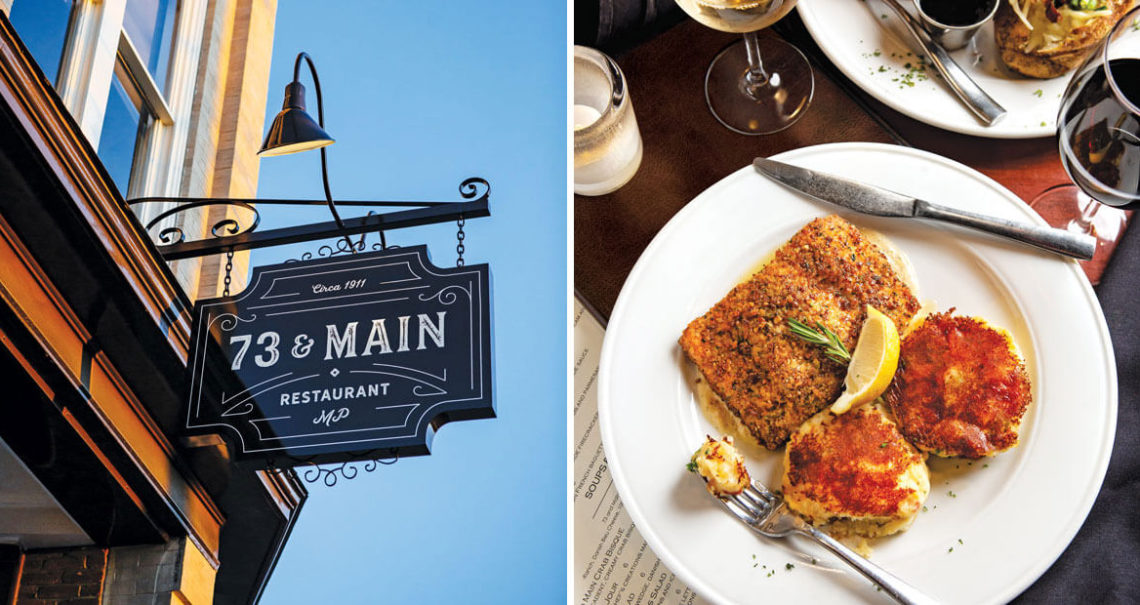 Fresh from his residency at East Carolina University’s medical school, a young Dr. Allen Dobson Jr. arrived in Mount Pleasant to take over for the retiring physician who had tended the town’s aches and pains for 43 years. Dobson and his wife, Martha, settled into the small community northeast of Charlotte, and, in 1983, he opened Mount Pleasant Family Physicians. With a reassuring smile beneath his signature mustache, the new doctor, like his predecessor, made house calls, but he also introduced medical advancements into the rural community, like a new X-ray machine, which came in handy during the local football season.

“We tried to do everything a community would need without having to drive to Charlotte or Concord,” Dobson says of his early practice. “We tried to make it personal.”

Now, Dobson is applying that same mission to a new venture: 73 & Main, the restaurant that he opened with fellow physician Charles Rhodes and physician assistant Tom Earnhardt in December 2017. The trio bought the historic 1913 building on the corner of NC Highway 73 and Main Street earlier that year. Where others had seen bricks and beams long past their prime, the doctors saw good bones and the makings of a new community hub. A place to make people feel good, happy, and well cared for. Dobson likens his new role as an entrepreneur to his long career in medicine. When you get right down to it, both are about serving the community. Or, put another way, he says, “It’s about the personal relationships.” 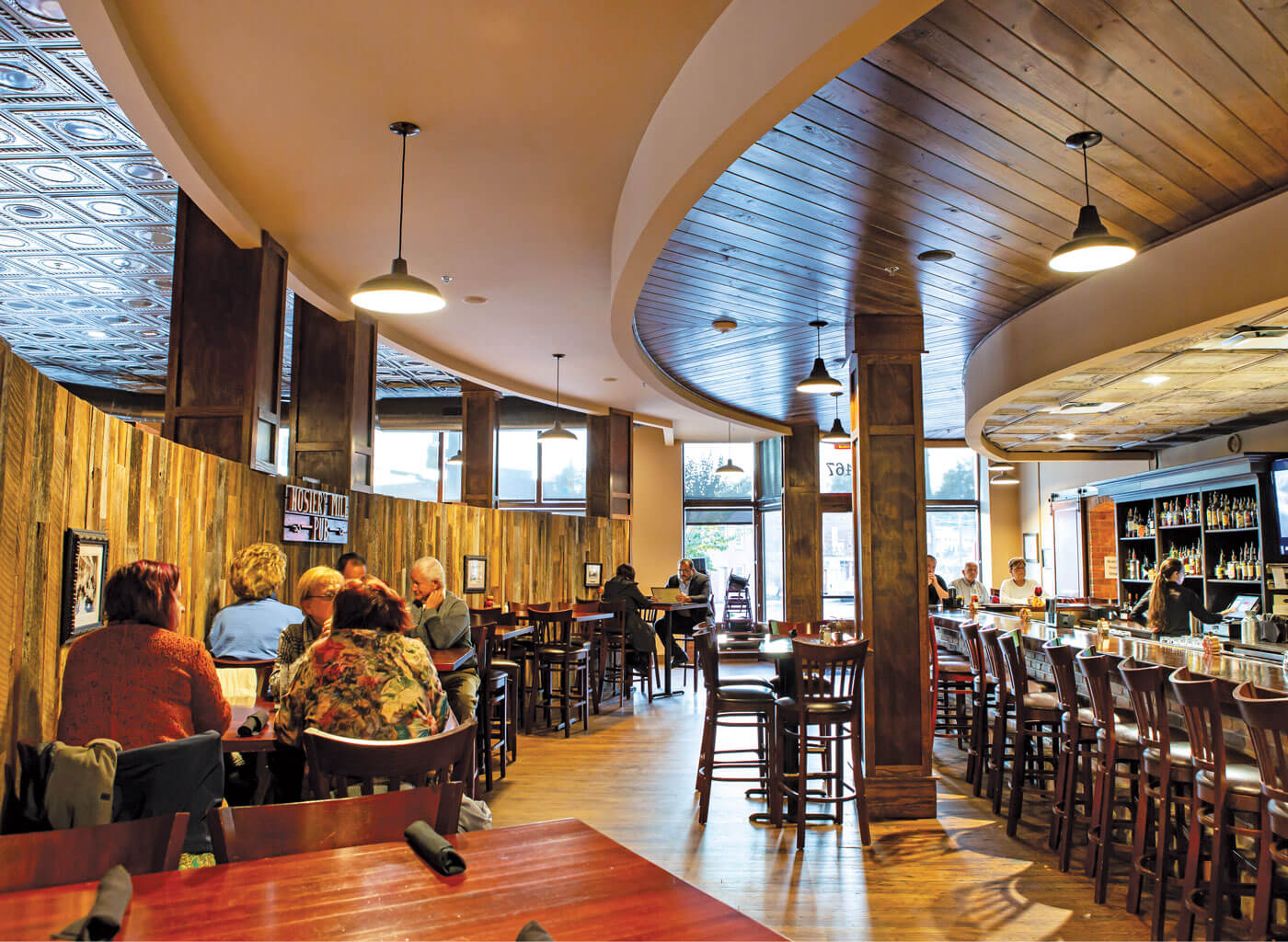 For those in the mood for casual dining at 73 & Main, The Hosiery Mill Pub offers burgers, fries, and other bar-food staples. On the opposite side of the wood-plank wall is The Mercantile Dining Room, where you’ll find fancier fare.

Restaurant choices are slim in this town of 1,900, where What-A-Burger #13 has been a favorite haunt of locals since 1969. Dobson and his partners knew that the Mount Pleasant area was ready for more adventurous culinary experiences, but the character of their restaurant didn’t fully take shape until after the restoration process began.

When the doctors bought the two-story building in early 2017, it wasn’t much to look at. It had been vacant for nearly a decade, and its upper windows were bricked in. Built in 1912 as the Mercantile General Store, the building operated as the Mt. Pleasant Hosiery Mill from 1932 until it closed in 2009. At that time, Robin Hayes, a former member of the North Carolina House of Representatives, owned the space, and he donated it to the town in 2016.

When Dobson’s son Robert heard that Hayes was parting with the landmark, he mentioned to his dad that it would make a good brewery. The three doctors purchased the building from the city, and, with the help of an old photo of the Mercantile General Store gleaned from the Eastern Cabarrus Historical Society & Museum, they began resuscitating the structure.

“It’s brought out stories, pictures, and connections to the past. It’s made Mount Pleasant relevant.”

Brian Seagraves, who grew up getting his hair cut across the street from the building, put his construction and masonry company to work on the restoration. They soon found some delightful details from the past: The building’s dull yellow facade hid an original facing that mimics marble, a common building practice in small towns in the early 1900s, used to make structures appear stately. The hardwood floors downstairs were keepers, too. And the original cabinets were refinished to house liquors at the bar and the dining room’s serving station.

A craftsman from Concord rebuilt the massive window casings to the exact specs of the Mercantile General Store. The airy second floor, with its exposed wooden columns and a panoramic view of downtown Mount Pleasant, stays booked for weddings, reunions, and parties.

During a recent event, a notch in one of those columns triggered a memory in a guest who’d visited the hosiery mill when he was a youngster. “He explained to me that that was where the belt-driven machine had been,” says Jannette Kluttz, a Mount Pleasant native who serves as the restaurant’s event coordinator. “It had a big wheel here, and that notch was where the belt ran through the machine.”

Dobson and his partners knew that memories of the building at the corner of Main Street and NC 73 ran deep in Mount Pleasant. So they kept residents apprised of the renovation and, on Facebook, sought their input on menu items. Some wanted a good steak or seafood; others wanted a place to have a burger and a beer. The result is an ever-shifting menu that reflects classic American tastes.

A chef’s table in the kitchen allows guests an up-close view of the action, while The Bourbon Bar serves vintage and contemporary bourbons, including the award-winning Conviction, made nearby at Southern Grace Distilleries in what used to be the old prison. (Dobson and his partners helped bring the distillery to Mount Pleasant, too, by purchasing and renovating the prison.) The bar also delivers a front-row view of the restaurant’s Old Well Brewery, named for a mid-1800s well discovered below a concrete slab out back. A wall now surrounds the area, but, through a Plexiglas cover, guests can peer down the restored, stone-lined shaft to make coinless wishes.

Some of those wishes have surely come true already in Mount Pleasant’s gradual downtown reawakening. Dobson notes that the building across the street is being renovated into a coffee shop, bakery, and offices. Ambition is in the air. “There is an invisible, unstated community pride,” he says. “It’s reconnected people in the community and brought out stories, pictures, and connections to the past. It’s made Mount Pleasant relevant. That’s been the most fun part of the journey.”