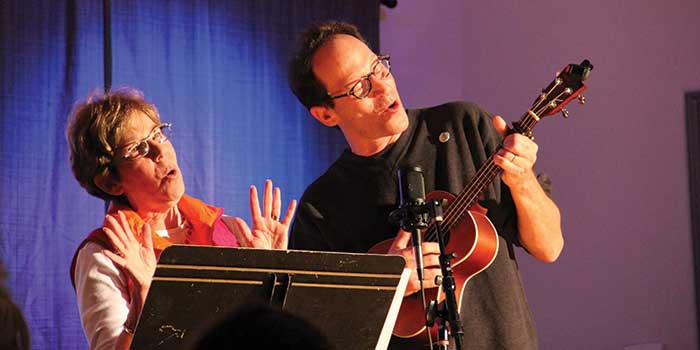 So you find yourself among the 150 or so sitting in a lovingly restored auditorium in Durham for the live taping of the Murphey School Radio Show. Onstage, announcer Rob Gringle’s smooth voice welcomes “ladies and gentlemen, children of all ages,” and the seven women of the a cappella group Stella gather around a single mic, swaying and mixing their voices as they swing into “An Evening in Caroline.” The show opens.

You’re lost. Delighted, but lost — far away, swept into a kind of entertainment, a kind of community celebration, that you can be forgiven for believing no longer exists. Guest writers and regular players hold scripts and walk through wonderfully silly — and scarcely rehearsed — skits. Host Georgann Eubanks affectionately teases and praises the guests, who all sit onstage throughout, gazing at one another, positively loopy with mutual adoration. The musicians take turns, supporting each other and wowing the crowd with the kind of intimacy only live performance brings, though that energy always makes its way through the airwaves into the radio broadcast.

Groping for comparison you’ll think of “A Prairie Home Companion,” though that show hasn’t had this kind of energy for decades; same with its progenitor, the Grand Ole Opry. Donna Campbell, producer and organizer of the twice-yearly show, likens it to a Rooney-Garland movie: “We just called all our friends and asked them to get together and do a show.” That’s getting closer.

The Murphey School operated from 1923 to 1959, and its auditorium was built in 1936. In 2008, Jay Miller and Ebeth Scott-Sinclair, who practice a kind of hyperlocal philanthropy, bought the Murphey School property and spent the next two years renovating it. The result was the Shared Visions Retreat Center, which offers meeting places and other services to Durham and Orange County nonprofits as an element of Miller and Scott-Sinclair’s Shared Visions Foundation.

When the renovation was done, the center’s updated space boasted Wi-Fi, refrigerators, and other modern accoutrements. But Miller and Scott-Sinclair also found themselves with that beautiful auditorium on their hands. With broad fanlight windows, hardwood floor, and a stage that did everything but tap its foot impatiently, clearing its throat, Scott-Sinclair and Miller recognized it was showtime. They called Eubanks and Campbell, who are partners in a video production company and friends to about every writer and musician in the Triangle.

The radio show emerged in 2011. Shared Visions chooses two nonprofits — one in Durham County and one in Orange County — to receive the entire proceeds from each show. The two guest writers, all the musicians, and everyone else perform for free. Underwriters get personally written jingles for their donations of food, services, equipment, or funds. And the paying customers get a live show that is wryly onto itself but has a heartbeat so loud you can hear it from space — or on Chapel Hill radio station WCHL, or, like everything else, online.
Stella member Betsy Levitas explains it best. “It happens twice a year,” she says. “This community that appears and then disappears.” That’s got it. A little community forms, works for a weekend, creates something wonderful, and is gone — for another six months.
“It’s like this little Brigadoon,” Levitas says. “I can’t believe we get to do this twice a year. That we don’t have to pay for this.”

Attend the next Murphey School Radio Show on Saturday, November 2, 2013, at 3 p.m. or 7 p.m. Purchase tickets, see video, and listen to past shows at murpheyschoolradio.net.

When Scott Huler was a guest on the Murphey School Radio Show in 2013, he played the ukulele. People are still talking. His most recent story for Our State was “The Big Chip” (October 2013).