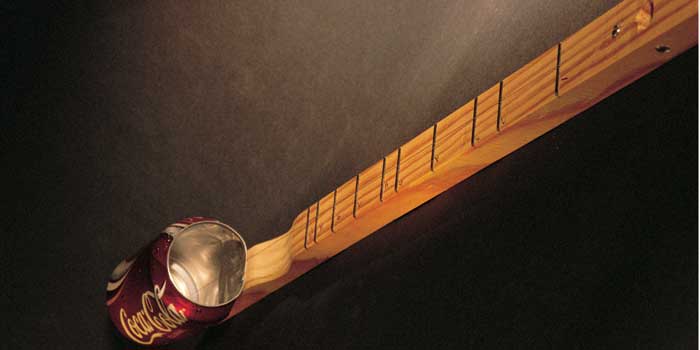 Editor’s Note: This story of Herschel Brown was one Our State‘s most popular stories. We, along with many other North Carolinians, were saddened to learn of his death on September 20, 2008. He was 87 years old. We feel privileged to have shared his story with our readers in 2004.

Herschel Brown’s fingers, roughened by decades spent working with wood, press firmly on the narrow fingerboard lined with frets. Brown’s other hand picks a melody on the lone, steel string.

The mournful tune resonates throughout the cavernous workshop. Brown, a Jacksonville building contractor, grins as he reproduces the famous lament on an instrument so simple he says everyone can play it — and insists they should.

“Everybody ought to have a little music in their lives,” Brown says between songs. He pats the humble-looking instrument — a long, narrow, wooden fingerboard with 10 frets, an empty soft drink can attached to one end and a tuner key on the other — then launches into the opening bars of “Amazing Grace.”

The notes twang as they fade, absorbed by the sawdust and scraps of wood piled on the floor of Brown’s workshop. Stacks of fingerboards awaiting frets stand in a corner. When Brown’s finished with them, they’ll be integral parts of the instrument he’s playing. He calls it the “can joe.”

Brown first spied the forerunner of the can joe while on a trip to the North Carolina mountains about 15 years ago. Called the “uni-can,” it consisted of a plastic fingerboard, a plywood stick, and a dog food can. Brown recognized that the frets were comparable to those of mountain dulcimers. After studying the uni-can, Brown concluded he could do it better. He returned home and worked on the design until he came up with an inexpensive but sturdier version.

Brown loved the little instrument, played much like a one-string guitar, and decided to share it with the rest of the world. He contacted a catalog company and now sells can joes through the mail. Brown prices it so low he makes no real profit, but the cost covers his expenses. And, in a move that would baffle most entrepreneurs, he also declines to patent his design.

“You can’t patent happiness,” Brown offers, openly inviting people to replicate the can joe or craft their own version. Why? Because Brown says making music brings joy into the world, and there’s no easier way to make music than with a can joe.

“It’s rewarding to see people, especially older people who’ve never been able to play music, pick up a can joe and play a tune,” he says. 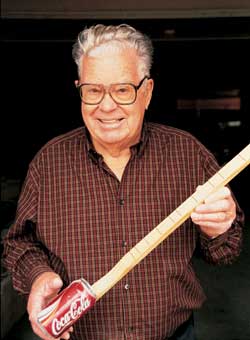 Music didn’t play much of a role in Brown’s early years. Born in Seagate, about four miles from Wrightsville Beach in New Hanover County, he instead learned the craft of woodworking at his father’s knee. Times were tough, and every free hand was needed.

“I helped my father when I was 12 years old. He had a blacksmith shop, rebuilt truck bodies, did mill work, and constructed a few homes — any kind of work he could do during the Depression,” Brown says.

A husky boy, the younger Brown was in demand among local businessmen in need of a strong back. He soon found himself milking cows twice a day for $1.50 a week. He wasn’t too taken with the dairy business and instead returned to what he loved best — turning wood into something useful or beautiful. He remembers studying carpentry in school with fellow classmates.

“(The late newsman) David Brinkley was in my woodworking class in school, and he turned out to be a good woodworker, or so he told me,” he says. Brown graduated from high school in 1938.

He eventually went into building contracting and construction, working with his brothers. When his brothers moved to Onslow County to take advantage of the building boom created by Camp Lejeune Marine Corps Base, they turned to Brown for help in erecting a commercial building. Sensing a good market for his talents, he packed up and moved to Jacksonville in January 1952. He and his wife Marguerie have been there ever since.

Their children — Raeford, the news director at WECT-TV in Wilmington, and Suzette, married to a Marine officer and living in Virginia — were raised in Onslow County. One of Brown’s three grandchildren lives next door to him in a house he built for her.

Over the years, Brown dabbled in politics, with successful runs for the Onslow County Board of Commissioners and county school board. But that’s all in the past. Today Brown concentrates on running his construction company from his home office. After 52 years in the business, he has yet to show any signs of slowing down and still puts in a good day’s work. Brown prefers the quality and pride of old-fashioned craftsmanship but isn’t mired in yesterday. A computer graces his desktop, although he steadfastly refuses to obtain an email address. And the office itself is modern, though simple.

Old family photos dot the wall, and in the corner, plans for Brown’s latest construction project sit on a drafting board. Noted for his extraordinarily high standards, Brown accepts only one commission at a time. He doesn’t work for the money. Financially comfortable and with an excellent reputation for quality, Brown doesn’t have to continue putting up buildings.

He’s critical of the construction industry. Brown believes too many are in the business only for the money and neglect to devote enough time to the hands-on experiences that develop skill in the basics, such as cutting wood, driving nails, framing a building, and pouring the concrete.

“I try to give customers an honest building and pride myself on delivering to the customer everything I committed to deliver, plus a little extra,” Brown says.

Brown and his wife spend much of their free time traveling in their large motor home. It was on one of those trips that he began to nurture a love for mountain music. He fancied a beautiful mountain dulcimer he’d found during one of his travels. But, since he couldn’t play, he decided not to buy it. At Christmas, Marguerie presented it to him, forcing Brown to learn to play. Eventually, his penchant for wanting to know how things work led him to start crafting his own mountain dulcimers.

After a year of making dulcimers and scrapping them, Brown gave up and went to see Stanley Hicks. Hicks, a legendary musician and craftsman, lived near Boone and was considered an expert in the art of making — and playing — both dulcimers and fretless banjos. He produced world-renowned banjoes made entirely of wood, with heads constructed from groundhog hides.

Hicks showed Brown how he made his famous dulcimers using limited tools in a shop with a dirt floor. Brown and the legendary musician became friends and stayed in touch until Hicks’ death in 1989.

Brown continued his love affair with stringed instruments, crafting dulcimers in his workshop and polishing them until they shone. Meanwhile, his travels brought him in contact with the uni-can, and he began contemplating the possibility of playing an instrument with only one string.

Many cultures have developed single-stringed instruments. Vietnamese musicians play the don bau, controlling its sound by pinching the string with one hand and changing tautness with the other. The Pullivans of south India use a bow to play the veena, which also has a multi-stringed version. And, closer to home, African-American slaves once played diddly bow guitars, based on instruments of African origin and the probable forerunner of the slide guitar.

Brown liked the can joe’s simplicity and the fact that it was easy to play. “I’m not musical. In fact, I’m the sorriest musician in the world. But I can play a can joe,” Brown says.

A can joe in every home

Across the North Carolina state line, in Blountville, Tennessee, John VanArsdall echoes Brown’s enthusiasm for the can joe. But then, what can one expect from someone who goes by the professional name of “can joe John”? VanArsdall adopted Brown’s original design and built a more substantial instrument. He’s taken his can joe act on the road and even released several CDs of his music.

Brown introduced him to the can joe when VanArsdall and his wife Paula lived in Jacksonville. The Tennessee man says the can joe can be used to play serious music with a light heart.

“It is not a toy, but a real instrument. I have played to cancer victims in hospitals, hospice houses, and private homes,” VanArsdall says. “I saw their pain-filled faces light up. What better medicine can any doctor give?”

VanArsdall used to play his can joe for Paula, to comfort her during the final days of her illness. He says the music brought her peace and happiness. And for that, he thanks Brown. “Herschel Brown is one of the finest gentlemen alive. He is an octogenarian with the heart of a child, who wants to share with everyone the joy he knows is spread by the can joe,” VanArsdall says.

And spread the joy is exactly what he has done. In fact, his can joe was even used in one Washington, D.C., public school to start a music program. “It was the only type of instrument in the whole school,” Brown says. The program, started by the educator daughter of a can joe enthusiast, eventually led kids to discover the joys of creating music. And Brown believes that nothing could be finer.

“What better way to forget your worries than to listen to good music?” he asks. But is can joe music really good?

Brown flashes a smile, then absently rubs his shock of silver-white hair. “Some people laugh about it, but I don’t give a hoot. Everyone should be able to play some musical instrument and, other than a comb and paper, a can joe’s the simplest thing I’ve ever heard of,” he says.

“I wish everybody in the country I sell these to would copy it and make them themselves,” Brown says.

Why? “Because everybody should have a can joe,” Brown says.

And if he has his way, one day everybody will.

This story first appeared in the May 2004 issue of Our State. Carole Moore writes from her home in Jacksonville.