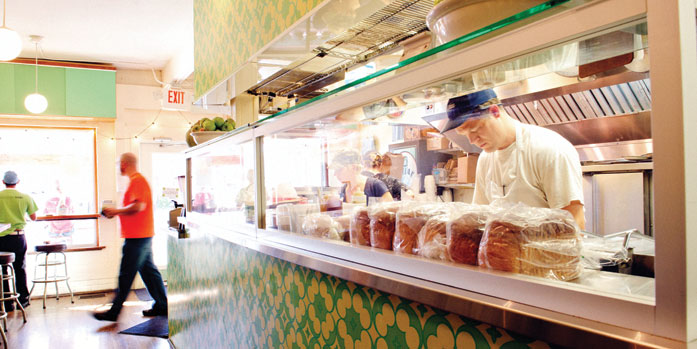 It’s noon at Neal’s Deli in Carrboro, and a steady rain falls outside.

Behind the counter, owner Matt Neal — a round-shouldered guy who is built more like a running back than a chef — works the hot side, shuttling corned beef and pastrami sandwiches to and from the oven and giving grilled pimento cheese sandwiches a quick tan in the sandwich press.

His wife, Sheila — her short, blond hair poking out from under a camouflage cap — has the cold side under control, layering Italian subs, assembling marinated tuna salads, and spooning up slow-roasted broad beans.

They work side by side in the galley kitchen, their bob-and-weave dance synchronized over a black rubber floor mat, their constant patter about orders punctuated with shouts to patrons.

“Hey, where have you been?”

“Good to see you! Hope you enjoyed it!”

On top of the deli case, plastic bags of this morning’s buttermilk biscuits are on sale, four for $4. A T-shirt hanging on a wall announces that you’re in the “Home of the Pastrami Biscuit.”

This is deli done Southern style. Specifically, Carrboro style and, most important, Neal style, which means a lot in these parts.

Matt Neal’s daddy, the late Bill Neal, was culinary royalty. He and his wife, Moreton, opened the restaurant La Résidence in nearby Chatham County in 1976. When they decided that a French place would be better off in a county that allowed wine sales, they moved La Rés — as it is known among locals — to Rosemary Street in Chapel Hill, and their version of Paris-in-the-Piedmont took off, snaring praise from food critics, including Craig Claiborne of The New York Times.

When the couple split in the early 1980s, Bill took over Crook’s Corner on West Franklin Street a few blocks away and made it the high altar of down-home. Foodies from far and wide fawned over his twists on classics like shrimp and grits.

They also snapped up his books — Bill Neal’s Southern Cooking, Good Old Grits Cookbook, and Biscuits, Spoonbread and Sweet Potato Pie — minting his legend even before he died in 1991, at age 41.

Matt Neal absorbed all of this culinary exposure growing up — he bused tables, he washed dishes, and he smoked the heck out of a pig — but he wanted something different.

He wanted to be an artist, to study drawing, painting, and design.

He went to the University of North Carolina School of the Arts, then to the Savannah College of Art and Design. He stayed in touch with the hospitality business back home by bartending off and on in Chapel Hill.

His friend Silvia Pahola, then the chef at Acme Food & Beverage Co. in Carrboro, introduced him to one of her employees, Sheila Dalton. The chemistry extended to the kitchen.

On one of their first dates, Sheila and Matt went to a movie toting cheese straws and Bene crackers that Sheila made from recipes in Bill Neal’s cookbooks.

“It was sweet,” Matt says. “And even if they hadn’t been from my dad’s recipes, I still would have appreciated it.”

“We had a lot of the same interests, and food was part of that,” Sheila says.

A native of High Point, Sheila grew up with a Betty Crocker cookbook, an Easy Bake Oven, parents who liked to eat at nice restaurants, and grandparents who loved to eat close to the earth.

Her maternal grandmother in High Point pickled green beans from the garden. Her paternal grandparents in Rockingham County made pork sausage, sipped homemade peach brandy, and cooked quail and grits with fresh-shot birds.

When Sheila packed off to the University of North Carolina at Chapel Hill to study for an English degree, she polished her food smarts, too, by baking in the cafe at Wellspring Grocery.

Later, she waited tables at the family-owned restaurant 411 West on Franklin Street, and she spent three months nibbling her way through Europe, with M.F.K. Fisher’s The Art of Eating as a guide.

A stint at The French Culinary Institute in New York cemented Sheila’s desire to cook for a living. She logged time at a couple of white-tablecloth restaurants and managed the Carrboro farmers market before launching the deli with Matt in 2008.

For his part, Matt chucked the idea of making art for a living. “It was the starving-artist thing,” he says. “I’m a big guy, and I like to eat. I said, ‘You know what? I’m going back into food.’”

“That’s what everyone asks,” says Sheila, flashing a warm smile that must have made her a good cheerleader at High Point Central High School.

The couple chose a deli for several reasons. One, they knew they wanted children, and they figured a breakfast and lunch place would be easier on family life than a dinner place.

Two, Carrboro was shy on lunch places, and Matt wanted to stay close to the family’s home — his father’s old home — near downtown Carrboro, on the western flank of Chapel Hill.

“I didn’t want us and everybody else in the world to have to drive here,” he says.

He and Sheila also hoped to draw a wide variety of customers and draw them repeatedly for the business, yes, and also for the fun of developing relationships. Both had worked in expensive restaurants and found that many customers were rather monolithic middle-agers.

“I like to see a lot of different people coming through the doors,” Matt says.

Neal’s Deli has them. Hippies. Hipsters. Grannies. Graduate students. Yang Guo is a UNC graduate student from China. A devotee of the pastrami and Italian sausages, he comes into Neal’s at least three times a week.

“Two things attract me the most here,” Guo says. “The first is the food quality. The second is the staff here are very friendly. Also, the menu keeps changing. It’s a nice surprise.”

Neal’s strives for freshness. Granted, they fly in Hofmann’s franks from Syracuse, New York, and the Zapp’s potato chips hail from Louisiana, but most ingredients come from within 50 miles. They get produce from the Carrboro farmers market; bread from Guglhupf Bakery in Durham; Italian sausage from San Giuseppe Salami Company in Elon; beef and chicken from Cliff’s Meat Market in Carrboro.

The Neals make their own pastrami and corned beef. They devote almost half of their refrigerator space to tubs where they brine beef briskets for at least a week in sugar, salt, and spices before smoking them over hickory for several hours.

The succulent meat leaves the deli inside breakfast biscuits and two of the most popular lunchtime sandwiches — the pastrami-based Manhattan, and the corned-beef stuffed Reuben.

Customers also crave the pimento cheese mixed with a splash of bourbon; chicken soup; pickled okra; and, during Mardi Gras, the gumbo.

So what the heck does that make Neal’s? A Jewish deli? An Italian deli? A New Orleans deli? A Chilean deli?

Their version earned favorable bumps in The New York Times; on Cooking Channel’s “Unique Eats”; on Oprah.com; and in Food & Wine and Bon Appetit magazines.

Matt knows the comparisons between him and his father are inevitable, and yes, he feels the pressure.

He’s not going to be rushed, though. He waves off questions about expanding beyond the tiny deli, which seats a dozen people inside and another 15 outside on nice days.

For now, he and Sheila, both of whom just turned 40, have their hands full, managing work and home life with two children, 6-year-old Hank and 2-year-old Anne.

Every so often, Matt opens one of his father’s cookbooks to study a recipe.

“Then I close the book and do it my way,” he says. That’s Neal style.

Maria Johnson is an award-winning writer in Greensboro. Her most recent story for Our State was “Forged from the Soil” (September 2011).