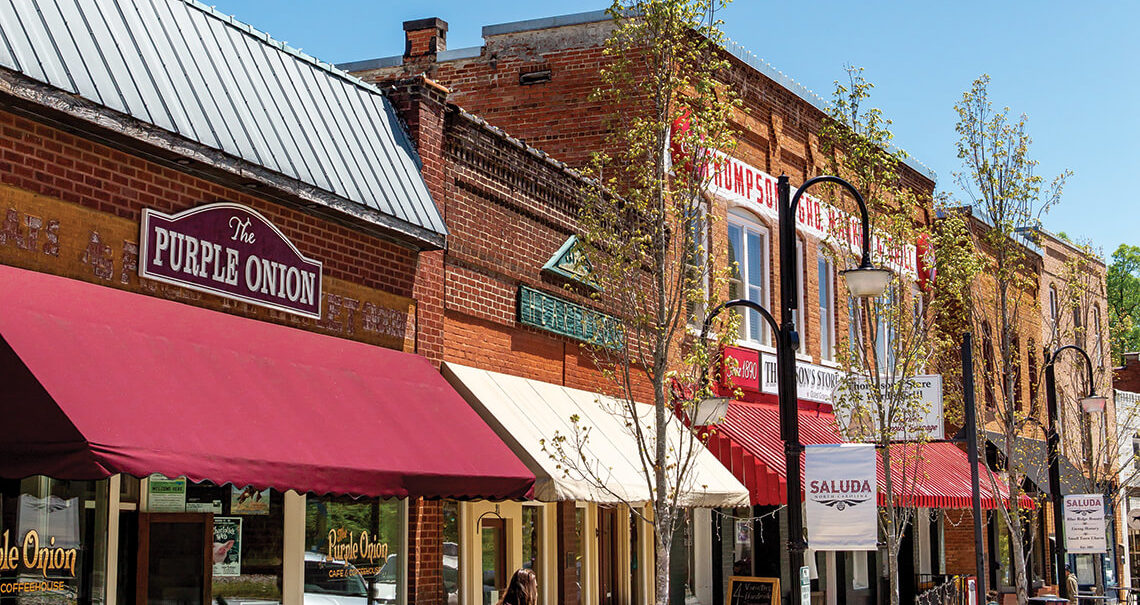 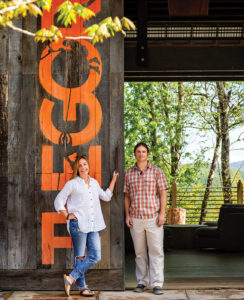 The Green River might have drawn whitewater kayaking enthusiast Sara Bell to Saluda, but it was the tight-knit community that convinced her to stay. In the 1980s, the one-time “sleepy little mountain town” started attracting artists and musicians, who transformed the neglected downtown into a thriving retail district. The businesses range from bakeries and general stores to galleries and a museum, but all of them have one thing in common: “No one started a business because they wanted it to be super successful,” Bell says. “They did it because they were passionate about their skill and wanted to share it. It’s led to a really eclectic collection of storefronts on Main Street.”

The Purple Onion. Bell calls this café “the heartbeat of Saluda.” Dine on dishes like mountain trout, pork chops, and the Grains, Beans & Greens Bowl, with live music as a backdrop on Thursday and Saturday evenings. 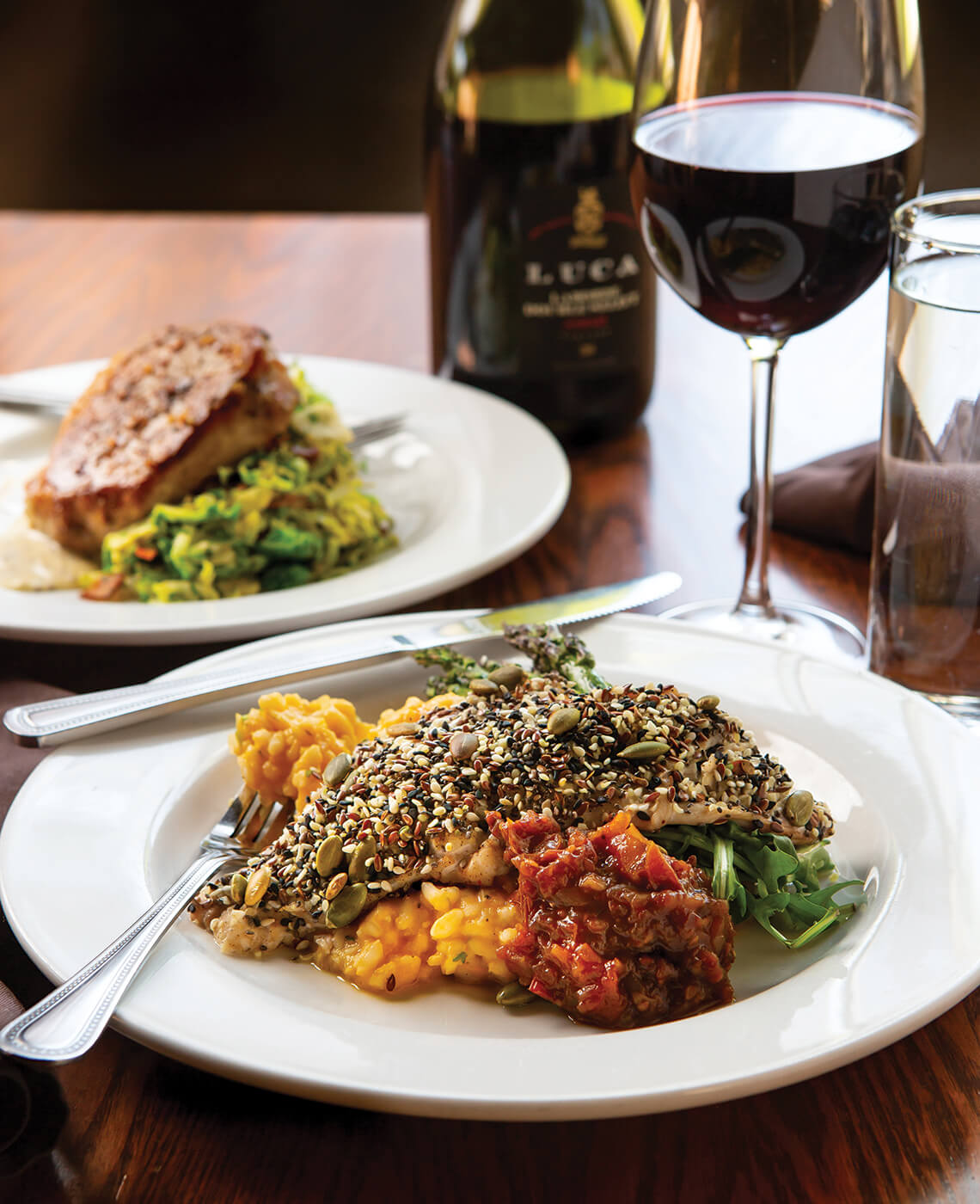 Dine on dishes like mountain trout at the Purple Onion in Saluda. photograph by Tim Robison

Thompson’s Store & Ward’s Grill. At the oldest grocery store in North Carolina, Bell suggests grabbing a bite from the on-site café, Ward’s Grill. “The burgers and milkshakes are amazing,” she says. 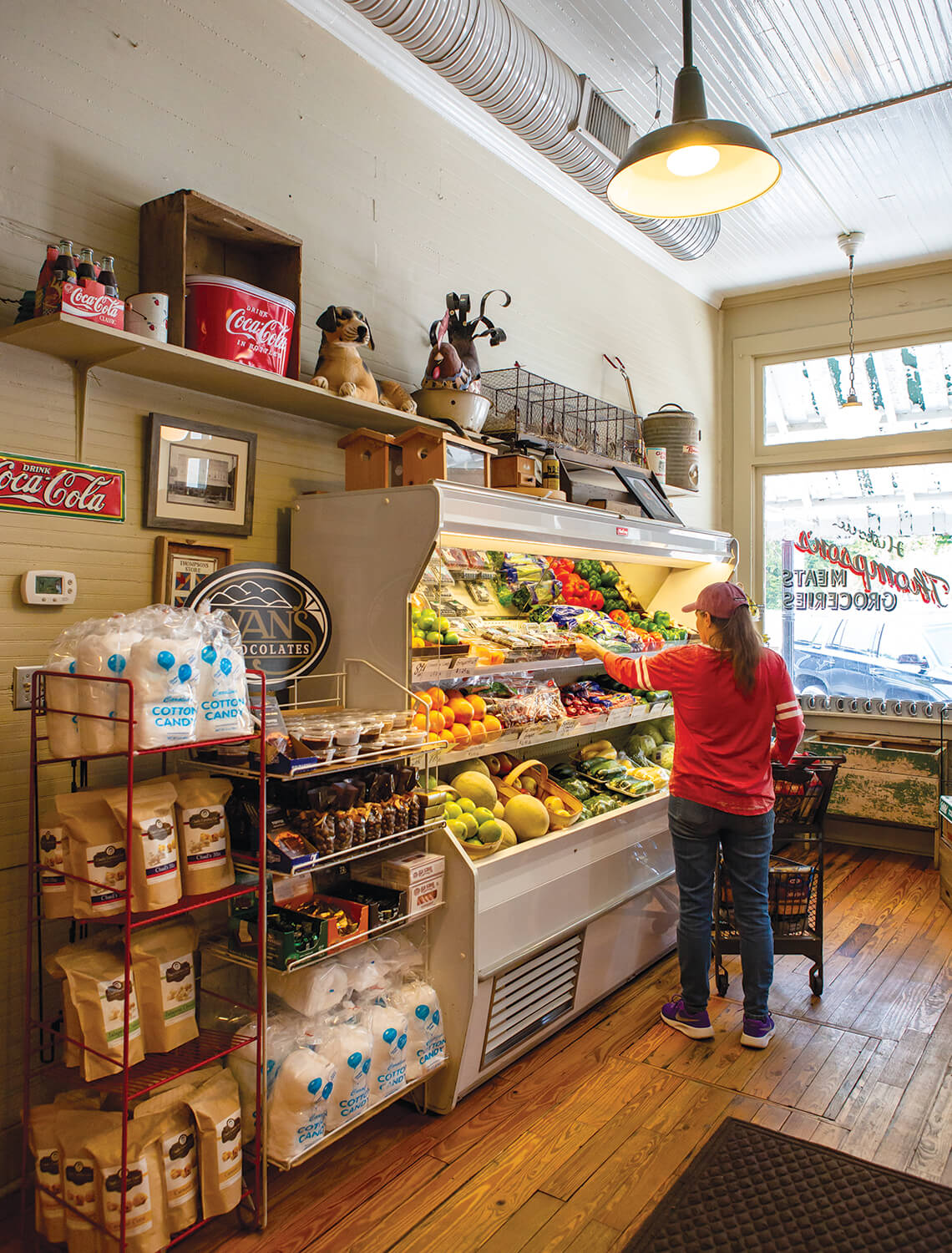 Shop for grocery essentials from Thompson’s Store in Saluda. photograph by Tim Robison

Green River Brew Depot. When you get off the Green River after a day of paddling, this is the place to grab a beer and a bite. The taps feature rotating selections of local beers, and the menu includes smoked wings, brisket sandwiches, and other pub fare.

Pearson’s Falls. Families who want an easy (and pretty) hike with their little ones are drawn to the quarter-mile trail that leads to a stunning waterfall. “It’s the destination we recommend to people coming to town,” Bell adds.

Green River Adventures. From April to October, the outfitter owned by Bell and her husband, Tim, offers waterfall hikes, rappelling, and guided inflatable kayak trips down the Green River. The Bells also operate The Gorge Zipline just outside of town. 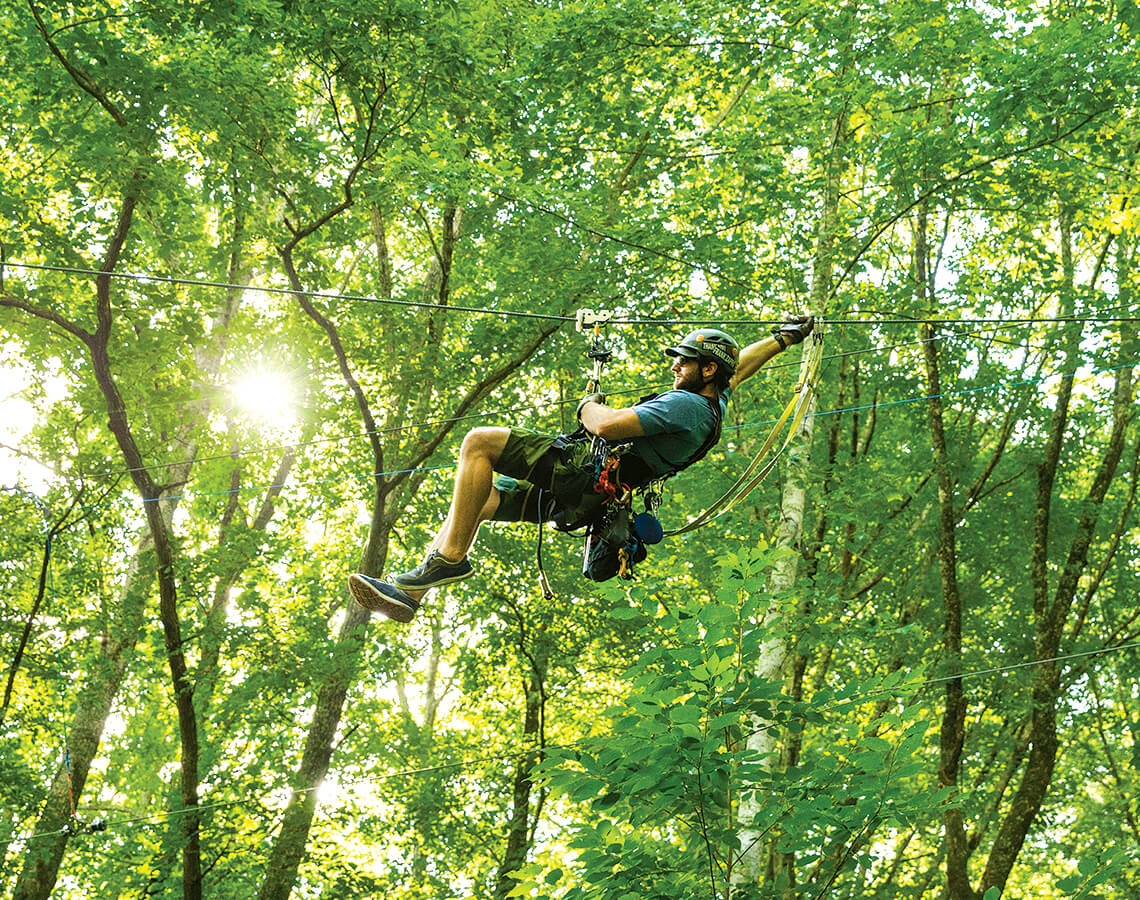 The Orchard Inn. The former summer lodgings for railroad employees now house a popular bed and breakfast. The food at the on-site restaurant, Newman’s, is a big draw: “They have an amazing chef, and the food is incredible,” Bell says.

Saluda Outfitters. Stop in for hiking boots or a kayak and stay for a beer. Green River Eddy’s Tap Room & Grill, a pub inside the store, offers pints of North Carolina craft brews. Grab a seat on the deck and listen to live music before hitting the hiking trails.

M.A. Pace General Store. From a single screw to a pair of snowshoes, you can find whatever you need at this century-old downtown general store. “It’s like a time capsule,” Bell says. “It’s worth a trip.”

Heartwood Gallery. This contemporary craft gallery was one of the first businesses to open as part of the downtown revitalization. Check out paintings, fiber art, ceramics, and other handcrafted items. 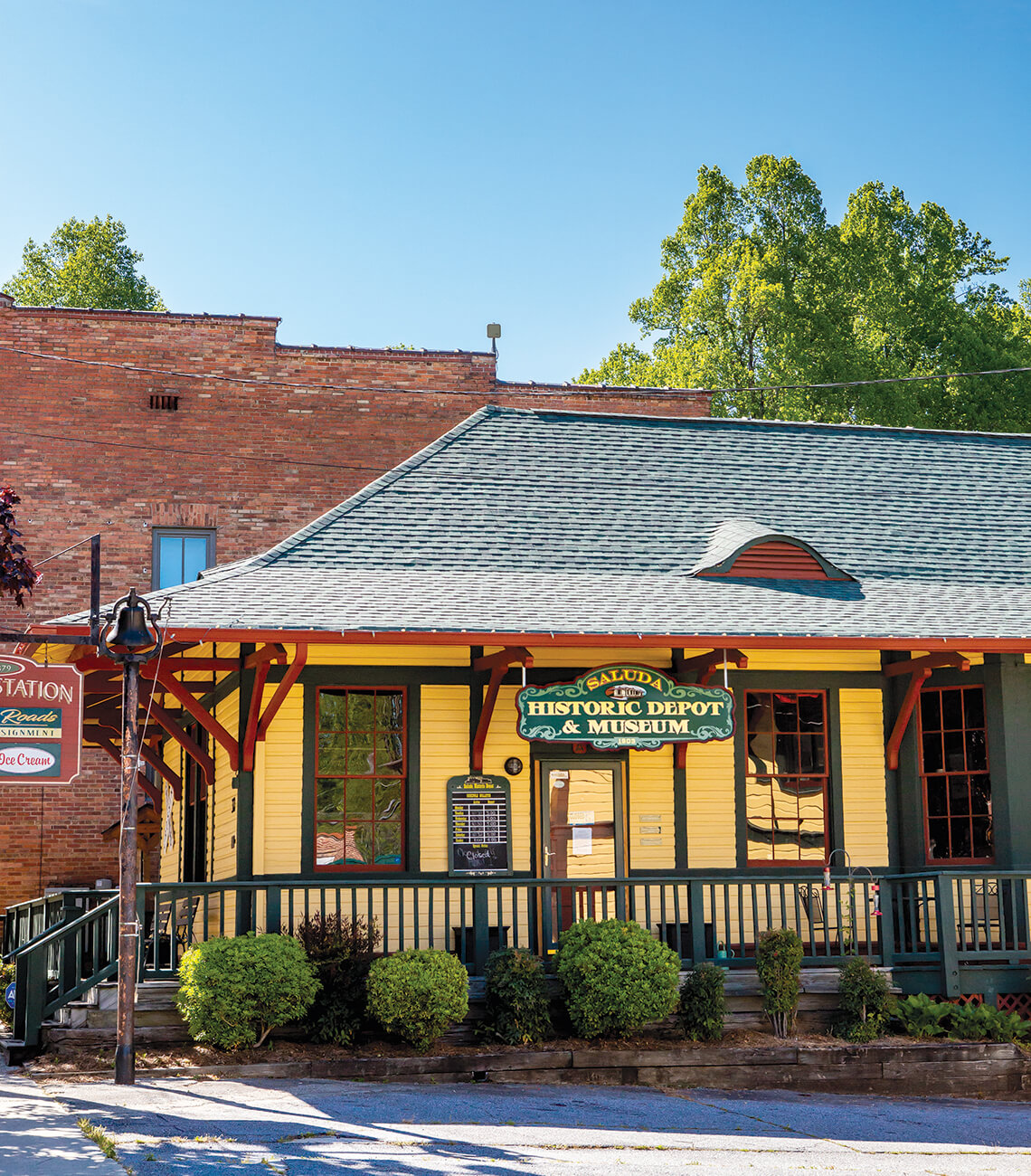 Discover railroad history at the Historic Depot and Museum in Saluda. photograph by Tim Robison

Tragedy on the Tracks

As in so many Southern towns, the arrival of a railroad in 1878 brought prosperity to what was then known as Pace’s Gap. But it also brought tragedy. Cresting in downtown Saluda before descending 606 feet in less than three miles, the “Saluda Grade” is the nation’s steepest standard-gauge mainline railroad. The stretch of track connecting Saluda to Tryon was one of the most daunting in the country, known for its high number of runaway train crashes in the late 1800s and early 1900s — three during the summer of 1903 alone. Though the last major incident occurred more than 50 years ago, operational challenges eventually forced the line to shut down in 2001. Today, the railroad’s history is highlighted at Saluda’s 1903 depot, which serves as a museum — and a tribute to those who died on the treacherous tracks. — Katie King