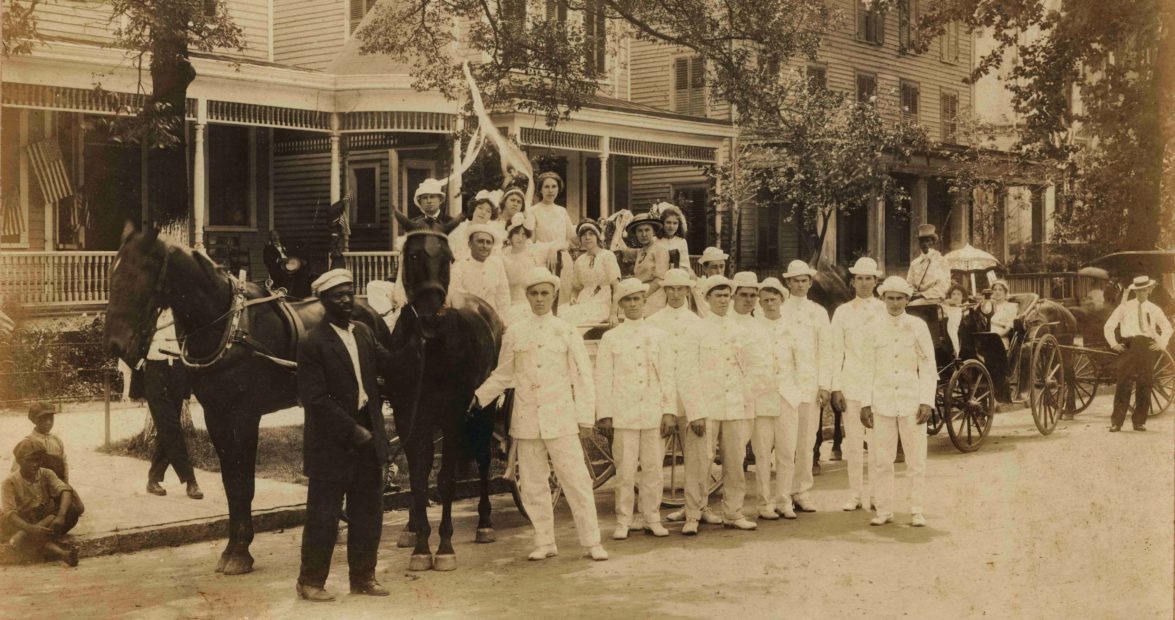 It’s a bit jarring at first — a horse’s head staring out of a glass box. For the past 85 years, Fred’s chestnut-brown eyes have looked toward the horizon, perpetually ready to respond to the next fire call. Beyond the bridle covering his long face, the reins reach back to where his wagon, beloved driver, and the rest of him used to be. He sits in the middle of a museum, one of the main characters in the story of North Carolina’s oldest chartered fire department.

Fire Horse Fred, as he’s dubbed, served the residents of New Bern for 17 years. Now, he’s one of the most popular exhibits in the New Bern Firemen’s Museum, helping chronicle the 165-year-old story of the city’s firefighting history.

“Fred died in 1925. He was one of the last fire horses,” says Sandra Faulkner, a tour guide with the museum in downtown New Bern. “Some say all of him was stuffed. But if he was, I can’t remember.”

Fred pulled a hose wagon during the early part of the 20th century. He belonged to the Atlantic Hook & Ladder Company, a group of local men who formed a firefighting fraternal organization in 1845. Members paid monthly dues of 25 cents and faced fines of $5 for leaving a fire truck while at the scene of a blaze or for showing up drunk.

Fred was bought from a Gastonia man in 1908. For years, he pulled the fire company’s wagon, marched in parades, and competed against other fire horses. He died on the way to a false alarm, apparently of a heart attack, at age 25. His driver, a man named John Taylor, died only a couple of weeks earlier.

Fred’s contemporaries — Old Jim and Ben Hurst — were other fire horses whose legends are preserved in stories but not stuffing. The two belonged to Atlantic’s rival volunteer company — the New Bern Steam Fire Engine Company No. 1, which was incorporated just after the end of the Civil War in 1865.

During the war, the Atlantic company basically was inactive, with most of its members away in the fight and Union troops occupying New Bern for three years.

After the Confederacy surrendered, some of those Union soldiers stuck around the area and continued their volunteer fire company with about 30 men. The New Bern Steam Fire Engine Company No. 1 would eventually be nicknamed the Button Company after it bought a Button fire engine in the 1880s.

Sparring between the Atlantic and Button companies lasted for decades and remains part of the city’s lore. In those early days, they would try to outrace each other when the fire alarm bells rang. People would gather to see which men would get to a fire quickest, and fistfights sometimes broke out, says Charles Williams, manager of the firemen’s museum.

“Our understanding is they would sabotage each other’s equipment and try to prevent them from fighting fires,” he says. “It was a contest as to who would put the fire out. They wouldn’t cooperate with each other.” Even babies were brought into the rivalry. With each company having its own group of fans, mothers dressed their infants according to the companies’ colors — blue and white to support the Atlantic crew and pink and white for the Buttons.

The companies tried to one-up each other on the field as well. At the turn of the century, firefighting competitions were popular, and both the Atlantic and Button companies traveled around the state for events.

Fred once tied a Button horse in a hose wagon event, completing it in 29 seconds. A painting at the firemen’s museum depicts the timed event. A horse in mid-gallop pulls a hose wagon while a fireman on the ground holds an end of the hose as it unravels. Firefighters would lay nearly 230 feet of fire hose, screw on the fire nozzle, and get the water flowing as fast as possible.

In 1911, Ben Hurst did it in 26 and two-fifths seconds at a competition in Charlotte, setting a world record. Fred might be the city’s most popular fire horse, but Ben Hurst was its fastest.

Another painting shows the final scoreboard from the Charlotte competition: New Bern’s Button company in first place, followed right behind by the Atlantic firefighters.

Every firefighter on hand, including Fred, worked nonstop during the worst fire in New Bern’s history. On the morning of December 1, 1922, a fire sparked at a lumber yard and spread quickly. While firefighters toiled to put out the massive flare-up, a separate fire kicked up in a residential area about a mile away.

High winds swept the sparks from house to house, and fires multiplied throughout the predominately black neighborhood. A newspaper account of the event in The News & Observer said flames “spread out like a giant fan” until they reached the Neuse River.

Seven tons of dynamite were used to blast 100 homes to create a fire break and prevent the blaze from consuming downtown. A train engine used a heavy cable to pull down several houses.

People spent the night in a cemetery with whatever they could grab from their homes while the fire blazed. Departments from surrounding cities sent help, including Washington firefighters who rushed equipment to New Bern by railroad. By midnight, the fire was under control.

In the end, 1,000 homes and businesses were destroyed. More than 3,000 people — a quarter of New Bern’s population — were homeless. Most of them were black; more than half of the town’s black population was left without shelter, Faulkner says, pointing to a map of the fire that scorched 40 blocks. Only one person — a 105-year-old woman — died in the fires.

“After this, they all had metal roofs in New Bern,” Faulkner says.

A few years after the devastating fire, city officials attempted to bridge the divide between the two companies, consolidating them into a single firehouse in 1928. But being housemates didn’t produce an automatic truce.

For one thing, the new building came with its own Mason-Dixon line. Inside the Spanish Mission-style building, two staircases climbed from the bottom floor to separate ends of the firehouse. Each side was identical — one side for the Atlantic volunteers and the other for the Button members. They each had their own living quarters, meeting rooms, and chief’s offices.

“They even had their own slide poles,” Williams says, walking around the now-empty firehouse that’s being returned to its historic state as an expansion to the firemen’s museum.

He says the only shared living space was a second-floor veranda.

“Apparently, that’s where they got together once in a while to smoke or something and talk,” Williams says. “It was a very gradual elimination of the break between the Northerners and the Southerners. Even into the 1950s, they weren’t the greatest of friends.”

As time went on, however, the old schisms forged in the wake of the Civil War were lost on new volunteers deciding which company to join. “One fireman that I talked to, he said when he joined the department, his aunt told him that he joined the wrong one and that his uncle would turn over in his grave,” Faulkner says. “He didn’t realize there were two departments.”

In 2000, the firefighters moved out of the bifurcated station to the current headquarters down the road. This was about the time the two companies merged under the name New Bern Fire Department, says Richard Blythe, a volunteer firefighter in the city for 25 years and former member of the Atlantic company.

The department now has more than 50 full-time, paid firefighters and 25 volunteers.

The city had numerous chiefs before the merger and the hiring of a full-time chief because it was customary for the top-ranking position to rotate each year between the companies. By the time Blythe started, the storied competition between Atlantic and Button companies had died down. “It was friendly rivalry,” he says. “Some of those guys are still some of my best friends, even from the other company.”

The two companies have their individual histories, but they’re intertwined in New Bern’s firefighting past.

Even fire horses like Fred and Ben are memorialized side-by-side in New Bern’s firefighting museum, despite the fact that they worked for different teams.

In a back room of the museum, a yellowed poem titled “Our Fire Horses” sits in a small picture frame stuck in the corner.

It is undated, although obviously written after the horses’ heyday.

“… if I could have my way I’d bring those old fire horses back from shrouded yesterday,” the unnamed author writes nostalgically.

“One night, when station bells rang out, forth from a ghostly stall
Would charge Big Ben and Jim and Fred, in answer to the call.”