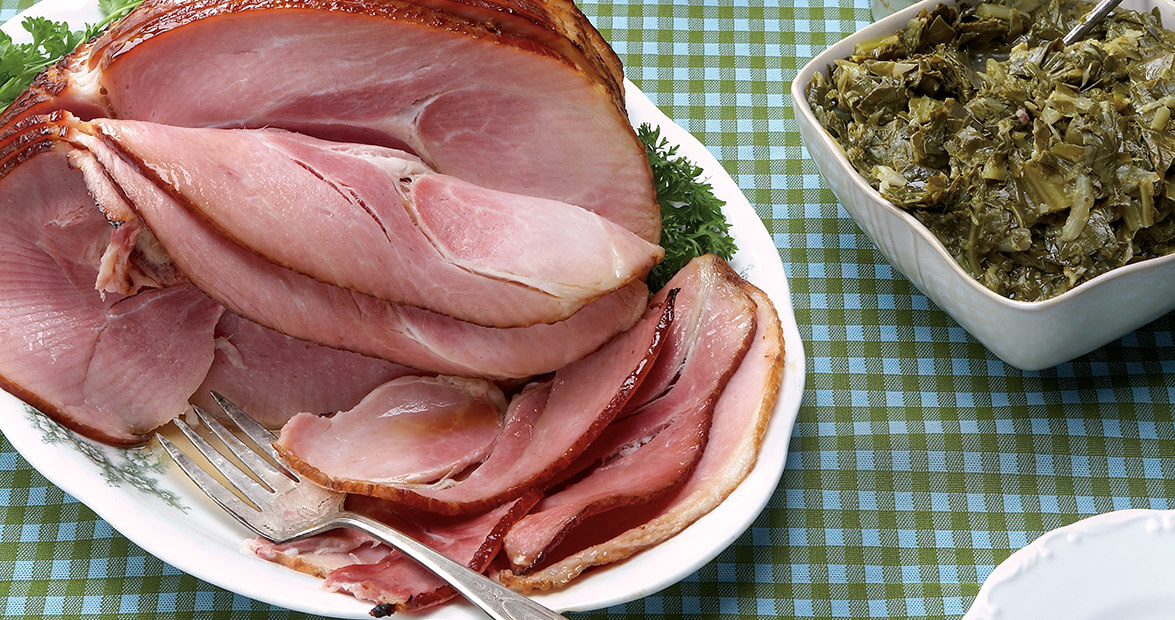 On New Year’s Day, families across North Carolina sit down to dinners of ham, black-eyed peas, collard greens, and corn bread. The superstitious tradition of the New Year’s table supposedly brings prosperity for the coming year, although no one is quite sure why or even where the tradition originated. Some say the financial good fortune comes because peas look like coins and collards resemble folding money. Others claim it’s an inexpensive meal that sets a frugal tone. The meal itself has changed a bit over the years, too. Luck, it seems, is in the black-eyed pea of the beholder.

A century ago, North Carolinians often piled their New Year’s peas around a whole hog’s head, a showy dish that required a freshly butchered animal. “It is good luck to cook hog’s head on New Year’s,” a Union County man once told folklorists. His account is included in a collection of North Carolina folklore assembled by Frank C. Brown in the mid-1900s. But the man didn’t say why the tradition was lucky. Perhaps starting the year with a whole hog’s worth of meat stored away made it easy for a farm family to count its blessings. Others just saved a choice piece of smoked jowl for the occasion. A simple ham hock would do, too.

Fill Your Plate: Goodnight Brothers has been curing country hams in the mountains near Boone for more than 60 years. In partnership with the North Carolina Natural Hog Growers Association and Whole Foods Market, the company offers hams from hogs raised according to animal-welfare standards.

Black-eyed peas have been considered lucky for centuries. They’re an ancient tradition at Rosh Hashana, the Jewish New Year, and slaves ate them for luck not only on New Year’s Day, but also on Good Friday and whenever they felt in need of special help. Most white Southerners didn’t think much of black-eyed peas until the Civil War left them with little else to eat. Then they, too, thought of them as lucky, and peas became a New Year’s fixture. As long ago as the 1920s, a sign on a Piggly Wiggly in Raleigh reminded shoppers: “Eat black-eyed peas on New Year’s Day for good luck.”

Fill Your Plate: Don’t try to buy fresh black-eyed peas in December; they’ll be stale from refrigeration. Sunny Creek Farm in Tryon grows peas during the season and then dries them for preservation. Visit sunnycreekfarm.com to learn where to find them.

Collards are often the only fresh vegetables left in the garden come January, but only recently have people made sure to eat them on New Year’s Day. Greens are a common New Year’s dish in other countries, too, such as kale in Denmark and sauerkraut in Germany. A few generations back, many North Carolinians called for cabbage with their holiday pork, while others insisted that pumpkin was the lucky vegetable.

Fill Your Plate: Collard greens will be everywhere the week before New Year’s, but farmers markets will have the best greens, and many markets have winter hours. Visit ncfarmfresh.com, a service of the N.C. Department of Agriculture, to find one.

Used to be, hardly anyone mentioned corn bread as essential to the New Year’s Table. Why? Because used to be, it was a staple at most Southern meals. Nowadays, corn bread represents more of a once-in-a-while treat on our plates. Like with black-eyed peas, what we eat for our first dinner of the year reminds us of our roots. New Year’s Day is not only a time to look forward, but also to look back. And around the table. As another North Carolinian told folklorists Paul and Elizabeth Green about cooking peas: “Every member of the family must stir the pot.” Whatever you eat, if you do so with people you love, it’s bound to be lucky.

Fill Your Plate: A few mills still make stone-ground cornmeal. Selma’s Atkinson Milling Company has been around since 1757. Or check out Old Mill of Guilford.