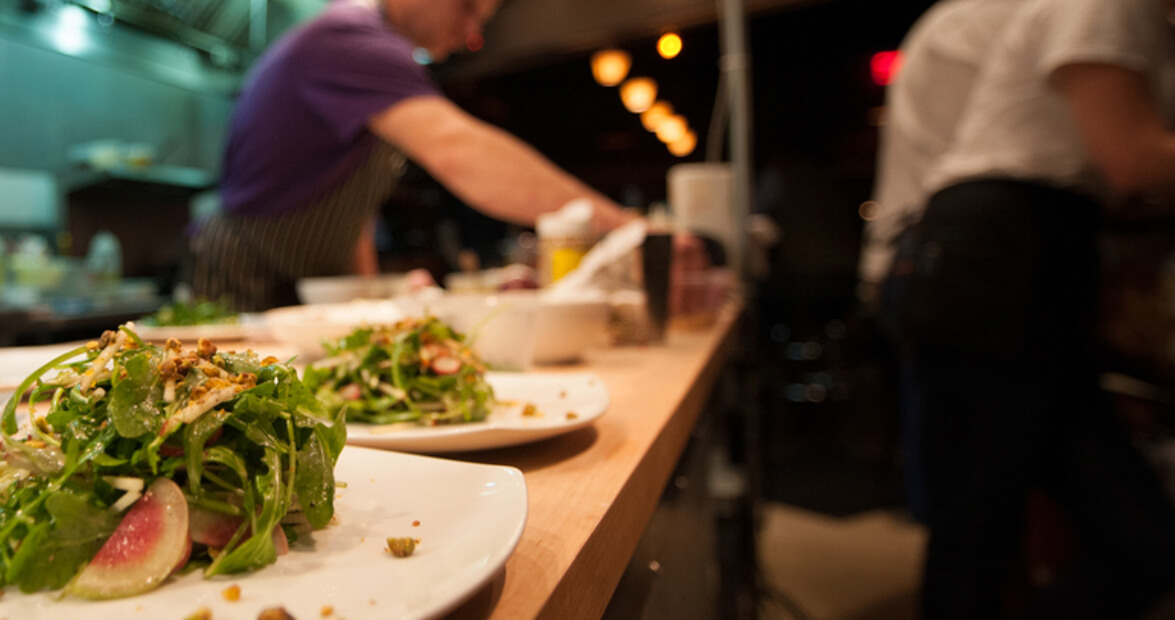 After honing their world-class culinary talents in New York City, Stephen and Inez Ribustello brought them to eastern North Carolina, where Inez’s family has lived for generations. In 2002, Inez’s father surprised the couple with the opportunity run a restaurant that had recently gone up for sale in downtown Tarboro. “We went ahead and gave it a whirl,” Stephen says. They weren’t sure how’d long they’d make it. “Now we’re here 13 years later,” he says. It’s a testament to the restaurant’s loyal fan base. The dinner menu changes each week, so don’t let fall pass you by without first trying On the Square’s orecchiette pasta dish, complete with tender squash, smoky sausage, and aromatic sage.

Sam and Alyce Ratchford love to show off the town they love through the food they prepare at Vidalia. Sam, who serves as the restaurant’s chef, grew up in the area. While the dishes he creates are gourmet, they’re intrinsically comforting and very much Southern. Not only does the community inspire the food, but the food also inspires the community. It’s what keeps people coming back time after time. “We have one couple that we’ve seen every Friday evening for the last eight years,” says Alyce, who is the general manager. “It’s very flattering.” Vidalia’s menu changes seasonally, so expect to see ingredients like chestnuts, okra, and pumpkin on the menu this fall.

When you drive down Main Street in Cornelius, you’ll see a bungalow-style house with distinctive plum-colored decorative shingles. Stop. Step onto its wraparound porch. Now, stay awhile. Even before the food arrives at your table, there’s something inherently alluring about Fork!, and chef and owner Tim Groody says there’s a reason for that. “We want people to feel like they’re friends at home,” he says. The simple concept of sharing is the ethos that drives this surprising culinary find. Those who dine here pay no mind when friends pick off of their tapas-style small plates because, hey, we can always order more. Start off with the smoked pork dumplings and save room for the roasted sweet potato fingerlings, which are simply prepared and drizzled with molasses.

The name for Stanbury came from the most unlikely of places: a scrap yard. Joseph Jeffers was digging around when he found an old street sign for a Stanbury Road. Despite its name’s origins, the restaurant is everything a scrap yard isn’t. Jeffers owns the restaurant with brother Will, chef Drew Maykuth, and Andrew Shepherd. He views Stanbury as “a balance between comfortable and refined.” Modern light fixtures envelop the room with soft, warm light, and the eclectic décor hanging from the walls makes the place reminiscent of a speakeasy. The majority of the food is grown and raised in North Carolina. In fact, the restaurant even sources much of its produce from Old Milburnie Farm, which is run by an old buddy from Warren Wilson College. Though the menu since it changes daily, Jeffers promises that “fall is our chef’s favorite season.”

You might think that a restaurant’s proximity to the ocean means the fish you’re eating is — by default — locally sourced, but that isn’t always the case. At many seafood joints, the gap between our waters and our plates has widened recently due to issues of affordability and availability. But as owner and chef of Surf House, a farm-to-table restaurant in Carolina Beach, Craig Love is offering a change by vowing to support local fisheries and fishermen. He’s doing so by serving sustainable, lesser-known-but-equally-flavorful alternatives to the fish you’re typically used to seeing on a menu. Instead of mahi-mahi, try the amberjack. Instead of sardines, there are mullets. “We really wanted to put a flag in the ground to highlight what we think is great about the Southeast’s waters,” he says. Fall means oyster season, so don’t miss the mollusks at Surf House, where they’re showcased several different ways.