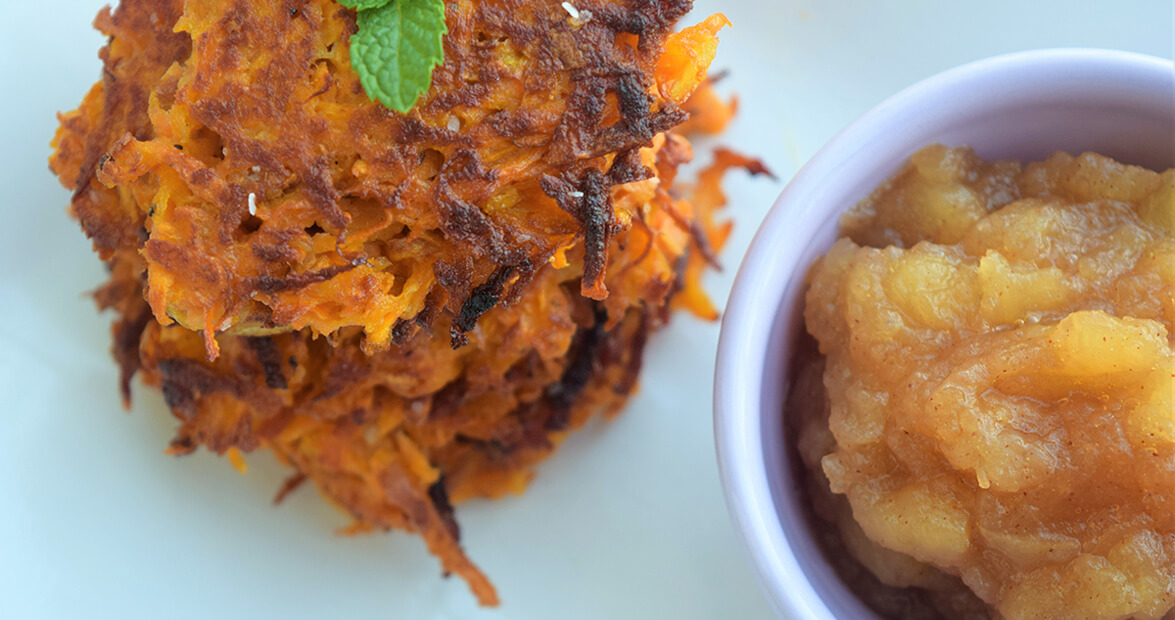 When I was fifteen, I hid a six-foot Christmas tree in my closet.

Wait, you haven’t heard the weirdest part — I was raised in a Jewish, albeit progressive, household. So not only was it abnormal to covertly drag a giant fir up the stairs of my parents’ house, it didn’t exactly mesh well with our menorah.

I always felt somewhat excluded from my peers during the holiday season as the majority of them got to share homemade cookies with Santa and hang stockings on their mantels. Despite my envy of their December traditions, there was one delicious Hanukkah ritual that I wouldn’t trade for all of the flying reindeer in the world: making latkes.

The starchy aroma of toasted oil would perfume the air as my sister and I would peek into the kitchen, where my dad would lower forkful after forkful of potato shreds into a spattering pan. As the wispy ends would bubble and hiss, he’d flick a spatula and rotate each golden patty. We’d hear a sudden pop! as my mom twisted the lid off the cinnamon applesauce and divided it among multicolored ramekins. Soon, salty spuds would appear under my nose, boasting crispy edges, fluffy centers, and sharp bites of onion and tangy apples. The evening would come to a close as our menorah’s first candle whispered goodbye, leaving a sweet, smoky trace and the reminder that there were seven more blissful nights of potato pancakes to go.

I still call North Carolina home, so today I recreate these tasty childhood memories in my kitchen with lots of local love. My recipe nods to our state vegetable, the sweet potato, and the latkes get a zesty zip from grated ginger. Pair with a homemade spiced Honeycrisp applesauce, which you can surely whip up faster than you can sneak a tree up your stairs.

Grate sweet potatoes and onion on large holes of a box grater. Place grated shreds in a cheesecloth or a kitchen towel and squeeze out as much moisture as possible. Transfer shreds to large bowl.

Fill large pan or cast-iron skillet with ¼-inch oil. Heat over medium heat. Without crowding the pan and working in batches, drop in several tablespoons of batter at a time. Sauté each latke, turning just once, until golden brown and crispy (about 2 to 3 minutes per side). Transfer latkes to paper towels to drain. Immediately sprinkle with salt and serve with a heaping tablespoon of the Honeycrisp Cinnamon Apple Sauce.

Note: If you’re not serving the latkes right away, keep warm in the oven on low heat while you fry the remaining batter.

In a large saucepan, combine apples, water, lemon juice, brown sugar, cinnamon, vanilla, and salt over medium heat. Cover and simmer until apples are soft, about 15 to 20 minutes. Mash mixture with potato masher. Serve at room temperature or chilled.