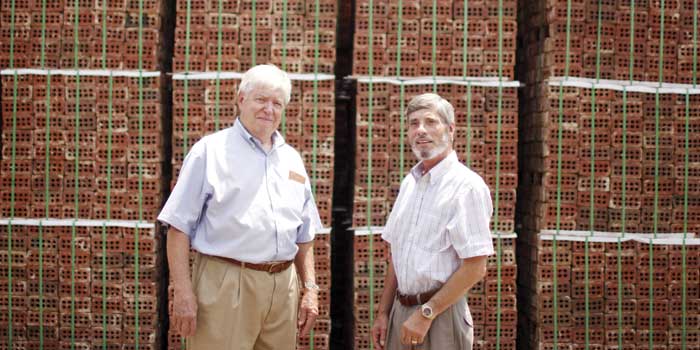 Sonny Rankin studies the bricks in your home, your school, your business. Often, he can tell you the name and maker of the brick.

His business partner, Mike Foster, has bricks in his blood, too. When he and his wife honeymooned in Hawaii in 1984, he made a cab driver stop so he could inspect a bank of clay that caught his eye.

“It did surprise me a little bit that there was red clay there,” says Foster, who pinched some dirt from the bank and rolled it between his fingers to test the grittiness. His bride understood.

“Back then, I was in production all the time,” Foster says. “She was used to it.”

Born to their trade but passionate by choice, Rankin and Foster run Statesville Brick Company, a 107-year-old outfit that is the state’s oldest family-owned brick operation.

For more than 300 years, North Carolina has been thick with bricks, thanks to the raw material — native red clay. Early on, brick works rose next to rivers, where the water deposited clay, particle by particle, eon by eon, over bottomland. Most bricks were used locally. Then came rail, and bricks took off.

“There was an old adage — my father told me this — that if you followed a railroad long enough to cross a river, you’d probably find a brick plant,” Foster says.

During the post-World War II building boom, North Carolina was the brick capital of the nation, producing more than any other state. Most plants were in the Piedmont region, where population, demand, and raw materials intersected.

Today, North Carolina remains strong in brick-making; it ranks No. 2 behind Texas, the home of Acme Brick, a giant manufacturer owned by Berkshire Hathaway. But automation, acquisitions, and a nasty recent recession shrank the pool of brick-makers.

In North Carolina, the number of manufacturers dropped from about 30 in 1960 to 13 today. Seven of the surviving companies are owned by North Carolina families. That’s probably more homegrown ownership than you’ll find in any other state, says Pete Cieslak, executive director of the Brick Industry Association’s office in Charlotte.

For the record, Statesville Brick started just outside of its namesake in 1904, but by then, company founder J.C. Steele had already been messing with bricks for a while. He molded them by hand on a creek bank in the 1880s. That experience sparked his interest in creating machinery for brick making. For years, he did both, until he sold his interest in the brickyard to concentrate on machinery.

Sonny Rankin’s grandfather E.R. “Roy” Rankin jumped into the brick end of the business at Statesville in 1916. He oversaw construction of a new plant beside clay deposits on the Catawba River. A great flood ripped out the factory before it opened, and Rankin built another plant on higher ground, where Statesville Brick remains today.

Trucks rumble by, carrying loads of clay and shale to the sprawling complex. The riverside clay pits are a thing of the past. Brick-makers no longer use the soft, ultrafine clays required for handmade bricks — machines can strong-arm stiffer clays today — but Statesville Brick still uses local raw materials. It owns about 400 acres of clay deposits in Iredell County and 400 acres of shale-rich land in Rowan County. The bricks contain an even mix of clay and shale, an ideal recipe for strength, color, and texture.

“It’s a good marriage,” says Foster, whose father, H.B. “Bob” Foster, had a degree in ceramic engineering from North Carolina State University and became a partner in the company in 1969. The union of the Foster and Rankin families was good for business, too.

The families updated facilities and grabbed competitive advantages when they could. After natural gas companies pinched supplies and hiked prices in the 1970s, Statesville Brick converted to wood-fired kilns. Although the switch was expensive, it saved money in the long run, and it made possible more subtle brick colors, thanks to ash in the kiln.

They obliged, too, when customers demanded tumbled brick — straight-edge brick that’s intentionally beat up to look old. Think of prebleached and ripped blue jeans. Sonny Rankin and Mike Foster chuckle at the fashion of tumbled brick.

“It’s brick you would have thrown away 35 or 40 years ago,” says Rankin, the company’s president.

“If my daddy was alive and saw me making tumbled brick, he’d fire me,” says Foster, the chairman and CEO.

In 2005, Statesville Brick added a plant that can make straight-edge or tumbled brick with the flip of a switch. Foster calls the facility “the most modern tumbled brick plant in the country.”

Ever since the great recession socked home building — typically the biggest consumer of bricks — Statesville Brick has used only the newer plant to fill orders. Being relatively small and nimble has helped the company stay healthy, Foster says.

“We have never been real concerned with getting bigger,” he says. “I think, in our business, you can overexpand yourself right out of efficiency.”

Architects, contractors, and building-supply dealers from all over the East call the company with their color puzzles. On a tour of the plant, Rankin points to a pallet of red bricks with white streaks. The bricks are popular in New Jersey, but a dealer there can’t find the bricks anymore because a local brick plant shut down.

“We’ll get a cube up, send it to them, and let them see what they think,” Rankin says.

The company doesn’t shy from orders that require tinkering with different formulas. Often the differences lie in sands that are applied to the brick faces before firing. The sands contain oxides that change colors when heated.

“We’ve got one sand we use that starts out green, and when it fires, it ends up deep burgundy,” Foster says.

After refined clay and shale are mixed with water, the bricks are extruded — forced through a mold and cut to length, much like kids do with a Play-Doh Factory — and stacked on small, flat railcars.

The bricks roll through a dryer to sweat out the moisture, then they’re off to face the fire. The tunnel kiln at Statesville Brick burns at more than 2,000 degrees Fahrenheit. Rankin uses his handkerchief to open a port in the side. The window glows bright orange. Heat punches through the opening. Rankin is careful not to get too close. As a boy, he liked to peek into the coal-fired beehive kilns. His mother could always tell what he’d been up to.

“What happened to your eyebrows?” she’d ask, knowing the answer. They were singed off.

Now in repossession of his eyebrows, Rankin believes his ancestors would be proud of the way he and Foster run Statesville Brick. He picks up two finished bricks and clinks them together as if he’s toasting the company’s success.

“If it’s got a good ring, you know you got good quality,” he says, satisfied.

North Carolina’s brick history reaches back to the late 1600s, when brick-making colonists trickled down from Virginia to settle around Albemarle Sound. They ground up clam and oyster shells for mortar.

By the early 1700s, the coastal area was known for making bricks and tiles. The Newbold-White House, built in 1730 in Perquimans County, is the state’s oldest brick house.

Farther south, in New Bern on Pamlico Sound, Tryon Palace, the massive home of royal Gov. William Tryon, was made of brick. The original house was completed in 1770.

Prisoners made the bricks used to build the governor’s mansion in Raleigh. Some of the sidewalk bricks still bear the names of the men who made them. The mansion was finished in 1891 and is on the National Register of Historic Places.

Also on the National Register: the George Black House and Brickyard in Winston-Salem. The home is not made of bricks, but brick-maker George Black, the son of a former slave, started a brickyard behind the house in the early 1900s. During a time when most brick-makers moved toward automation, Black handcrafted bricks known internationally for their quality and durability.

Maria Johnson is an award-winning writer in Greensboro. Maria’s most recent story for Our State was “The Egg Church” (April 2011).