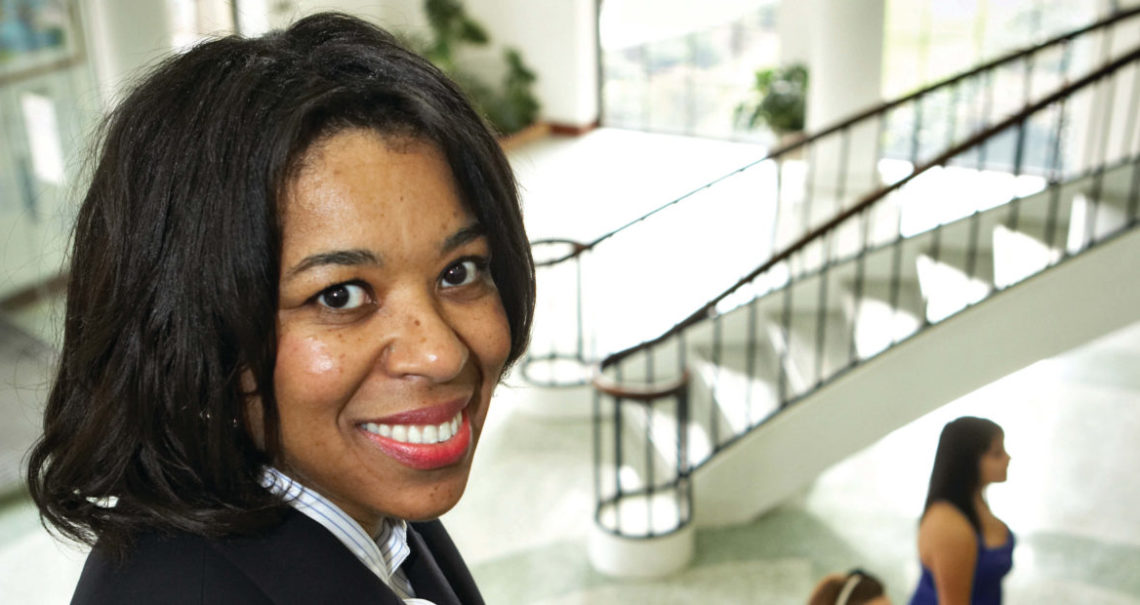 The beautiful rotunda of the Brunswick County Courthouse has a winding staircase on each side leading to a landing on the second floor. On this Tuesday morning, I notice four girls standing on the polished granite floor of the entrance singing their hearts out. Their voices fill the room, resounding off the glass and concrete, and wafting down the halls. People come out of the offices and stand, many still holding their briefcases as they wait for the courtroom to open. Some of the songs are a cappella, the blending of the voices so complete, the harmonies so warm that the listeners, for just a little while, can forget the legal discord that brings them here — to the courthouse where Ola Lewis presides as Senior Resident Superior Court Judge of Judicial District 13-B.

When I think about music at the county courthouse, about the only thing that comes to mind is somebody singing or playing the national anthem for some special occasion. But Ola Lewis doesn’t limit her thinking.

Back in the fall of 2008, Lewis decided that, because the courthouse in Brunswick County is the “people’s courthouse,” it should be a place to celebrate the people: their culture and the collective personality of the area and its heritage. To Judge Lewis, it naturally followed that music was the medium to accomplish all that.

It was natural because music and the arts have been such a big part of her life. “I thought of being a ballerina when I was growing up,” she tells me as we sit in her chambers. It’s an ephemeral statement, passing as quickly as the image of a little girl dressed in a ballet costume springs to my mind.

But the woman before me is not a ballerina. She’s a dignified, cordial, and gracious woman whose life has followed a different course. She continues by saying, “The pursuit of the arts is not only a great path for self-expression; it is also great training for life’s journey — even if that journey leads to the legal profession or any other profession outside the arts. It takes discipline and commitment. It teaches you to organize your time and it also teaches an understanding and appreciation for the talents of other folks as well.”

That’s how the idea for the Brunswick County Courthouse Concert Series came to mind. “I wanted the courthouse to be more accessible, for the people to feel that this was not just a place to come when legal matters brought them here,” Lewis says. “I wanted people to see this building as a positive element in the life of this district, and music seemed to be the key.”

The courthouse is a part of the Brunswick County government complex in Bolivia, the county seat, just down the road from the town proper. The complex is a sprawling conglomeration of fairly modern buildings (built in the 1970s when the county seat was moved from Southport) with large parking lots to accommodate all the folks who have business with the county. Although the courthouse is well-built and commodious, it can be a little intimidating to a visitor. It’s not a picture that encourages a feeling of community.

As Judge Lewis talks about her goal of bringing the community together through music, she recalls that music plays a big part in the history and culture of the country. Military bands play for all kinds of government functions; patriotic songs have become a part of every school chorus repertoire; protesters have written anti-war songs and sung them on street corners; and most important, Americans have used music to record triumphs and tragedies that have occurred throughout our history.

Many of us know the tragedy of war, but also remember the music that has helped get us through those times. As Judge Lewis sees it, that’s the kind of personal music that is a part of this country. “Certainly, we need some encouragement in these trying times,” she says. “I hope that the performances here in the courthouse will be a personal expression of who we all are.”

That’s why there is such an eclectic collection of performers: Dr. Angela Thompson, James Boston, The Sea Trail Songbirds, high school and elementary school choruses, and professional singers such as Dale McPherson and Jeff Krueck. They have all stood in the rotunda of the courthouse on different Tuesdays and, for about 45 minutes, they sang.

Today, the four girls who compose the group Voices of Adonai have brought their personal contribution to the venue. As the group sings an up-tempo song, I watch an elderly lady in the line waiting to pass through the security gate at the entrance. She clutches a walking cane, moving slowly toward the area where the group performs. As she inches closer, she seems to sense the music’s rhythm. She turns her head, looking for the origin of the sound and begins to tentatively shuffle her feet to the music. I don’t know what circumstances brought her to the courthouse today, but for just a moment, they take second place to the music.

But listeners aren’t the only ones affected by Lewis’s dream of making the courthouse more than a building. Tamara, Shanta, KaRisha, and Sheena, the members of the Voices of Adonai, say they “received a blessing.” “We just want to sing,” they say. The young women, all in their 20s, are pursuing a career in music. They’ve auditioned for “America’s Got Talent” and “American Idol,” but “this is special,” they say. “This is home, and we appreciate the opportunity to sing in this place.”

Dale McPherson has been singing all of his life. “I saw the reaction of the people,” he says. “I’ve sung for small audiences and large, and I can tell when the people like what they’re hearing. I could tell they liked what they heard. Ola understands ordinary people, and I appreciate that. I appreciate the opportunity to be a part of bringing the arts to everybody, not just those who can afford to go to a concert. It was a good experience for me as a performer and as a resident of Brunswick County.”

Ola Lewis has brought something new and different to the courthouse in Brunswick County. Like most new things, it may take time for it to catch on. We’ve all heard that art is in the eye of the beholder. But no one will ever know if they never hear it or see it or touch it. Judge Lewis is giving them the chance.

She has reached the highest levels of the legal profession, received honors and accolades, and been recognized by her peers and the public she serves.

But even as her professional contributions become a significant part of the history of the state and country, the people may remember her most for her effort to bring a sense of unity to her community and her appreciation for the unique talents they all possess. And she still loves music. That’s why I’ll bet that deep in her heart there still exists that little girl who wanted to be a ballerina.