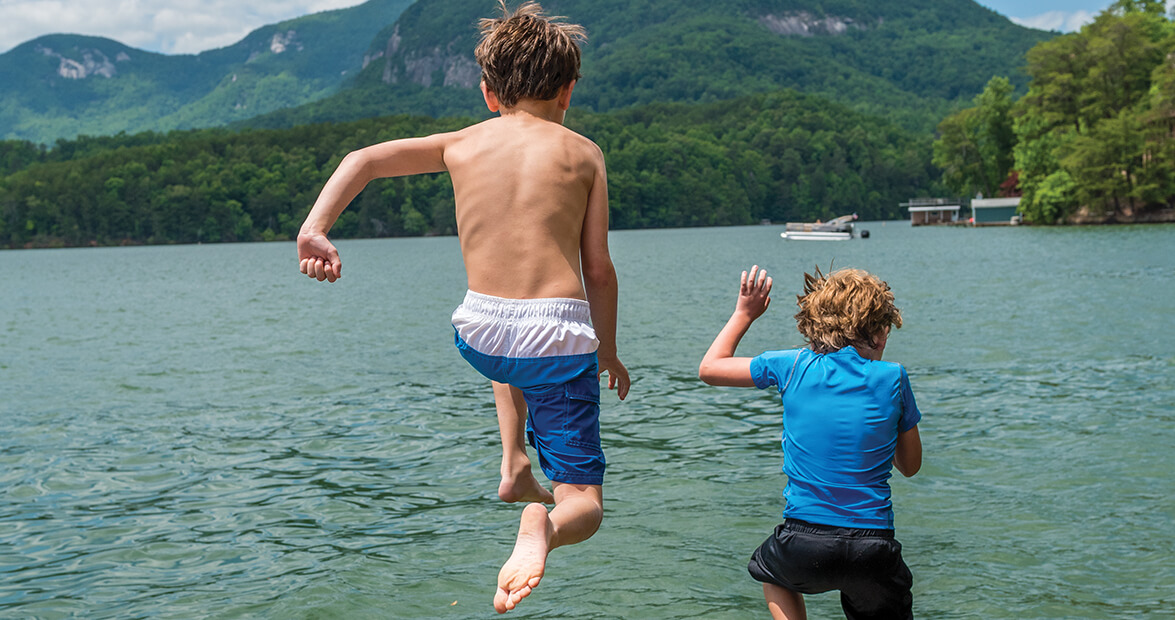 I married a pier person, but I grew up on various docks, and so, if there’s a structure built over water, for me, it’s a dock.

My first vacation memories are of a dock on Lake Lure, where my sister and I would sneak down at dawn while our parents slept behind mildew-spotted curtains at the cottage. We’d bait hooks knotted to string twined ’round a stick with greasy chunks of raw bacon stolen from the fridge. Convinced that fish lurked below the dock, rather than in the open water, we dropped our lines through the gaps between the dock boards. When we caught a fish, we couldn’t pull its flopping, gasping body through the narrow crack. Then we’d wail, and wake our parents, who’d come down to the dock and tell us that eating raw bacon would give us worms.

That dock. We ate picnics and Popsicles on it. We played cards on it. We wrote our names in glittery Fourth of July sparklers on it. We covered it entirely in towels laid side by side and end to end. We made wet footsteps across it to see how fast they’d evaporate. We lay down on its bare boards to dry ourselves in the sun. We wedged rudders of skis in the cracks between the boards, snugged our feet into the rubber booties, and, holding a ski rope tied to the end of the dock, leaned to a 45-degree angle, pretending we could ski as beautifully as our father. One time, I watched him ski right off the dock itself.

The sizes and shapes of docks — even the materials they’re built with — are legion. Rectangles, octagons, varying levels leading one to the other. Two-story docks, with stairs, for people like me and my boyfriend to sneak up to, a dozen years after the fishing incident, and make out under the stars. Pilings of pretty stone. Planters cut into the corners for geraniums and marigolds and cherry tomato plants. Covered docks. Floating docks. Docks with swings, or sliding boards, or screens. With names, with flags, with nets for volleyball and badminton. Docks with electricity, for goodness’ sake. Docks attached to boathouses. And — very important — docks whose ladders have roofing tiles nailed to the risers to combat algae slime. And a split tire or two nailed to one side in case I’m the one driving the boat.

My favorite docks, though, are the ones that you happen upon, or drive past — usually an unassuming single square of weathered wood not far out from the shore. No roof. No boat. Often, they’ve been forgotten or neglected, and look forlorn. Occasionally, there’s a lawn chair or two, one of those scratchy-strapped, old-fashioned aluminum ones. A splintery board might curl up at the end, having sprung its nail. More pond than lake, the body of water beneath such a dock isn’t imposing. Most importantly, it’s the only dock on that pond, minding its silent, solitary business until its owner comes back to fish, or read, or ponder. Or, like me, returns the morning after spending the night with a friend with just that sort of dock to make sure that the grape gelatin salad with nuts and other unidentifiable ingredients, which I’d tipped off my paper plate into the water under cover of darkness, isn’t floating, a smoking gun. Apparently, the fish had liked the aspic more than I.

As long as walking on water is beyond human ability, a dock will be our closest approximation. Fetch your book, your bacon, your line, your lemonade. Spread the towel, the picnic, the checkerboard. Because why aspire to walk on water when you can sit, instead, on a dock?