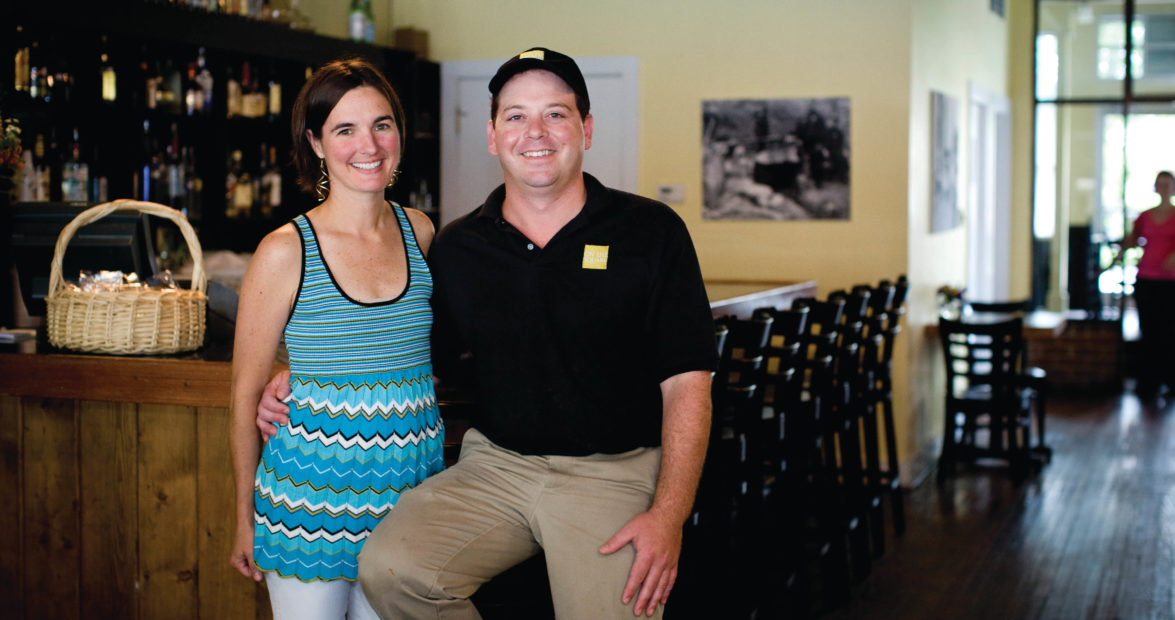 Inez and Stephen Ribustello joke that they’re the only people in Tarboro who are not members of a supper club.

Pleasant, warm, and charming, they’d make great dining companions. But the fact that they run Tarboro’s culinary gem, On the Square — a restaurant that produces cuisine raved about all across the state — serves as a bit of an intimidation factor.

Not to mention, they are the only married couple in the world to have passed the Advanced Sommelier exam issued by the Court of Master Sommeliers. So, you can see why friends aren’t jumping to invite them over for barbecue and Bud Light.

They’ll just see them at the restaurant.

At noon on a Tuesday, the lunch line at On the Square’s cash register features a cross section of Tarboro. Business suits, stilettos, scrubs, and coveralls — anybody who can appreciate a good, chili-rubbed salmon salad and sweetened-to-perfection glass of tea.

The sun streams through plate-glass windows, brightening the yellow walls. Black-and-white photographs matted on canvas tell the story of Tarboro, detailing what was happening around this historic building, which was built in 1871, many decades earlier. A picture of Inez’s grandparents, taken during World War II, gives one reason why the Ribustellos would choose Tarboro as a location for their restaurant: It’s her hometown.

Still, she never imagined being back here. Inez believed that at this point in her life — she’s 34 — she’d only be coming home for visits. “I had a great experience growing up in Tarboro,” she says. “But I was always looking forward to leaving and making my mark on the world.”

That desire led her to the World Trade Center’s Windows on the World, where she was hired as beverage manager and, coincidentally, Stephen’s boss. The two quickly began dating and life was going as planned, until September 11, 2001.

That day, the Ribustellos lost not only their jobs but also friends. Although they wanted to continue to dedicate their talent to Manhattan, they needed a break from the city.

The next year, they spent a relaxing summer in Tarboro, where Inez’s father offered them the opportunity that changed their lives. He and a friend were buying the local diner-style soda fountain, On the Square. If Inez and Stephen would have it, it would be theirs to run.

Stephen, who was a bit skeptical about converting a breakfast and lunchtime staple into a fine-dining establishment, told Inez’s father: “There is no way it’s going to work, but I’ll give you an 18-month commitment.”

Eight years later, they’re still here. The success of the conversion is obvious, just by looking at the staff. Frances Liverman, the former owner of the old diner that stood here, is now On the Square’s manager. On this day, she types lunch orders into a computer while simultaneously swiping debit cards and setting dinner reservations over the phone. Her fervent multitasking is a sure sign that, as Inez puts it, “Tarboro is open to anything,” including small-batch wines and gourmet cuisine fresh from local farms and fisheries.

Buying ingredients — and even the welcoming yellow daffodils on the booths — from local growers is one way Inez and Stephen offer thanks to the town that welcomed them back.

Although the glamour of city life was what they once wanted, their priorities shifted after September 11. “I became less interested in making millions of dollars,” Stephen says. “That’s not what life is about.”

For now, life is about settling into a house beside Inez’s grandmother and watching their children grow. And that’s fine by Stephen. “We’re not going anywhere,” he says. Inez nods in agreement. “I couldn’t imagine raising my children anywhere else.”

They don’t need to leave. The restaurant was awarded Wine Spectator magazine’s “Best of” Award of Excellence. This is quite a feat for a place where a bottle of wine can cost less than $15 and the entrées (fresh fish is the local favorite) are priced so that everyone in town can enjoy them.

The offering of high-style dining at these prices ensures that On the Square remains a place where reservations are recommended. But Southern hospitality dictates that, reservation or not, diners will be greeted warmly and accommodated promptly, often by Inez herself. Monday through Friday at lunch and Thursday through Saturday for dinner, Inez and Stephen relish the chance to share good food, fine wine, and the company of friends.

You could say it’s their supper club.