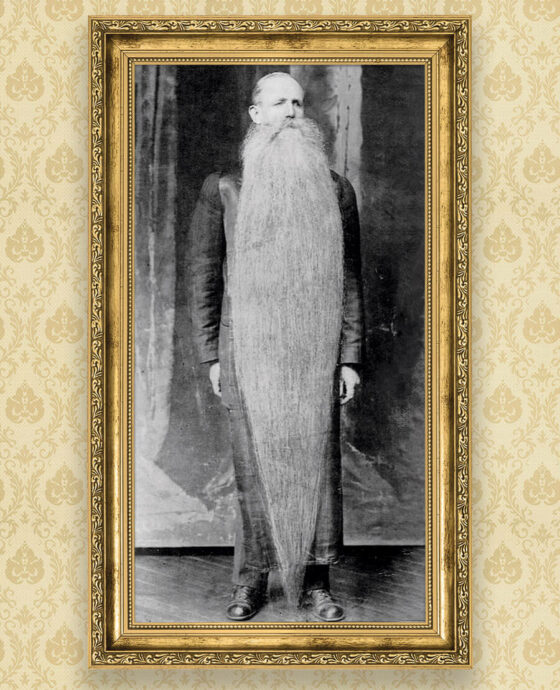 First came stubble, then came trouble: Until he was 21, Sam Brinkley had rarely needed to shave. But when the Mitchell County man’s barely-there beard hit a sudden growth spurt, things got hairy in a hurry. Before he could say “gee whiskers,” Brinkley was shaving twice a day just to keep his face presentable.

By the mid-1870s, when he was 26, he got so tired of shaving that he tossed his razor and — despite his wife’s vehement protests — vowed never to shave again. The beard grew like kudzu, eventually reaching 64 inches long — more than five feet! — at its peak.

By then, Brinkley realized that his bodacious beard could be a blessing. Rather than display the beard for all to admire, he rolled it up and stored it in a specially made pouch, only unfurling it for those curious enough to pay him a dime or quarter to see it — and he made thousands of dollars doing so. Later, Brinkley traveled with the Barnum & Bailey Circus, where he was billed as having the longest beard in the world.

He shampooed and brushed it meticulously, but when a hair tonic company asked him to endorse its product, what did he tell them? Not by the hair of his chinny chin chin! “The good Lord grew this hair on my face,” he said, “and I ain’t lying about it.”

When Brinkley died in 1929, at age 79, he took his beard to the grave with him. His tombstone in a Mitchell County cemetery even features a small photo of Brinkley and his famous beard recessed into the stone — one fitting final tribute to a man and his wondrous whiskers.