Before you throw it away, ask Mark Bannerman.

That gum wrapper? Ask Mark. Those chunks of outdated computer parts? Ask Mark. That handful of glitter? Those bits of useless metal? That orphaned button, spare screw, and disconnected pull tab? Don’t toss any of them without asking Mark.

He’ll probably want them for his art.

In what most people see as trash, Bannerman finds treasures for his collages that capture life in eastern North Carolina. He spins strands of old yarn into roiling surf. He bends strips of used plastic to form weedy marshes and rushing streams. He peels spangled doodads off a scarf and repurposes them as shiny scales on a yellow perch.

Candy wrappers, old magazines, rain-gutter mesh, swatches of burlap, even a single paper clip — Bannerman sees a place for them all in his depictions of farm life, hunting dogs, fish, barnyard animals, and tobacco warehouses.

“It takes it a step further, it really does, from a painting, which can sometimes appear to be flat, no matter how much you change your values and add form to it,” Bannerman says. “Now you’re putting actual something on there, and it can be pretty powerful. The minute you start collaging, it takes it to another level.”

The scraps and fragments lend color, character, and quirk to Bannerman’s art. Ribbons of plastic and rope create rippling fields. Slivers of discarded wood become alligator teeth. And somehow, a petrified frog hops into a picture of a chicken. 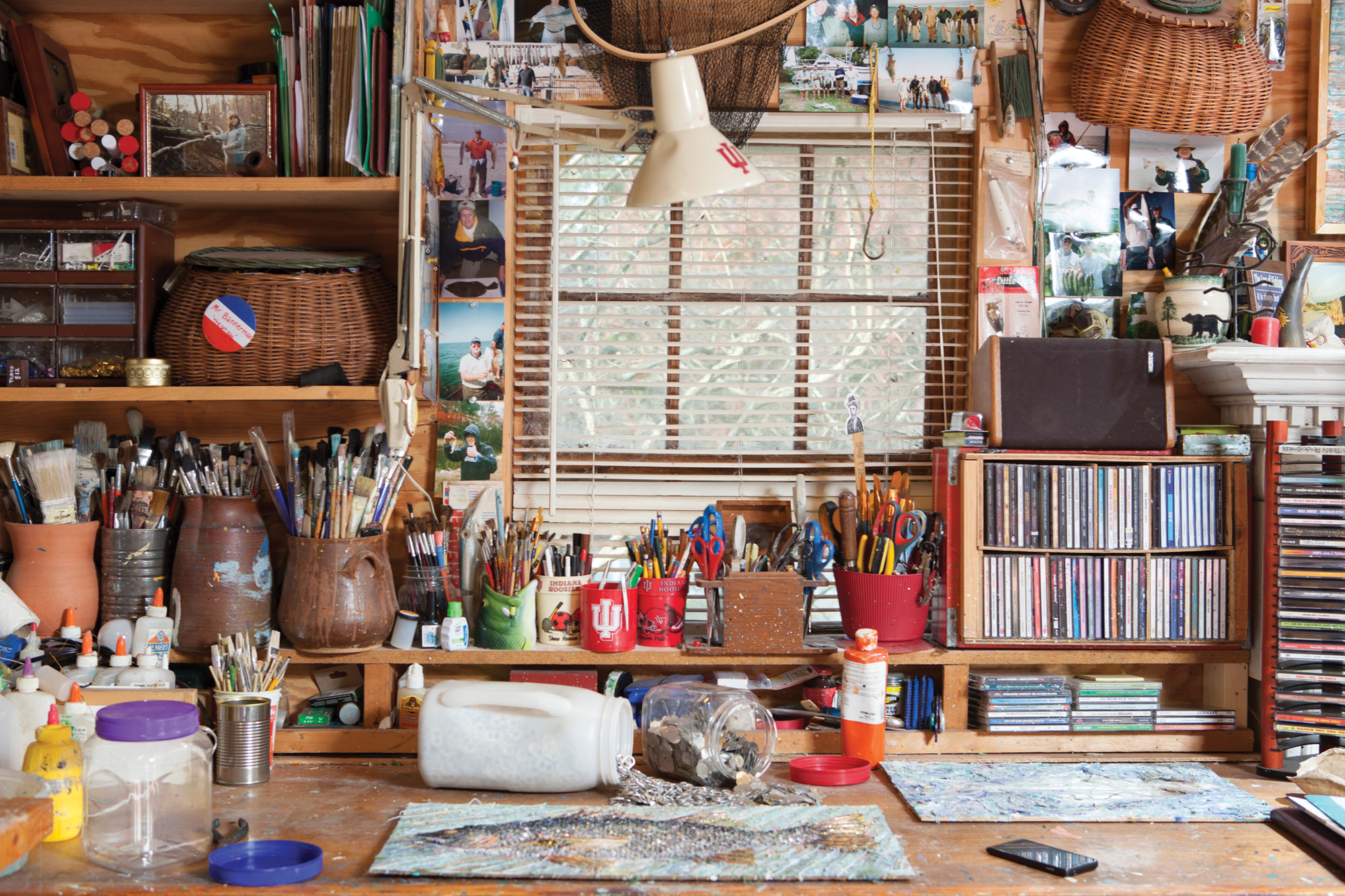 Many of Bannerman’s collages pay tribute to people, animals, and scenes familiar to Columbus County, his adopted home. Born in Alabama and raised in Indiana, Bannerman moved to Whiteville with his wife, Mary Louise, in 1984, taking up residence on the farm that had belonged to his grandparents.

He became the art teacher at Whiteville High School, where he urged his students to experiment with their work and push past merely acceptable results. They regularly won national awards.

Now retired, Bannerman gets ample time in the studio he’s fashioned from his grandparents’ old packhouse. The place itself is a collage — part artist’s lair and part man cave, where easels and sketches share space with a vintage record player, a mirror ball, an aged mule plow, an antique bicycle, and memorabilia from his beloved Indiana University, where Bannerman earned a degree with a concentration in graphic design.

Bannerman sketches nightly, shaping ideas for his collages. His work draws on the techniques of diptych, distemper, and even décollage — tearing away from a work rather than adding to it. He begins with research, often clipping informative words and paragraphs from magazines and mounting them in the background for a little education on, say, a bluegill or rainbow trout. The collaging begins there, the layering and coloring, as Bannerman pulls from his boxes of otherwise useless material to make art that is sometimes bold, sometimes somber, and always intricate. 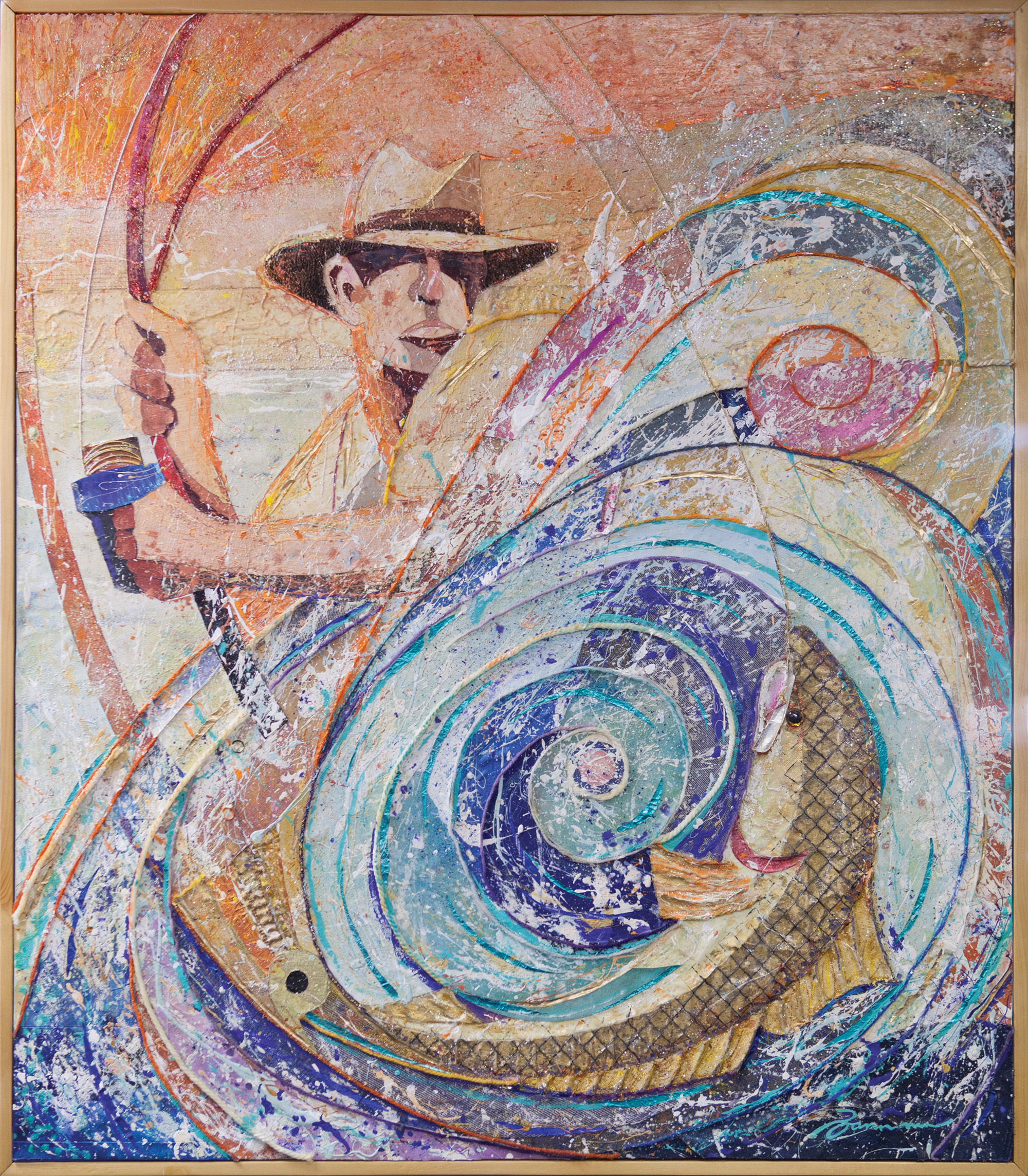 His annual trips to Lea Island, where he fishes for red drum, inspired the piece above.

‘The life that comes out’

These days, you can find Bannerman’s work at the Columbus County Arts Council and at restaurants in Whiteville; Williamsburg, Virginia; and Myrtle Beach, South Carolina.

“It leaves no one indifferent,” says Guillaume Slama, who displays Bannerman’s artwork in his Southern Kitchen restaurant in downtown Whiteville. “Everybody is absolutely taken by them — the collage idea, the texture, the life that comes out of them.”

Mary Louise Bannerman has watched her husband’s work change over the years, growing from acrylic paintings to what he calls “heavy collage” and “assemblage.”

As Bannerman says, art is all about how one sees things.

“When I taught at the high school,” he says, “the first thing I would tell my students is, ‘I want you to look at the world in a different way. I want you to notice things you’ve never noticed before. When you look at a tree, it’s not green — you’ll see yellows and blues and all kinds of color there.’ That’s what I hope my former students have taken with them, that they look at things differently.”

Read about the history behind Mark Bannerman’s studio and see his art at bannermanartstudio.com.