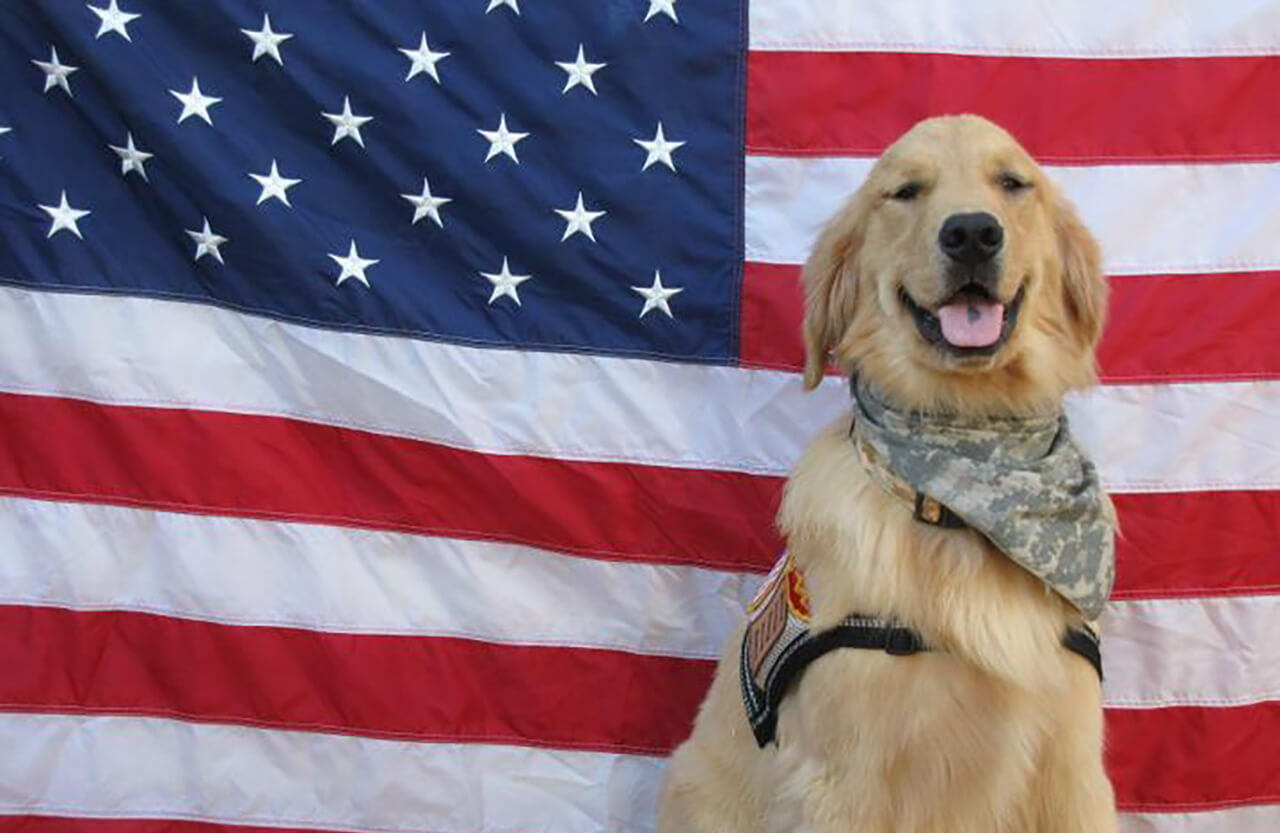 A door — whether it creaks or slams, is bare or adorned with a vibrant wreath, is composed of wood or steel — says so many things, the greatest of which is, “You’re home.”

It’s a welcome sight, especially this time of year, for those who come bearing warm casserole dishes, their arms stretching wide to offer hearty hugs to loved ones unseen for months.

But for many soldiers who return from war, it is these very doors behind which another battle begins.

Like an estimated 11 percent of Vietnam veterans, Miller has post-traumatic stress disorder. It has affected him for decades even though he wasn’t formally diagnosed until after the September 11 terrorist attacks, when his symptoms worsened as a result of horrific images that pervaded the televisions of every American living room. Miller says his illness would cause him to become angry at times, and numb at others.

It’s something that’s hard to believe coming from a man whose sentences become gentler as they trail off into long forgotten Southern colloquialisms.

He sits in the cozy den of his Kernersville home protected by a stately grandfather clock in the corner. His wife of 43 years, Susan, sits across from him, and napping at his feet is the crucial force in his healing mission: a 3-year-old golden retriever named Felipe.

Felipe is a service dog, given to Miller by Patriot Rovers, a homegrown nonprofit out of High Point that not only trains and provides service dogs to veterans with PTSD, but also names the dogs in honor of soldiers who have lost their lives.

His fur the hue of deep amber and his nose always finding itself in the most curious of crevices, Felipe sleeps when he can since he works third shift, Miller jokes. He’s always on guard but has to remain especially alert come nighttime.

“If you have one of these dogs, there’s nothing more calming than to have one just put their head in your hand or on your lap and just look at you with those big, brown eyes,” Miller says. “It’s just so peaceful.” 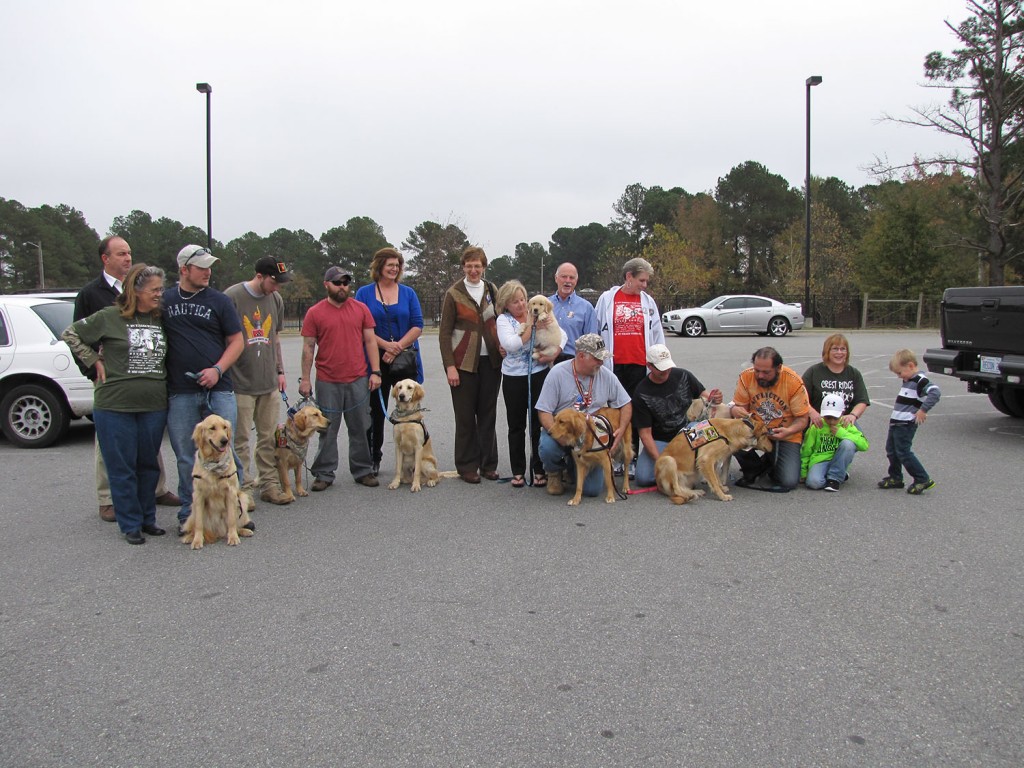 Veterans and families of fallen soldiers gather to celebrate the graduation of newly trained service dogs. photograph by Patriot Rovers

Though PTSD symptoms vary from person to person, for Miller, it’s the nightmares that are particularly aggressive, making it seem as though “the world is falling apart” in his bedroom when darkness falls.

But Felipe knows just what to do to interrupt the nightmares: nudge Miller’s arm, paw his chest, nibble his hand — whatever it takes. To any other dog owner, that’s a sure sign of a pest, but to Miller, it’s a peace of mind. After all, Felipe is just following orders.

The training process for Patriot Rover dogs is extensive, lasting for at least a year and starting when the puppies are just 10 weeks old, says Dave Cantara, the founder of Patriot Rovers and a canine behavioral expert.

How a dog is trained depends on the specific needs of the veteran it’s paired with. These dogs can be taught to complete tasks like retrieve prosthetics, alert medics in case of a seizure, and block others from approaching a veteran suddenly from behind. But oftentimes, it’s the unconditional companionship that veterans need from them the most.

“When they’re in a situation with their families or therapists, they’re fine. But when they’re alone and isolated, that’s when the idle mind is the devil’s playground,” says Cantara, who is a U.S. Army veteran of the Berlin Brigade and 4th Infantry Division.

Cantara’s knowledge of service dogs stems from having a brother who was blind. But his realization of these animals’ ability to bring emotional healing comes from the grief he has experienced in his own life: the sudden loss of his father, cousin, and eldest daughter in her infancy. His younger daughter, who is now healthy, was also seriously ill as a baby and spent much of her early life in the hospital.

“Throughout all that, dogs were a constant stabilizing force for me,” he says.

Now he sits under the florescent light at the kennel he owns and calls roll to me, naming every veteran who has received a dog from the program and all the soldiers who paid the ultimate sacrifice and now have a dog named after them. He’s careful not to leave out their ranks, their hometowns, even their hobbies. As he speaks, his veneer is resilient and firm, but every so often, it gives way to a vulnerable grimace as his throat catches on the details of these soldiers’ pain.

To say Cantara cares is an understatement. These men and women are the reason why he hasn’t allowed himself a day off since 2009. This December, he will have placed 87 dogs with veterans, approximately 65 of which have stayed put right here in North Carolina.

But sometimes the funds are just so hard to find, says Cantara, who has poured not only his heart and soul into this organization, but also his life savings. The expenses add up quickly: $100 per service vest; $800 a year for flea preventative medicine; $1,000 to pay for each veteran’s hotel, food, and travel costs when they come train with the dogs for a week.

“Dave Cantara has given his life to doing this stuff, having to scrape dirt and kiss butts and stuff like that just to get funds to do it,” Miller says. “It’s hard. It’s really hard.”

Despite the fundraising setbacks, many Gold Star mothers of fallen soldiers are endlessly appreciative of Patriot Rovers’ existence. Susan McClamrock is one of them. Her son, James McClamrock, was the first soldier to be killed in Operation New Dawn in 2010. Now, a Patriot Rover dog has taken her son’s middle name, Fleet, in his honor.

“It is healing just to know that someone thought enough about helping someone in the name of your child,” she says. “After you lose a child or a spouse, especially under such horrible circumstances like we all have been through, you just feel like he’s going to be lost or forgotten or she’s going to be lost and forgotten.”

But for Miller to forget the namesake of his dog, Marine Cpl. Felipe Barbosa from High Point who served during Operation Iraqi Freedom, would be impossible. Though Barbosa and Miller served in different wars and never had the opportunity to meet, Miller speaks of Barbosa with a kindred familiarity, calling him a “good, solid, Christian man.”

“To me it’s a reminder of something most valuable that’s been given to me,” says Miller. “Somebody gave up their life, and his name carries that on. It’s actually given me life.”