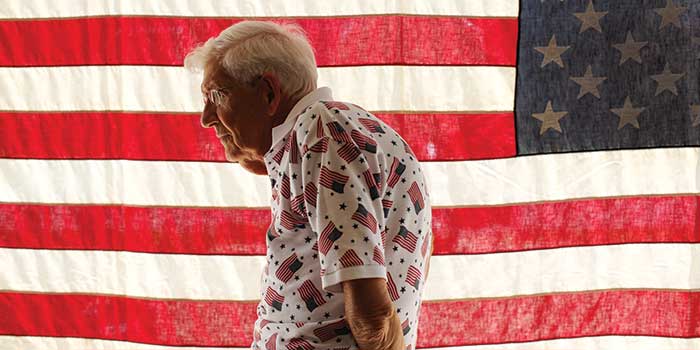 Forty years ago, John Andringa’s first wife, Sue, gave him a gift. She came home from a church bazaar with a flag. She bought it because she saw the words “GRAND UNION” stamped on the binding. At the time, John worked for a grocery chain called Grand Union. Sue thought the flag might have something to do with the company. Instead, it had something to do with America.

What she’d brought him was a copy of the Grand Union flag, considered the forebearer of the United States flag. It has 13 red and white stripes signifying the 13 colonies, and a version of the Union Jack in the upper left corner. George Washington loved the design before we got sideways with the British. The story goes that the Grand Union flew near the Massachusetts headquarters of Washington’s army on New Year’s Day 1776. John knew none of this. He had never thought much about flags. But he decided to find out.

Forty years later, we’re in his house in Gastonia.

He says, “How did you ever guess?”

There’s a flag quilt and flag pillowcases and a flag teddy bear. There’s a flag wastebasket and flag T-shirts and flag photos. There are certificates showing that one of his flags flew in Kosovo and another flew in Iraq.

“It’s a little much, I know,” he says. “But people bring me things now. They’ve gotten to know me as the Flag Man.”

They know John as the Flag Man because, for decades, he has spoken to church groups and civic clubs and school assemblies in Gaston County, and beyond, about flags. He has told thousands of people about flag history. The license plate on his Impala says FLAG MAN. The U.S. and North Carolina flags fly on a tall pole in the front yard. “The most wonderful flag of any country in the world,” he says, “and, in my opinion, the most beautiful state flag in the country.”

John will be 83 this month, and the last time he counted he had 135 flags. He still buys one when he gets a notion. His son, Eric, an Army veteran, sends more. John has a stack of index cards that tell their stories. The cards are feathered at the edges now, he has used them so long. He doesn’t really need them. He knows the stories by heart.

“Everything is a little story with me,” he says.

And he starts to tell the one about himself.

His father served in the Army in World War I. He was a medic in France. He got gassed by the Germans and earned a Purple Heart. One of his best friends was killed the day before the armistice to end the war was signed. John’s father didn’t like Veterans Day.

John grew up in New Jersey. His mother died when he was 16, and the family had a tough time. John enlisted in the Air Force for the Korean War and spent most of it at a base in French Morocco. He had two buddies who were sent to Korea. Neither came back.

When John first enlisted, he trained at a base in Orlando, Florida. A fellow airman who was from Gastonia invited him to come along for Thanksgiving. John met a girl there, but he liked her sister, Sue, better. John and Sue got married when he came back from overseas in 1957. They moved to Wyckoff, New Jersey, where he became an accountant at Grand Union, and she bought him that Grand Union flag.

He started collecting. After a few years, he started putting up displays of his flags around town. He’d pin his index cards next to the flags so people could learn the history. One day, he arrived at a church to put up his flags in the basement. But they had just painted, and they didn’t want any holes in the fresh walls. He started to pack up and go home. But they asked him to stick around and talk about the flags instead. He wasn’t a public speaker. He was so nervous his knees knocked. But he got through it. And he discovered he enjoyed it.

After John retired in 1992, he and Sue moved down to Gastonia. Sue died in 2004. By then, John Andringa was the Flag Man.

He switched churches after his wife died. His new church had lunch in the fellowship hall after the service, but John always missed out because he was counting the offering money. A widow named Margaret sat next to him at the Easter service and promised she would save him some dessert. That Christmas Eve, he proposed to her in his car. They got married in 2006.

By now, Margaret knows almost as much about flags as John does. She folds them into stacks and stores them in satchels. She comes to his talks and holds up the flags while he speaks. She is OK with the flag room.

“We’ve been real busy,” she says. “Sometimes we do two, three presentations a week. Over in Shelby. The churches in Belmont. We go one place, and they tell the others.”

They start pulling flags out of the satchels. “This one’s illegal, probably,” John says. It’s an American flag with 39 stars — created when it looked like Congress would admit the Dakotas as one territory in 1889. Instead, Congress added North Dakota and South Dakota as separate states, and admitted Montana and Washington at the same time. So the U.S. went from 38 to 42 states, and the 39-star flag never officially flew.

But he’d rather tell a story.

“So there was this ordinary man, a lawyer in Baltimore,” John says. “He was told, during the War of 1812, that he was needed to negotiate the exchange of prisoners with the British. This involved boarding a British ship in the harbor. The negotiations didn’t go well. So he went down into the ship to try to get some sleep.

“He was worried about himself and his country. He realized at some point that the ship could just leave with him on board, and then he’d be a prisoner. So he got up and looked outside. He saw the British attack Fort McHenry. He saw the flag still flying. And we all know what he saw, because he wrote it down, and what he wrote became ‘The Star-Spangled Banner.’ That was Francis Scott Key.

“And what I tell people, at that point, is that it could be you the next time there’s a big moment in history. You never know when something’s going to happen.”

Being the Flag Man is John Andringa’s little piece of history. There aren’t all that many people who study or collect flags. (The fancy word for what he does is vexillology.) “He’s a rare guy,” says Barry Austin of Conder Flag Company in Charlotte, where John buys flags. “We don’t have a lot of people who collect. He knows his stuff. Plus, he’s just a nice guy.”

John still gets nervous when he gets up to talk, but now it’s easier. Other parts are getting harder. Osteoporosis has him all stooped over. “I used to be 6-4,” he says, “and now I’m about 5-8.” Margaret has told him to take some time off, but she knows how much her husband enjoys being the Flag Man.

All this time later, and he’s still not sure why he’s so interested in flags. Maybe they remind him of his dad’s time in the service, or his buddies who didn’t come back. Maybe it’s how flags are the touchstones of history. Maybe it’s just the beautiful colors, the symmetry of the stars and stripes.

“Here’s something,” he says. “Our flag is interesting because it can change. Maybe that’s it. It’s one thing, but it’s always changing.”

He thinks about that one for a second, then looks down at his index cards. That might be a good line for the next time the Flag Man speaks.