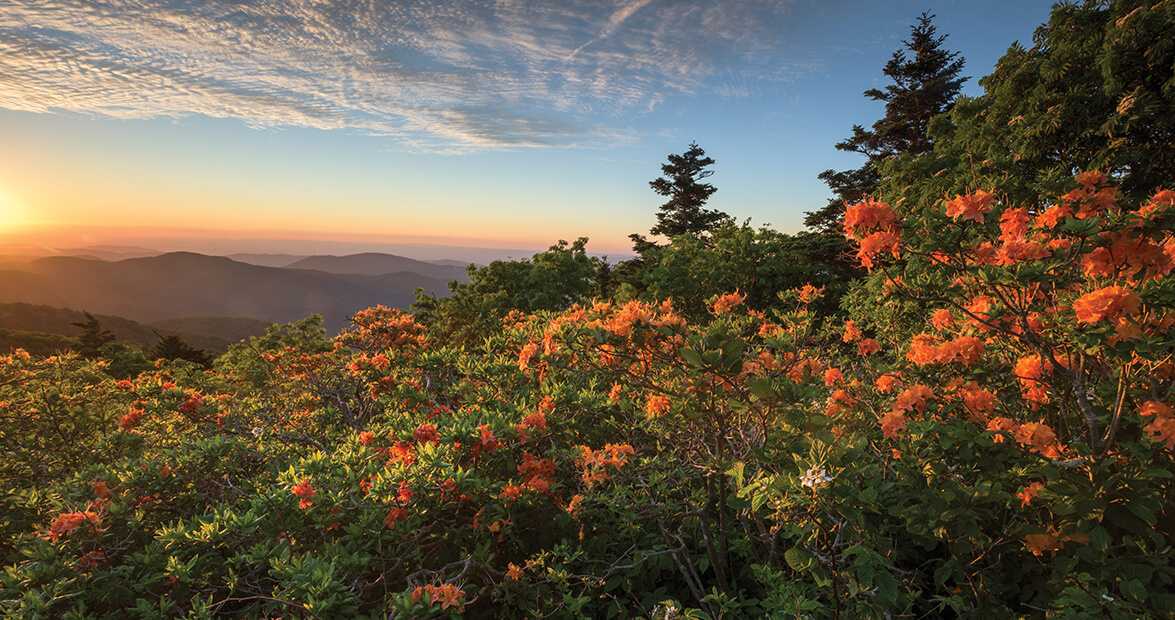 EDITOR’S NOTE: This story was originally published in April 2017 and updated in March 2019.

When pioneering naturalist William Bartram discovered the bright blooms of the flame azalea in 1791, he described the plant as “certainly the most gay and brilliant flowering shrub yet known.” High up on the Blue Ridge Parkway, the open balds of Craggy Gardens showcase these vibrant red, orange, and gold flowers, and hikers who take a closer look might discover another reason for the plant’s descriptive name: buds shaped like candle flames. 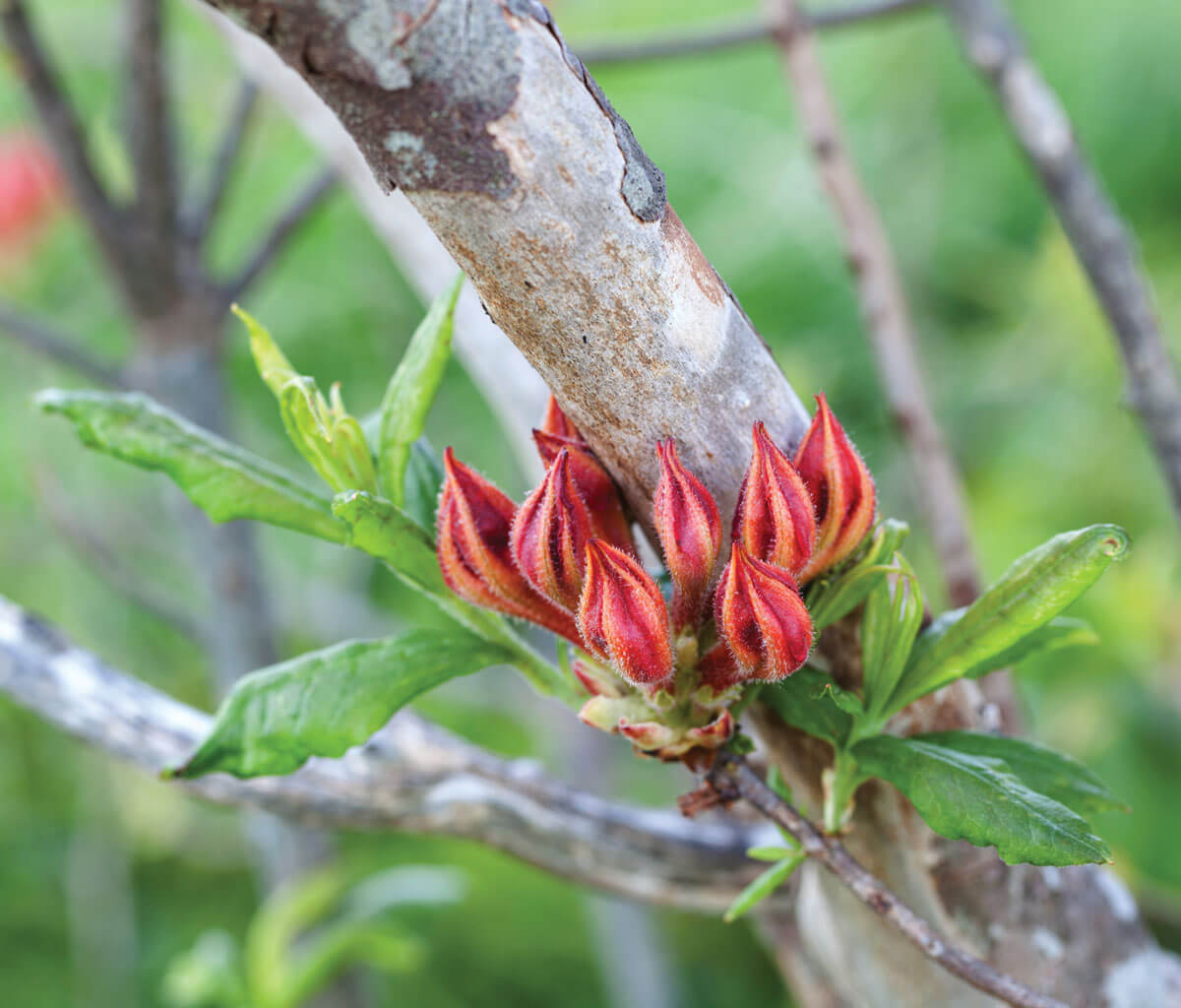 The flame azalea coined its name because of its candle flame-like buds. photograph by Mark Vandyke

The arboretum’s National Native Azalea Repository makes a home for azaleas representing nearly every species native to the U.S. — even some, like the honeysuckle azalea, that resemble a different plant altogether. Spotting an eastern tiger swallowtail butterfly is a happy bonus. 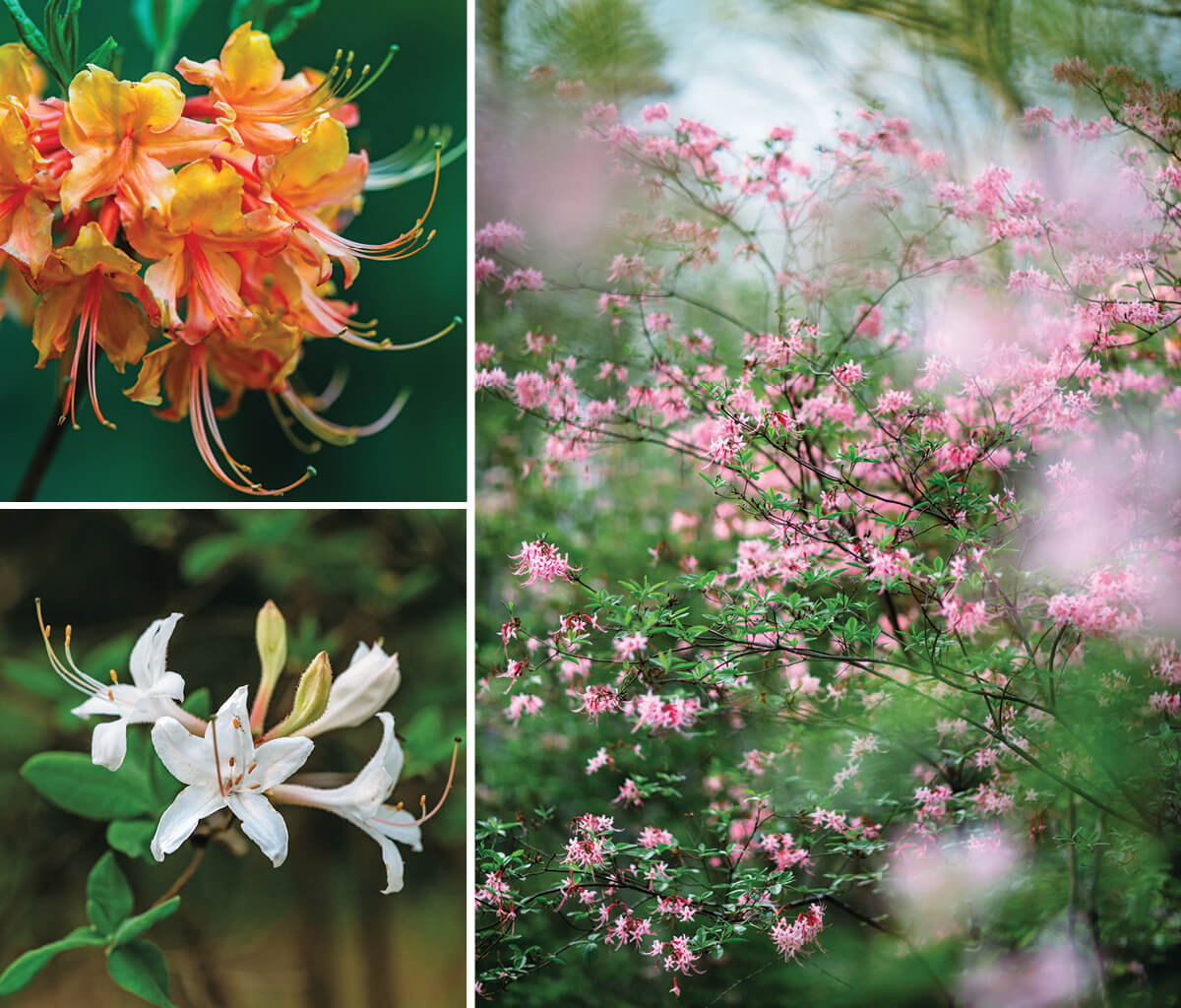 At the North Carolina Arboretum, you’ll find every possible kind of azalea native to the U.S. photograph by Tim Robison

Native only to a few counties in the western part of the state, pinkshell azaleas are more abundant on Grandfather Mountain than anywhere else in the world. Their delicate blossoms open in late April and early May, before surrounding trees sprout their leaves, brightening an otherwise dreary landscape with a touch of pink. 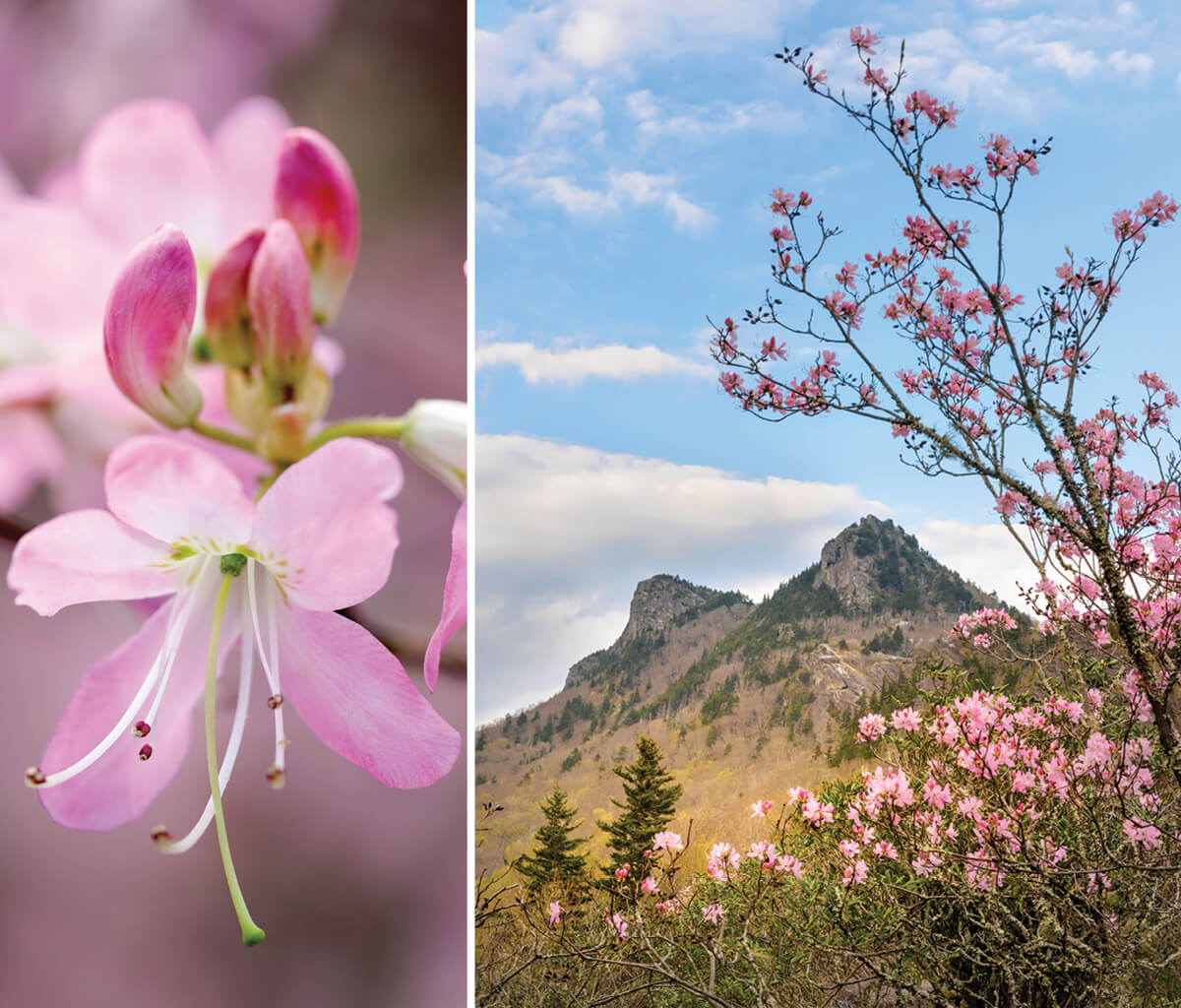 Capitol Broadcasting Company founder A.J. Fletcher built a lasting legacy in Raleigh, but his most beautiful contribution may have been the gardens surrounding WRAL-TV’s studios on Western Boulevard. Fletcher himself designed the paths, determined the best location for benches, and selected the plants, including 1,000 azaleas. Ever since WRAL Gardens opened in 1959, it’s been a sanctuary in the city — a tribute, as Fletcher put it, “to beauty for beauty’s sake.” 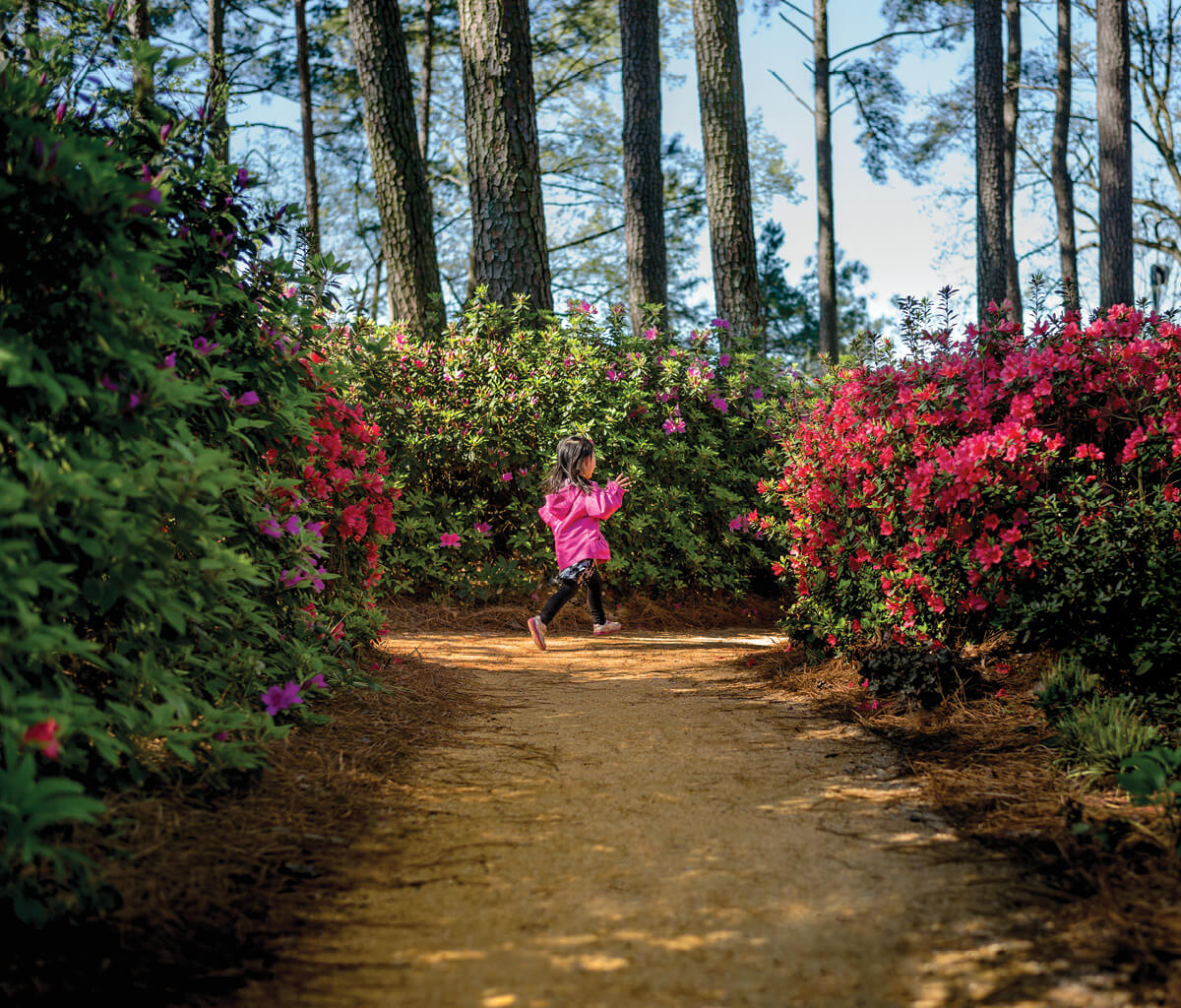 WRAL Gardens is a sanctuary in the city and enjoyed by all. photograph by Charles Harris 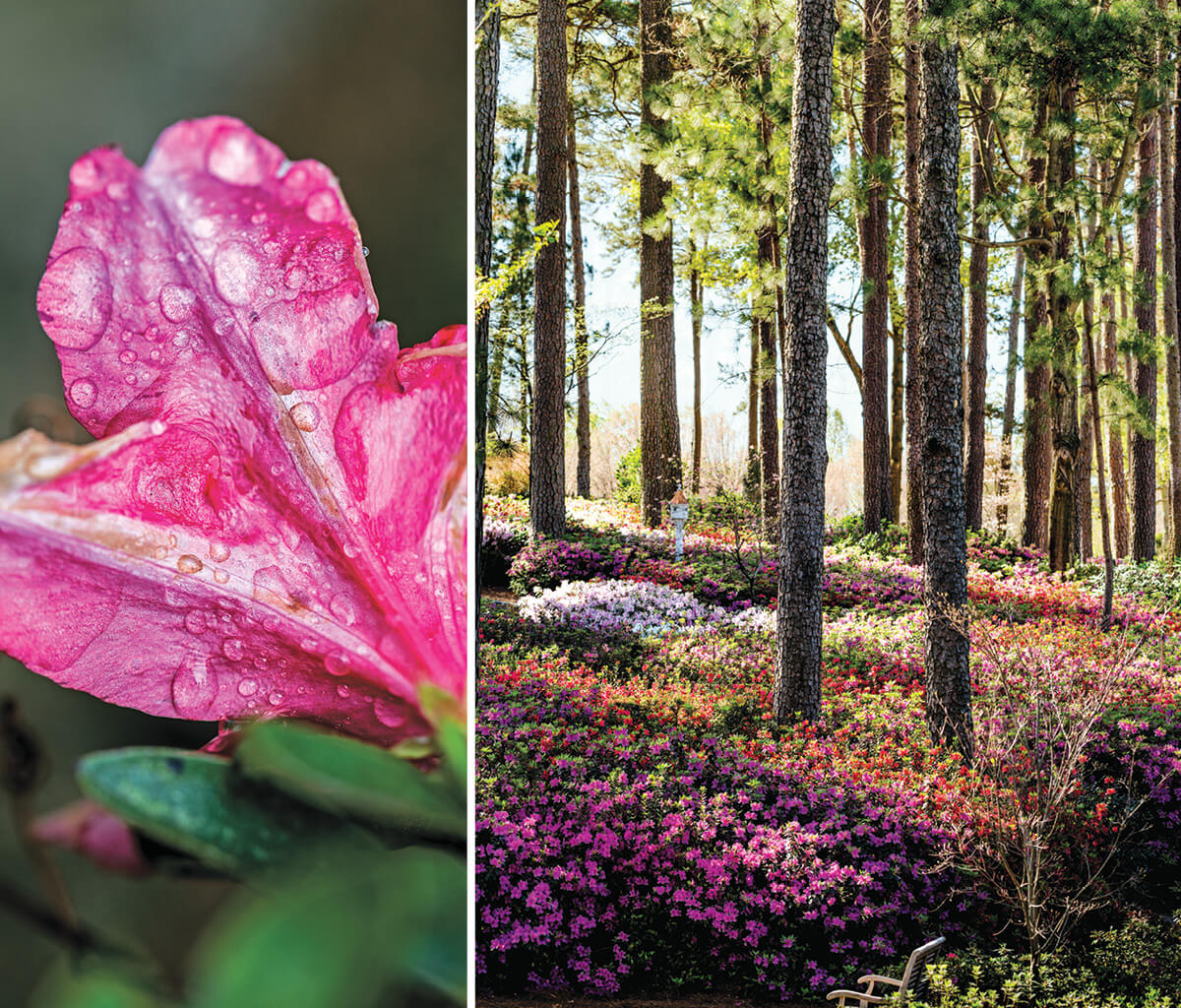 The seed for Duke Gardens was planted by an iris lover. In 1934, Duke University professor Frederic Hanes convinced Sarah P. Duke to fund a garden featuring his favorite flower. But in the years since it opened in 1939, Duke Gardens has expanded its scope, growing to cover 55 acres near the heart of Duke’s West Campus. Azalea Court, added in the 1960s, displays varieties like the Korean azalea, and has become a favorite spot for flower lovers of all ages. 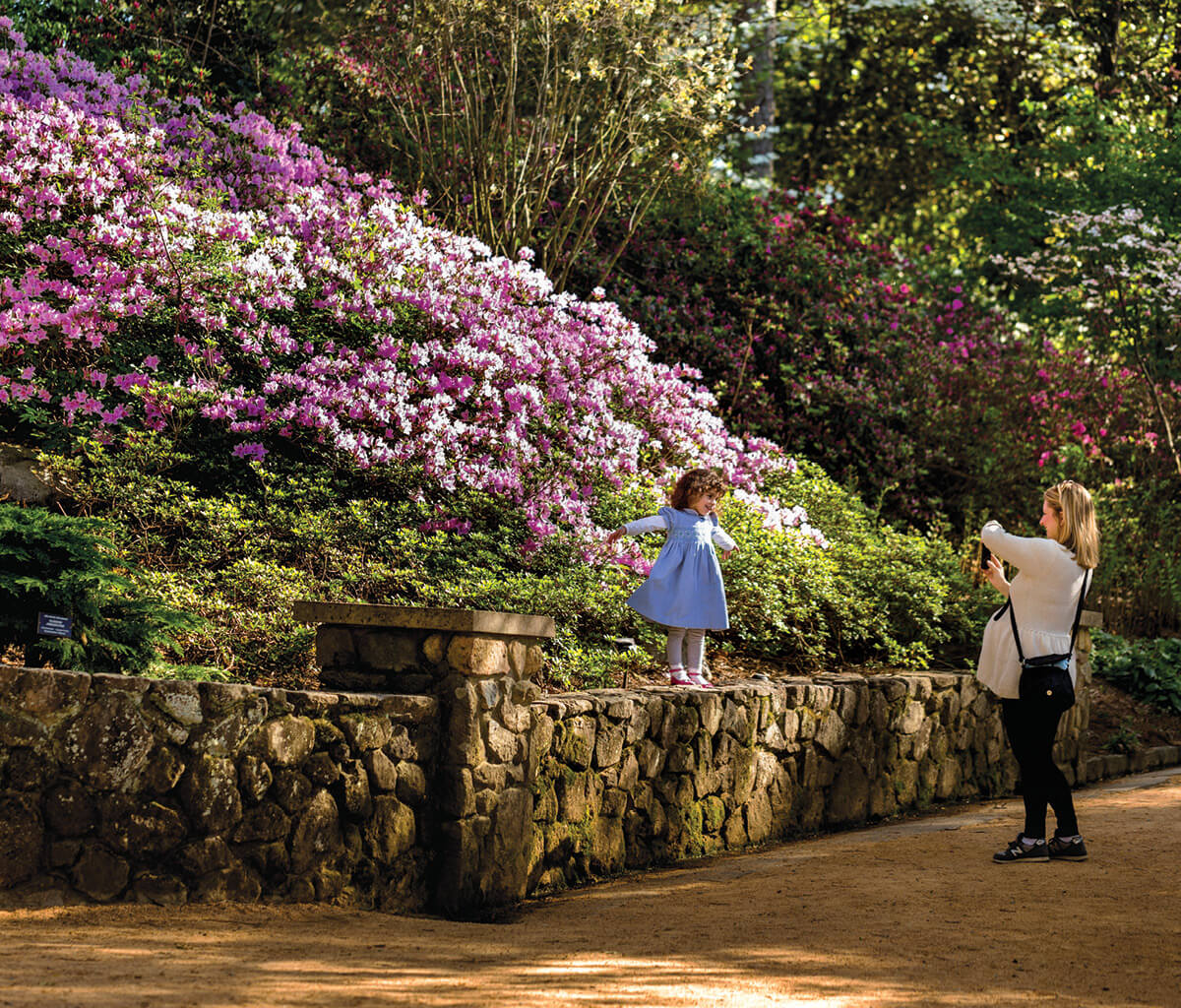 Duke Gardens is a destination worthy of a photo. photograph by Charles Harris

Friendly clusters of azaleas soften the commanding columns and grand facade of the Neoclassical Revival-style Wise House on Market Street. Built in 1909 for the owner of a cotton mill and purchased by Mrs. Jessie Kenan Wise in 1916, the Wise House is now used by the alumni office of the University of North Carolina Wilmington.

Spacious porches, Spanish moss, and sweet azalea blooms — what could feel more quintessentially Southern than springtime in Wilmington? The Wise House azaleas were planted in 1993, yet they make such a perfect companion for this historic home that it’s easy to believe they’ve always been here. 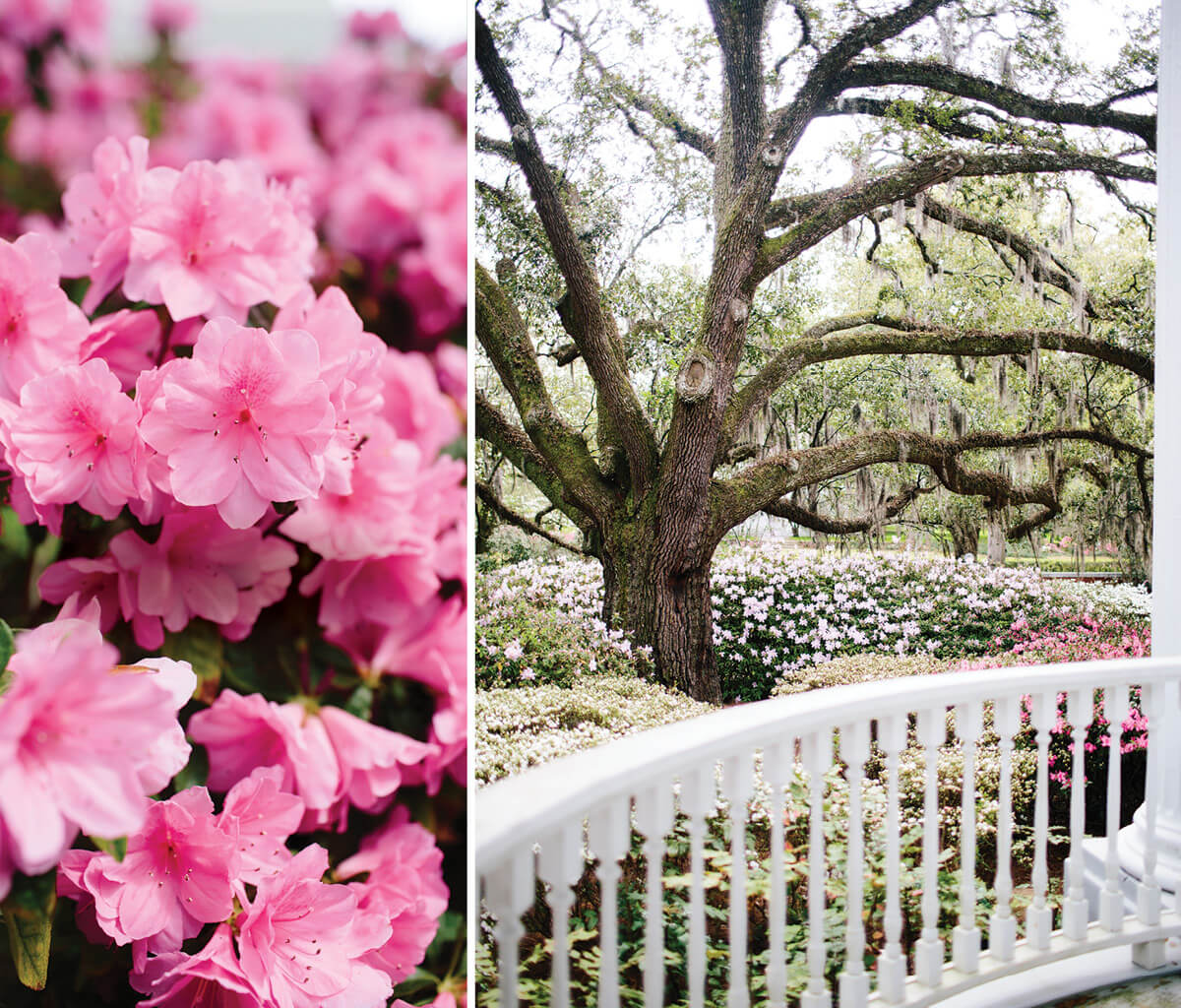 Springtime in Wilmington is filled with azaleas and spanish moss, just pop by the Wise House to witness it firsthand. photograph by Millie Holloman Photography

This month, as music and parade floats fill the streets of Wilmington and fireworks explode over the Cape Fear River, the North Carolina Azalea Festival will continue a celebration that began simply, with one man’s love of flowers.

In 1934, Dr. Houston Moore, who’d been instrumental in the creation of Wilmington’s Greenfield Lake Park and Gardens, had the idea to hold a festival each year “when the flowers burst into bloom.” The first Azalea Festival was held in 1948, and Moore couldn’t have been more pleased, wrote the Raleigh News & Observer: “For 16 years, Dr. Moore has lived, thought, and dreamed azaleas.” 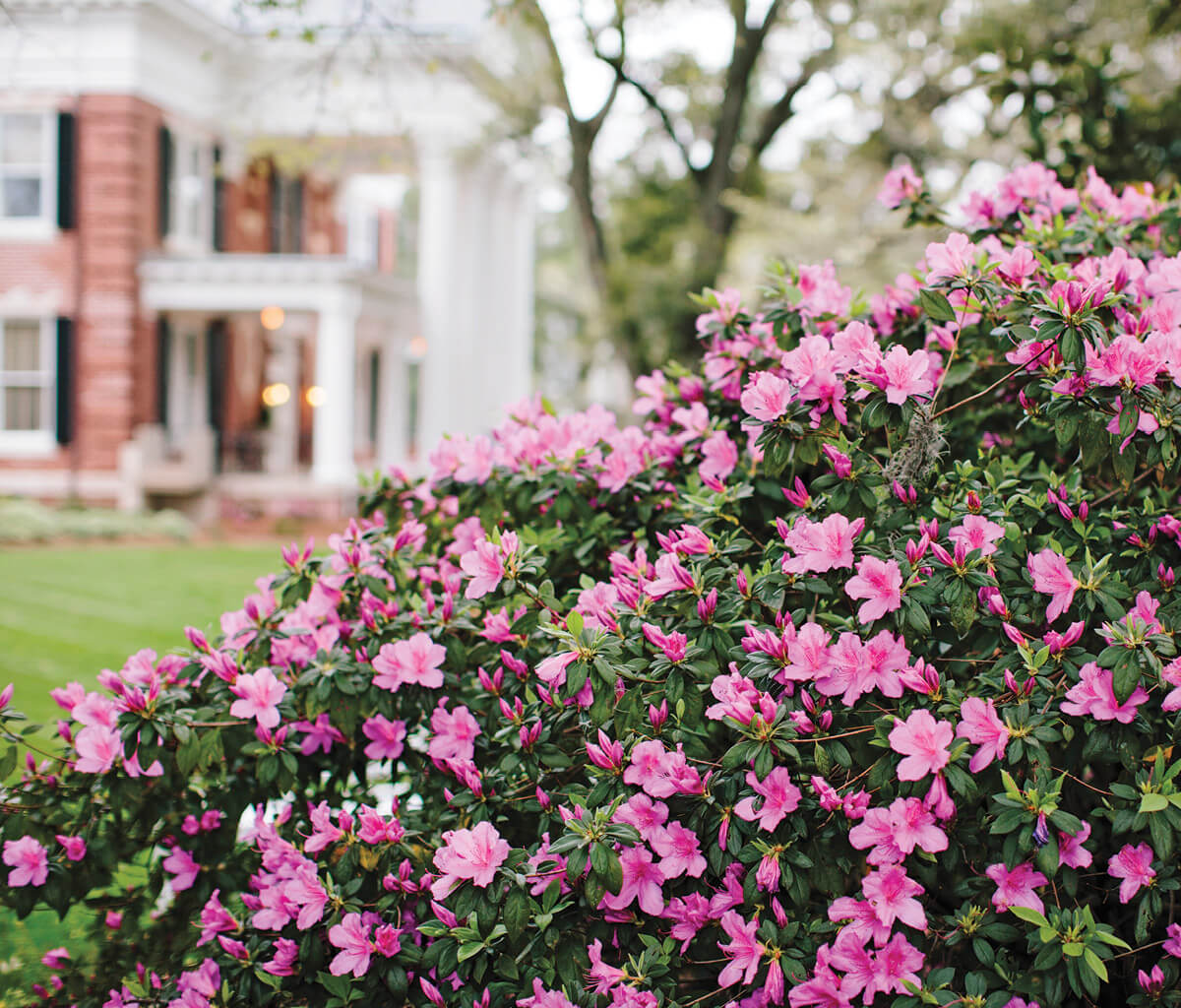 In 1923, Sarah Graham Kenan purchased a house in Wilmington to be close to her sister, Jessie Kenan Wise. Kenan hired landscape designer Earle Draper to plan her gardens, and the azaleas, dogwoods, and boxwoods that thrive around the home — now the official residence of the chancellor of UNCW — closely resemble his vision. photograph by Millie Holloman Photography

No doubt Moore would be especially proud of one of the festival’s most colorful events: the Cape Fear Garden Club’s annual tour of public and private gardens. From April 3-7, a dozen gardens, including historic Airlie with its 100,000 azaleas, will open their gates to visitors. Azalea Belles — young women in hoop skirts as colorful as the flowers around them — will serve as hostesses. And each of these gardeners, who, like Moore, live, think, and dream azaleas, will have their time in the sun.