Friends, welcome to pie season. Oh, I know, you can enjoy pie any time of year. (Trust me: I do.) You can make a pie any day of the week. We just came through another hot, humid North Carolina summer full of pie-perfect Sandhills peaches, mountain blueberries, and muscadine grapes. We can always explore the pie-adjacent categories of cobblers, crisps, and Surry County sonkers. It’s all good.

But fall is when we truly celebrate pie. Thanksgiving is when we can freely contemplate eating several kinds of pie, when we are reminded that just about anything tastes better wrapped in a buttery crust. We thank our lucky stars to live in a state that produces pecans, sweet potatoes, and apples — the holy trinity of fall pie fillings. And to have bakers and bakeries who transform these ingredients into dishes worthy of capping your Thanksgiving Day meal, or starting your next day’s breakfast.

You can find pie anywhere. You can buy a serviceable pie, a pie that will get the job done, at any grocery store. Feel free.

But the difference, my friends, the drum I will bang until my dying day, is the crust. You cannot have transcendent pie — a pie to be thankful for! — in a commercial crust, machine-stamped into a standard foil tin. You cannot.

This crust looks suspiciously uniform. It tastes like nothing, possibly cardboard. You will wonder why you’re bothering to eat it. You might carve out the filling with your fork and leave it. Let us save you the trouble.

We did the difficult work of finding many places across the state to buy your Thanksgiving pie. To find great pie — and remember, you are worthy of great pie — in your area, ask around. Often, the best pie turns up where you least expect it: at church gatherings, school bake sales, farmers markets, and coffee shops — anywhere that a baker might have room to roam and experiment. 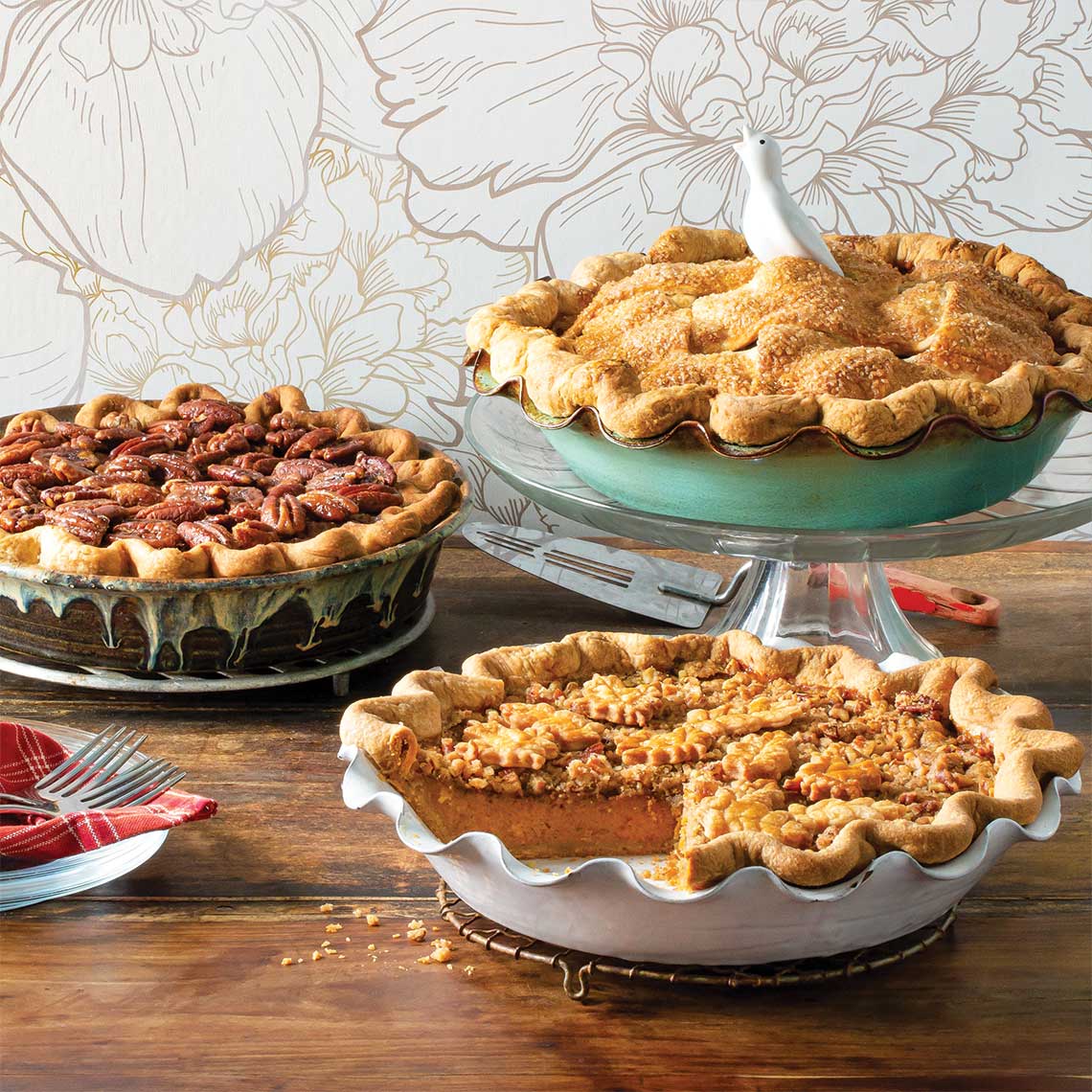 Asheville’s Baked Pie Company is famous for its pie flights, but sometimes, only the whole dessert will do. Serve the bakery’s sweet potato, honey pecan, and apple pies in Muddy Llama Pottery — made by Cathey Chet in Henderson County — for extra mountain magic. photograph by Tim Robison

This Buncombe County bakery has pie flights. Like beer flights or wine flights, but for pie. This is genius, this idea to serve three slices with a scoop of ice cream. Please, let us one day put on our license plates that North Carolina was First in (Pie) Flight.

Why flights? Just one look at Baked Pie Company’s many offerings confirms that a single slice won’t be enough. Owner Kirsten Fuchs has created several variations on fall’s “big three,” including cinnamon roll apple and chocolate bourbon pecan. She’s even invented something called “unicorn pie”: rainbow-cereal crust, pink-tinted vanilla custard, homemade whipped topping, and sprinkles. Frankly, it’s about time that someone thought to bring the joy of sprinkles to the joy of pie. 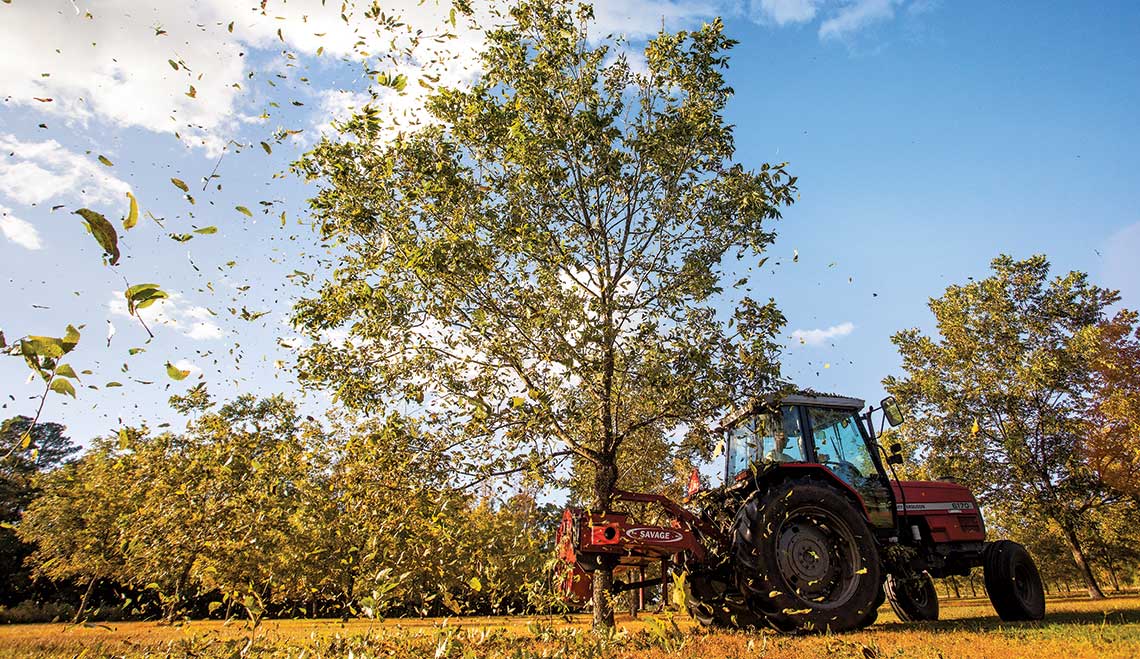 During the fall harvest season, the Taylors use a “tree shaker” attached to the back of a tractor to free the pecans from their trees, unleashing a brief hailstorm of nuts and leaves. photograph by Chris Hannant

With about 2,000 acres of orchards, North Carolina ranks among the top 10 states in pecan production, harvesting three to five million pounds annually, according to the North Carolina Pecan Growers Association. (Georgia is tops, followed by New Mexico and Texas.) Because the soil in North Carolina’s Coastal Plain is good for growing pecans, most of our commercial pecan orchards — like Taylor Pecan Company, a family-owned farm in Bladen County — are east of I-95. Luckily, pecan pie can be found everywhere. 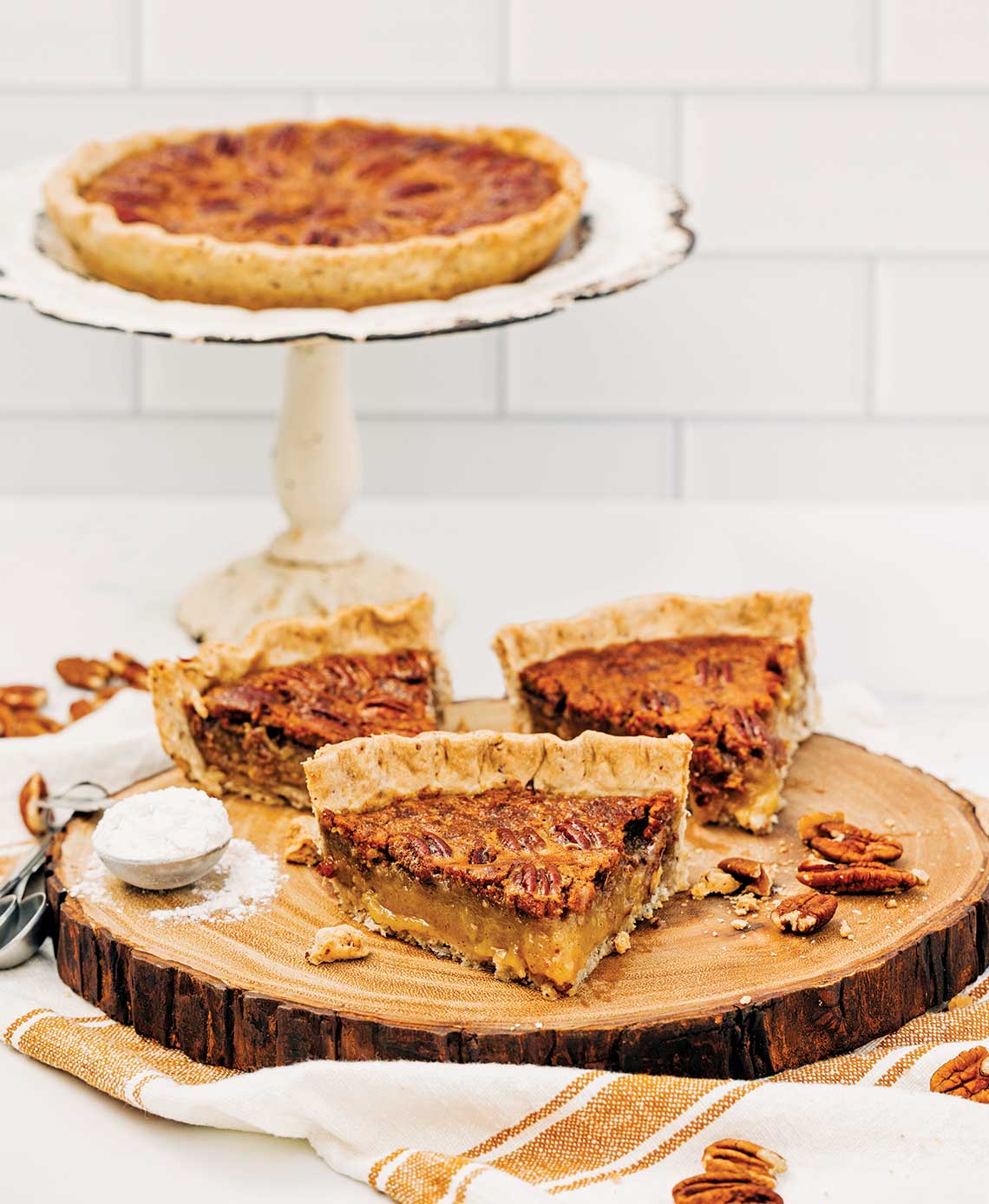 Annalee Johnston, who co-owns The Southerly Biscuit Company with Chef Craig Love, credits their staff and bakers with dreaming up ways to put The Southerly’s stamp on classic pie recipes. For the shop’s famous bourbon pecan pie, that means adding ground pecans to the crust and honey to the filling. They also tip bourbon into the boozy apple pie and make their pumpkin pie with brown butter. 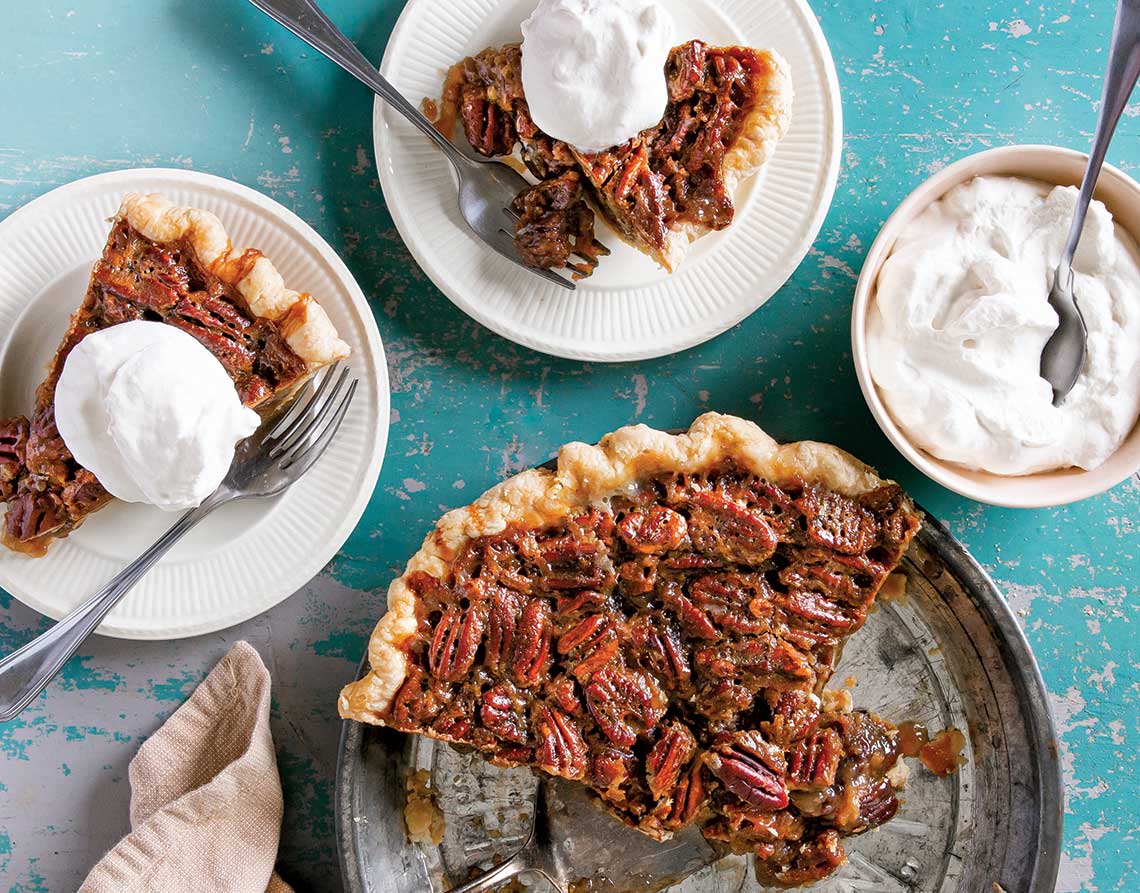 In addition to their honey-bourbon “Sweet Tea” pie, the bakers at Farm to Cake add pecans to hand pies, cheesecakes, and more. photograph by Tim Robison

At Debi Hall’s bakery in Haywood County, pie may be left out of the name, but not off the menu. Hall’s creative take on pecan pie, called The Sweet Tea, is a true North Carolina dessert, made with local honey and bourbon. After a career in computer programming, Hall attended the baking program at A-B Tech Community College in Asheville. She got her start making wedding cakes and was eventually inspired to open her own storefront in downtown Waynesville. In addition to serving customers at Farm to Cake, Hall sells her baked goods at Haywood’s Historic Farmers Market on Saturdays. 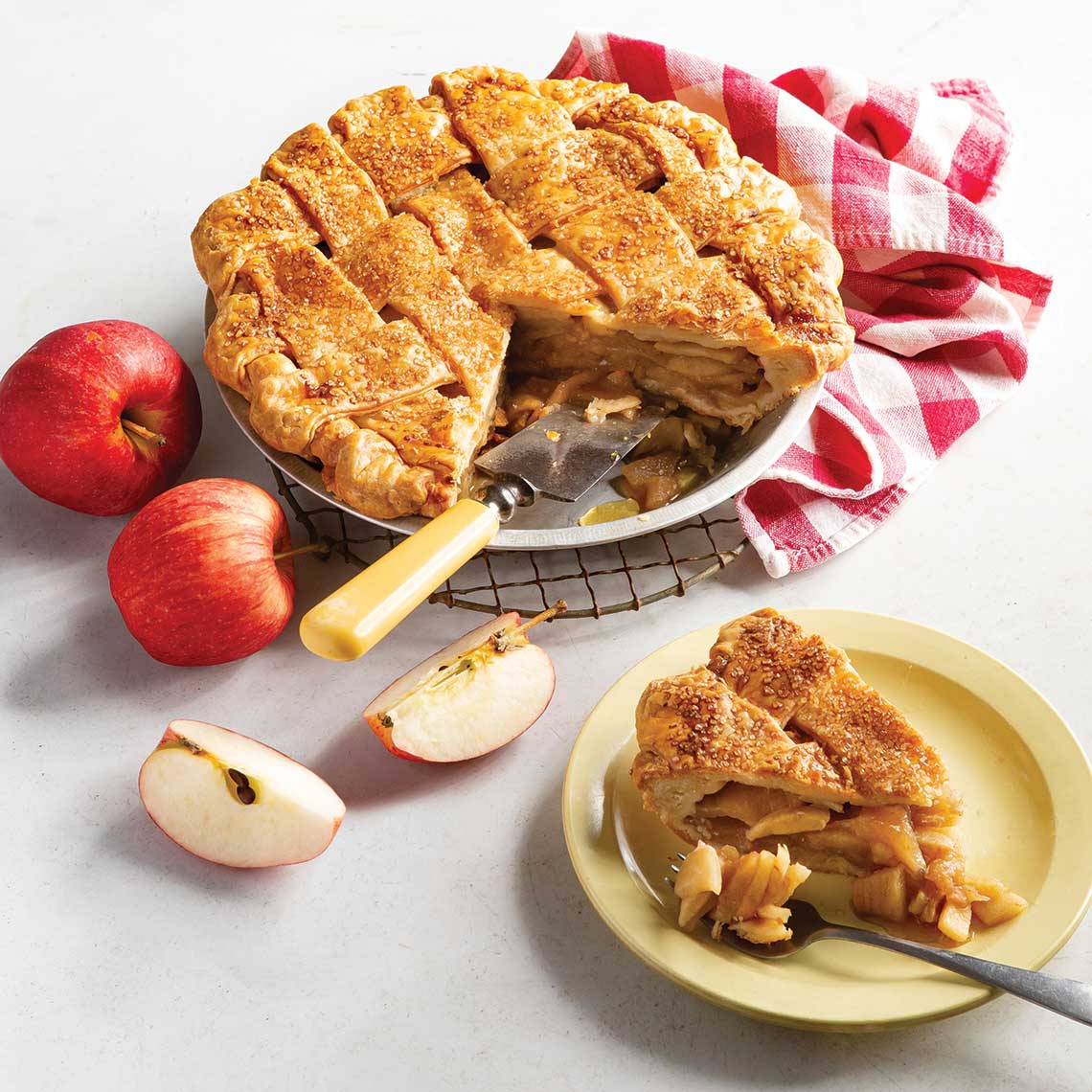 North Carolina is among the top 10 apple-producing states in the country, with more than 300 growers cultivating 14,000 acres. Most of the up to four million bushels produced end up in applesauce and juice, with the rest marketed as fresh apples. Not far from Henderson County, the heart of apple country in North Carolina, Rutherford County’s Pie Safe Baking Company turns fall’s favorite fruit into a classic, all-American pie. In addition to apple, Pie Safe — open since December 2018 in a century-old former bank building that inspired its name — offers pecan, chocolate chess, and much more. 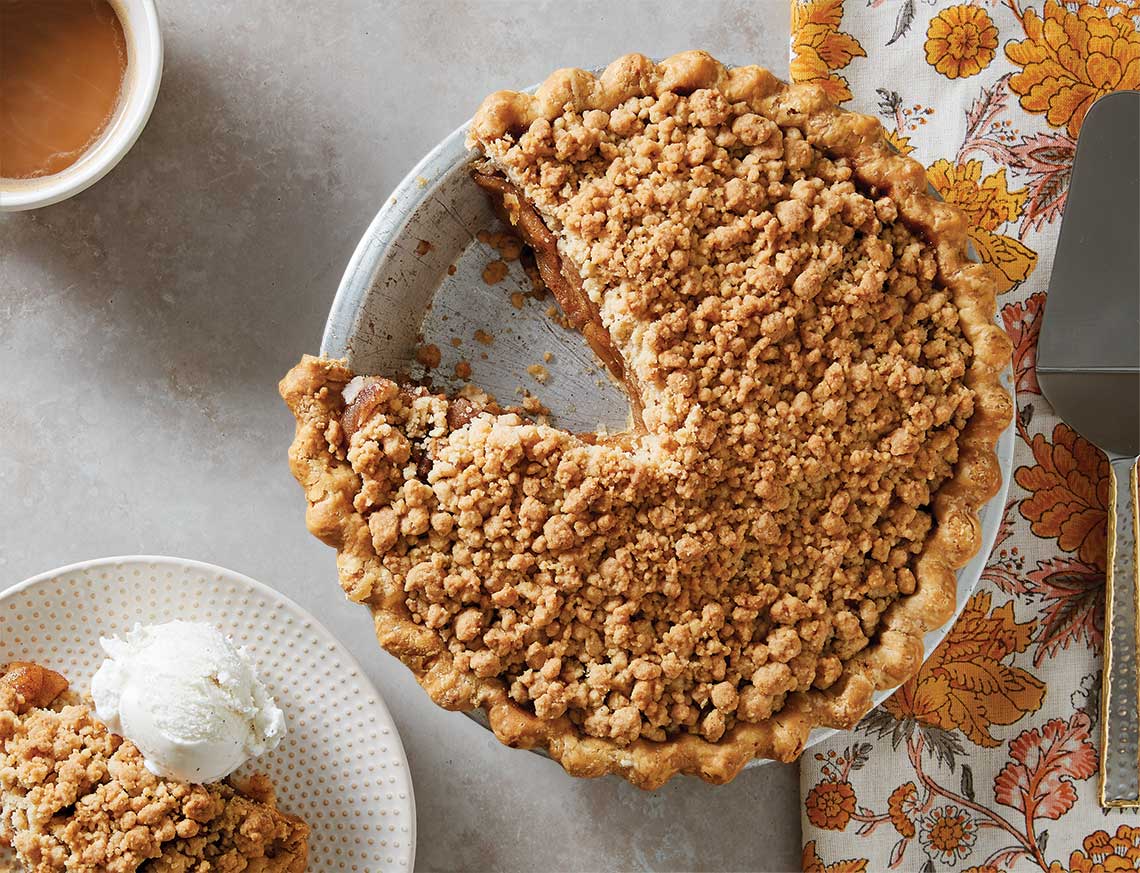 Jessica McClure, co-owner and baker at Acadia Foods in the Washington Park neighborhood of Winston-Salem, credits her great-grandmother with inspiring her baking. “She always made breakfast, lunch, and dinner,” McClure says. “She always had an apple pie, always had a pound cake, always made fresh biscuits, so I always loved that stuff from when I was a kid.” Apple hand pies are on the menu every day at Acadia Foods, which also houses a deli, coffee shop, and neighborhood market. Each fall around Thanksgiving, McClure stocks her bakery case with apple, sweet potato, and pecan pies, plus “harvest pie” — a combination of apples, pears, and cranberries with an oat-nut topping. 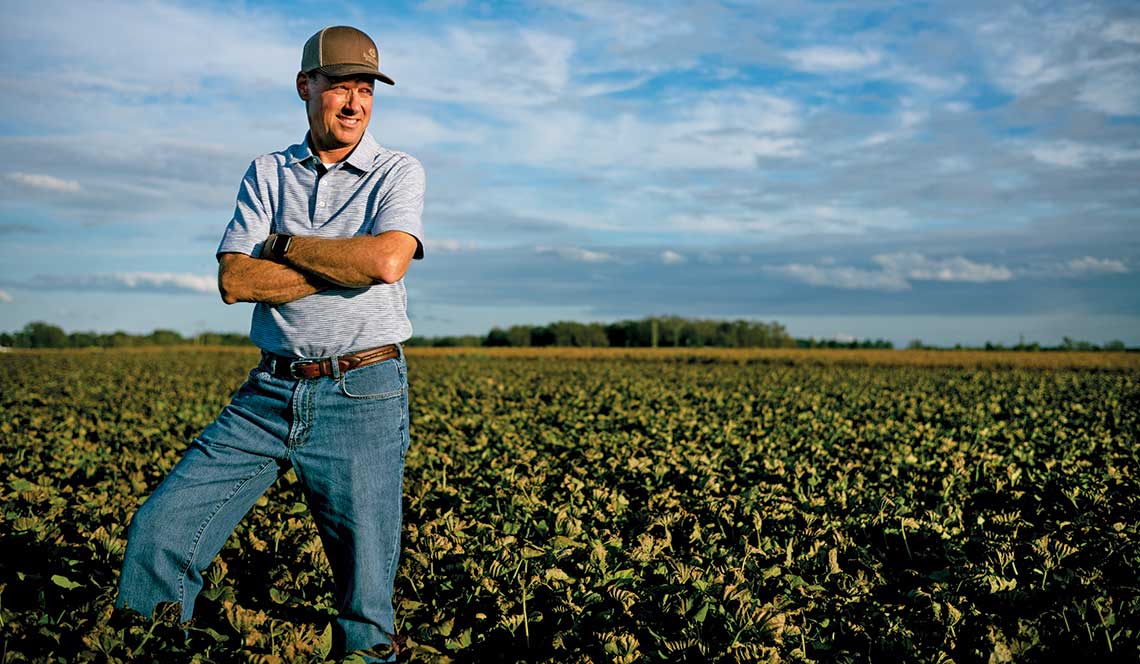 As vice president of Scott Farms, Linwood Scott III oversees the day-to-day operations of the sixth-generation family farm, including the harvesting of more than 4,500 acres of sweet potatoes each fall. photograph by Charles Harris

Only four crops on the North Carolina Department of Agriculture’s produce availability chart stretch across all 12 months of the year: collards, peanuts, herbs, and sweet potatoes. (Or sweetpotatoes, as the NC SweetPotato Commission prefers to call them.) The soil and climate of our Coastal Plain have made us the indisputable champions of the not-yam. According to the commission, our state has ranked No. 1 in sweet potato production for 50 years, cultivating more than half of the nation’s supply. In November, we celebrate the tubers that sustain us year-round — many from family-run operations like Scott Farms in Wilson County — with sweet potato pie. 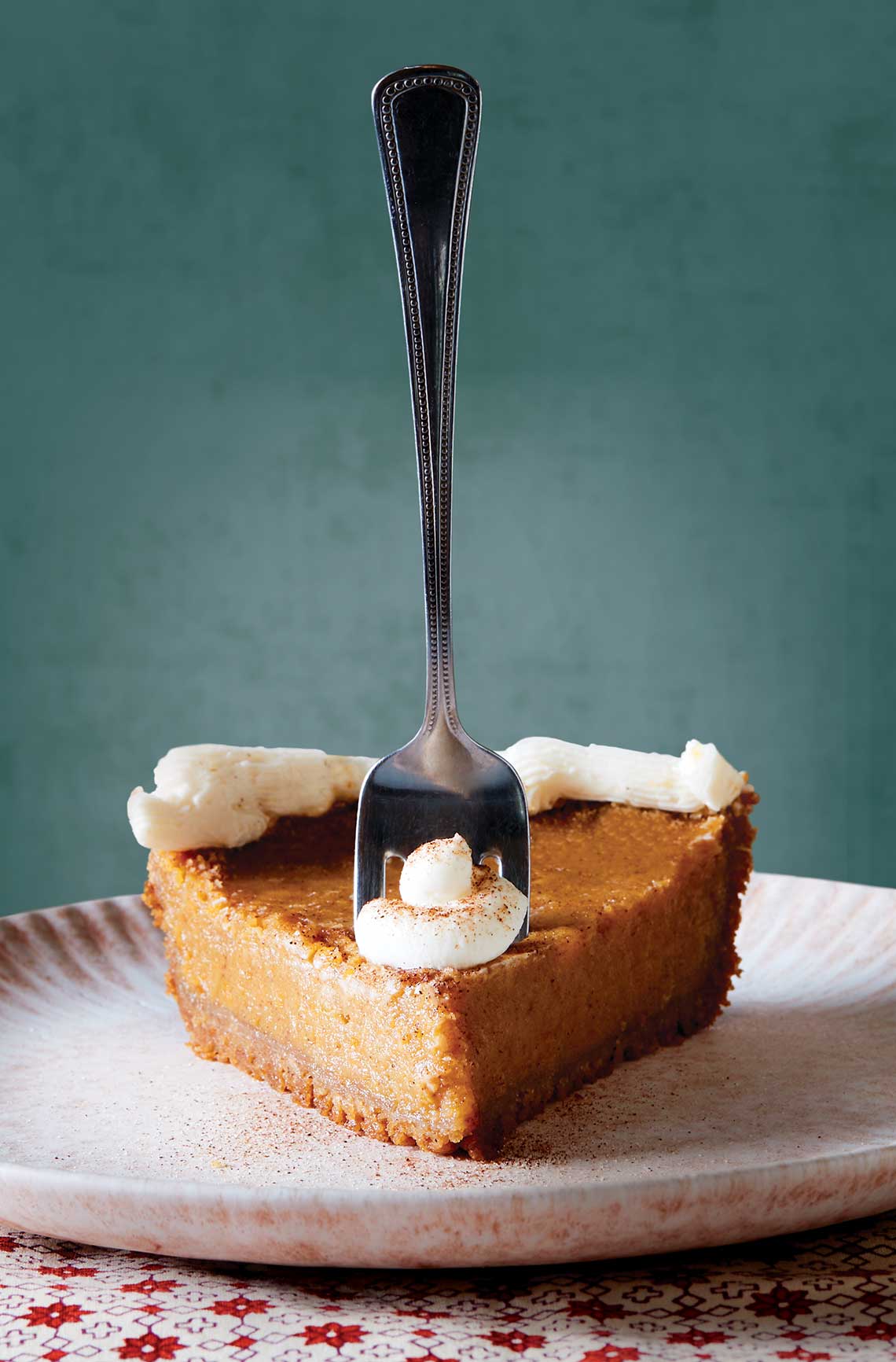 Sweet potato pie has a small outpost within Cake Town. Tracy Albert, Cake Town’s head baker and owner, opened the Wake County bakery with her husband, Jason, in February 2021. Tracy began baking cookies in college, which led to cookie baskets for friends, then cakes and cupcakes while working in early childhood education. Her true passion is cake decorating, but her sweet potato pie — featuring a graham cracker crust — and pecan pie have become customer favorites. 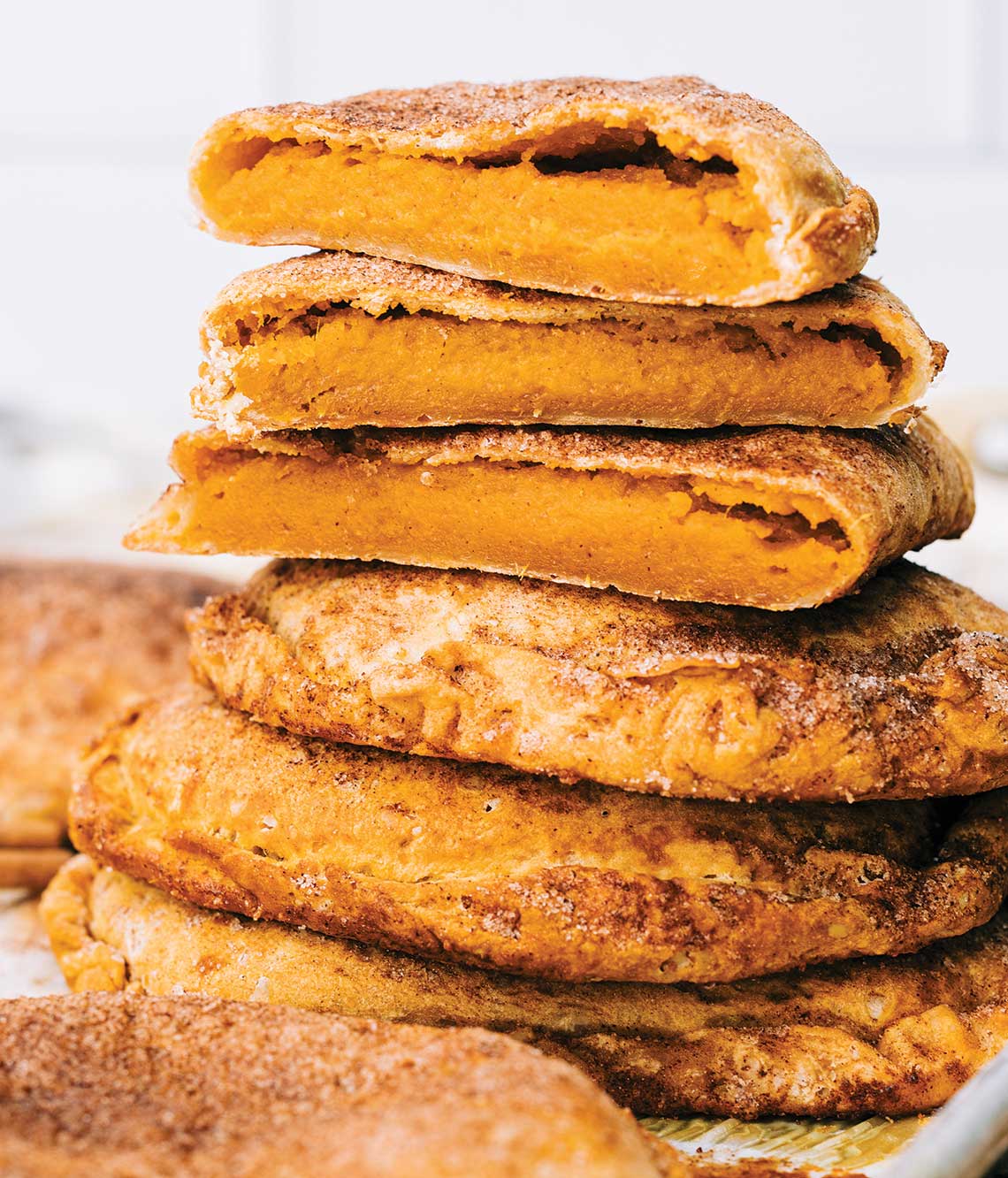 Chef Lorrie Dial, a member of the Lumbee Tribe, makes sweet potato tarts (also called “tater tarts”) at Shugg’s Eats, her bakery in Pembroke. It’s important to Dial to offer a traditional Lumbee dish like sweet potato tarts because she’s committed to preserving her tribe’s food traditions. A sweet potato tart, she explains, is basically a hand pie with a very thin wrapping — “between a biscuit and a crust” — with a light seasoning of cinnamon and a heavy dose of vanilla. Though she trained at Le Cordon Bleu, Dial says that the best sweet potato tarts are still the ones that her mom makes. “Mine pale in comparison to hers,” she says. “I’ve actually had her come in, and probably will during Thanksgiving, to make some and help out, because it’s labor-intensive.” 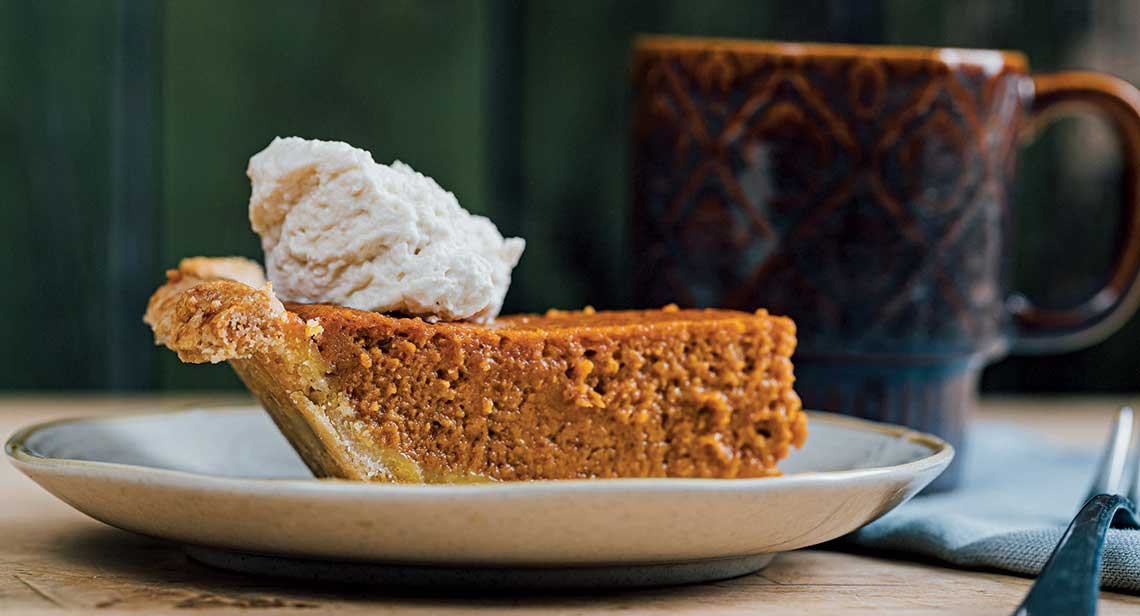 Pumpkin pie is the most popular flavor at Carolina Pie Company. photograph by Rémy Thurston

Steve Lindberg, who owns Carolina Pie Company with his wife, Barb, agrees that there’s just something about pie. “Everyone comes in with a smile; everyone leaves with a smile,” he says. Even with 40 varieties of pie on the menu — including four different kinds of apple pie — pumpkin is the most popular flavor at this Iredell County bakery. In addition to the traditional version, the Lindbergs and their daughter Melanie Barker make a pumpkin cream pie, featuring a gingersnap crust and a brown sugar whipped cream topping. 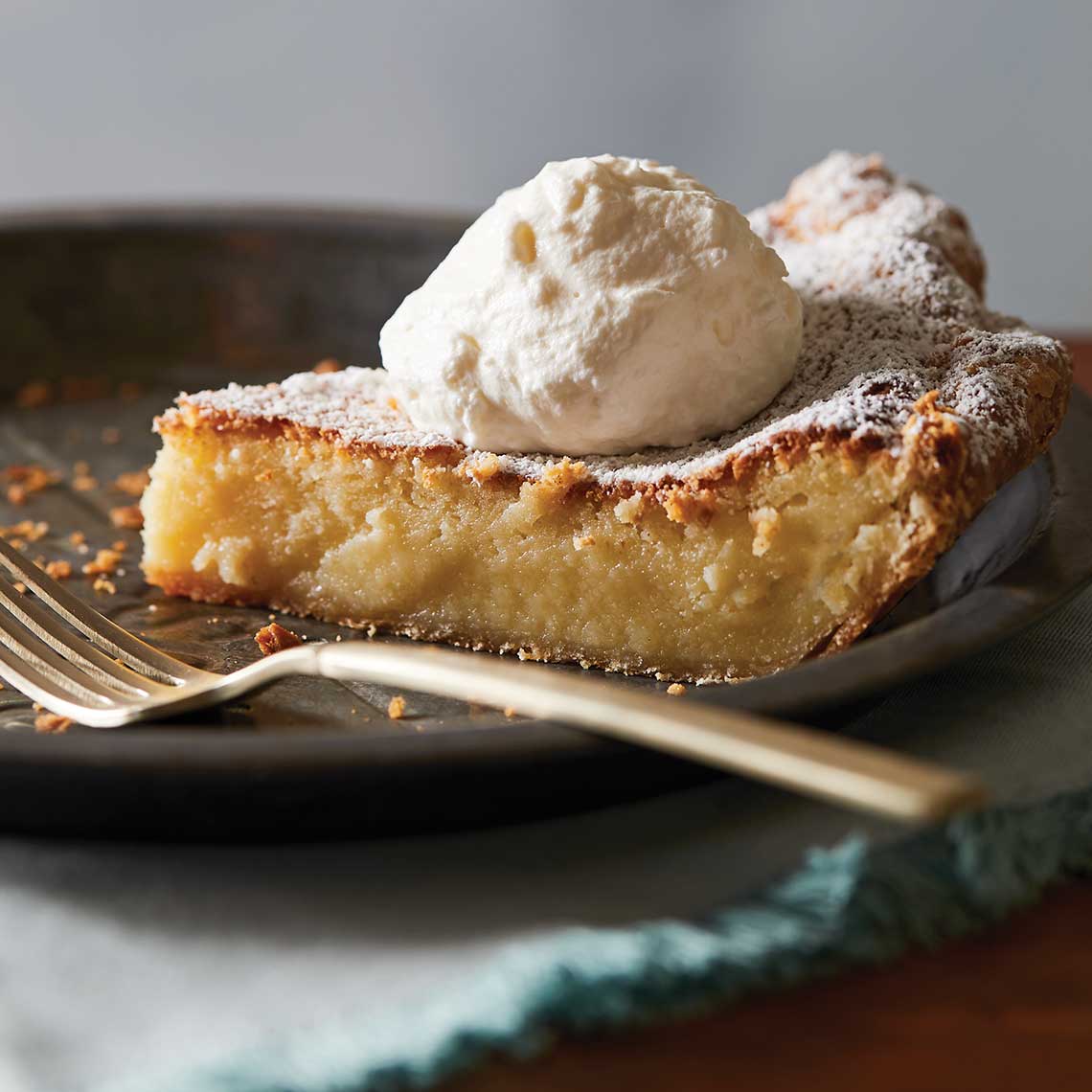 Coffee’s best companion: It took more than a decade for Bean Traders to add pie to its menu, but now, locals know that the coffee shop offers some of the best desserts in town. Among the rotating flavors, vanilla buttermilk is a forever favorite. photograph by Stacey Van Berkel

Open since 2000, Bean Traders Coffee Roasters in Durham started offering pie in late 2015, after co-owner Christy Chapman decided to teach herself how to bake pies she was proud of, and spent a year perfecting an all-butter crust recipe. In 2018, Chapman trained baker Andrea McGeary, who now makes about 50 pies per week — and up to 100 around Thanksgiving — including a fantastic buttermilk pie.

“I do pie for the people,” McGeary says. “Every day, I can come in here, and it will remind me of my Nana,” who was a baker. “It’s just really satisfying.”

For Thanksgiving, Chapman and McGeary plan to offer pumpkin, apple, vanilla buttermilk, pecan, and chocolate truffle pies. Pie is special for many reasons, and sharing is one of them, Chapman says, echoing McGeary’s sentiment: “People buy pie for their people.” 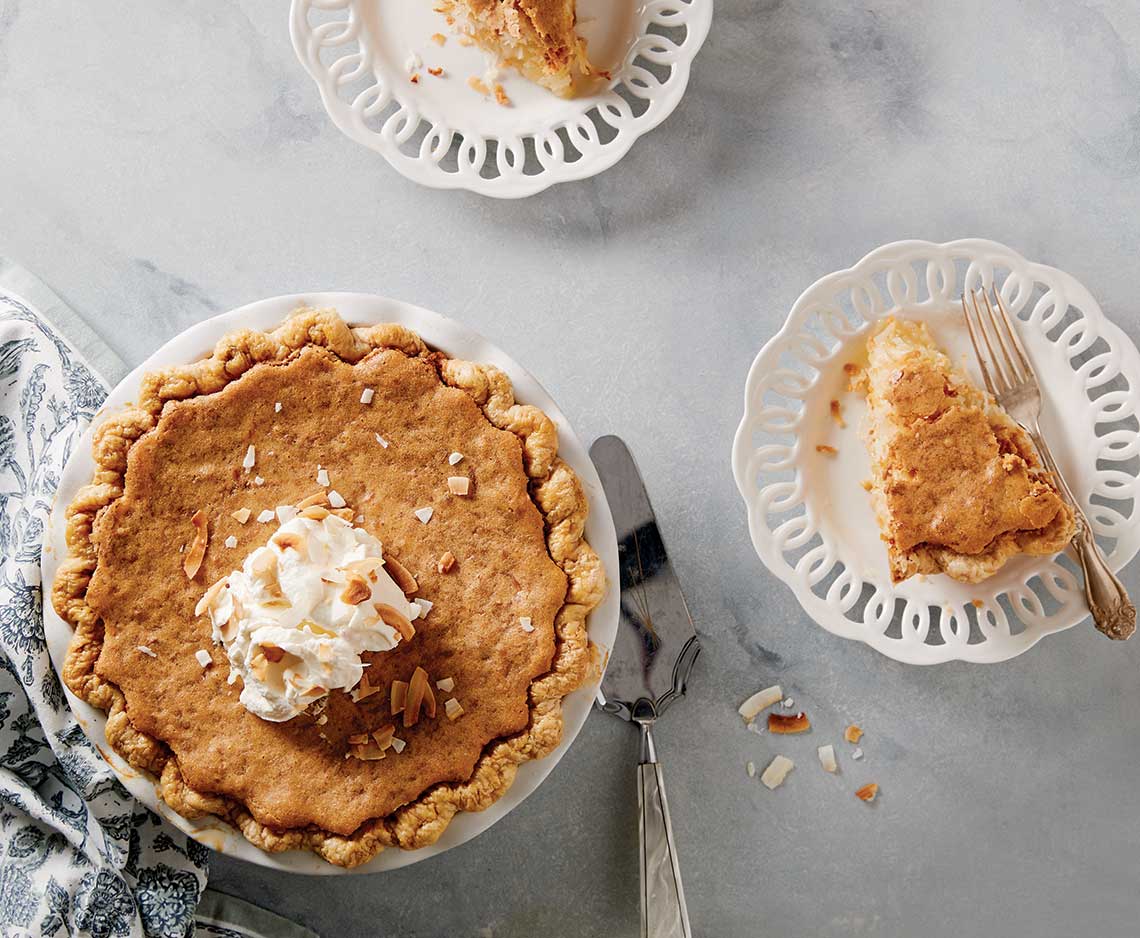 The bakers at Maxie B’s love to work with local ingredients; all of their pies are made with flour from Lindley Mills in Graham. Although the coconut custard pie — a North Carolina tradition — is too fragile to ship, the bakery can send pecan and chocolate chess pies right to your doorstep. photograph by Stacey Van Berkel

For the coconut lovers out there, Maxie B’s in Greensboro offers both a coconut custard pie and a coconut cream pie, along with a brownie-esque chocolate chess pie and several others. Customers from around Guilford County and beyond have long flocked to the bakery for its decadent cakes. In 2017, owner Robin Davis expanded the menu to include pie. As with cake, Davis was motivated by her own cravings for “authentic, Southern, classic recipes.” Maxie B’s customers love pie as much as she does, Davis says, and each recipe has developed a devoted following.