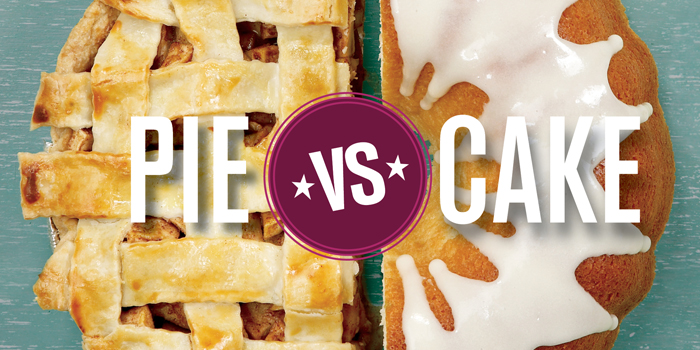 Pecan pie and classic pound cake concluded in dramatic fashion, with a narrow margin of victory. 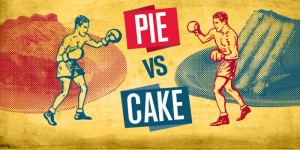 Join us in deciding once and for all whether North Carolina is a pie state or a cake state with the Our State Pie vs. Cake Tournament.

Grab your eggs and butter sticks, it’s time to fight for your favorite dessert.

The championship matchup is set in Our State’s Pie versus Cake competition. Pecan pie and classic pound cake face off this week, and your votes decide which dessert will win.

“With hundreds of years of history behind it, I say pecan pie has trained hard for this event,” says Kathleen Purvis @kathleenpurvis, food editor for The Charlotte Observer. “It’s a humble pie that’s never forgotten its Southern roots.”

Purvis presented a strong case for pie’s superiority in Our State’s February 2014 issue. But hold on, Scott Huler @huler, who defended cake in that same issue, wants the last word.

“I’m predicting a cakewalk for pound cake,” Huler says. “And for pecan pie — I hope it takes a pie in the face.”

Who will win? You decide.

No final four has ever tasted as sweet as Our State’s Pie versus Cake competition.

The winners of those contests will meet in next week’s championship to decide whether North Carolina is a pie state or a cake state.

So far, pecan pie has had an easy road to the final four, but has its luck run out? Apple pie poses a serious challenge this week.

“This is a classic matchup of two legendary pies,” says Brian Dennehy of City Bakery in Asheville @CityBakeryAVL. “Time will tell whose crust holds up better, but I see pecan taking the pie on this one!”

A similar showdown is set for the cake side. Will the buttery, vanilla taste of classic pound cake defeat the rich chocolate layer cake?

“It looks like a battle for the ages,” says Alison Turner of Dewey’s Bakery in Winston-Salem @deweysbakery.

Remember, you decide which desserts will advance to the championship.

Only eight desserts remain in Our State’s Pie versus Cake competition.

In the second round, top-seeded pecan pie continued its domination by easily routing peach pie, 70.4% to 29.6%. It now faces lemon meringue pie, which defeated sweet potato pie in a surprising upset.

In this week’s Elite Eight, your vote matters more than ever. Next week, the field narrows to four — two pies and two cakes. Which desserts will advance? You decide.

In a narrow victory, sweet potato pie (50.5%) defeated pumpkin pie (49.5%). Our thanks to pumpkin for playing, but since North Carolina is the leading producer of sweet potatoes, this is a big win for a home team.

The eight match-ups in the second round (February 7-February 13) include chocolate layer cake challenging carrot cake and the mighty pecan pie taking aim at peach pie.

“I have no doubt that pecan pie will rise to the occasion: Pecans always come through in a crunch. In fact, I’ll make an early prediction that the final victor will be pecan,” says Kathleen Purvis, food editor for The Charlotte Observer @kathleenpurvis.

“I’m delighted to see that apple pie beat the crust off cherry pie. There’s nothing better than a slice of warm apple pie topped with a dollop of melting vanilla ice cream. I’ve never understood anyone’s preference for cherry pie. Fresh cherries are delightful; cooked cherries are far from it,” says Andrea Weigl, food writer for The News & Observer @andreaweigl.

Who will win it all? Jeffrey Turner, an Our State assistant editor and resident food writer, hopes to see an underdog go all the way.

“I’m campaigning for chocolate chess pie. If it faces red velvet cake in the finals, I predict that anyone who’s ever been forced to eat red velvet at Christmas will eagerly vote for a chocolate pie,” Turner says @Jeffrey_T_

In the end, it’s your decision. So, is North Carolina a pie state or a cake state? You decide.

UPDATE: One of our favorite college basketball coaches weighed in on the debate. Coach Joanne P. McCallie from Duke offers her predictions for the tournament. 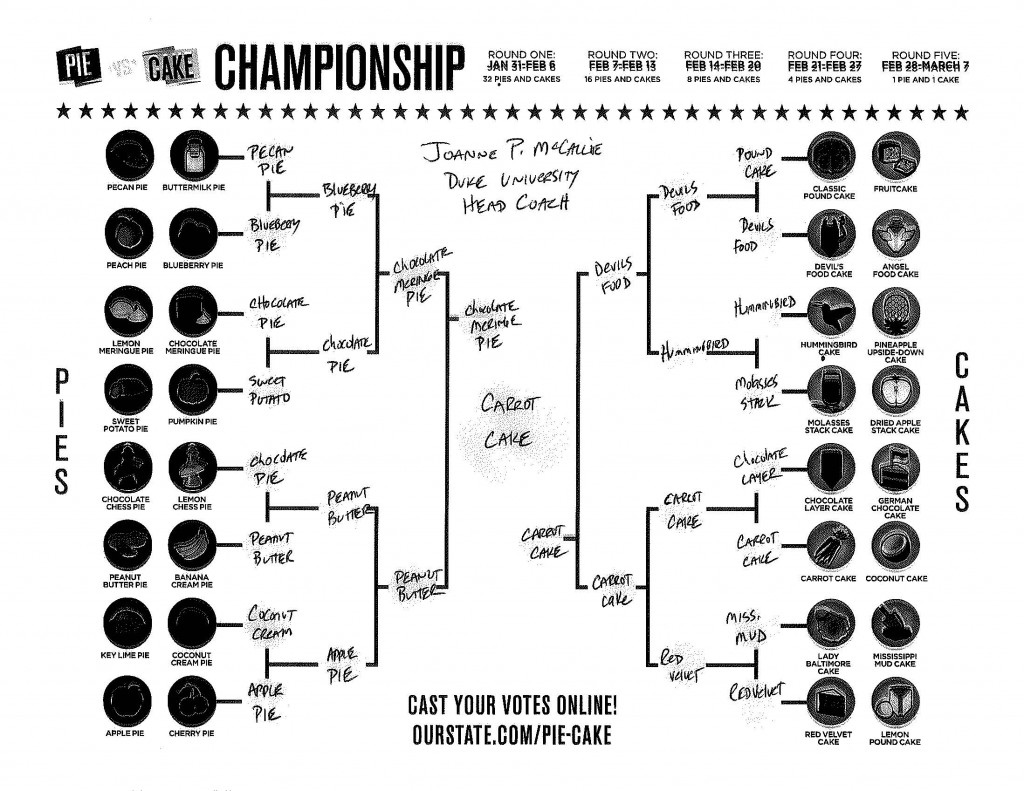 Our field of 32 desserts — 16 cakes; 16 pies — features plenty of perennial flavors, like Apple Pie and Devils Food Cake, as well as Southern favorites, including Sweet Potato Pie and Peach Pie, and Lady Baltimore Cake and Hummingbird Cake, competing to determine once and for all whether North Carolina is a pie state or a cake state.

Each week, fans of #teamcake and #teampie can vote online for their favorite cakes and pies. Winners of each round will be announced on Fridays through February, and the champion dessert will be crowned March 7.

The 16 match-ups in the opening round (January 31-February 6) include the top seeds — Pecan Pie and Classic Pound Cake — going up against lightly regarded Buttermilk Pie and Fruitcake, respectively. If both top seeds go all the way to the finals, look for a sweet victory for Classic Pound Cake, says baker Amy Tournquist of Hummingbird Bakery in Durham @BakeHummingbird.

“If we’re talking random versions of each, then the pecan pie will win every time. BUT, if we are talking the super stellar versions, like best you ever had, of each then I must say that the ethereal perfect pound cake — light, rich, slight crunch — wins against even the very best pecan pie.” Tournquist says.

The first round also has several match-ups of similar, but different, desserts: Lemon Meringue Pie vs. Chocolate Meringue Pie and Chocolate Chess Pie vs. Lemon Chess Pie. It’s really not a contest, though, according to Phoebe Lawless of Scratch Bakery in Durham @scratchbake.

It appears there will be a lot of close contests in this first round, but the biggest early toss-up may be in the fruit-pie side of the bracket: Apple Pie vs. Cherry Pie.

“It’s going to be a battle of epic portions, expect apple to deliver the victory,” says Brian Dennehy, general manager of City Bakery in Asheville @citybakeryavl

When all is said and done, who will win it all? Bakers are divided, but all are going with one classic or another — including one colorful contender:

“With its rich flavor and moist texture, red velvet cake is going to win it all!” says Alison Turner, executive pastry chef at Dewey’s Bakery in Winston-Salem @deweysbakery.

So, is North Carolina a pie state or a cake state? You decide.

Join us in deciding once and for all whether North Carolina is a pie state or a cake state with the Our State Pie vs. Cake Tournament.

Beginning on January 31, you can vote once a day for your favorite pies and cakes in head-to-head matchups, campaign for the dessert you love Facebook and Twitter, and rally your friends to back the pie or cake of your choice. Each week, winners will advance and the bracket will get smaller.