The sun throws animated shadows — the lacy silhouettes of hanging Boston ferns — across the table circled by Betty Roberts and her friends. Framed by columns on a breezy veranda, the women have gathered for lunch at Saint Jacques at The Burke Manor Inn & Pavilion, an island of French hospitality tucked behind hedgerows and magnolias near the railroad tracks that zipper up Main Street in Gibsonville on the eastern edge of Guilford County. 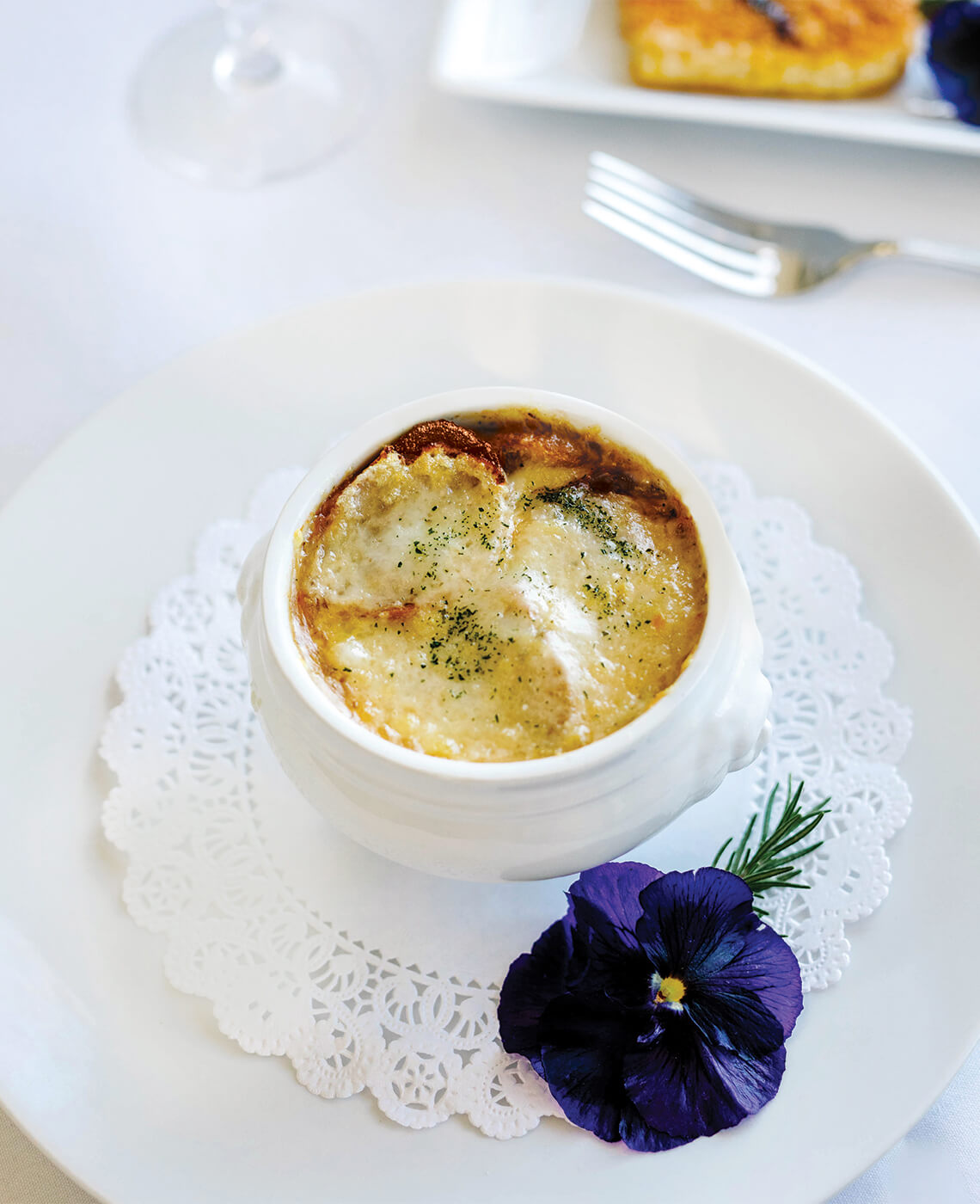 Soupe a l’oignon gratinée — you might know it as French onion soup — topped with Gruyère and Asiago cheeses. photograph by Anagram Photo

The friends clink glasses, sip Chardonnay, and luxuriate in the setting: a broad-faced Neoclassical Revival home that was built by textile baron Ceasar Cone in 1906 and transformed, more than 100 years later, by current owners Lilian “Lil” and Lori Lacassagne.

Lori runs the front of the house, including the nine-room inn, while Lil commands the kitchen of Saint Jacques, which has earned four out of a possible five diamonds — more than any other Triad restaurant — from AAA.

“Everything is subtle,” says Lil, whose crisp white chef ’s jacket bears his name and title stitched in purple cursive, an homage to the lavender that grows around his hometown of Grasse, the world’s perfume capital, in southern France. “It’s the birthplace of scent and aroma. That’s why I am where I am,” he says. 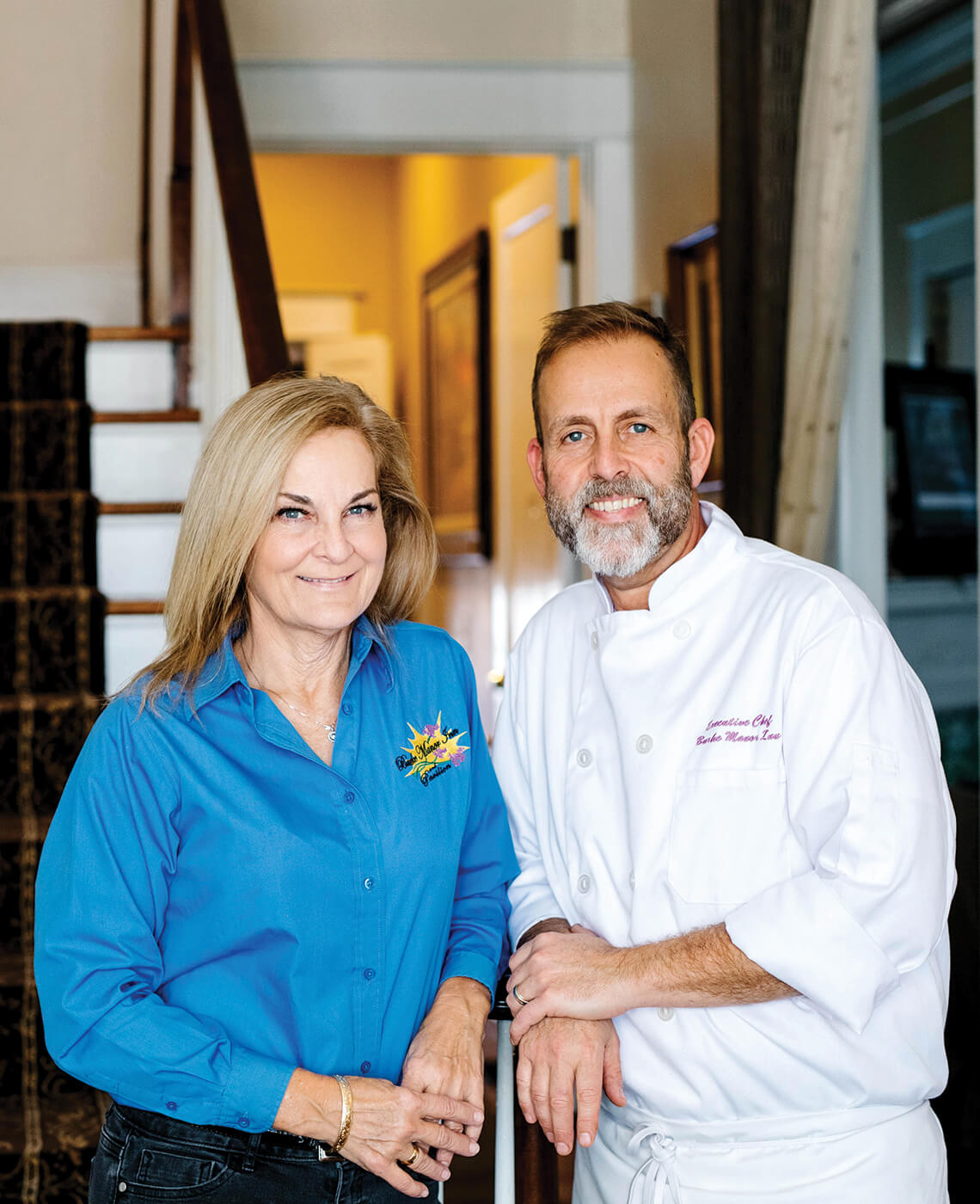 Lil, who trained in a French restaurant with three Michelin stars, applies his olfactory skills to even the smallest dishes at Saint Jacques. Today’s soup of the day, for example, is corn chowder. To make it, he and his team, including sous chef Susan Horkay, peel and boil potatoes, puree them with homemade vegetable stock, and spice the smooth base with cumin, cinnamon, salt, pepper, and nutmeg. Next, they pan-roast corn with shallots and garlic, pulse half the mixture in a blender, recombine it with the rest of the corn, fold in the potato puree by hand, and finish the creation with a kiss of brown sugar.

“You have to understand the power of each ingredient,” says Lil, who sharpens his senses by skipping lunch before he composes a menu. In addition to regular menus, he conjures lineups for special dinners, receptions, and cooking classes, which are held — depending on the crowd size — inside the inn, under a tented pavilion behind the house, or on the nearly three-and-a-half-acre grounds.

He and Lori also lead annual trips to France, guiding travelers through historic sites and some of the world’s finest restaurants. “I take all of the hardship,” Lil says, “and let them enjoy the good and the right things.”

The couple brings that ethos — anchored in what they call a “servant’s soul” — to Burke Manor, which they bought in 2011. Soon after, they added an in-house French restaurant, a sister to their acclaimed Saint Jacques French Cuisine in Raleigh. They sold the Raleigh restaurant in 2015 and later moved to Gibsonville to become innkeepers-in-residence.

The bedrock of Lil’s staff is respect: “I don’t hire anyone who is not kind. The technique comes later.”

Well-schooled in the hospitality business — Lori is a native of Las Vegas and a veteran of the cruise-ship industry — they attend to their small-town enterprise with gusto. Lil tutors his employees on the fine points of fine dining, such as how to serve with their right hands around diners’ right sides — “You don’t want your elbow to be too close to them” — and how to put silverware in the center of the plates before clearing them so crumbs don’t fall from the knives to the table.

The bedrock of a good staff, Lil says, is respect for the diners: “I don’t hire anyone who is not kind. The technique comes later.” 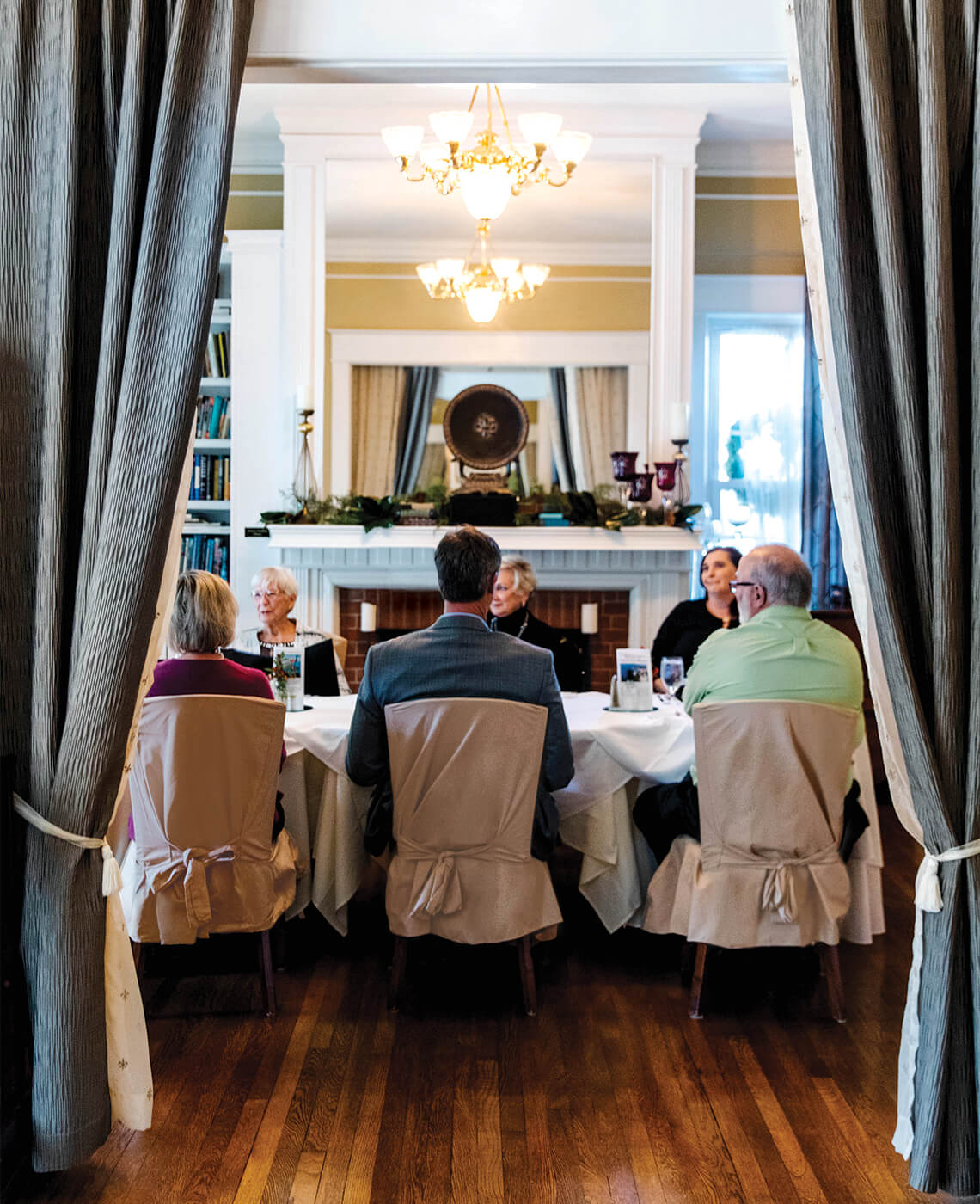 The stately dining room at Saint Jacques sets the scene for a memorable meal. photograph by Anagram Photo

Guests are allowed to linger. The restaurant rarely turns over its nine tables — 14 if you count seating on the veranda, where Betty Roberts surveys the menu with her friends Glynis Wilkes, Mimi Alef, and Carole Barnard, all neighbors at Burlington’s Twin Lakes retirement community.

The women have dressed for the brisk day, each in a turtleneck and wrap, each with a coordinating mask to prevent the spread of Covid-19. For almost a year, they’ve have socialized alfresco in cul-de-sacs and parks, noshing on the contents of brown-bag lunches and clamshell take-out boxes.

This time, they went for an upgrade.

“This is a treat,” Betty says. “Coming here feels like stepping back in time. But it’s a good step back.”

The women mull over a few of the lunchtime choices: warm goat cheese salad; chicken crepe with mushrooms and Mornay cream sauce; herb-crusted flounder on a bed of pesto and shrimp risotto. But in the end, they all order the same thing: the salad topped with a pan-seared fillet of Scottish salmon and a cup of the corn chowder.

That makes it easy on server Sarah Cooper, who is vested and aproned in the classic French mode. She slips through a front door framed by fluttering red, white, and blue French and American flags. 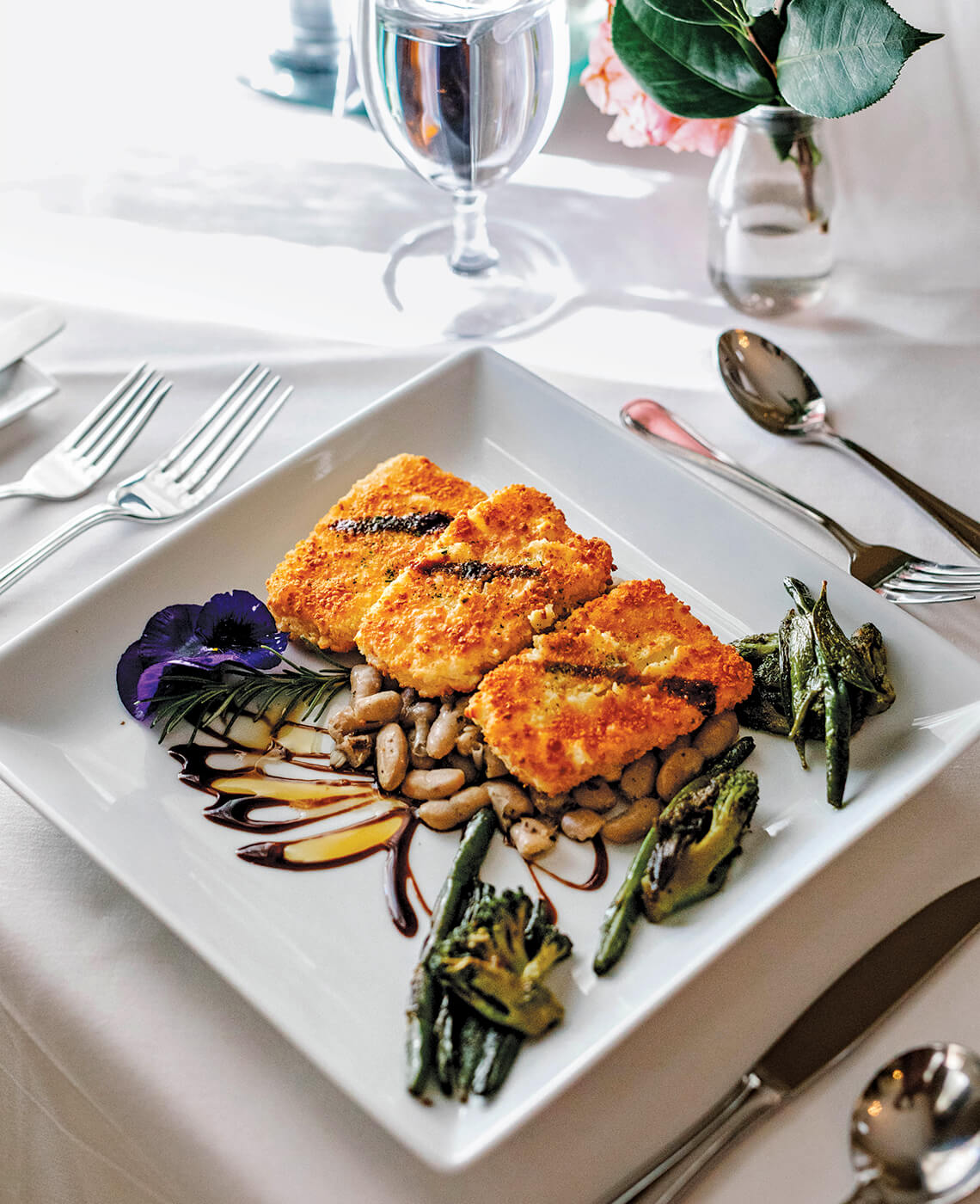 Chilean sea bass medallions, served with spicy chard and a ragout of garlic, herbs, and beans. photograph by Anagram Photo

The food arrives with a flourish. Betty and her friends admire how the purple pansies on their plates complement the orange slabs of salmon; how the mixed salad greens show off the breaded goat cheese medallions, the poached pear slices, the candied pecans, and the red grapes; how the corn chowder is accompanied by a rosebud and a snip of rosemary on the side.

Carole holds on to her blushing bud — she’s taking it home.

“There’s another world out there, a troubled place,” Betty says, nodding toward the reality beyond the magnolias.

Mimi agrees: “We’re protected by the beauty of this place.”

If you use the Open Table app to make a reservation at the Lacassagnes’ restaurant, look for Saint Jacques at The Burke Manor Inn, which is not to be confused with Saint Jacques French Cuisine in Raleigh.