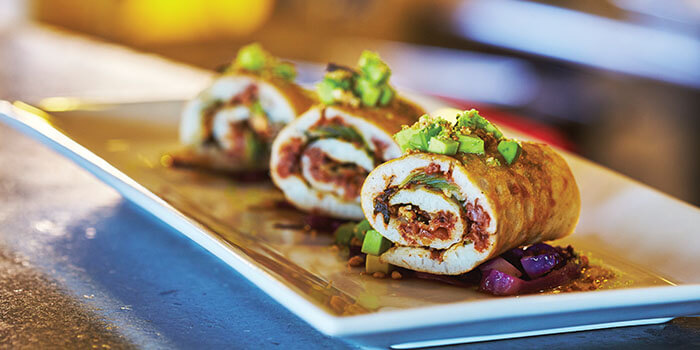 Pity the portobello. Leathery, limp, and bland, it’s long been a mainstay of vegetarian cooking. At the vegan restaurant Plant in Asheville, chef and co-owner Jason Sellers has been on a mission to reclaim the maligned mushroom. He smokes the portobello over applewood, finishes it in the oven, and marinates it with cider vinegar and herbs. It’s grilled to order, and when served with V1 sauce — a vegan version of A1 — it provides a surprising depth of flavor.

“We can see everyone in the dining room, so we get instantaneous feedback,” Sellers says. “We can see when people are doing the ‘yes nod.’ They’re completely blown away that something could taste like that, with no animal products. We get to watch them be happy.”

It’s perfectly fine to be skeptical. After all, this is North Carolina, and it takes audacity to open a vegetarian restaurant here in the Barbecue Belt. And even more to open a vegan restaurant that uses no animal products and envisions itself a culinary destination. This is where Plant is tastefully challenging the conventional wisdom about a style of cooking that’s long overdue for a makeover. 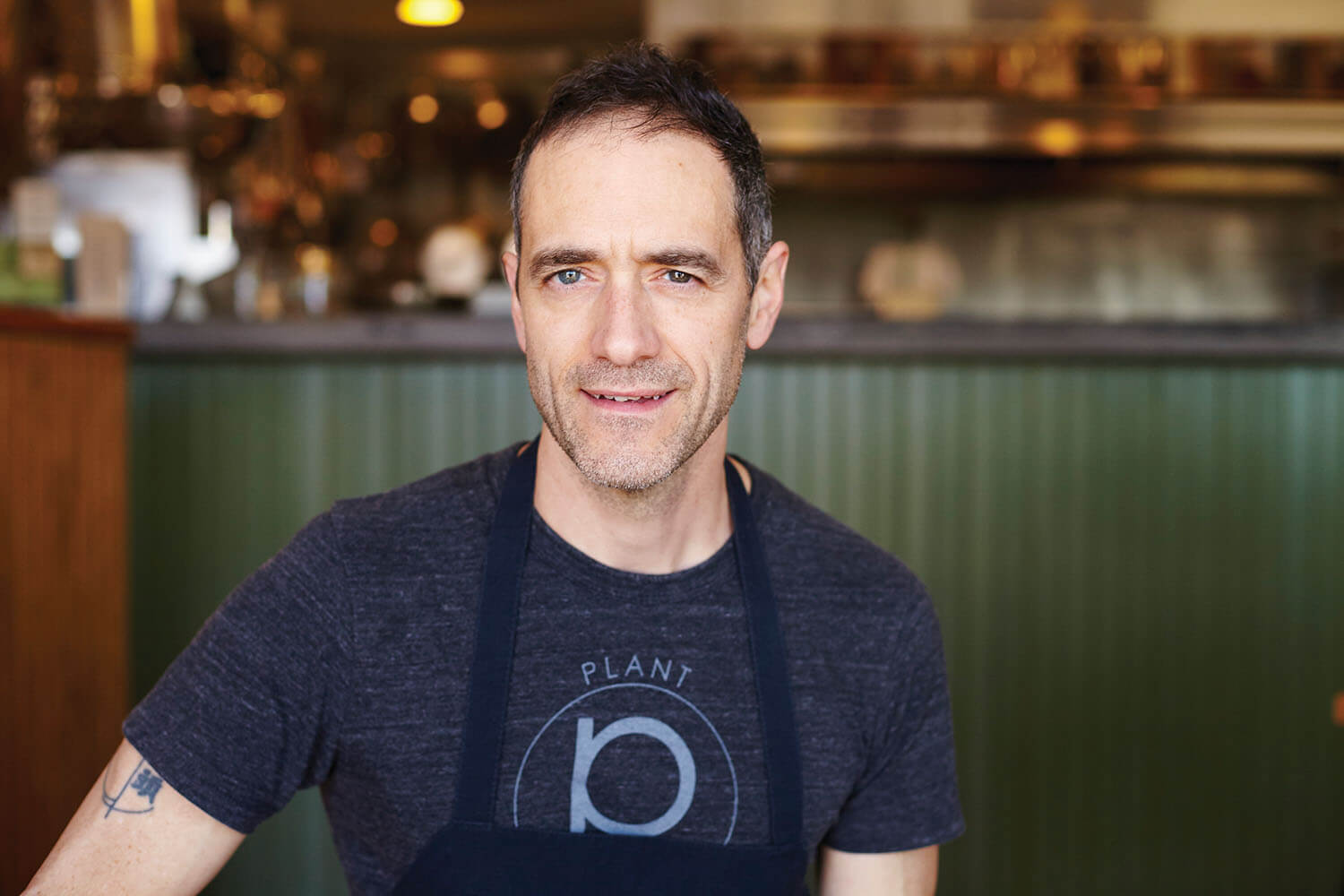 Gone are the dull vegetarian dishes of the past. Plant, which proclaims itself a “restaurant with roots,” boasts bold flavors and textures, and it combines them in surprising and smart new ways. There’s an element of serendipity, too. “People go out to be entertained, and for something memorable that you couldn’t do at home in 15 minutes,” Sellers says.

In one sense, it started with ice cream. Sellers had trained in New York City and was working at Asheville’s Laughing Seed Café a few years back when he gave a sample of an icy, coconut-milk concoction to customer Leslie Armstrong. She’d been contemplating starting a business venture. A confessed frozen dessert “freak,” she jokes that it was Sellers’s ice cream that persuaded her to collaborate with him. Soon they were talking about opening a fine-dining restaurant based on an imaginative menu and their vegan ethical principles.

Armstrong had worked for years as a social justice activist. Her husband, Alan Berger, had been an accountant with experience in nonprofit management. It took a while for the three to refine their vision, ruling out a food truck, a coffee shop, a wholesale business. “We had a lot of verve going into it, and were doing it for the right reasons,” Sellers recalls. “It wasn’t just three people who hadn’t worked in the restaurant business before.” He pauses and adds, “It was two people who had never worked in it before. But given our collective energy, we knew it would be a success.”

Admittedly, if any locale in the state would welcome the high-concept restaurant, it would be the city known for its quirky vibe and established vegetarian-dining scene. Says Berger, “We were looking for a New York-intimate style with the relaxed and comfortable feel of Asheville.” On Merrimon Avenue, they found a spot with a cozy dining room, a small patio, and an open kitchen. All three put in countless hours on every task imaginable — Armstrong even painted the artwork for the walls — and Plant opened in 2011.

It’s not just portobellos that have gotten the makeover treatment at Plant: Recently, Sellers grilled up some beets. He thought the dish lacked warmth, so he embellished it with horseradish mayonnaise. He calls such refinements “missing links,” and explains, “We ask ourselves, ‘How do we do this so it’s a delight to look at and to eat?’ There’s just one way to do food, and that’s the best way to do it. In that sense it doesn’t matter that it’s vegan.”

Plant always offers a “live,” or raw-food, dish on the menu, like the squash strata — layered, lasagna-style, with marinated vegetables and macadamia nut cheese. These dishes often end up being some of the more inventive presentations. Staffers are brand envoys, well-versed in the art of gently guiding customers through a menu that may contain unfamiliar items. One diner looked at it and remarked, “I recognize potato chips, but that’s it.” 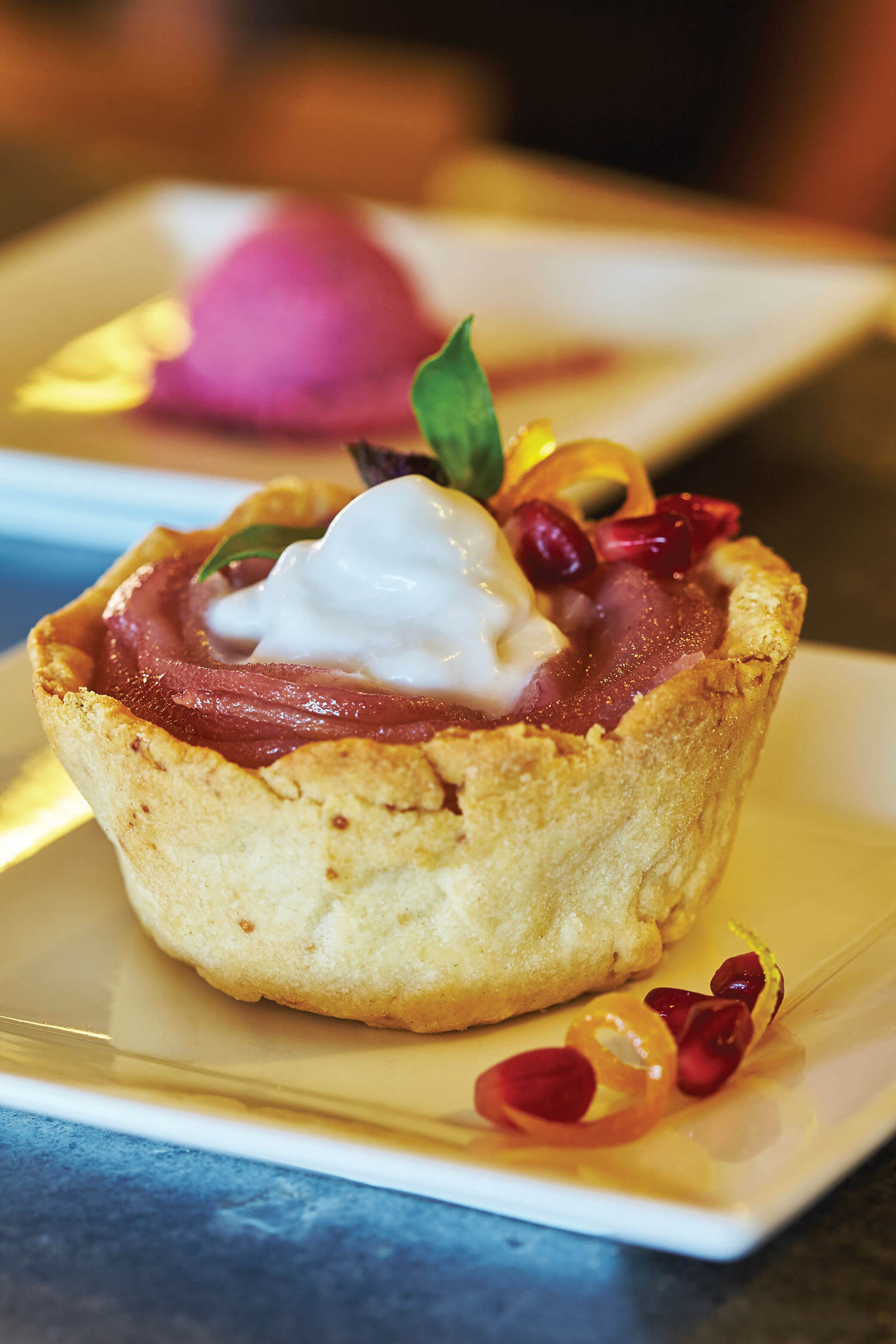 Armstrong emphasizes, “Eating a plant-based diet is not about deprivation or removing things from one’s plate. It’s about adding many things to one’s plate and one’s life — joy; peacefulness; abundant health; and new, flavorful, delicious food.”

Nevertheless, connoisseurs of cheese may take some convincing before they believe that Plant’s offerings are as complex and delectable as those that come from milk. Made with cashews, macadamias, or other nuts, some are aged in brine to deepen their flavors, while others are fresh and spreadable. The variety of colors, tastes, and textures on the plate is remarkable.

Plant’s bar area is small, but it packs a punch with plenty of local beers, a curated selection of sustainable, organic wines, and a tidy list of craft cocktails. A Manhattan arrives not with a cherry, but with a maraschino fig. A classic margarita has been reinvented as the Esmerita, with notes of cranberry and jalapeño. Sous chef Nathan Burrows helps name the cocktails, which is how a staid White Russian morphed into the modern and edgy Alaska Shiv, which contains organic coffee.

The season will soon be bringing forth all sorts of “ephemerals,” those tender shoots, flowers, and berries available for just a few short weeks, in what Sellers calls “a wild prelude to spring.” He recognizes this culinary good fortune is due to the region’s diverse ecosystem, and that in turn allows staff at Plant to make over their entire menu every two or three days. The feedback is heartening. “When I go somewhere and people say, ‘I’ve heard nothing but good things about your restaurant,’ it just stops me in my tracks,” Sellers says. “It’s so rewarding that they appreciate what we’re doing.”

And that brings the story back to ice cream. In 2012, some visitors went a little nuts for the frozen dessert they enjoyed after their meal. It turned out they were members of the Amy’s Kitchen food-products family, which led to a licensing agreement and nationwide production. That means anyone can now enjoy four flavors of Plant’s vegan genius in hundreds of grocery stores across the U.S. It’s a delicious irony, enough to melt even the coldest skeptic’s heart.

Amy Rogers is an award-winning writer based in Charlotte, and a frequent commentator on NPR station WFAE.