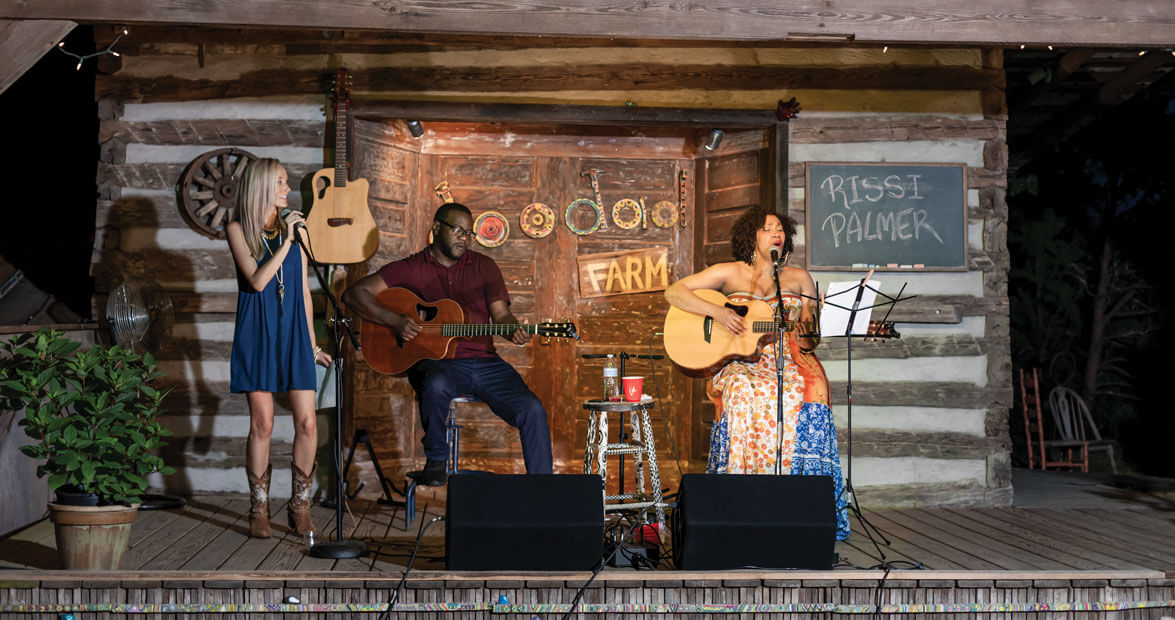 Rissi Palmer sits in the shade of an old tobacco barn on a hot afternoon, strumming an acoustic guitar and singing a song made famous by Aretha Franklin. A crowd of about 60 people, in camping chairs of various colors, sings along to the chorus: You make me feel like a natural woman. A four-legged guest named Newman joins Palmer onstage, his golden eyes surveying the audience before he wanders off again. Just another day at Doodad Farm. But this is not your typical farm — nor your typical music venue. For one thing, the stage that Palmer performs on is built straight onto the side of the barn. For another, it’s on a sprawling 60 acres just 10 minutes from downtown Greensboro, although it feels like its own remote little world.

To get there, you take a couple of winding roads to a handmade sign with the word “Doodad” spelled out in found objects, including spoked wheels and tool handles. Beyond that, a dusty driveway curves beneath leafy hardwoods past a goat barn and a two-story house. Behind the house, under a canopy of oak, hickory, and poplar trees, is an open area at the edge of dense woods. At the far end is the barn — a 140-year-old tobacco barn that now hosts music. For veteran singer, songwriter, and producer Don Dixon, who’s performed on Doodad’s barn stage several times, the setting raises some existential questions: “What kind of music went on when that tobacco barn was first built? Whose banjo was sitting around? Who had a fiddle in that family?” 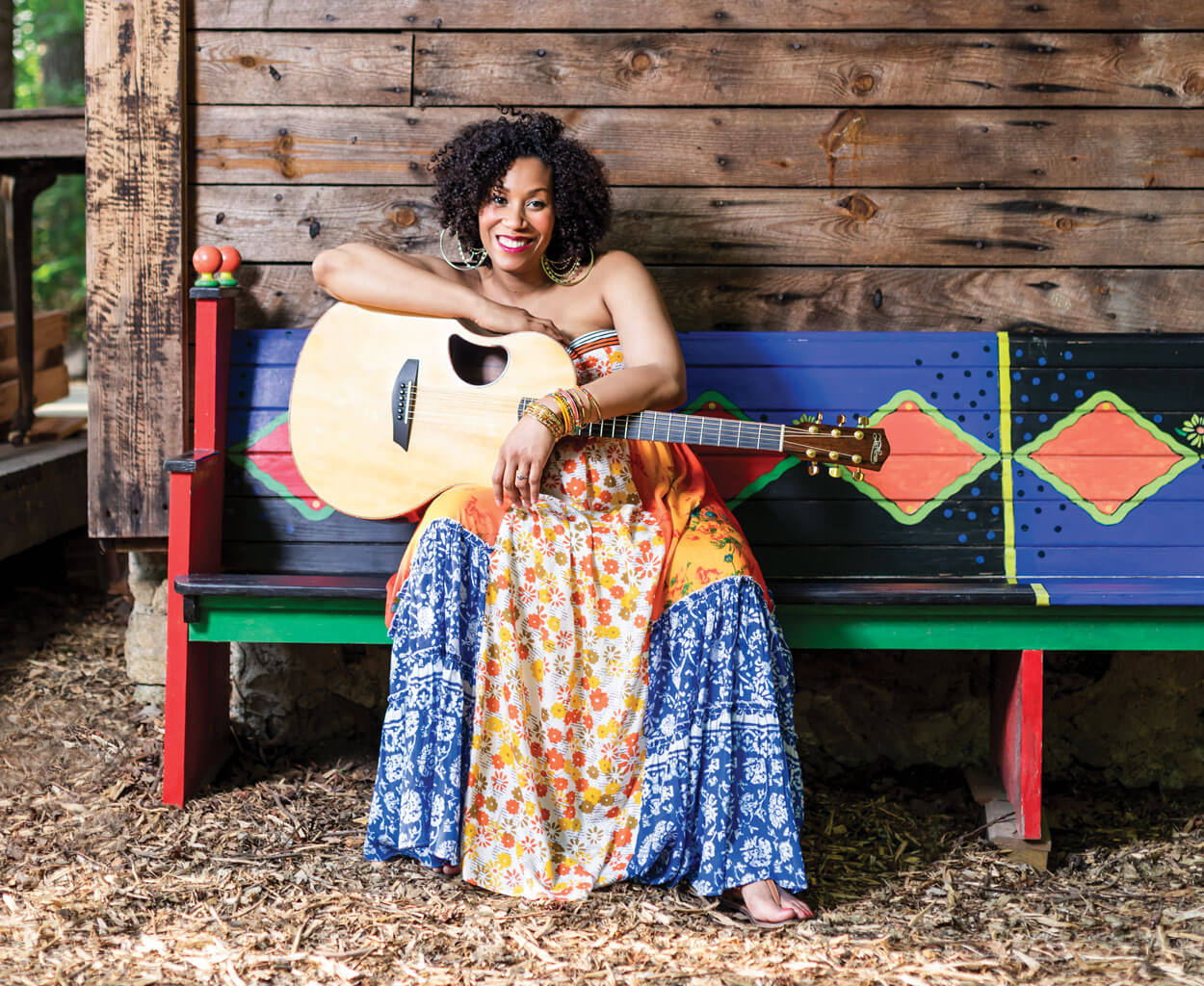 Palmer’s “Country Girl” was the first song by a black woman to reach Billboard’s country chart in 20 years. (Ten days after this Doodad show, Palmer gave birth to her second daughter.) photograph by Eric Waters

Dixon and Palmer are just two of a long list of repeat regional performers at Doodad Farm, an informal venue that opened in 2011 when one of its owners got an unusual birthday present. Dean Driver had long talked about turning the barn on his family’s property into a performance space. So for his 50th birthday, his wife, Laurel, and their two children, Riley and Ellis, rounded up a crew to clear away the vegetation, begin restoration of the barn, and start building the stage. Eight years later, most of those volunteers — now affectionately known as Doodad’s Beat Farmers — continue to help out on the farm. “We think it’s really worthwhile to put our effort into creating community and creating these moments for people, connecting to music,” says Riley, 30, who teaches English as a second language when she isn’t working on her parents’ music farm.

Laurel grew up on this farm, and remembers waking up before dawn to milk cows before heading off to school. Her parents, Audrey and Buck McCollum, had moved here in 1959 from a farm in Rockingham County. Laurel still remembers the mooing cows, the clucking chickens, the squealing pigs, and the sweet, musky scent of the golden tobacco leaves that her dad cured in the farm’s two tobacco barns. The livestock and crops provided food and income to supplement her dad’s primary job, servicing heating and air-conditioning units. One time, when he was away in Nebraska on a three-month work assignment, Laurel’s mom was left alone with four kids and a tobacco harvest to bring in. “That barn required wood fire,” Laurel remembers, “and my mom put in gas heat while Dad was gone so she didn’t have to stay up all night tending the fire.”

“It feels good when people start rolling in for a show, all those smiles.”

Years later, Laurel moved back to the farm with Dean to take care of her mom, who by then was in failing health. Audrey died in 2018. Dean says that part of the incentive for having music at Doodad — so named because he hopes it’s what his potential grandchildren will call him one day — was to share the land that they’ve been given. “We’re not farming it anymore, like Laurel’s family did,” he says. “We enjoy giving it to the community.” Their hard work pays off each time a band sets up on the barn stage to perform. “It feels good when people start rolling in for a show, all those smiles,” Dean says. “I don’t know if a piece of property can collect karma — or how many smile-hours we put in on the farm — but something feels really good about it.”

The hundreds of thousands of tobacco barns that were scattered across the Piedmont in the early 20th century now number only in the thousands, according to Annie Rubel, who visited the barn five years ago while doing research for her UNC Greensboro master’s degree in historic preservation. At first, Dean feared that Rubel would disapprove of the family’s decision to convert the barn into a stage, but she assured him that the barn “loves what you’re doing with it.” Rubel saw the project as a dignified way to reuse and adapt an iconic structure. “The idea that the barn was a gathering place for the entire community during harvest — it is so fitting that [Dean] would have created a music venue and culture site that was for a tight-knit community,” Rubel says.

She assured him that the barn “loves what you’re doing with it.”

Since most of what the Drivers know about the history of the farm and barn is anecdotal — Laurel’s father told them that it dates back to 1880 — Don Dixon’s questions about the property’s musical history may never be answered. But one thing is for sure: Central North Carolina has been a hotbed for string-band music since the 19th century. Charlie Poole, a Randolph County native who worked at textile mills in nearby Alamance and Rockingham counties, became an early star of country music, playing banjo with his band, the North Carolina Ramblers, and singing songs such as “Can I Sleep in Your Barn Tonight Mister?” Cousins Joe and Odell Thompson, who lived outside of Mebane, some 25 miles east of Doodad Farm, carried the African-American fiddle-and-banjo tradition into the late 20th century. Joe Thompson mentored the Carolina Chocolate Drops — the string band fronted by musician Rhiannon Giddens — before his death at 93 in 2012. Thompson once told Wayne Martin, the executive director of the North Carolina Arts Council, about hearing a banjo player named Johnny Wade, who “used to sit by the tobacco barn every night,” Thompson said. “He’d be curing tobacco and sit out there, and you could hear him clean across the country.”

While transforming Doodad Farm into a performance venue, the Drivers not only drew from their deep love of North Carolina’s music history, but also from their careers in science — Dean is a retired aerospace engineer; Laurel works as a chemical engineer for the U.S. Environmental Protection Agency in Research Triangle Park. Applying their technical knowledge to farm buildings and the surrounding landscape, they shored up the barn’s foundation and built an elevated wooden floor above the original dirt floor. Poles once used to cure tobacco became rafters for the stage roof. They were resourceful: When they saw that some of the wood on the north wall was rotten, they cut it out and created an alcove just large enough for a drum kit.

Over the years, the Drivers and their Beat Farmers have faced some challenges keeping the barn in good shape for concerts. Like most tobacco barns, Doodad’s stage barn was built Lincoln Logs-style, with chinking to fill the gaps between the logs. When the chinking deteriorated, the Beat Farmers were tasked with the slow, tedious process of replacing it. A mixture of cement, sand, and lime was applied to a steel-mesh framework. “When we’re doing maintenance and people are having to get up on the roof, it comes home real quick that this is not modern-day building techniques,” says Jeff Telander, a frequent volunteer at Doodad.

Riley says that the ongoing investment of time and energy is what’s kept volunteers like Telander committed to Doodad. “It cut into your hands,” she remembers of the chinking process. “It was terrible, but it was also beautiful. There were lots of hands helping.” 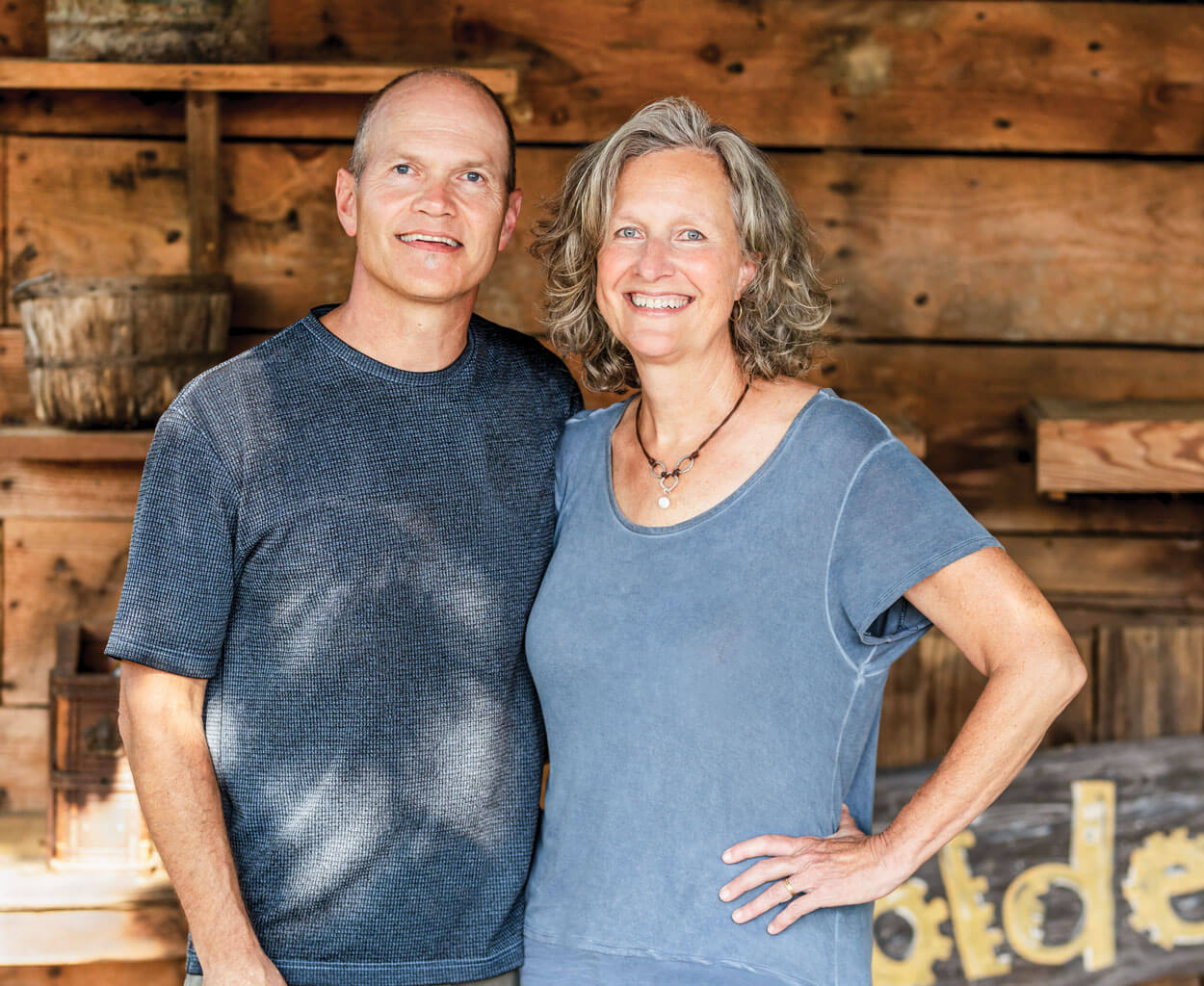 Before they began harvesting art and music at Doodad Farm near Greensboro, Dean and Laurel Driver worked as engineers. photograph by Eric Waters

Today, Doodad has become such a hot spot among regional musicians that Dean has to whittle down some 600 requests a year from performers hoping to play at one of the farm’s 12 yearly events. The modest numbers for the more intimate crowds at the regular shows can expand into the hundreds for bigger events, such as the Groove Jam Music Festival, an annual fund-raiser for Greensboro Urban Ministry that’s held in September. Last year, Dean experimented with a nighttime “unplugged” series that left a profound impression on Greensboro singer-songwriter Abigail Dowd. “The sun had already set, and it was about a half moon, so the light was just perfect,” she remembers. “You could hear all the crickets. I thought, ‘This is what music used to be. You’d sit on the porch and everybody’d play music.’” 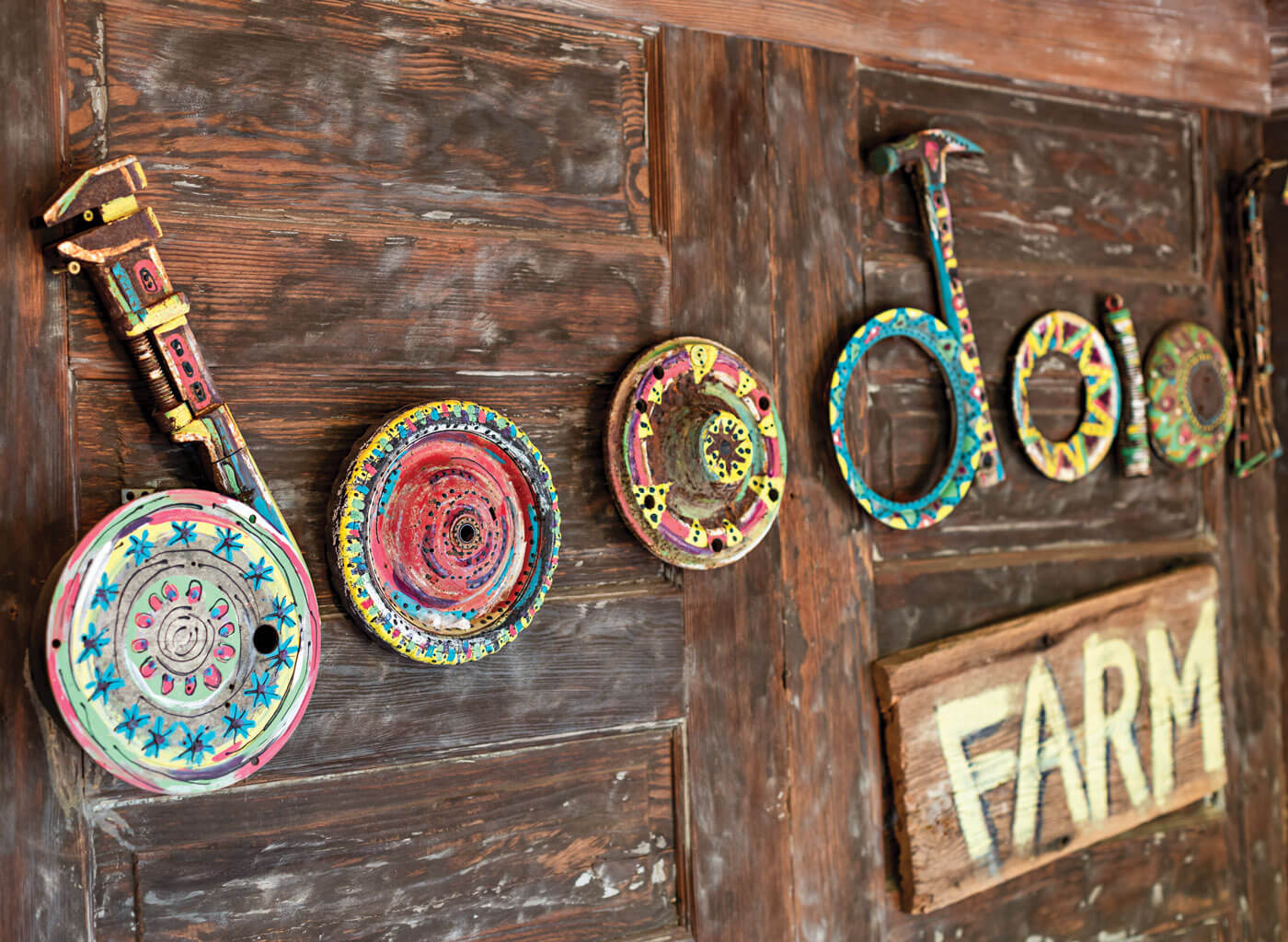 The Doodad Farm signs scattered around the Drivers’ property are made of random objects, from farm tools to old wheels. photograph by Eric Waters

Right now, everybody’s listening to music as Rissi Palmer pauses after her performance of Franklin’s “(You Make Me Feel Like) A Natural Woman.” The singer looks around at the splendor of her surroundings, then tells the crowd, “My great-grandmother had an amazing house, and this reminds me of it.” Palmer loves playing Doodad Farm so much that she’s scheduled to perform here again the following weekend. She has an original song she calls “Summerville,” which recounts childhood memories of her great-grandmother’s home in northwest Georgia. And when she sings it the next weekend — on this same barn stage, on this same bucolic patch of farmland — the lyrics ring just as true right here on the Drivers’ farm: Shed a tear, crack a smile, when I let my mind wander down that country mile where love is real.