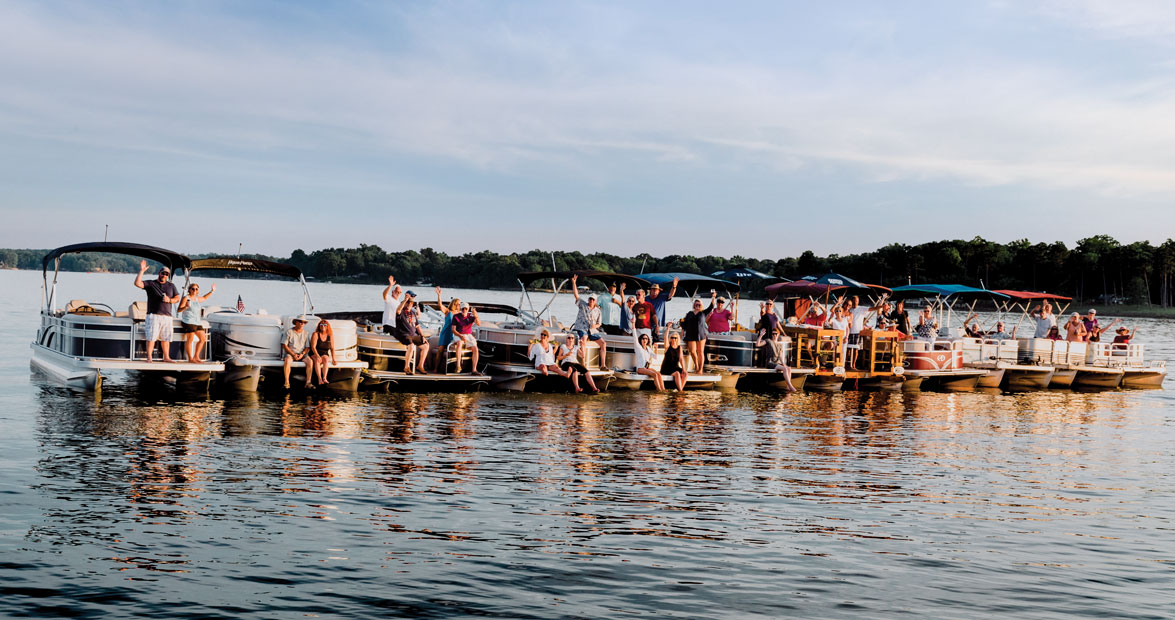 A silvery pontoon boat pulls up alongside Jim and Paula Noonan, music blaring. “How are you, hon?” yells a woman in sunglasses and a bathing suit cover-up. “Hey darlin’, good to see ya!” Paula hollers as she helps secure the boats, linking them with the three pontoons floating together on High Rock Lake. Meanwhile, another pontoon has already pulled up next to the first one — followed by another one — adding to the growing chain. Soon, 13 pontoons are lined up and tied together, bobbing in the middle of the lake near the mouth of the Yadkin River.

Jim slaps a few more pork chops on the grill, each landing with a satisfying hiss. Paula cranks up the classic rock playing from a miniature speaker. Women in visors and capris (just the right length for dipping toes in the water) carefully step from boat to boat, carrying appetizers, sides, or desserts they’ve brought for dinner. Gentlemen in fishing tournament T-shirts exchange hearty greetings as they cross through side doors and balance on bows. Everybody calls each other “hon” or “baby” or “darlin’,” regardless of relation. Here at the High Rock Redneck Yacht Club, there are no strangers.

“This is the friendliest place I’ve ever lived,” says Paula, a longtime real estate agent in the Lexington area. She and Jim built their lakefront home in 1998, after they got married. In the summer, the Noonans and a few of their lake friends would gather on the water for dinner and drinks. The group became a Thursday night fixture in the early 2000s, thanks, in part, to Linda Webster, who spearheaded the effort to organize the festivities.

“Sometimes we don’t have more than four, five, six boats; sometimes we have a whole bunch,” Linda says, sporting a faded “High Rock Redneck Yacht Club” tank top over her bathing suit. “It grew from a very small gathering to what you see now,” she continues, motioning to the dozens of people, almost none of them on their own boats by now. Then she nods toward Paula and Jim’s boat: “The Dam Thang came to fruition about two years ago, and that’s been a real asset.”

Dam Thang is the Noonans’ pontoon boat-and-bar creation, which they attach to the port side of their main pontoon. Tricked out with wooden countertops, stools, umbrellas for shade, and a grill, sink, and cooler in the back, it’s the perfect vessel for a floating party. 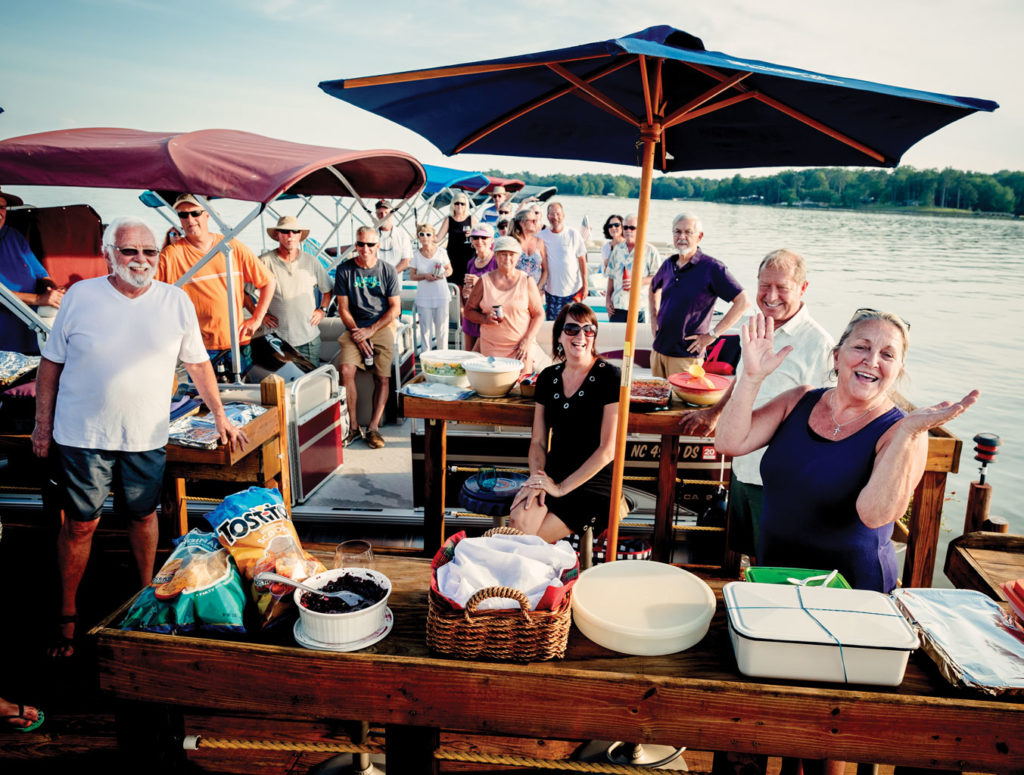 Before dinner, Paula Noonan (right, foreground) makes announcements and blesses the food, which lines the counter on Dam Thang. photograph by Charles Harris

Before Dam Thang, the group would squeeze around a folding table on one of the boats, which just about sank it every time. Meanwhile, Paula had a broken pontoon platform that she had hoped to use as a floating pier, but lake regulations wouldn’t allow it. “We just had it sitting there,” she says, “so my husband comes up with this brilliant idea, and I’m thinking, Why? Why does it have to be us?”

Jim worked on the new project for about a year, often to Paula’s chagrin: “I would say, ‘Honey, can you go do something for me?’ And he’d say, ‘No, I’m going to work on the boat today.’ ” Her reply: “That damn thing!” The name stuck.

Now, standing in the middle of Dam Thang, Paula whistles and calls out, “Get a little closer, everybody, but don’t sink the boats!” The group quiets down as she introduces two newcomers, Adam and Nicole, who haven’t been able to get out until today because the water at their dock has been too shallow. She thanks God for “this time of frivolity and joy” and blesses the covered dishes lining the counter: pasta salad, blueberry salsa, casseroles, watermelon, cookies and brownies, and Jim’s signature pork chops, hot off the grill. “Sometimes we have all desserts and one chicken plate, and sometimes we have all salads,” Paula says, laughing. “But it doesn’t matter — we’re out here for the camaraderie.”

After dinner, someone makes a joke about jumping into the lake, which is all the prodding anyone needs to cool off. One man leaps in with an unopened can of beer still in his hand. Others hold their sangria aloft while balancing on pool noodles. They clink their glasses together as one happy swimmer calls out, “Lake life is the best life!”

When the sun dips closer to the horizon, offering up a grand finale of pink and orange streaks, Paula turns sentimental thinking about what these weekly gatherings mean to her. “It’s tradition, it’s sharing, it’s …” she pauses. “It’s just what it is. It ain’t nothin’ special. It’s just real special.”

As night begins to fall, the boats disperse as quickly as they arrived. Jim and Paula are among the last to leave, pulling Dam Thang along with them, their boat’s white mooring lights blinking as they ride off into another sunset.