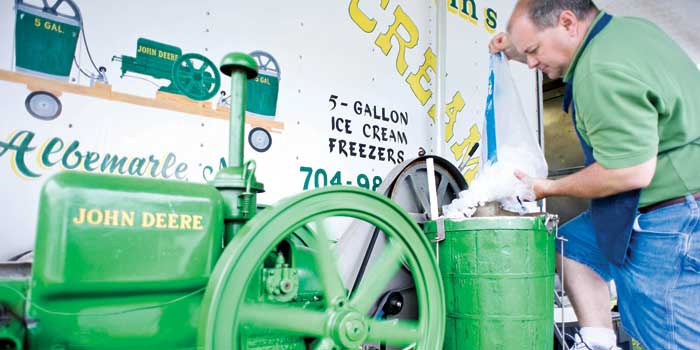 Homemade ice cream is an in-the-moment food.That long-awaited moment when the crank becomes hard to turn or the motor starts to whine. That’s when you know it’s done. The moment when it’s cold, creamy, and thick.

If you’re late, it melts.

“You gotta be quick,” Wes Morgan says as he lifts the five-gallon canister from its icy bath, removes the lid, and pulls out the dasher. Vanilla ice cream hangs on like honey on a comb. He scrapes it off with a big scoop, pours the ice cream into a stainless-steel pot, and sets it in the chest freezer. He made it.

Five days a week, Wes runs Rolling Hills Cotton Gin in rural New London. But on the weekends during the summer, he’s the ice cream man. Wes, 43, and his brother, Todd, 48, run Poppin’ John’s Homemade Ice Cream and set up at events and festivals throughout North Carolina and just across the state line. (Story continues below the video.)

Video produced exclusively for Our State by Jenny Tenney.

Amid crowds of festivalgoers and food vendors, customers find their way to the Morgans’ gooseneck trailer with the green-and-yellow logo by following the sound. It’s an unfamiliar racket to most people, but to those who know, it’s the sweet sound of ice cream being made the old-fashioned way.

The Morgans use John Deere hit-and-miss engines that date back to the 1920s and ’30s. People used hit-and-miss engines to provide power back when electricity was a luxury. They purchased them from the Sears, Roebuck & Company catalog and used them to accomplish everyday tasks, such as cutting wood and shelling corn. Today, the engines are novelties for mechanical tinkerers like the Morgans.

A hit-and-miss engine has a loud, irregular rhythm. Ch, ch, ch, ch, ch, ker-putt. This rhythm earns the engines the nickname “putts” and gives the ice cream business its name. Similar to a typewriter, the engine chugs along until it reaches the end of a line, so to speak, and then it makes a backfiring noise.

Curious and wide-eyed, people crowd around the noisy contraption. They point and speculate. Wes likes to hear their theories. Some think it’s an ice-cream-making machine, that you put the ingredients in one end, they go through a motor, and come out the other end in the little pail sitting on the ground. “That’s the sugar he’s pouring in,” one man tells his young son.

Wes chuckles. “The ice cream is inside this little can, underneath the ice, right in here; it never goes anywhere,” he says. The three-horsepower engine sits in the center of a wooden cart with a five-gallon ice cream freezer on each side. Two belts run from the engine, one to each freezer, and turn the canisters with the ice cream inside. The dasher churns the ingredients, and as the ice cream gets colder, it gets thicker. Each canister sits in a wooden bucket filled with ice. Wes pours salt, not sugar, on top of the ice — melting ice is colder, which makes the ice cream freeze quicker. The briny runoff drains into a little pail sitting on the ground that collects the dirty water, not the ice cream.

It’s all right with Wes if you get the process backward; his favorite part is teaching. “That engine usually sells the first bowl,” he says, “and that ice cream sells the second.”

The Morgan brothers make that ice cream from their grandmother’s recipe.

Wes and Todd’s mother, Jean Millspaugh, 68, remembers her parents making ice cream when she was growing up. She would sit on top of the ice cream freezer and turn it by hand. It was a special treat on hot afternoons in the country, and the final product was worth every crank.

Today, she helps her boys with the Poppin’ John’s business. She’s proud to serve scoop after scoop of her mama’s recipe. A couple of years ago, Jean had surgery on her thumb; she wore it out dipping ice cream. But she’s back at it now. She reaches deep into the chest freezer and pulls up an oversized scoop of ice cream. She slaps the lid closed quickly before too much of the cold air rushes out.

“My mother was quite a cook,” she says. “My daddy was always very picky about taste. If it passed Daddy’s taste test, everything was fine.”

So Poppin’ John’s ice cream still comes the way Jean’s father liked it, unadorned. For $3, you get one five-ounce scoop in a plastic-foam bowl with a plastic spoon and napkins.

“When they ask for a waffle cone and all that stuff, I tell ’em ice cream is good enough without anything to decorate it,” Jean says. The only choice you have to make is what flavor.

Every flavor begins as vanilla. Then they add fruit to make cherry, strawberry, peach, and banana, or cocoa to make chocolate. The whole process happens quickly in the mobile kitchen the Morgans pull along with them. Inside the 32-foot trailer, they have a freezer, refrigerator, sink, generator, and water heater.

On top of the stainless-steel workstation, Wes peels overripe bananas and drops them into a blender. You have to catch bananas at the right moment, just before they spoil, to make good ice cream, he says. He dumps in the bananas and adds one spoonful of yellow food coloring, which distinguishes the banana from the vanilla.

Wes remembers the first time he tried the food-coloring trick at an antiques show in Hillsville, Virginia. The bright sun made it hard to see the tiny black specks in the banana ice cream, so he went to the grocery store and bought a bottle of yellow food coloring. He remembered his momma using a whole bottle of red food coloring in her red-velvet cake, so he dumped the entire bottle in the five-gallon freezer.

“It was school-bus yellow,” he says, laughing. Adjusting ingredients is just one lesson, but the ice cream business comes with many. “It’s just stuff we had to learn,” Wes says.

Since the business began in 1989, Wes has learned the ins and outs of North Carolina laws regulating food production, sales, and storage. He’s learned how to estimate how many freezers of ice cream to make and when to make them. And he’s learned where different flavors sell best.

At home in Stanly County, cherry is a local favorite. At the Southeast Old Threshers’ Reunion in Denton, the biggest show of the year for the Morgans where they sell hundreds of gallons of ice cream, peach and vanilla are the best sellers. But in Charlotte, chocolate is the most popular.

“The people in Charlotte are your Neapolitan: vanilla, chocolate, strawberry,” Wes says. “They get it at Wendy’s, McDonald’s, and they get it at the grocery store.” The people in bigger cities didn’t grow up with orchards or berry thickets down the road. People stick to what they know.

The Morgans stick to ice cream. In the beginning, they catered some events and served ice cream for dessert. Now, they stick to the sweet stuff.

“It’s a hobby, supposedly,” Wes says, “but I have to convince my wife of that sometimes when we’re driving home at midnight.” This year, Poppin’ John’s will set up at about 25 events — it was once as many as 50. But they’re trying to cut down, Wes says. When you turn your hobby into a business, it becomes work. And he doesn’t want that to happen. Ice cream is supposed to be fun.

On those days when Jean works behind the scenes assembling the ingredients a week before an event, or on those mornings when her boys head out at 5 a.m. for a fair hours away from home, it’s easy to forget the fun part.

But every time Wes and Todd draw a crowd of admirers around the old engine, and every time Jean serves a satisfied customer, they find the moment they’ve been waiting for.

September 24
Celebration of the Arts, Hiddenite