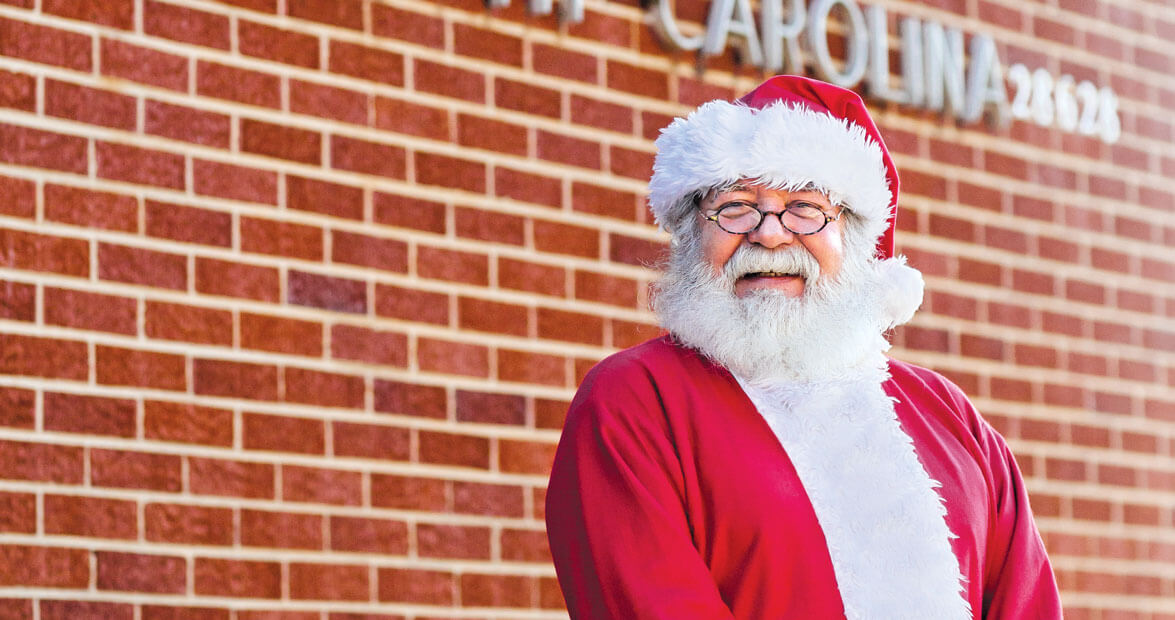 anta Claus is worried. His head elf, Blake, is getting older. He’s 13 this year, and kids that age aren’t into the whole “Santa thing.” Finding someone to replace his right-hand elf — the one who hands out lollipops, smiles for pictures, and wrangles all the starstruck toddlers — won’t be easy: There just aren’t that many elves looking for work in this town of 1,500.

When he’s not hiring helpers or asking good little girls and boys what they want for Christmas, Danny White, 72, is Glen Alpine’s postmaster. White enjoys his day job, making sure his neighbors get their mail and packages, but his true passion is becoming Santa: donning the red suit and greeting kids here in the lobby of the Glen Alpine Post Office.

“I like this time of year, seeing people appreciate the season, seeing little kids spread their arms and give Santa a hug,” White says. “I still enjoy these older traditions.”

Every year for more than a decade, White has started growing his beard on June 1 so that it’s full and white come December. “When the older kids see me growing my beard out, they know it’s me,” White says. “But then again, when you put on the red suit, everything changes.”

As Christmas approaches, he decorates the post office with a small Christmas tree in the front lobby. There’s holiday music playing from a speaker next to a sign that reads, “Believe.” The decorations aren’t lavish; there’s no fake snow, no forest of greenery. But it doesn’t matter to the kids. All they see when they walk through the door is Santa in his red suit and white beard.

Danny’s wife, Doris, takes pictures of the kids when they visit. She has prints made and hangs them on the bulletin board, like a really cute version of the “Most Wanted” mugshots that hang on post office walls. Parents can come back into the office and take them home for free.

“We only had a few kids come in that first year I did it,” White says. “But last year, we had about 25 kids come in. It’s growing.”

This isn’t a big-city mall-Santa situation, where kids line up for hours to sit on the big guy’s lap. Here, they trickle in throughout the morning. White bought 120 small stuffed animals at the beginning of the season for every kid who walks through the door. A 2-year-old boy gets a duck, and his mother tells Santa about the family’s real ducks, named Charlotte and Wilbur, on their pond at home. Babies sit on White’s lap, fascinated by his beard. Little girls come in wearing sparkly dresses. One boy asks for worms for his lizard. A lot of kids want dogs. Shih Tzus, mostly.

Santa — and the spirit of Christmas — lives here, at the Glen Alpine Post Office.

White knows most of the people who come in by name or by post office box number. He knows their kids, knows where they work. For his first couple of years in Glen Alpine, White took pride in answering letters to Santa himself, but now, “corporate” has him send those letters to Raleigh. “I loved responding because I personally knew the children that were writing those letters,” he says.

In between visits, he grabs packages and works the counter. An older gentleman brings in a box to mail, sizes up White’s outfit, and asks, “Cold up North?”

White doesn’t miss a beat: “Not too bad.”

They start talking about their grandkids. White has seven, scattered between toddler and teenager. He and the older gentleman agree that they don’t get to see their grandkids as much as they’d like. But White can’t dwell on that for long because there’s another kid coming through the door, and he’s on, into his “ho ho hos” as soon as he locks eyes with the boy.

There are many reasons why a person would don a Santa suit year after year — family tradition, extra cash — but for White, it’s obvious that he plays the role for his town. It’s his way of keeping the tradition alive for all of the kids and families he’s grown to know and love.

A young couple comes in with their baby. Mom and Dad are nervous — they want everything to be perfect, the way new parents do — but they relax when they see White’s smile. Even the baby seems content, maybe even a little mesmerized by that white beard, as he’s propped up on White’s lap for his first photo with Santa.

For anyone who might feel a little jaded about the commercialism of the holiday, or think that visiting Santa has become a relic of Christmases past, you need only pay a visit to Glen Alpine. It’s here, in the post office at the center of town, that Santa — and the spirit of Christmas — finds a home for one week a year. White beard, red suit, and all.