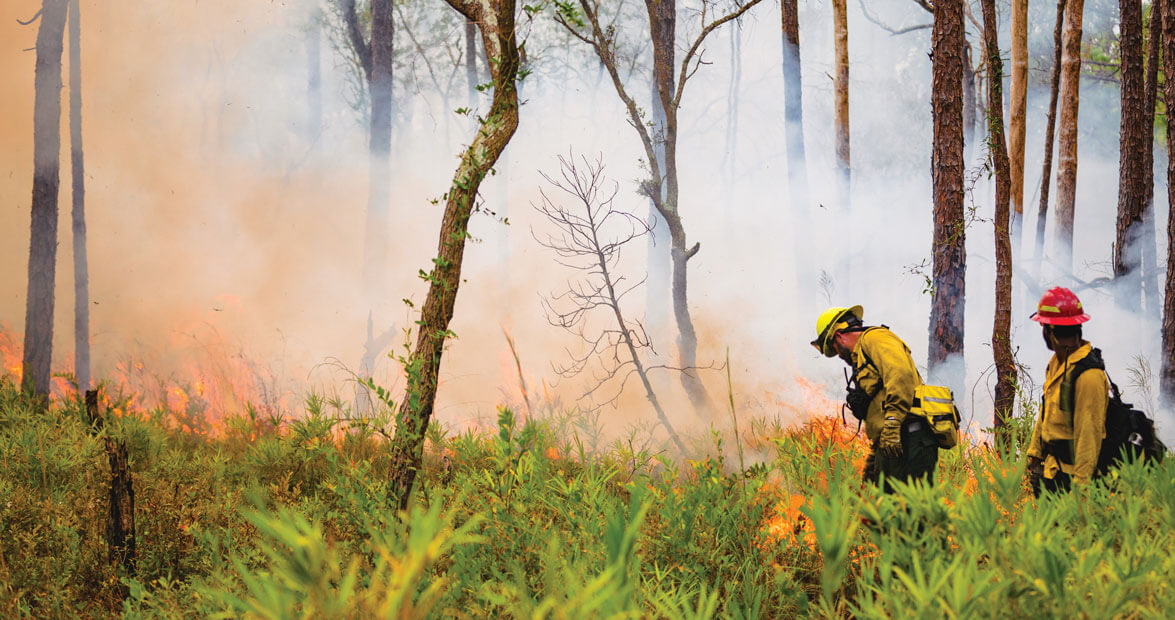 The late morning temperature has reached 85 degrees, and the humidity hangs as heavily as the smoke-scented yellow Nomex jacket that Carla Edwards wears over her shirt. She squints at her map of Carolina Beach State Park, bleached white in the sun’s glare. This park, situated on the Cape Fear River, is where she’s been a ranger for 12 years of her nearly three-decade career. The 761-acre patchwork of maritime forests, sand dunes, intracoastal beaches, and pocosin wetlands is home to thousands of species of animals and rare plant life. As a ranger, Edwards’s job is to protect all of this. She identifies flora and fauna for visitors, enforces park rules, and keeps tabs on precious residents, like clusters of Venus flytraps. But today, she’s helping set a plot of it on fire as a member of the North Carolina State Parks burn crew.

“Everybody has this thing about fire. There’s just something very interesting about what it can do to the landscape,” she says, tucking short wisps of white hair underneath a scarred yellow hard hat. “I love seeing everything green back up after a burn. It’s just amazing how quickly the landscape can go back to being normal.”

Or, if nature hasn’t struck the right balance between destruction and renewal on its own, even a little bit better than normal.

A prescribed burn is an important tool for ecological management and restoration. From the ashes, green shoots will emerge, and the forest’s life cycle will begin again. This burn is particularly important to Edwards because it will likely be her last. She retires at the end of the year, and the meaning of this moment isn’t lost on her: Witnessing all of these endings and beginnings of forest life is only part of what she’ll miss. “I’m going to miss watching the fire, and especially the camaraderie among the burn crew,” she says. “It’s a special connection you have with the people who work the fire.” 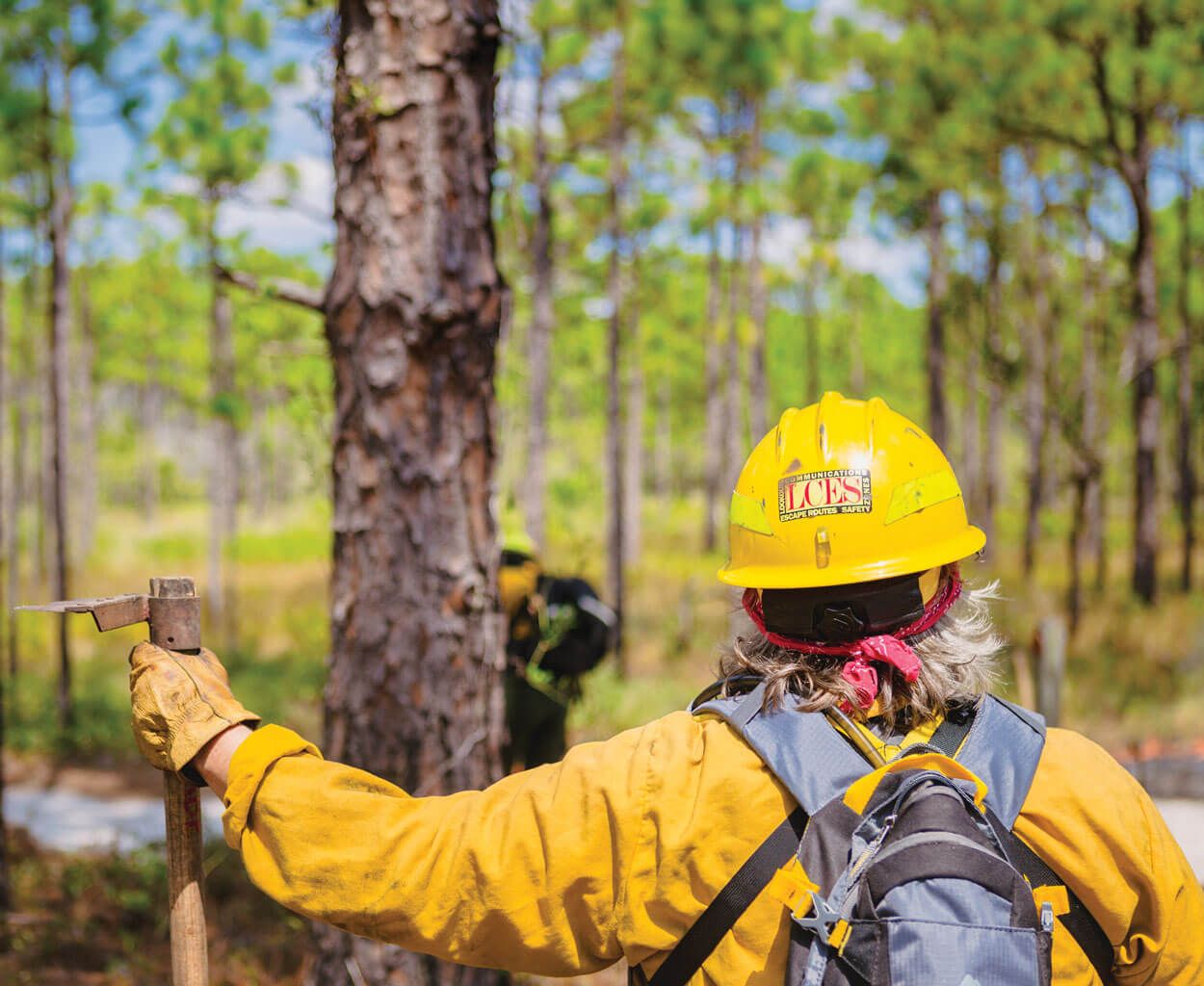 The fire is carefully controlled in a prescribed burn, whether it’s in the mountains or along the coast. The North Carolina State Parks burn crew — a five-person group — is specially trained to conduct burns and to establish and maintain fire breaks. The group travels throughout the state park system, igniting low-intensity fires under highly specific conditions. On burn days, the crew is supplemented by other certified burners, such as biologists from the Wildlife Commission and park rangers like Edwards. Last year, they conducted nearly 60 burns. The “burn boss” — the designated leader of the crew for that particular day — schedules and reschedules the burn date until conditions are perfect: the right wind speed and direction and ideal humidity.

The purpose of these burns is to do what nature once did indiscriminately: Fire opens up forest understories, allowing the seeds of certain trees and plants to germinate, thereby renewing the ecosystem for wildlife. “The habitat here in the Coastal Plain used to burn naturally every one to three years,” Edwards says. “Parts of Carolina Beach State Park should probably burn at least every other year, because that’s what happened naturally. Up in the mountains, those ecosystems burned every five to 10 years.” 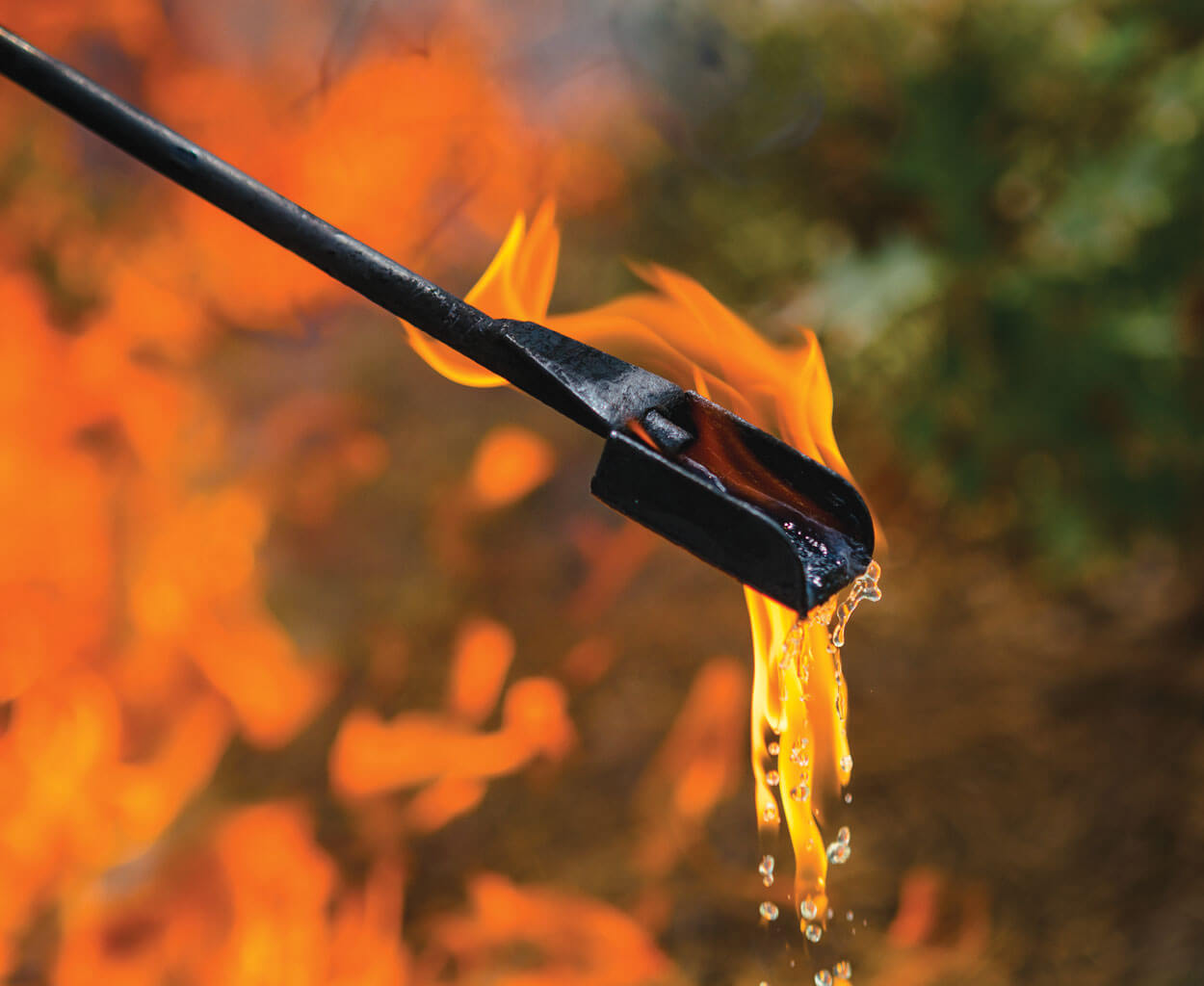 After the burn boss has determined that conditions are just right for a safe and contained blaze, the burn crew sets out with drip torches to light the fire and patrol the perimeter. photograph by Baxter Miller & Ryan Stancil

As fire was suppressed to protect people and property, many fire-dependent plants in the South almost disappeared: Longleaf pine forests that once covered 90 million acres in the Southeastern United States now only cover about 4.5 million acres. In the absence of fire, forests become choked with brush, which alters the conditions necessary for the survival of native plants like Venus flytraps and pitcher plants. The habitat required to produce food and ground cover for small mammals and birds, like the eastern fox squirrel and red-cockaded woodpecker, is similarly disrupted without regular burns.

Edwards and her crew have those plants and animals in mind as they flick cigarette lighters to the tips of their drip torches, which are filled with a mixture of diesel fuel and gasoline. With that, the burn begins, and its stewards take their places around the park. Liquid-like fire is shaken out in sputters from the nozzle of the torch, quickly igniting the soft bed of dry pine needles that delineates the woodline from the dirt path — called a fire break — meant to contain the flames.

As the fire spreads inward from the perimeter, a low roar emerges from the forest, punctuated by the snapping and cracking of branches and undergrowth. The roar grows steadily. Edwards listens. “There’s a lot of fetterbush, staggerbush, and gallberry right there,” she says. “They’re pretty volatile. Once it gets into that, it’ll be pretty impressive.” 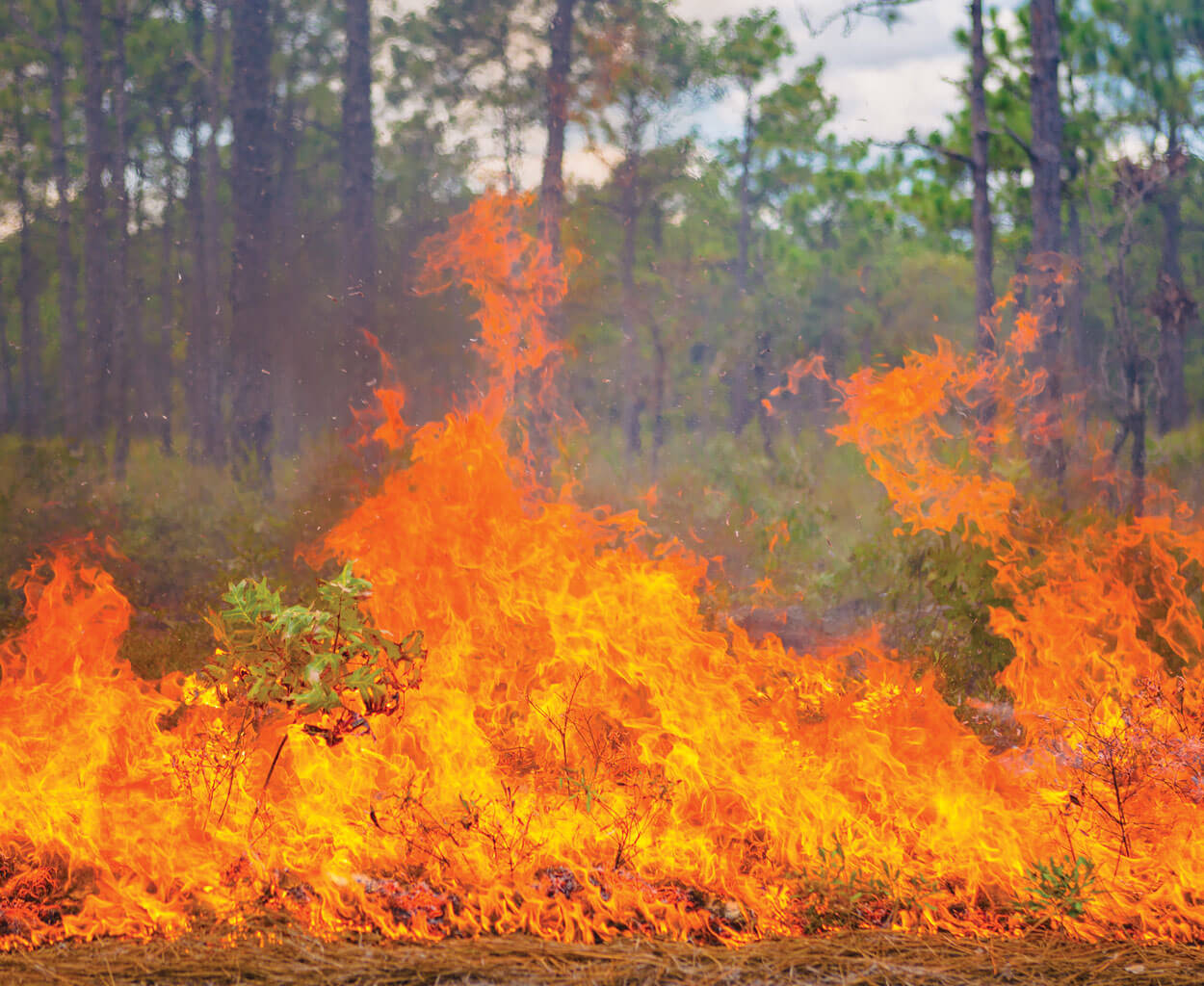 Long before low-intensity prescribed burns shaped the landscape of North Carolina, fires ignited by lightning strikes raged across the Coastal Plain every couple of years. Unencumbered by roadways and development, these naturally occurring fires would travel across thousands of acres, forcing the plants and animals in their paths to adapt or relocate. Native Americans harnessed this phenomenon and employed fire for clearing land and driving game, a practice that European settlers readily adopted in the New World. photograph by Baxter Miller & Ryan Stancil

Amid the roar is the persistent chatter from the crew’s handheld radios: Voices echo through the wire grass and switch cane, orchestrating crew movements to manipulate the temperature, speed, and location of the fire. Wildlife like birds and whitetail deer have moved into other areas of the park, away from the fire, while reptiles and small mammals like rabbits have taken to the safety of their underground burrows or found refuge under logs.

Despite the drama of the smoke and flames, the work is strangely quiet and measured. Occasionally, a burn crew member crosses the fire line to drop more fire inside the burn area, later emerging from the smoke. Walking back and forth, Edwards monitors the fire line. “If the wind picks up an ember and blows it on the other side of the line, you could have a spot fire — a fire that starts outside the burn unit — which is not good,” she says.

The line of fire crawls deeper into the forest, leaving behind blackened, smoldering earth. Smoke billows and wanes as the wind shifts direction. The more combustible the brush, the more intense the heat. Crew members shield their faces with their gloves as they work, seemingly unbothered by the swirling smoke and ash. 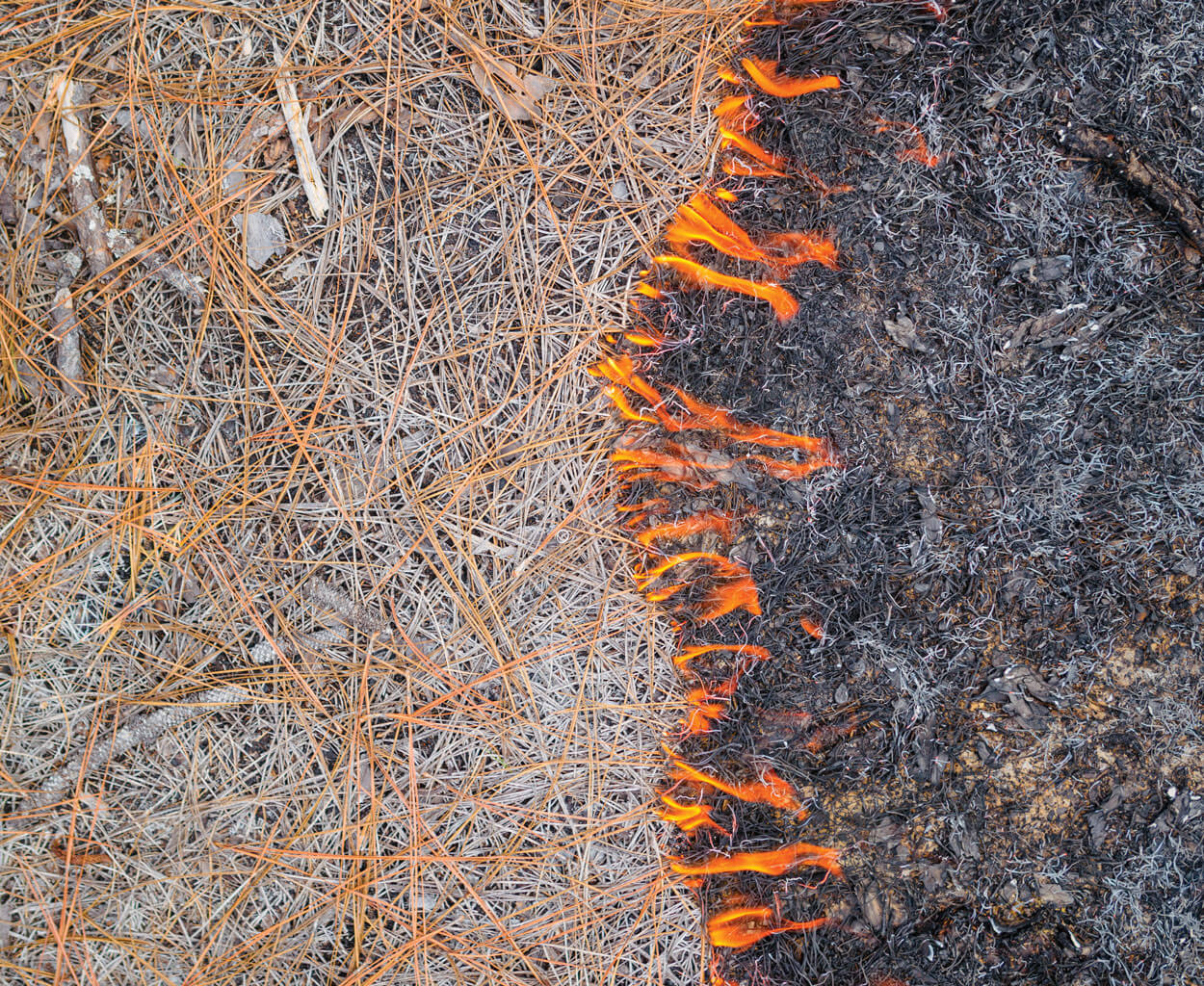 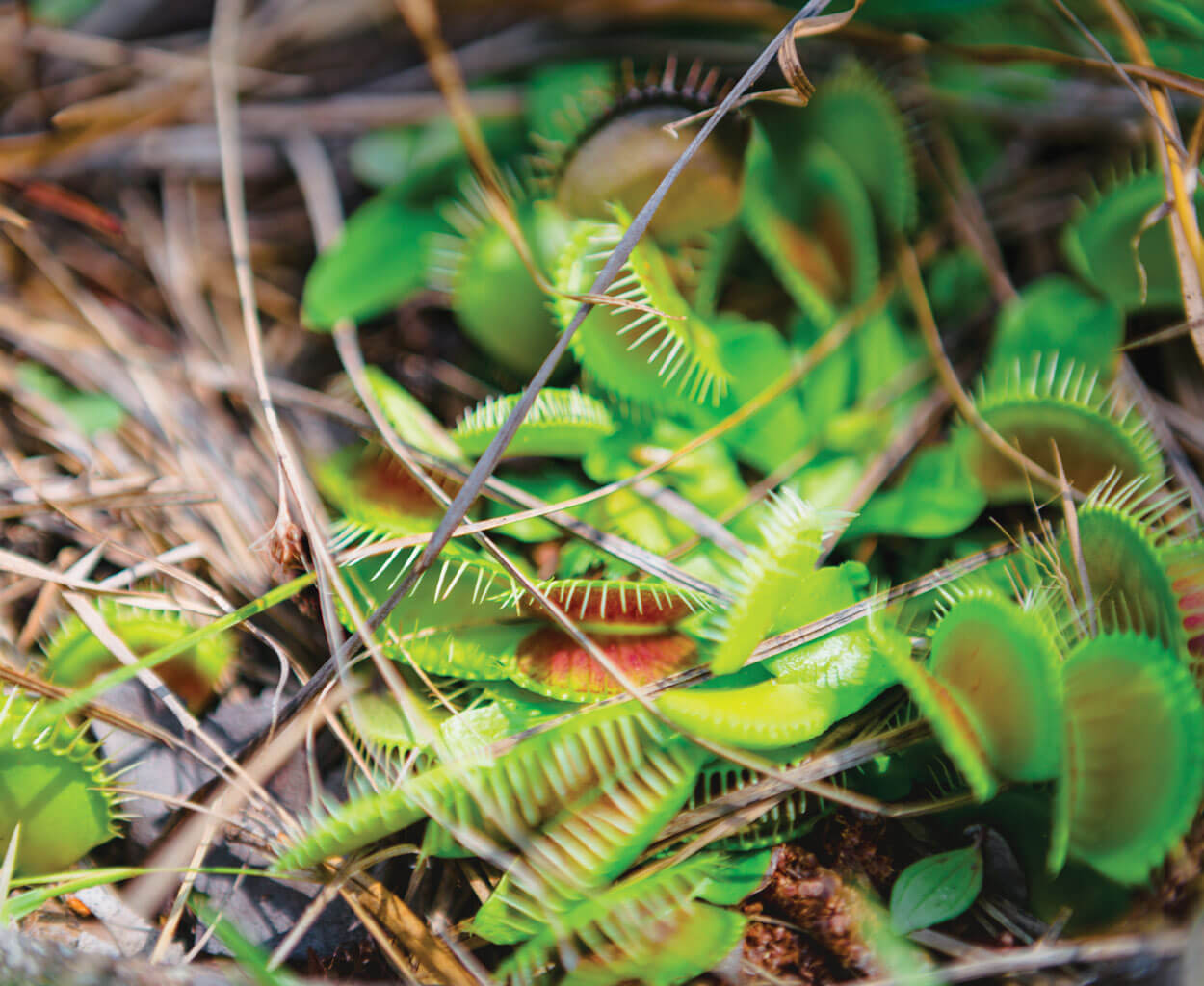 The conditions during a prescribed burn creates the necessary environment for Venus flytraps to sprout anew in what Edwards calls “the honey hole” (above). photograph by Baxter Miller & Ryan Stancil

Edwards points through a break in the smoke to a section of forest that, when conditions are right, is full of Venus flytraps. “That’s the honey hole,” she says. “In the spring, I count all the Venus flytraps in the park. Fire is very important to them to keep down the competition and prevent them from being shaded. Carnivorous plants like sunlight.” As the fire encroaches on the honey hole, a smile spreads across Edwards’s face. When she returns in the spring — this time as a visitor — this blackened ground will be green and thriving. New again.