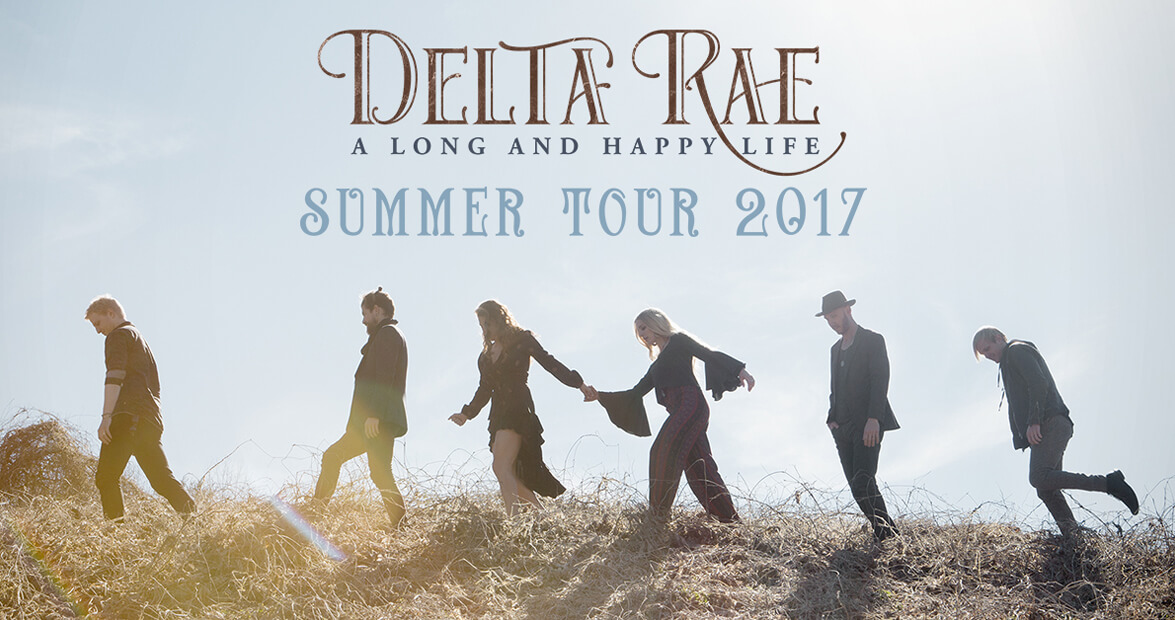 Delta Rae, the larger-than-life, six-piece country band with roots in Durham, hit the road on May 19 to start its summer 2017 tour promoting the release of its newest EP, A Long and Happy Life. The band is led by Liz Hopkins and Brittany Holljes’ dynamic harmonies, rounded out by the talents of Holljes’ brothers, Eric (vocals, piano) and Ian (vocals, guitar), as well as Mike McKee (drums) and Grant Emerson (bass).

Enjoy Delta Rae’s new music video for “A Long and Happy Life” below, and read Our State’s interview with Grant Emerson to learn about Delta Rae’s most recent recording process, how the band has grown, and its Tickets for Teachers campaign.

OS: I’d love to hear about Delta Rae’s latest EP release, A Long and Happy Life, and about that recording process.

Emerson: The recording process for this EP will, in the future, turn into a full-length album and has taken at least a year. We met Scott Borchetta (founder and CEO of Big Machine Label Group) through Julian Raymond, who we met while making our second record, and the two of them really pushed us to make the best music we’ve made so far. We’ve written over 70 songs for this record. All last year we would demo songs, go out on the road touring, and record song ideas on our phones. We went to Nashville when we had breaks to demo the best ones, and then the best ones from that pile got bumped into the final picks — they made the team.

Emerson: It was. But now, being able to show all of our fans these new songs, I’m really excited about it. The process has elevated me personally, and I think we’re so much better and more confident in who we are as a band having gone through that experience.

OS: You said you think that this is the best music you think you’ve put out so far. How would you say your music has evolved since your first EP and album came out?

Emerson: Well, the band released its first EP, Delta Rae (2010), before I joined the band, and then right after that, we made the first full album, Carry the Fire (2012). And it basically would be us saying: If we have 10 or 12 songs, that’ll be the record. But we have four amazing singers in the band, and it has helped us kind of focus our sound because they are so talented. We all play a lot of different instruments — I think we totaled up how many instruments are used on stage and came up with 36. That, in a lot of ways, is what our fans like about us. And I think that’s what we like about being in our band. We can play a ballad, or we can be really theatrical… With the new record, we’re more focused and more intentional, and I also think this record grew a lot, so I’m excited about that.

OS: So Delta Rae is based out of Durham, but are you all from the area originally? What’s your history with North Carolina?

Emerson: All of the guys in the band were born in North Carolina. I believe Ian, Eric, and Mike were all born in Durham, and I was born in Raleigh. Mike and I basically lived in the Triangle our whole lives. Then the brothers (Ian and Eric) were born in North Carolina, then moved to Nashville where Brittany was born. Their family was following their dad’s work, which took them to Atlanta and then to the Bay area, where they met Liz. She’s from the Bay area. They met while singing in a cappella groups, and then all eventually moved back to North Carolina.

OS: What kind of role does North Carolina play in Delta Rae’s music?

Emerson: Even with all of the changes, North Carolina is still home to us. For us, the storytelling that comes from the South is a big influence — especially with our single “A Long and Happy Life,” which Ian and Eric both wrote. They weave in four book titles from some of the band’s favorite Southern authors: The Prince of Tides and The Waters Wide by Pat Conroy, Lie Down in Darkness by William Styron, and A Long and Happy Life by Reynolds Price. Ian was actually Reynolds Price’s live-in assistant when he graduated from Duke, so there’s a connection to that. And there’s inspiration from the South, and the realness and earthiness of acoustic instruments… And the nature — this spring has been really beautiful with the magnolia flowers and everything in bloom. There’s a natural beauty here that we very much appreciate. It’s something that sticks with us, especially when we travel then come back home.

OS: What do you all miss most about home when you guys are on tour? What do you look forward to?

Emerson: Personally, I look forward to just making coffee in my own leisure time. I do a lot of long distance running, so I look forward to runs in Umstead Park or through downtown Raleigh. A silly thing that I realized that I miss is the crosswalk sound in Raleigh. In every city the sound is different, but when I’m driving downtown and I hear that crosswalk sound, I know I’m home. It hit me one night when we got back from tour after being gone for several months. And, of course, we look forward to family. We all have a lot of family that still live here, so being able to just get lunch with them and spend time with them is great.

OS: I’d love to hear about the inspiration behind Delta Rae’s Tickets for Teachers campaign.

Emerson: Liz, Mike, and myself used to be teachers before the band went full time. Liz was a preschool teacher, and Mike and I taught private music lessons. In addition to that, I think all of us have had really inspirational teachers throughout our lives, and teachers don’t get a lot of credit. They are the unsung heroes of our communities that are shaping our future in a lot of ways. We just wanted to do something for them to show them that we do appreciate them and recognize that what they’re doing is very important. It’s just a little gesture that we can do to say, We know you work sun up to sun down, but here’s a night of free music, you deserve it, so come out and have some fun. I’ve reached out to a couple of teachers who were nominated to win tickets to some upcoming shows, and it has been really heartwarming to hear all of their stories. It’s so nice to remind them that they are appreciated in what they do, and they’re making a difference. I hope they never forget that.

OS: Does the campaign last throughout the entire summer tour?

Emerson: It does, so we will be meeting a lot of teachers around the country. We’re all really excited about it.

OS: Is there anything else you’d like Our State readers to know about Delta Rae, or anything the band has coming up?

Emerson: We have a new music video on the horizon, and there’s some cool stuff that’s coming up that I’m not allowed to reveal yet. We’re playing at Cat’s Cradle on June 3 — that’s our hometown show, so there should be a lot of family, friends, and fans there that have been with us for a long time. Playing at Cat’s Cradle is really special; it’s legendary. Especially growing up in Raleigh, I would go there to see shows back when you could walk through the front door. We always love hometown shows, so we’re looking forward to it.

Do you know a teacher who deserves a night of free music and fun? Nominate them for Delta Rae’s Tickets for Teachers campaign here.