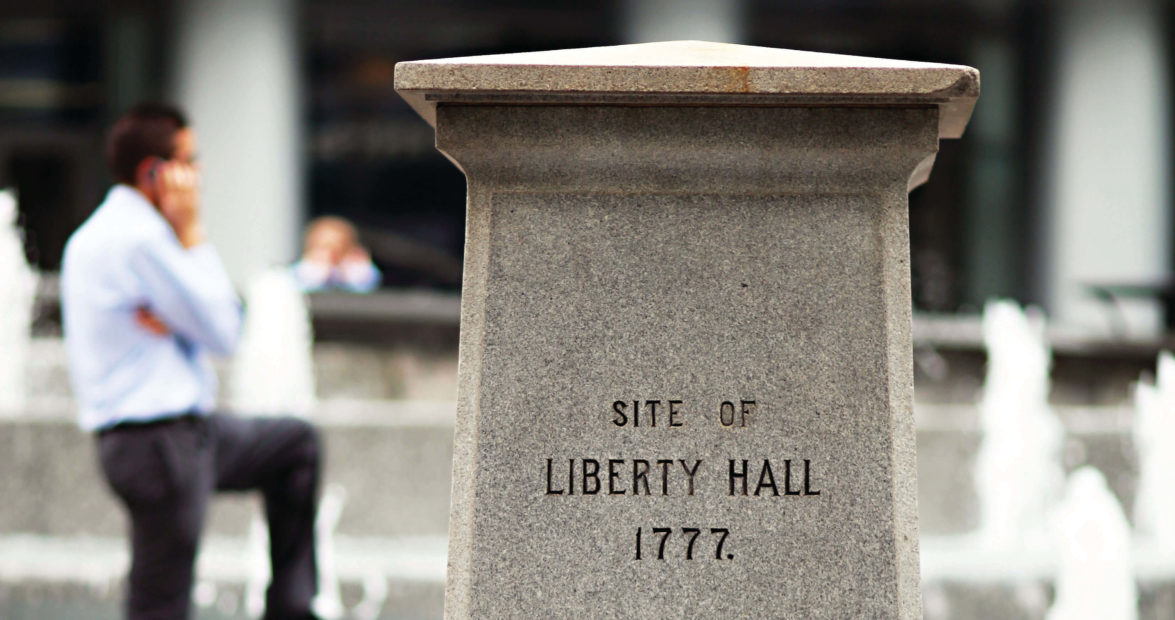 Deep in piney woods, near the crossroads of two American-Indian trading paths, Scots-Irish settlers built a community of rough-hewn log houses that they named Charlotte Town. Those early settlers, some historians say, were “born mad” with the King of England — and their rebellious spirit flared when they set out to establish the first college south of Virginia.

It was 1771, and Charlotte Town was barely a mile square, with only a scattering of homes. The settlers were mostly Presbyterians whose families had come to America in search of freedom and had traveled south along the Great Wagon Road to the Carolina frontier. They were different from the Anglicans who settled the coast of North Carolina.
“They saw themselves as independent,” says Jack Claiborne, a North Carolina historian and journalist. “They resented the fact that the Church of England kept sending missionaries out among them to try to evangelize them. They wanted to educate their own people in their own way.”

The leaders within the community had studied at Princeton, then called the College of New Jersey. They were sent to North Carolina to build churches and gather settlers into the Presbyterian fold. They established seven churches near Charlotte Town, and each church had a seminary of learning — or high school. But when students finished those academies and were ready to go on to college, they were forced to leave home and travel to William and Mary in Virginia, or as far away as New Jersey. The settlers wanted a college of their own.

“Presbyterians are a people of the book — the Bible,” Claiborne says. “They want preachers who can read and write and interpret the scriptures. They want people who sit in the pews in church to hold their preachers accountable. That’s why they wanted to create this college. Education was the way you got ahead in the world.”

A college for his queen

The Reverend Joseph Alexander, a 1760 graduate of Princeton, helped organize the first classical academy near Charlotte Town in a picturesque corner of the county near Sugar Creek. He and his colleagues drew up plans to convert that school into a college and chose a name they hoped would placate the king: Queen’s College, in honor of his German-born queen, Charlotte of Mecklenburg-Strelitz.

“The leaders in Charlotte were convinced that the uneducated would remain servile,” says Mary Norton Kratt, author of Charlotte: Spirit of the New South. “First you had to feed and clothe your family, and then you had to be educated. That was one of their doctrines.”

Being a crossroads, Charlotte was a popular stop for traveling merchants, and tavern keepers outnumbered doctors and lawyers. The Presbyterian leaders decided to pay for their new college with a tax of sixpence a gallon on “all rum or other spirituous liquors” brought into the county. “Those are the days when men took their corn to market in a barrel,” Claiborne says. “It would spoil before you could get it there any other way. They distilled it, and then sold it. They would support the college with a tax on those liquors.”

They built the college two blocks from the little courthouse near the center of Charlotte Town, at the corner of what are now Tryon and Third streets. It was a modest structure, furnished simply with wooden desks and log benches. The charter promised that the college would be run according to “the Laws and Customs of the Universities of Oxford and Cambridge or those of the Colleges in America.” In truth, the colonists planned to run it according to their own Presbyterian beliefs.

King George III refused to support any college not under control of the Church of England. Within a year, he revoked the charter. “He did not want a rival religious institution stirring up trouble among people and raising hell about having to pay taxes to England,” Claiborne says. The king feared an institution of higher learning would encourage democratic, anti-royalists views — and the next few years proved him right.

The college was said to offer the best education south of Princeton, except for William and Mary. Presbyterian ministers made up most of the faculty and, in addition to Hebrew and Latin, they taught the importance of civil and religious liberty. They continued to hold classes without a charter while the trustees petitioned the king a second time under a new name, Queen’s Museum.

But again the king denied their request. His refusal angered the trustees. No king thousands of miles away was going to tell them how to lead their lives, much less how to educate their children. They opened the halls of the college to literary societies and political clubs where the fate of the colonies was hotly debated. It was at the college, some historians believe, that the first discussions were held that led to the adoption of a Mecklenburg Declaration of Independence on May 20, 1775. In that declaration, the rebellious settlers of Charlotte Town renounced once and for all any allegiance to the King of England.

Fourteen months later, after the American colonies declared independence from Great Britain, the Legislature in North Carolina stripped the college of its royal title and bestowed on it a name befitting the mood of the country: Liberty Hall Academy. The Legislature granted the long-awaited charter in 1777, writing in the act of incorporation that “the proper education of youth in this infant country is highly necessary, and would answer the most valuable and beneficial purposes to this State and the good people thereof.”

But the joy over finally winning approval was short-lived. As fighting escalated in the American Revolution, classes were suspended and the building was turned into a hospital for injured American troops. Many current and former students joined the militia. One student, William Lee Davidson, became the leader of a regiment of 400 men that ambushed General Lord Charles Cornwallis as he advanced on Charlotte in September 1780. Cornwallis expected the people of the town to welcome him and was surprised to be greeted on the outskirts by gunfire. Two other students, William Davie and Joseph Graham, led companies of soldiers who continued the barrage as Cornwallis and his troops marched through town. Cornwallis felt so humiliated and harassed he called the area “the hornet’s nest of rebellion.”

He took over the college as a hospital for his own injured troops and hid his losses by burying dead soldiers in secret graves behind the building. After the Patriots defeated the British a month later in the Battle of Kings Mountain, Cornwallis fled Charlotte and left the building in a state of disrepair.

The college never recovered from the war. The Legislature in 1784 transferred it to Salisbury, but it quit operating shortly afterward and Liberty Hall reopened in Charlotte as a high school. President George Washington, in a visit to the city in 1791, noted that there was a school for 50 to 60 boys and a courthouse, but he called Charlotte “a trifling place.”

Despite the fact that North Carolina’s first attempt at higher education was short-lived, graduates of the college went on to distinguish themselves in the annals of the state’s history, and the current Queens University chose its name in part to commemorate the original Queen’s College. Andrew Jackson, the seventh president of the United States, is believed by some historians to have studied at Liberty Hall Academy.

Davidson, who was a brigadier general when he led the first ambush against Cornwallis, was killed at the Battle of Cowan’s Ford while trying to block Cornwallis from re-entering North Carolina. Davidson College and the town of Davidson are named for him. Graham served as a state senator from 1788 to 1793. Davie served briefly as governor of North Carolina and is best remembered as a proponent of public education. He helped choose Chapel Hill as the location for the first public university in the United States.

“Queen’s College was clearly ahead of Chapel Hill in using tax money,” Claiborne says. “Had it survived, it would be the oldest living publicly supported institution of higher education.”

Instead, it is a little-known reminder of the determination of the early settlers of North Carolina to be educated — and free.