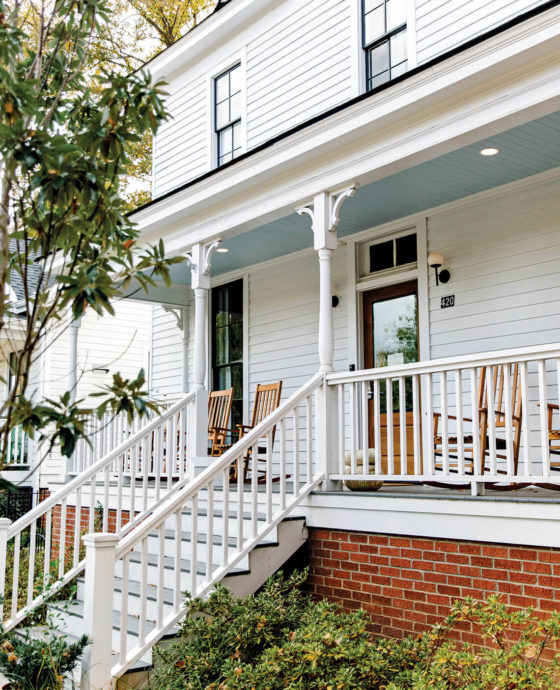 When you step inside the front door of the beautiful Folk Victorian home on South Bloodworth Street, it feels, for just a moment, like you’ve walked into someone’s house unannounced. There’s no giant reception desk, no one with a name tag. Just a front parlor and a study with cozy velvet armchairs, fireplaces, a warm leather couch, and leafy house plants to welcome you — and the feeling that the homeowner has just stepped out and might be back at any minute to scold you for breaking in. 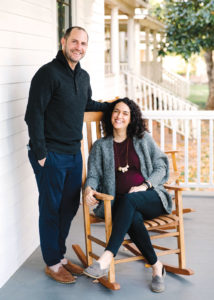 Then you notice the hush, the quiet, the feeling of the place. And owners and designers Matt Tomasulo and Nicole Alvarez know what comes next: “Most often, we just hear, Aaah,” Tomasulo says, mimicking a relaxed sigh, and they laugh.

Guest House, the husband-and-wife team’s eight-room boutique hotel in downtown Raleigh, feels like a home because it was one. In the 1880s, it belonged to one of Raleigh’s first Black mailmen, Arthur Gorham, and his wife, Annie, a well-known teacher. Later, when their daughter, Addie, owned the house, she regularly housed Shaw University students, and eventually left the Gorham House to one of them: her “adopted” daughter, Irene Lane.

In 2017, new owners Tomasulo and Alvarez saved the historic house from being demolished for a new development by having it moved six city blocks through the heart of downtown Raleigh, away from the site where it had stood for more than 130 years. As the stately house rolled slowly down the middle of Wilmington Street on the way to its new chapter, the couple was already crafting their vision: a celebration of the past and a dedication to contemporary comfort — a love note to their city.

“We call the style cozy-contemporary,” Tomasulo says. “It’s a respect for the historic details and practice while also incorporating a modern style. We wanted to show people why we love our city — to be Raleigh’s hosts.” 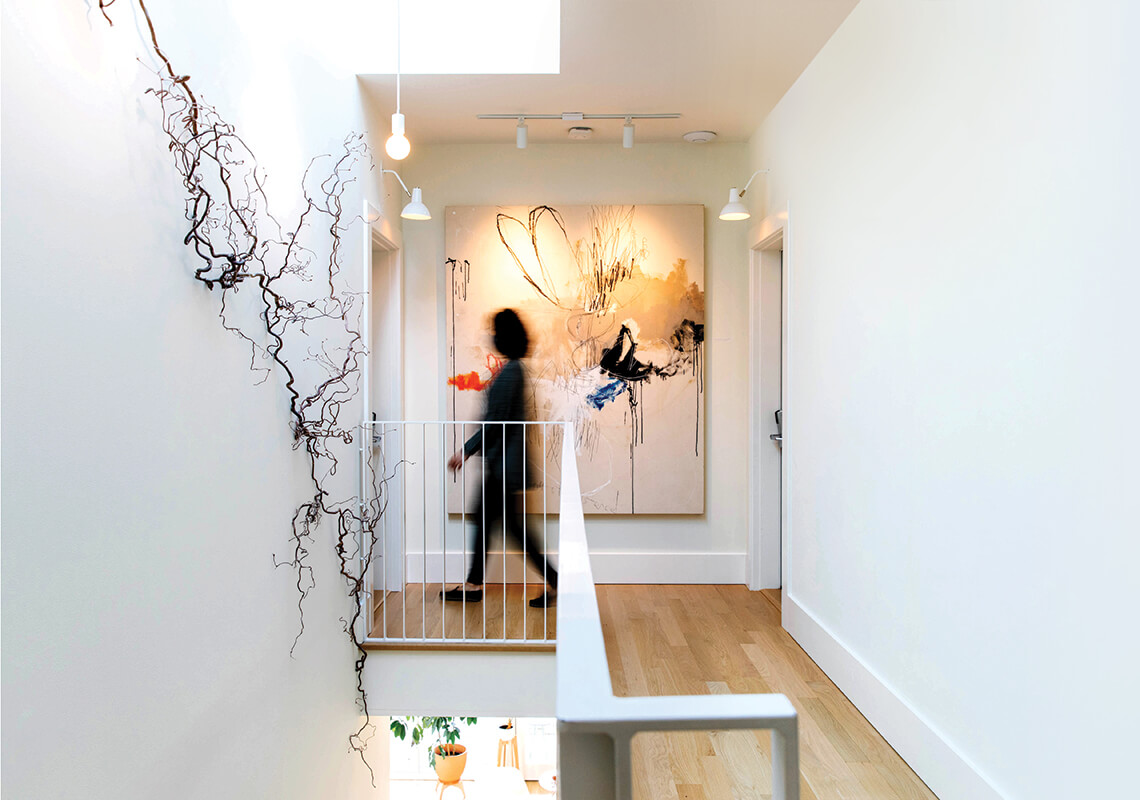 At Guest House, local Raleigh collaborations abound: Custom railings were crafted by Tactile Workshop, a branch installation was created by Wylde Flowers, and the painting is a custom piece by artist Jason Craighead. photograph by Anagram Photo 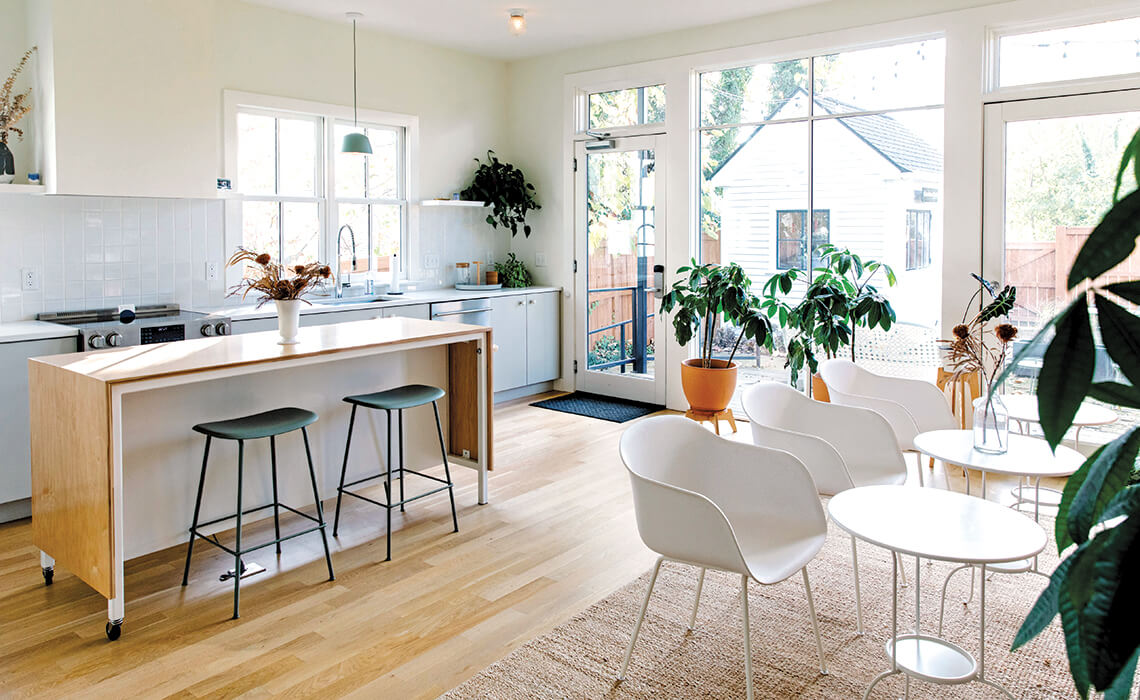 The peaceful modern kitchen is part of a new addition on the back of the house. photograph by Anagram Photo

Rooted in their appreciation of Scandinavian design — Tomasulo lived in Denmark for a time — Guest House marries old and new with simple ease. Guests step first into the past — the original, meticulously preserved parlor and study, with their moodier, darker tones — before moving through what was once the house’s back door, down the hall toward the present — a modern, light-filled kitchen with warm hardwood floors, plenty of plants, and floor-to-ceiling windows overlooking a backyard with a giant, century-old pecan tree. 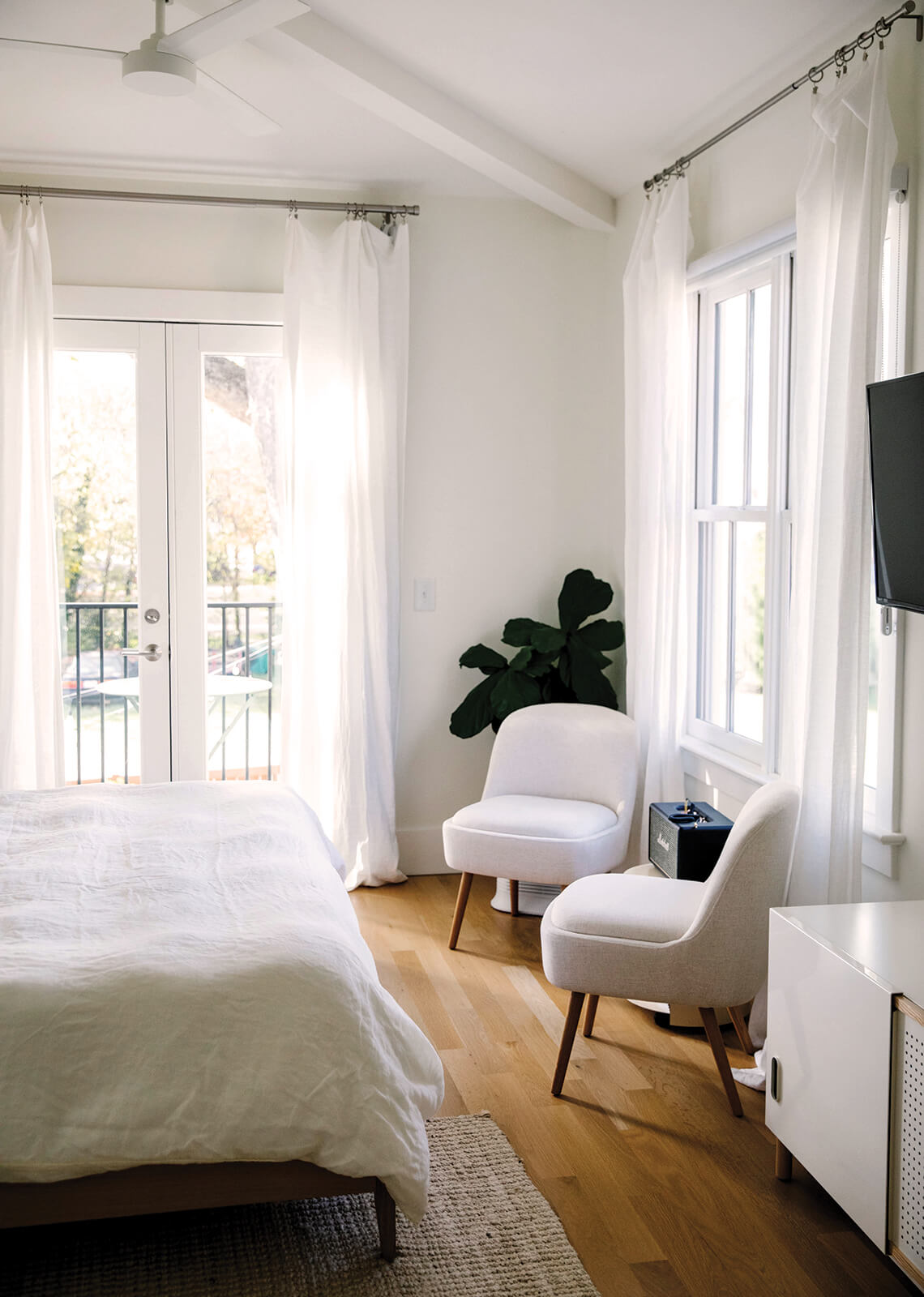 A number of the guest rooms, including this king room on the second floor, feature patios or balconies and a view of the downtown Raleigh skyline. photograph by Anagram Photo

In the guest rooms, beds covered in white linen bedsheets look and feel like clouds, and gauzy, sheer white curtains frame windows filled with sunshine. (There are, of course, room-darkening shades and sound machines in every room, for not-so-early birds.) Skylights throughout bring natural light into bathrooms and hallways.

We didn’t want a creaky bed-and-breakfast — we wanted a hotel that just happened to be inside a home.

“We were really nerdy about testing everything,” Alvarez says. “We knew that if it made us happy, it would make guests happy.” Throughout the house, the effect is soft and warm, clean and cozy. Simple and, most of all, peaceful. Guests come from far away, yes, but also from down the street for staycations in a Raleigh oasis.

“We took a lot of care with sound,” Alvarez says. “We didn’t want a creaky bed-and-breakfast — we wanted a hotel that just happened to be inside a home. It’s why there’s so much daylight, hardwood floors that will age with time, linen sheets that wrinkle and have a bit of shadow when the light hits them. I really like how the space can be historic but have these little moments of surprise.” 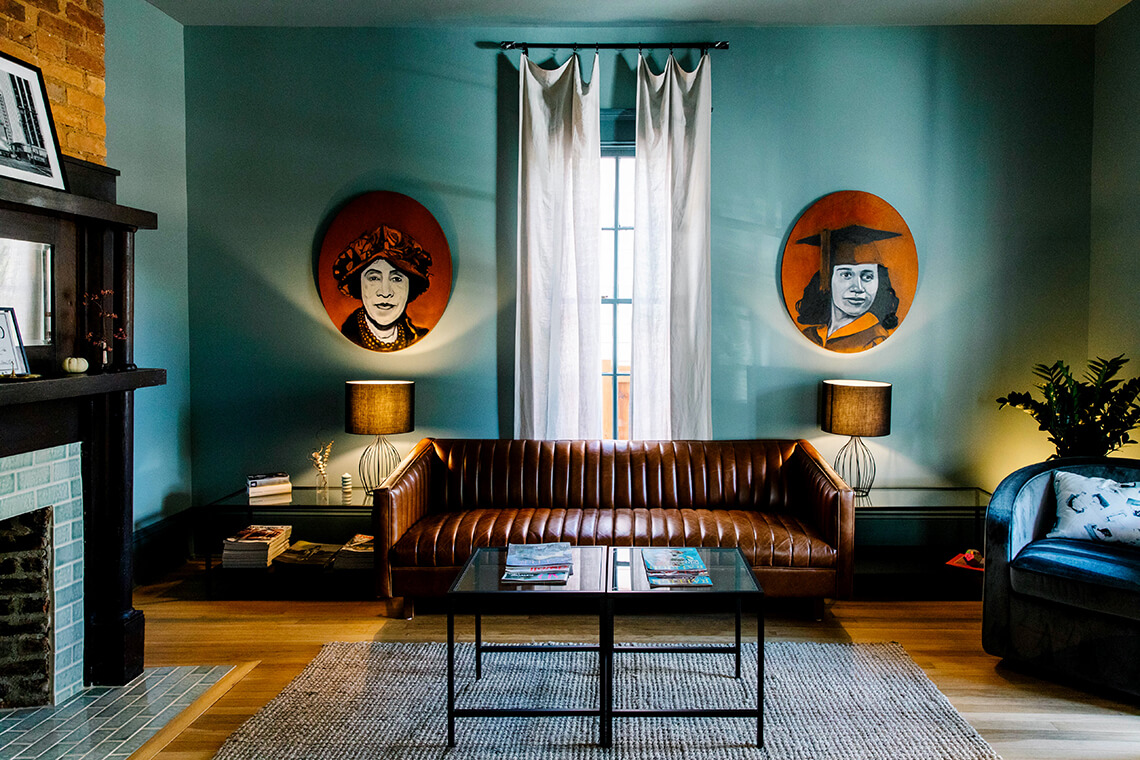 Guests often marvel at the black-and-white picture of Guest House in the middle of a downtown street during its move, which rests over the fireplace in the study. Tomasulo’s favorite details in the house, though, are the portraits of Miss Addie and Miss Irene painted by Durham artist William Paul Thomas, which hang in the front parlor. Like Tomasulo and Alvarez, Thomas made the works of art his own while still honoring the subjects and their history. They’re a celebration of the matriarchs that first made this house a home.