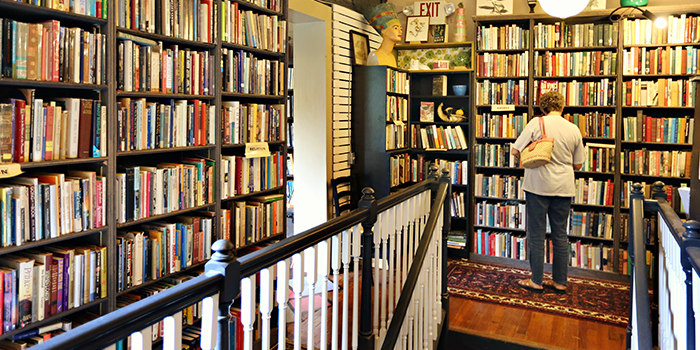 Since 1985, City Lights has made its mission to “share the literature of the Southern Appalachian region with the world, and the world of good books with our community.” Chris Wilcox, who has owned the store since 2010, maintains a special section devoted to Appalachian reads on the shop’s website. Below, he and his staff members share some of their favorite picks.

Moon Women by Pamela Duncan
Pam Duncan will warm up any room and cast a wide quilt of stories and smiles upon any stranger, bringing them in close ever so quickly. Her stories are known for their keen sense of dialect and home-style complexity. Duncan writes of real folks. Home folks. Moon Women pulls three generations of women together with the weight and thoughtfulness of secrets revealed as families expand.Serena by Ron Rash
Rash’s masterpiece comes to the big screen this year. Although the style is reminiscent of Cormac McCarthy’s realism, there are shades of the magical in “the sight” possessed by the character Mrs. Galloway, and in the encounters with animals throughout the book. This is a tremendously fun read, and yet more than a little disquieting.A Land More Kind Than Home by Wiley Cash
Set in Madison County, this strong debut novel tells the story of a young, mute boy mysteriously killed during a sermon at a notoriously controversial church. In the wake of the murder, a divided community is revealed and a corrupt pastor is exposed. Told from the perspectives of several well-crafted characters, Cash’s beautifully written debut novel shows the dangers blind faith can have on not only a family, but on an entire community.

What I Came to Tell You by Tommy Hays
This little novel has a huge heart. If you’re a reader between the ages of 10 and 110, read this book! You’ll experience heartbreak and joy as 12-year-old Grover tries to navigate a life turned upside down by the death of his mother. Creativity and a close-knit community in Asheville help him get through tough days with too many feelings — and Grover hates feelings.

Descent by Kathryn Stripling Byer
This fine collection from North Carolina’s former poet laureate charts her life so far: from coming-of-age in south Georgia to an adulthood spent in the mountains of southwestern North Carolina. Byer’s debut collection, Girl in the Midst of Harvest, was recently reprinted.

Permanent Camp by George Ellison
An inveterate naturalist and student of the southern Appalachians, George Ellison returns to his roots as a poet after having compiled an impressive array of prose works. As with many of his previous titles, including Blue Ridge Nature JournalM/em> and Mountain Passages, Permanent Camp is made visually stunning by the accompanying watercolors and pen-and-ink washes of Ellison’s wife, Elizabeth. The poems included in this collection range from crystalline haiku to longer narrative pieces, which spring from epigrams as thoughtful responses to the works of other writers who have also roamed and loved these mountains.

The Girls of Atomic City: The Untold Story of the Women Who Helped Win World War II by Denise Kiernan
A fascinating look at the Manhattan Project as it unfolded in Oak Ridge, Tennessee, a k a The Clinton Engineer Works, just over the crest of the Appalachians from Sylva. This well-researched history provides fresh perspectives on the tense period late in the war when thousands of young women and men from myriad backgrounds pitched in at the vast plants to help build the atomic bomb.

Mason Jars in the Flood by Gary Carden
This wonderful collection of 29 short stories and three poems is something of a change for storyteller and playwright Carden. In his introduction, Carden implies that he struggled to move his stories from a lifetime of performance to the published page with no live audience to engage. Reading these stories, one would be hard-pressed to find evidence of any struggle; the transition from storyteller’s stage to written word is seamless. Readers will get a distinct impression of Carden’s voice with its implicit, often deadpan, humor, even as it tells a few grim tales. The first section of the book comprises the semi-autobiographical “Harley Stories.” In the first of these, “Mason Jars in the Flood,” young Harley sends notes in his grandmother’s canning jars swirling off into the waters of a branch in Rhodes Cove during the flood of 1940. Carden says this is a metaphor for this book, in which he sends his stories off to unknown readers. Readers are in for a real treat.

The Fountainhead’s name, meaning “the original source of something,” is both a tribute to Moby-Dick and a nod to the authors whose books are sold in the shop. Owner and manager Valerie Welbourn spends a lot of one-on-one time with her customers, guiding them to mountain classics new and old.

Farewell, I’m Bound to Leave You by Fred Chappell
Under the category of “modern classic Appalachian books you may have missed,” this novel captures the essence of Appalachian family lore and its important place in our culture.The Middle of the Air by Ken Butcher
Set mainly in Hendersonville, The Middle of the Air also takes you deep into the Blue Ridge Mountains and the Appalachian Trail. It is contemporary, quirky, and fun. This is a big favorite of my customers, and they keep asking me when Butcher’s next novel is coming out.The Buryin’ Barry Mysteries by Mark de Castrique
This lovely series takes place in the mountains of western North Carolina. The books are mysteries, but they also deal with other human-interest issues, like taking care of a parent with Alzheimer’s. These were some of the first books I read where I felt the author captured “mountain culture” without stereotyping mountain folks as all-wise — or the alternative: all-ignorant.Under the Skin by Vicki Lane
Vicki Lane’s latest book in the Elizabeth Goodweather mystery series takes place on a farm in the Great Smoky Mountains. The books in this series are well-written and always tie in some Appalachian history or lore or both. They’re entertaining and edifying.

Miss Julia’s Marvelous Makeover by Ann B. Ross
The 15th installment in the Miss Julia series once again captures the intricacies of small-town Southern life in the mountains. The series is particularly set in “Abbottsville,” which, the books tell us, is near Asheville. (Abbottsville is Hendersonville, actually, although not exactly.) The books in the Miss Julia series are far and away the best-selling ones in our store.

The Second Bud by Martha Ezzard
This nonfiction book takes place in Tiger Mountain, Georgia, which is on the North Carolina state line. Lovely, honest, and funny writing about making the switch from being in high-powered careers to farming family land.

The Gathering Place by Johnnie Sue Myers
“Groundhog needs to be skinned and the glands from the front legs have to be removed …” This sentence appears on page 2 of Myers’s cookbook, and it’s a clue as to why she was featured on “Bizarre Foods with Andrew Zimmern.” This book has traditional Cherokee dishes, which overlap quite a bit with southern Appalachian cooking, as the access to food sources is the same. Very interesting, and actually lots of good recipes.

A History of North Carolina Wine by Alexia Jones Helsley
I think the title says it all.