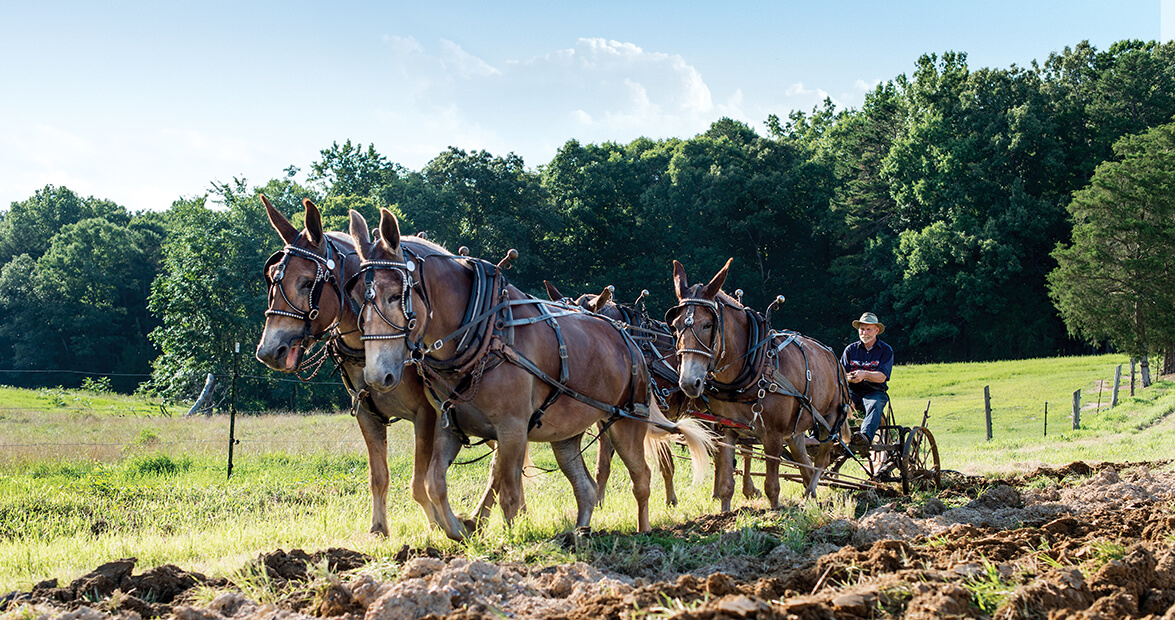 In a small pine forest in the shadow of Research Triangle Park’s sleek temples of innovation, four mules lie buried in an unmarked cemetery. The graveyard isn’t easy to find, even with GPS coordinates. But part of the magic is stumbling through briars and thickets and happening upon their hidden chapel in the woods. There, among the twisty Carolina jessamine vines, are the sturdy granite tombstones engraved clear as day: “Maud. Brown mule. Very gentle,” “Kate. Steel gray mule. Very intelligent,” “Lulu. Bay mule. Very sweet,” “Rose. Black mule. Very good.”

No doubt some long-gone farmer’s higgledy-piggledy expression of devotion: Lulu in the middle, Rose over there. Maud is buried a little to the right. Kate’s nearby. It’s easy to imagine their tails swatting flies off each other’s backs. They lived between 1902 and 1946, and here, less than a mile from the nearest Starbucks, they’ll rest for however many decades to come. Months, maybe even years, must go by without a visitor to this sisterhood of mules.

Growing up, it was important in my family to know something of mules. My grandfather’s stories about plowing fields and riding mule wagons suggested that we came from resilient stock — comforting lore in our modern lives. This cemetery is, too. It’s like a forest mirage, a vision of North Carolina’s agrarian past appearing at the very heart of its high-tech present.

There was once a time when you’d never have to explain why mules were loved like family in North Carolina, much less what they were. But in the span of three generations, that knowledge has disappeared as surely as the furrows they plowed. So, a primer: Mules are the offspring of a horse and a donkey, most often a female horse and a male donkey. They’re considered the world’s oldest hybrid, first appearing 4,000 years ago in Turkey. They’ve got all the appropriate parts but an odd number of chromosomes, which means that except in very rare instances, they can’t reproduce.

What might be an embarrassing snag for some species is for mules a point of pride. It’s their robust combination of inherited traits that makes them so spectacular — the survival instinct of a donkey and the superior ancestry of a horse. Hybrid vigor at its best. Intelligent, sure-footed, hardy, and discerning. Even Charles Darwin considered the mule a work of art. He wrote in his journal, “That the offspring of the horse and the ass should possess more reason, memory, obstinacy, social affection, powers of muscular endurance, and length of life, than either of its parents, seems to indicate that art has here outdone nature.” 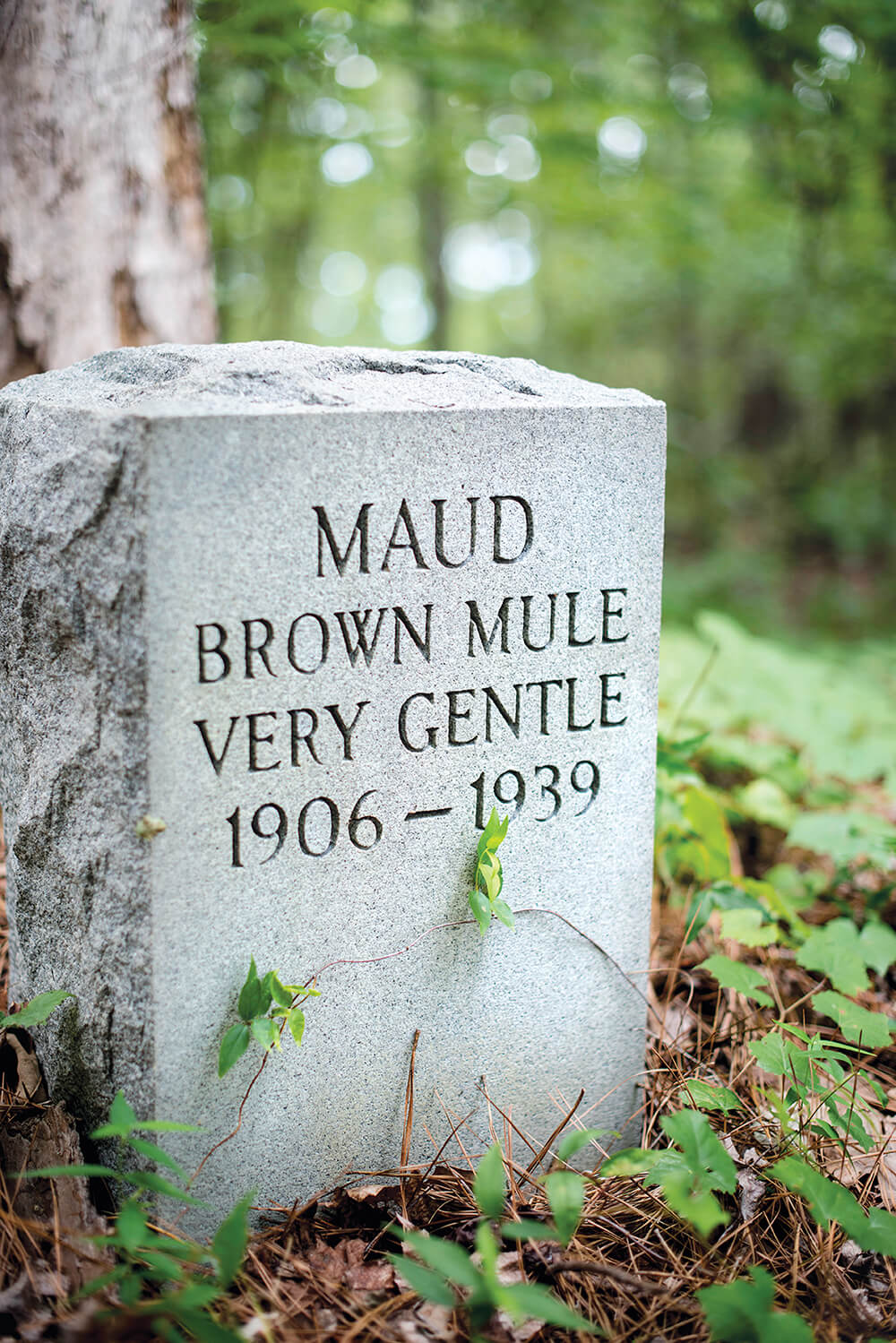 Fabius Page’s mules are buried in an unmarked cemetery in what was once Nelson, a small town near Research Triangle Park. photograph by Lissa Gotwals

Lofty language, sure, for an animal more commonly remembered as hardheaded and bossy. As William Faulkner wrote of the mule, “He will labor ten years patiently for the privilege to kick you once.” And yet, there was a time when farmers wouldn’t have had it any other way. By the 1920s, half of all North Carolinians lived on farms, and poverty was so pervasive that many didn’t even notice when the Great Depression began. A mule was perhaps the best investment one could make. It might treat you like a fool until you earned its trust, but after that, it would work twice as hard as a horse on half the feed. And it would live longer, too. It would carry you to town on Saturday, take your family to church on Sunday, and didn’t care for fancy oats; briars would do. The perfect partner when times were tough. As one mule owner I know likes to say, “Mules don’t like prosperity.”

Of those who had a mule, almost everyone had a good mule story. Mule lore is so thick in Southern literature that a University of North Carolina English professor published a famous paper in which he declared that for fiction to be classified as Southern, it must feature a dead mule.

Faulkner kept a painting of a mule in his study for good reason: Mules symbolize the kind of character and perseverance that farm life requires. A mule is only as good as its owner, they say. And most everyone loved their mule, even when it was aggravating. My grandfather included: His last words to my dad, just before he died at age 93, were, “Son, ain’t we got a barn full of the finest mules?”

Wayne Hussey’s mules are among the finest in the state. He has ribbons to prove it, though he’s not the type to brag. His 15 acres are tilled by mule and plow, which requires equal parts strength and artistry. “I got four or five tractors, but I like mules,” says 64-year-old Hussey. Leaning on the barnyard fence, he murmurs, “They’re quieter and easier-goin’. ”

He has females, a sisterhood like at the cemetery: Josey, Bonnie, Mabel, Jane, and Pat, a 26-year-old mule who belonged to his daddy. Sixteen hands, 1,400 pounds, all five sorrel-colored, with blonde manes trimmed short. These are draft mules: part donkey, part Belgian horse.

“My daddy didn’t like mules to have a long step,” Hussey says, musing on what he looks for when buying a mule. “I like ’em to match. And I do like to be sure I can rub their ears.” Bonnie looks down her substantial, square snout and pricks her ears forward. They flop when Hussey gives them a rub. 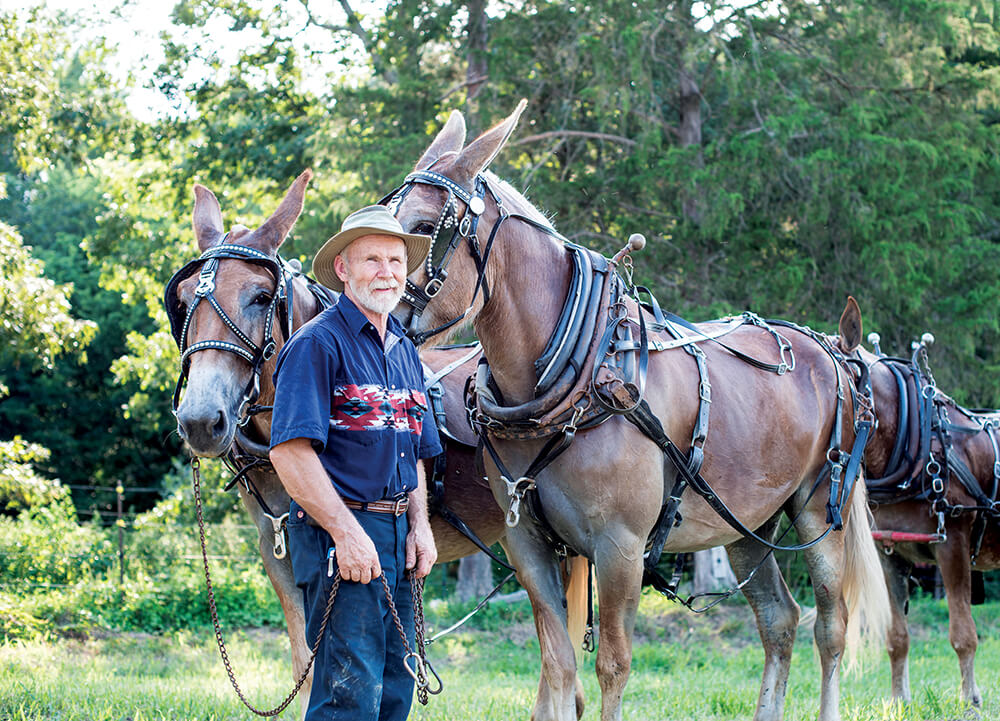 Hussey’s Randolph County farm is a postcard from mule country, where daylilies line ditches and worn-out tobacco barns lean into the wind. Folks slow down when Hussey and his mules are out working their fields. Unlike tractor rows, mule-plowed rows are lumpy, slightly irregular, and utterly beautiful. Across the loamy soil, he calls out directions to his team: “Gee!” and “Haw!” Once, every farm kid in the state knew those words for right and left. It’s strangely reassuring that someone still does.

Between World Wars I and II, as cities grew and big farms swallowed up little farms, mechanization took hold and tractors supplanted mules. North Carolina hung on to mule labor longer than almost any other state, but by 1950 mules were a rare sight in our pastures. Now, their images linger in photographs on the walls of barbecue joints, and in the memories of old-timers like my grandfather.

Hussey’s mules live in both worlds: They’re working animals, no doubt, but they also travel the country as show mules, which is where the present-day mule is in her glory. Pat even marched in the Tournament of Roses Parade. But in September there’s only one place for a mule to be — Johnston County, where Benson’s Mule Days celebrates its 69th anniversary this year.

“Everybody around here’s in love with mules. It’s our heritage, our culture,” says Benson native Paul Dunn, as he feeds Fig Newtons to his mules, Will, Robie, Richard, and Molly. They live in a barn behind his business, Mule City Specialty Feeds. Last week they unlatched the barn door and clip-clopped through Benson, traipsing through people’s yards and munching grass in the local cemetery, before Dunn herded them back home with his pickup.

Just off Main Street, Dunn points out the remnants of an old stable, one of many that once dotted the town. Until the early 1960s, Benson was a mule depot. Each year trains transported hundreds of mules from traders at regional auctions to these stables, where farmers came to pick them up. People still buy mules at auctions — some even do so at their computers. “I bought my mini mules, Richard and Molly, online,” Dunn laughs. “They came from the Ozarks in a U-Haul!”

On the fourth weekend in September, some 50,000 mules and mule lovers descend on Benson, setting up camp in every vacant lot between Main Street and the show arena. Mules walk the streets, ride up to the McDonald’s drive-through, and show off in the ring, leaving behind a pumped-up economy and buckets of spilled oats that in the spring will sprout green shoots in odd places.

Most arrive by truck and trailer. But Hussey prefers to bring his team in a wagon train — a leisurely five-day journey from Seagrove. Dunn calls Hussey “mule royalty,” and says word spreads quickly when he and his prizewinning mules roll into town. Before Hussey takes them into the show ring, he washes off the road dirt with Ivory Dishwashing liquid. “They like it,” he says, reserved as ever. “They might frown if it gets in their face, but most of the time they just drop their head.” Last year, Josey was Grand Champion.

From the wooded cemetery where Kate, Lulu, Rose, and Maud are buried, you can hear the din of rush hour traffic to RTP. It wasn’t always this busy. This was once farmland. Mules, barns, fields, a small community called Nelson. A tobacco farmer named Fabius Haywood Page, his wife, and their five kids lived here in a two-story, tin-roofed farmhouse, porches front and back. A tall, friendly man, Page spent nearly every day of his 89 years on the family farm — from 1889 to 1978 — on land that’s now woods and tombstones.

His mother was a music teacher who filled the house with books. But he had to learn to dodge his father’s mean temper. A friendship with the family’s mules and horses provided solace. When he was 9 years old, he discovered Black Beauty, a heartache of a book narrated by a horse whose bittersweet life experiences moved Page in ways no one would ever quite understand. After reading it, he decided he would never sell a single mule or horse. “I keep them all their life and give them a good burial when they die,” he once told a curious reporter.

And he was true to his word. “He never did buy a tractor,” says Doris Page Smith, who, at 85 years old, is his last surviving child. “I remember those mules. Rose and Kate especially,” she chuckles. “During the winter they would be mostly in the barn. But in the summer he was out all day long in the field with them.”

Cedar Fork Baptist Church is about all that’s left of Nelson. Almost all of the fields are gone. Stirrup Iron Creek, where generations of Page children dipped their toes on hot summer afternoons, spills into a muddy lagoon. A luxury apartment complex, studiously landscaped, occupies the space where the farmhouse once stood.

But Page’s animals are there, tucked in the woods, just out of sight: mules on one side, horses on the other. His was a striking act of kindness for which he expected nothing in return. “I have stipulated in my will,” he told the same reporter in 1956, “that that piece of property on which the graveyard is located can never be sold or traded. So it’ll be there long after I’m gone.”

The fact that no one would likely visit these graves after he was gone makes this final expression of gratitude even more touching. For mules, who have no descendants and whose legacy is tied to a generation of farmers now mostly gone, the cemetery is a monument, a memorial to a time when they mattered.