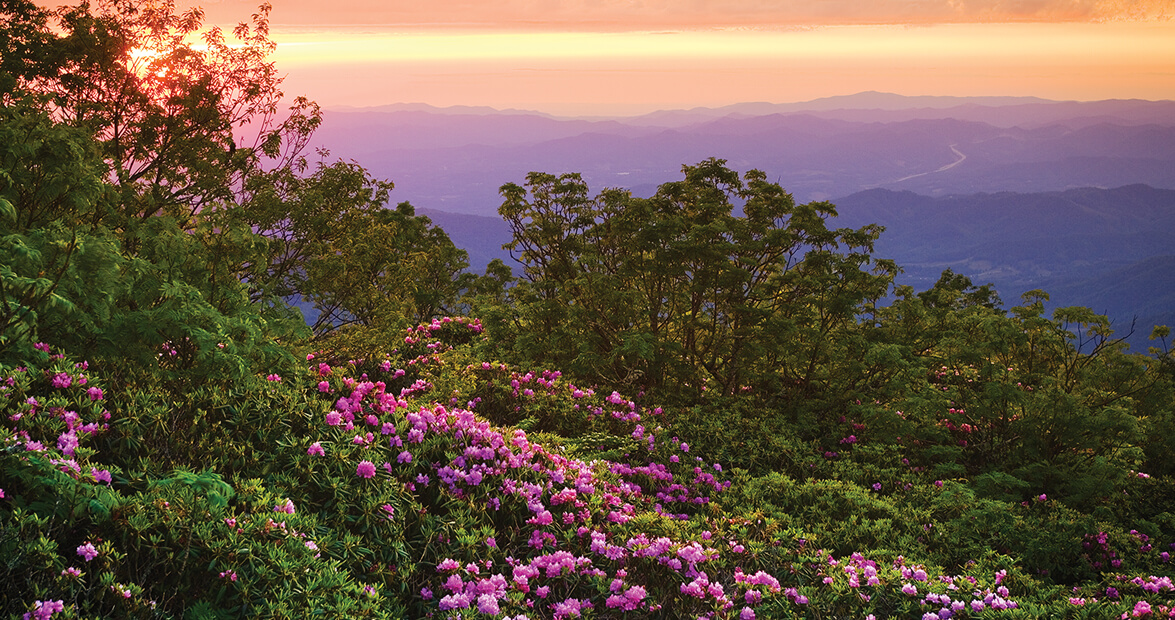 If a rhododendron could speak, imagine what it would say.

Would it talk about the bitter winters when its leaves kink tightly? Might it tell of sunsets viewed from the peaks of the Blue Ridge? Would it crumble under the pressure of producing the picture-
perfect scene every summer? Or in its vanity would it boast and challenge you to find a more breathtaking sight than a hillside of Rhododendron catawbiense in bloom?

The Old World botanists who explored North Carolina’s mountain ridges never found a talking plant. But in the mountain rhododendron, they certainly found a plant that spoke to them.

“I shall never forget so long as I live the day we discovered that plant,” said John Fraser Jr., describing locating this particular variety on his father’s sixth voyage across the Atlantic in 1799. “We had been for a long time traveling among the mountains, and one morning we were ascending to the summit of the Great Roa [Bald Mountain], in the midst of a fog so dense that we could not see further than a yard before us.

“As we reached the top, the fog began to clear away, and the sun to shine out brightly. The first object that attracted our eye, growing among the long grass, was a large quantity of Rhododendron catawbiense in full bloom.”

The plant that endures

Curious explorers still flock to places such as the Craggy Gardens, at Milepost 364 on the Blue Ridge Parkway, to see the Catawba rhododendron that earned Fraser’s adoration. The blooms usually peak in the second to third week of June.

Legend has it that generations ago, the Catawba Indians challenged other tribes to a battle in early summer. They emerged victorious, but so much blood was shed that the rhododendron bloomed red from that day forward.

Chris Ulrey, plant ecologist for the Blue Ridge Parkway, has other explanations for why rhododendron grows so well in western North Carolina.

Since the arrival of European settlers, humans have extensively modified the landscape through logging and clearing. It’s believed Native Americans also may have cleared or burned the balds to improve hunting opportunities, Ulrey says.

Although those actions decimated some plant populations, they weren’t a problem for the rhododendron, which can resprout from the roots or crown after being cleared or burned.

The rock that gives shape to some steep mountain slopes also may hold part of the answer. Through geologic movement, layers of slate were shoved into a more vertical position, making certain slopes prone to rock slides, Ulrey says. Rhododendron is one of the first colonizers to take over those sites.

The evergreen’s leafy boughs choke out smaller plants with its acidity and shade, making it difficult for other flora to challenge its dominance.

Heath balds are believed to be successional, Ulrey says, meaning that trees eventually get established under the rhododendron. Those spots will eventually turn into forests, but that transition could take hundreds of years.

The result is rhododendron thickets growing undisturbed. They become so dense and impenetrable that they’re often called “hells” or “slicks.” Ulrey admits he tires of climbing Mother Nature’s jungle gym. “As a biologist, I’m often off the trail to do some work. … It can be where you’re crawling on your belly. Sometimes you’re up in those shrubs. You can go dozens of feet before you ever touch the ground.”

He’s not the first to accuse the rhododendron of being inhospitable.

Ancient Greek histories relate a story of an army that, upon taking control of a village around 400 B.C., suffered sickness after tasting the honeycombs. Hundreds of them became deathly ill before recovering days later.

The rare illness, known as “mad honey disease,” is said to occur when bees pull nectar from certain toxic rhododendron and laurel.

Modern civilization has few cases to prove the ancient claims. And while some plant experts say the rhododendron also can be fatal to animals, many a gardener will tell you that deer are more than happy to take a munch.

Many admirers have tried — and succeeded — to capture that mountaintop magic for themselves.

Like the collectors of Europe before him, 66-year-old Ray Head has traveled all over the South in search of superior rhododendron seeds. His home in Rutherfordton is filled with notebooks scrawled with directions to obscure forest coordinates where he found his prime specimens.

“They’re just like people,” Head says. “If you find them growing in the wild [in quantities] of 10,000, there will be one that’s just superior to all the rest.”

Head joined the American Rhododendron Society more than 30 years ago. When he started, many members were growing the plant from seed. Today fewer do, he says.

But Head still enjoys playing matchmaker for the flowers: a dab of pollen from this plant, a swab on the pistil of another. If nature blesses the union, a seed capsule develops, and a new creation forms.

In Bakersville, residents have little need for do-it-yourself pollination. Nicknamed “Gateway to Roan Mountain,” the town sits at the edge of the world’s largest natural rhododendron garden.

In 1947, residents of Bakersville teamed up with residents from the community of Roan Mountain, Tennessee, for a festival and beauty pageant centered on their beloved plant.

After sharing the mountain for four years, the towns split the festival into separate events, alternating weekends to take advantage of Roan Mountain’s peak blooms.

In the 1950s and ’60s, the N.C. Rhododendron Queen was a coveted title. Competitions in evening gown, swimsuit, talent, and interview earned the winner a year of ambassadorial duties as an unofficial state spokeswoman.

The crowning took place annually atop Roan Mountain until the summer of 1972 — when the mountain received about two inches of snow.

“We went ahead with the crowning event on Saturday afternoon,” Hensley says. “It was 36 degrees, and none of these women had a winter wrap, and they were freezing to death. They just about rebelled; they were blue around the lips.”

Since then, the crowning has been held off the mountain at the high school gym. But the festival still gets special permission to harvest a small quantity of rhododendron from the mountain to present as a bouquet to the winners.

People always ask Hensley at the end of the festival if he’s ready for a break. No, he replies, it’s time to plan for next year.

“It’s a way of life here,” Hensley says. “If we took it away today, I wouldn’t live here.”

Where to see rhododendron

This article originally appeared under the name “Mountaintop Royalty” in the June 2013 issue.