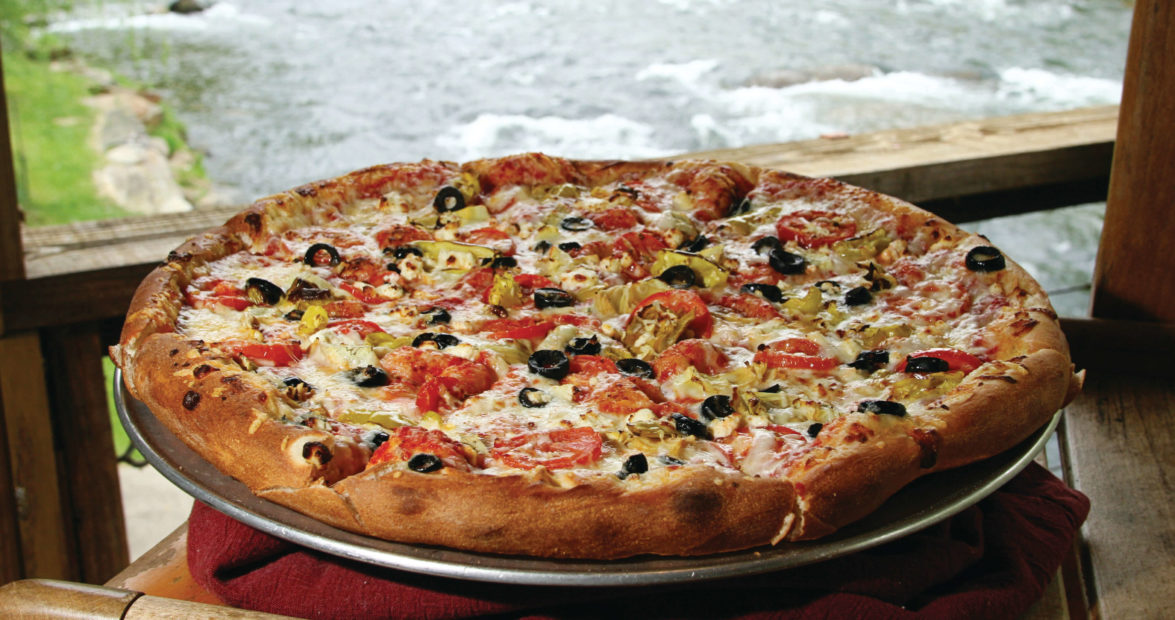 In spring, they arrive on foot, Appalachian Trail hikers determined to reach Maine, or at least a good burger. In summer they arrive by boat, legions of whitewater rafters with appetites honed by adrenaline. In fall, they arrive on two wheels, bikers fresh from the winding 12-mile stretch of U.S. Highway 129 known as “The Tail of the Dragon.” In winter, they arrive by train, tourists in serious need of hot chocolate, riding the Great Smoky Mountains Railroad between the frosted peaks. For nearly 40 years, they’ve been coming here, to River’s End, a restaurant perched along the south bank of the Nantahala River, 12 miles west of Bryson City.

The restaurant was founded in 1972, when husband and wife Payson and Aurelia Kennedy and their business partner, Horace Holden Sr., purchased the property that would become the Nantahala Outdoor Center. Back then, the restaurant was a granola-and-herbal-tea affair, a place where mayflies batted against the screens on warm winter days and the waitstaff occasionally had more hair than expertise. The menu, too, reflected a pointedly grassroots approach: Locally harvested watercress, dandelions, and ramps sometimes graced entrees, and daily menus featured line drawings of local landmarks and personalities on their covers.

Founder Aurelia Kennedy, who served as the River’s End’s first manager, once sponsored a mail-in contest in which people could send their favorite recipes to the restaurant for use, if worthy, on the menu. In 1983, some of those, and many others besides, were gathered together and published as The River Runner’s Cookbook. Now out of print, the book featured wholesome, filling meals that would suit the nutritional needs of trail builders, A.T. hikers, canoeists, fishermen, and generally rugged people. There was the “Sherpa,” a medley of rice, beans, lentils, cheese, and stir-fried vegetables that the Kennedys concocted while trekking in the Himalayan foothills; there was an herb-and-onion bread, dense and aromatic. And there was a white bean chicken chili, the recipe for which came to River’s End courtesy of Joe Huggins, one of NOC’s original workers who still guides for the company on the Pigeon River. (Still faithful to its roots, the chili recently was a “People’s Choice” winner in the fiercely contested Bryson City Chili Cook-Off.)

Even as the ABBA era yielded to the Reagan era, River’s End remained a little remote, a little out there, a welcome stop on a lonesome highway belted by national forest. But by the early 1990s, Nantahala Outdoor Center was growing up, and fast. “During the late 1980s, interest in rafting really took off,” explains Lee Leibfarth, NOC’s current chief operating officer. “So the business went from being this little niche along the Appalachian Trail to becoming the largest whitewater rafting company in the country.” The company has since expanded into a kind of outdoor adventure empire, with satellite locations on the Pigeon, Nolichucky, Chattooga, Ocoee, French Broad, and Cheoah rivers.

Generations of paddlers have come up with NOC as nursemaid to their athletic careers, and for the whitewater-obsessed, jobs at River’s End still exert an undeniable pull. Olympian Chris Ennis once worked here, and so did Zuzana Vanha, a former member of the U.S. National Whitewater Team and longtime River’s End waitress. “She worked split-shifts the whole time she was here,” recalls Ron Mitschke, the restaurant’s manager of nearly five years. “She’d paddle in, wait tables, and then leave to paddle some more.” A clothesline — heavy with PFDs, spray-skirts, and wetsuits left to dry in the sun — hangs just outside the kitchen door, a visual reminder of the amphibious lifestyle shared by many of the restaurant’s staff.

Other restaurant help has come by land. “Awhile back, I hired a guy who just wandered in from the A.T., cold and hungry,” Mitschke says. “He asked me, ‘Do you have any jobs?’ I told him, ‘Well, I could use a dishwasher.’ He stayed two years.”

The whitewater industry has grown up around Nantahala Outdoor Center, making it just one of 20 rafting companies lining this stretch of river today. But despite the competition, NOC manages to escort more than 80,000 rafters down the river each year, a good number of them residents of regional centers such as Atlanta and Nashville, freed from their corporate warrens for a weekend of dampish adventure. More recently, NOC has expanded offerings to include fly-fishing, guided hikes, wilderness first-responder training, and international adventure travel, as well as canoeing and kayaking. But in the final score, appetites may trump even adventure here.

“A few years ago, we realized that we serve more people at our restaurants than we take down the river,” Leibfarth admits. “That was eye-opening.”

On a sparkling early-fall afternoon, a lunchtime crowd gathers at the River’s End. The mountains above are already showing touches of color, the leaves on the black birches warming to yellow and trembling in the stiff breeze. Outside the restaurant, a hiker limps by with a battered frame pack, a wizened fellow who looks as if he’s been on the trail for years. A group of bikers on Harleys roars up and dismounts, a few of them undercutting their Easy Rider image by tapping out messages on their Blackberries and iPhones. “Most of them are actually pretty nice,” says Mitschke with a wry grin, from across a table on the restaurant’s expansive porch. “They look tough, but keep in mind — these are people whose motorcycles cost twenty, maybe thirty thousand dollars.” Slightly down-river, the Smoky Mountains Railway screeches to a halt, toots, and opens its doors. Passengers, many of them seniors, disembark wearing Fit-Over sunglasses and themed sweatshirts. They wander the riverside tracks a moment before they, too, head for the restaurant.

Inside, the walls are blond wood, the decor whitewater-themed. A fiberglass Olympic canoe commands a side wall, mounted above a brace of black-and-white photos of legendary paddling teams and campfire photos of NOC’s founders. At tables, patrons are tucking into daily specials like eggplant ratatouille and Trout Maybelle, a side of locally raised rainbow trout crusted with pecans and served with a generous lump of honey butter. The menu has echoes of an earlier time, too, including the famous “Sherpa” — in no less than three variations — and the “Wesser Burger,” a half-pound beef patty and trimmings named for Wesser Creek, which joins the Nantahala a quarter-mile west of NOC to form a roiling challenge known as Big Wesser.

A few tables over, a customer in a Harley-Davidson T-shirt looks up to greet the waitress, who has come by to examine his progress on the aptly named “Hungry Hiker,” a burger that conceals fully a pound of ground beef between its buns. (“For the man-sized appetite,” the menu suggests.) “Dang!” he bellows. “That’s the biggest burger I ever ate!”

A breeze ruffles the napkins, and for a moment the atmosphere is blotted by the roar of motorcycles. But before long, things have quieted down, and the river — which just might be the best company of all — tumbles along like it always has, its surface dappled in Monet shades of blue and pink.