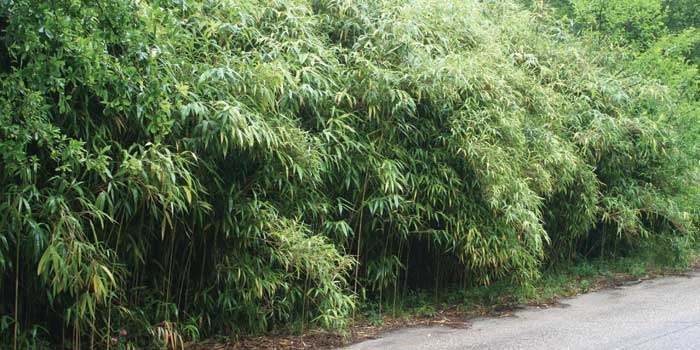 River cane used to work. The tall reeds didn’t just stand along rivers and streams for decoration. The tough but pliable shoots made this native plant a useful material for American Indians. They wove baskets from it, built houses out of it, and crafted blowguns with it.

Those utilitarian works of the past have now become modern crafts and decorations. The double-weave baskets, made by the Cherokee and sturdy enough to carry water from the stream, are now pieces of art. The blowguns, made from dropping hot rocks down inside the reed to burn out the fibers, are artifacts.

When early settlers arrived in North Carolina, they found cane breaks so thick they couldn’t walk through them. Those dense breaks, or stands of cane, aren’t around anymore, but river cane still grows along rivers and swamps. River cane likes to keep its feet wet; its rhizomes stretch easily through the moist soil.

River cane is much more sparse than it used to be, says Mike Schafale, a community ecologist. But it still grows statewide.

Although we now have plastic, wood, and metal materials to work with, we like to keep river cane around. It’s no longer a necessity, but it’s nice.

You can find river cane and other native plants growing in downtown Raleigh. Outside the N.C. Museum of History, the “History of the Harvest” exhibit presents the chronological history of agriculture in North Carolina with six different planting beds. You can trace the evolution of plants in this state from early natives, such as river cane and sassafras, to genetically modified crops, such as water-optimized corn.