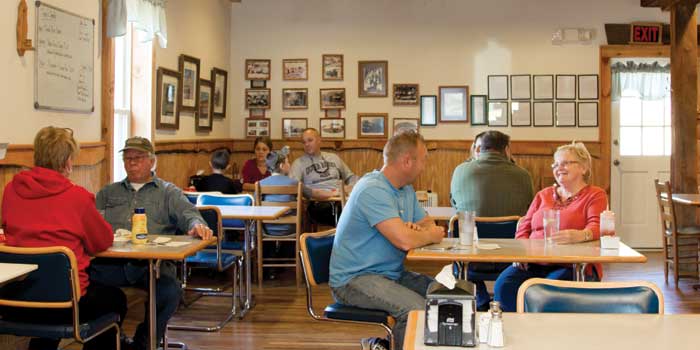 As young boys, they often helped their dad haul loads of fertilizer in and out of this blocky, metal-sheathed building by the South Fork New River. They never imagined that decades later they’d drag out the fertilizer bags for the last time to allow a man from New York to fashion the building into the Riverside Restaurant at Brownwood. When the Yankee dreamer stopped paying the rent, the Coopers became unwitting participants in a culinary experiment still unfolding today.

“That’s what it’s fixed up for, a restaurant,” Ronnie says. “So there wasn’t much use to tear it apart.”

Swing open the screen door and cross the well-worn threshold of the Riverside Restaurant, and you’ll never believe the Coopers were such reluctant purveyors.

“How y’all doin’?” Ronnie asks a couple in the corner, to which there are only two possible responses: “very good” and “so full.”

A sliding barn door opens to the kitchen, making it easy for customers to pop in their heads with compliments.

Creaking stairs lead to the second floor, where line dancers and flat-footers scoot to the country sounds of George Wilson and Friends on Saturdays. Their feet tap over a square of hardwood flooring lighter than the rest, where a chute used to sit for sliding roots and herbs to the bottom floor for balling and hauling.

When the building was constructed in 1918, it was called the R.T. Greer and Company Root and Herb Warehouse.

In that era, rural mountain dwellers relied on trading and foraging, gathering wild cherry bark, beadwood leaves, ginseng — any number of valuable roots, barks, and herbs with medicinal purposes. The roots and herbs were collected, bound, and loaded onto the Virginia Creeper line, whose final stop was about four miles farther north in Todd.

Chef Will Burrell likes the restaurant’s unpretentious nature. After all, you can make a place too pretty, he says.

A former hair-down-his-back musician, Burrell transitioned later in life to crafting four- and five-star restaurants. He uses words like “groovy” and doesn’t mind sharing his two cents about corporate America.

Burrell grew up in South Dakota with 500 chickens, three acres of gardens, and a well-used root cellar. Moving to this sliver of land, where he can wear a chef hat one day and overalls the next, is his idea of perfection.

“Everybody goes back to their roots eventually,” Burrell says.

When Burrell was hired to refocus and lead the kitchen last spring, he was careful to move at a country pace. He kept many Southern classics on the menu — barbecue, hamburger steaks, and fried chicken with coleslaw, green beans, and creamed corn — but added in a few surprises. A Reuben sandwich, grilled salmon, and a lineup of salads and soups weren’t what the Coopers had in mind at first.

“I’m just an old country boy,” Donnie says. “I don’t eat soup in the hot summer. Boy, he made a liar out of me. People just went crazy over his stuff.”

With 34 restaurants under his belt, Burrell came with unbridled confidence. He knew exactly what he wanted to do.

“The bottom line is just serve good food and be friendly,” Burrell says. “It’s the simplest and most complex business there is, the restaurant business. Complex because of the variables, simple because what you’re after is just happy people.”

Those happy people include 89-year-old Buck, Ronnie and Donnie’s father.

The only place Buck drives to is the restaurant, where he stops in most mornings. He has a breakfast special named for him. Buck may be here to enjoy himself these days, but for many years this was the place where he toiled. He purchased the old building in 1946 with a neighbor, launched a fertilizer business, and eventually gained sole ownership.

Each spring for more than 60 years, Buck stacked the building full of fertilizer. Once the farmers got ready to plant — and they all got ready at once — the Coopers couldn’t keep it in stock.

“We always had gardens and tobacco patches we had to work in,” Ronnie says. “If we saw a car coming around the curve, we knew we’d have to stop and run over here.”

Today you’ll still see Ronnie in the field on occasion, delivering a tractor bucket full of watermelons or pumpkins for his beef cattle to munch. But these days, there are fewer and fewer farmers like Ronnie in the fields, which caused the fertilizer building to close its doors in 2008.

The best of it

It was about three years ago that the Coopers found themselves deep in — well, let’s just call it fertilizer — once again. When the former restaurateur left them high and dry, Ronnie and Donnie found a new cook.

In September 2011, that cook shut down the restaurant one Sunday night and never came back for the next shift. The Coopers closed the restaurant until April 2012, when Burrell joined the team. He is the best thing that ever happened to the place, the Coopers say.

In addition to hearty Southern cooking, the Riverside Restaurant offers kayak and tube rentals in the summertime. Visitors float down the same river where generations of Coopers have played and swum for more than 150 years. On spring days, bicyclists and runners gather in the parking lot for races and rides.

The Coopers admit they usually say yes to any decent idea for the place that comes their way. For such an old building, it’s in a constant state of infancy.

“Things change, and you just have to learn to go with it,” Ronnie says. “Make the best of what you’ve got,
I reckon.”

It’s not easy to work at the restaurant and meet all life’s demands. They have rental properties to maintain, yards to mow, hay to cut. The Coopers are still learning every day about this place they’ve known since they were children, but each day gets better and better.

Kellen Moore is a graduate of UNC-Chapel Hill and a reporter at the Watauga Democrat in Boone.