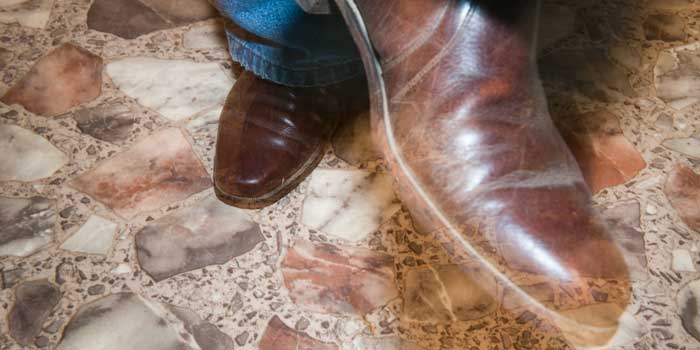 Editor’s note: This story originally appeared in the September 2011 issue.

Robert Dotson, a flatfoot dancer of Sugar Grove, N.C. and recipient of the 1994 North Carolina Folk Heritage Award, passed away January 13, 2015, after a brief illness at the age of 91.

Robert Dotson carries a dance floor with him wherever he goes. It’s a small one, but it allows Dotson to view the entire world as a stage. Dotson, a premier practitioner of Appalachian flatfoot dancing, has shared his talents up and down the East Coast — in New York City, where students told him he talked too slow, and in Mississippi, where they thought he talked a little too fast — but he always returns to the mountain community where he grew up. Here, his neighbors agree that his speech, and his feet, communicate at just the right speed.

Dotson has lived all his life within a half-mile of his family home in Sugar Grove. He grew up at a time when land holdings were large and homes were small. Evenings and weekends were reserved for music and dancing. His parents, who played the guitar and banjo alongside fiddling neighbors, gathered their children into a bedroom when it was their turn to play host to the festivities. Dotson can still vaguely remember listening to the sounds of string music and shuffling feet through thin walls. Story continues below the video.


Keep up if you can as Robert Dotson shows you just how Appalachian flatfoot dancing is done in this exclusive Our State video. Video produced for Our State by Jonathan Weaver.

When he was 10 years old, his parents finally allowed him to join the adults in their merriment, and that’s around the time he became enamored with dancing.

“I come from a family of musicians, but I can hardly play the radio,” he says, laughing. “I chose to be a dancer. I just fell in love with it.”

In flatfoot, dancers keep their feet close to the ground. This how-low-can-you-go style distinguishes it from the loud claps of clogging and the extroverted, bent-leg thrusts of buck dancing. Flatfooting is the first dance Dotson ever learned and the one he loves above all others. “If you get to making a lot of noise, you’re not a flatfooter,” he says. “The lighter you are on your feet, the better you are.”

Dotson floats on his feet, according to the trophies that line his shelves, and his motivation for getting good at it wasn’t altogether self-serving. When he was a kid, it was a social necessity to dance without disrupting others. Robert and his family have added on to his current house, but he remembers when the modest, whitewash structure was half the size it is now. He settles into a couch in his cozy, wood-paneled living room and throws a hand into the air. “This place got filled with dancers when I was a kid,” he says.

Dotson remembers dancers rubbing up against strings along with fiddlers’ rosined bows at the most crowded gatherings. This proximity of musicians and dancers characterized many tiny rooms across the region, especially in the harsh winter months. And that closeness is, perhaps, one of the reasons quiet, flatfoot dancing became popular in the western part of the state. “If you got to making too much racket, somebody’d say, ‘Hazel! Bill! Robert!’ or whatever your name was, ‘You’re not dancing as much as stomping!’” Dotson says. “See, if it got too loud and they couldn’t hear the music, they’d call on you.”

When people watch Dotson dance, they praise his form. But he warns, “Don’t ever think you’re better than everybody. There’s always somebody around the corner that’s better than you.” But then he pauses. His eyes roll toward a wooden cabinet that houses dozens of dance competition awards he doesn’t display, for fear of being too showy.

“Nobody’s ever beat me at flatfooting,” he says. “But I know there’s somebody out there, somewhere, that could.”

Begins with a shuffle

Dotson practices his dancing every day.

“When I get a little lonely or a little bored, I go and put in a tape,” he says. “When you clean house, you can always put a little rhythm in it. You don’t have to keep a sour face. You’ve got to do what makes you happy, and dancing is what does it for me.”

He disappears into a utility room where worn overalls hang from wall hooks. Soon, his dining room reverberates with the sound of old-time string music. When he returns, wafts of cologne that smell of fresh-cut pine trail behind him. It’s dancing time.

His shined, dark brown, leather boots begin to shuffle against a Formica floor. Dotson explains that the key to flatfooting is getting in time with the music. He immediately falls into a natural rhythm. His feet move as if tethered to the floor by tacky chewing gum.

His arms are raised to his waist, and they bob up and down like a puppeteer’s moving a marionette.

“Now, you can’t be stiff when you do flatfoot,” he says. “You’ve gotta relax. Your body’s got the rhythm. You’ve just gotta follow it.”

“I’m shuffling,” he announces. “I learned that from my momma and daddy.”

He slowly begins to glide across the floor, backing up as if he’s going to slide right through the doorway and into the next room. As he moves, he throws in a hint of the shuffle he learned more than 70 years ago. His boots click the floor, but the sound is minimal.

The music fades. Dotson slows his feet, but he rocks a bit as he talks. He moves over to look out a kitchen window and points to a small cabin perched on an embankment above the Watauga River.

“I built that place myself just for dancing,” he says. “People used to come from all over to dance in there. We’d start on Saturday and quit on Sunday.”

Once, when the cabin was first built, more than 25 years ago, Dotson received a call from a dance troupe in New York that had heard about his mastery of old-time solo flatfooting. They wanted to come watch him in hopes of picking up some of his airy moves. He remembers his late wife, Myrtle — a dancer who was honored alongside Dotson as a North Carolina Folk Heritage Award recipient in 1994 — calling down to him at the cabin on behalf of the troupe. He was caught off guard and immediately agreed to let them come. “Later, I got nervous and said, ‘Myrtle, I don’t know who those people are. They might do us harm!’” he says.

The group had about a dozen people, and they were, thankfully, a kind bunch. The dancers stayed in the cabin’s bunk loft for three nights. They danced every day and every night. “Sometimes, I thought the building might fall from all the carrying on,” Dotson says. The troupe went on to become Footworks, a nationally recognized percussive dance company, and Dotson is still friends with one of the original members.

Dotson steps onto his front porch to revel in some mountain sunshine. He’s also on the lookout. A nephew who’s interested in continuing the family’s flatfoot tradition should be showing up soon. His visits are a daily ritual that Dotson enjoys. He appreciates people even more than dancing.

There were times when Dotson entertained living somewhere else, maybe even a city, but he didn’t like the idea of not having a yard, and he appreciates the mountainside property that has been in his family for three generations. “I like living in a place where you don’t just go home and shut the door,” he says. “You can walk out and go around and holler at your neighbors here.”

One of Dotson’s closest neighbors is a renter who lives in the cabin he built for dancing. The building’s open interior was sectioned off when one of Dotson’s granddaughters needed a place to live, and it’s been a subdued living space ever since. Still, Dotson’s land remains a haven for flatfooting. The adaptation of his dance studio means that his parties are once again held in the small rooms he remembers from his youth.

Even though his home is larger than it once was, Dotson’s gatherings often spill outside during the summer months. “Lots of people show up with their own boards, and they just throw ’em right out there in the yard,” he says.

He gestures toward the knoll in front of his home, a patch of grass with a view of pastureland and distant mountains. “When you’ve got a board, you can just jump on and get to dancing anywhere,” he says. “You’ve got your own transportation. When the music gets in your feet, you’ve just gotta go.”

With that, Dotson hops on his board, and his feet create an earthbound song all their own. As his shoes slide against the tiny, homemade stage, joy fills his eyes like steam rising in a kettle set to boil. His enthusiasm builds into a frenzy, until it becomes too much, and he hops off. His feet are still, but the wild grin on his face indicates that the day’s dancing has only just begun.

Leigh Ann Henion is a writer and photographer based in western North Carolina. Her essays and articles have appeared in Washington Post Magazine, Smithsonian, Oxford American, Orion, Preservation, and a variety of other publications. She is also a regular contributor to Our State.