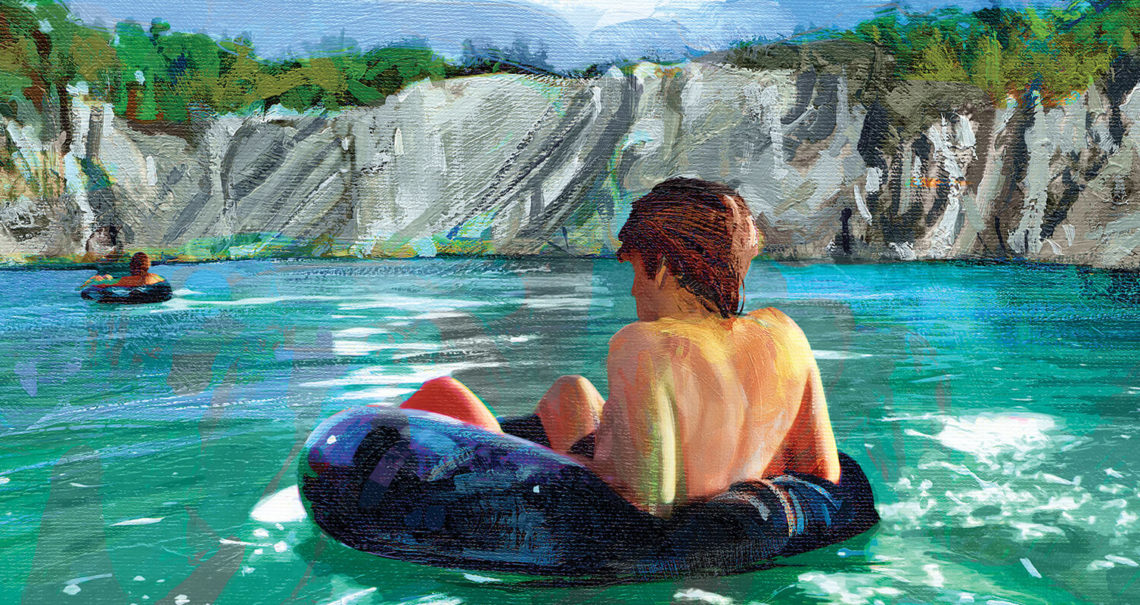 Mama always told the two Jeffs and me, “Don’t go to that rock quarry.” But we went anyway. We were 16 years old, licensed to drive, and deaf to any adult warnings that would prevent us from having fun. Warm days had arrived, and as the sun burned brighter outside dull classroom windows, the long afternoons at Asheboro High School seemed exponentially longer. We were bored, and we were restless. Mama said, “Well, if you go, then don’t dive off of those rocks.” But we did anyway.

It was the summer of 1976, and the old granite rock quarry in the rolling countryside between Ramseur and Coleridge was the place to be if you wanted to play hooky on Fridays. We packed my green Toyota Corolla with a cooler and towels, cranked the windows down, shoved a Led Zeppelin eight-track tape into the console, and cruised out of town on U.S. Highway 64, wailing, “You need coolin’, baby, I’m not foolin’.” In Ramseur, we hung a right onto Coleridge Road, drove past the old mill houses, the big brick Baptist church, and the little country store where we stopped to buy ice for the cooler; over velvety green pillows of pastureland that extended to the horizons; and on toward the tiny community of Parks Crossroads, where we barely came to a standstill at the four-way stop sign. There, we began looking out for the little dirt road that led to the Promised Land: granite cliffs that towered some 60 feet above a turquoise blue swimming hole stretching more than two football fields long.

We weren’t the only ones there when I pulled the car around and parked on the opposite end of the quarry, where the narrow dirt road opened to a small beach at the water’s edge. Tim Yates, with his big mane of long, curly brown hair, was leaning against the fender of his 1968 VW Squareback mounted with a powerful sound system that blared blues-rock music across the crystalline surface. Others were stretched out on huge tractor-tire inner tubes, floating amid the massive rock walls and sipping from cans wrapped in Styrofoam can coolers. I won’t say what any of us were drinking because, at 16, it might have been illegal. But I will say that, in the late ’70s, Friday at the rock quarry was the best party in Randolph County.

Wearing T-shirts, flip-flops, and cut-off jeans, the two Jeffs and I hopped out of the car and ambled around the edge of the quarry, past a rope swing on one side and on to the opposite end, where one of the tallest cliffs formed a natural platform for diving. I was fearless in those days. Standing at a little point that jutted out from the other rocks, I raised both arms high in the air and let out a hearty yell that ricocheted off the granite walls. Then I lunged forward. I could barely make out the wavering guitars from Tim’s sound system as I hurled myself down and splashed into the coldest water I’d ever felt. It took my breath away. We climbed back up and jumped from that cliff over and over until we were exhausted. Eventually, we retreated to inner tubes to relax and stare up at the jagged walls that formed the most beautiful frame you could imagine for the blue Carolina sky and its little puffy clouds. The lyrics of a Fleetwood Mac song warbled across the shimmering surface: “I turned around and the water was closing all around like a glove … through the crystal-like and clear water fountain.” I remember thinking, This must be what total freedom feels like.

The old quarry had been dug at some point in the 1960s or early ’70s, according to Randolph County Manager Hal Johnson. The North Carolina Department of Transportation mined the gravel for highway construction. Tax records show that the 26 acres of land that the quarry sat on belonged to the Ernest Edward Burgess family in 1972, and it seems to have been in that family since the ’20s. It was later owned by John Duvall. But we never thought much about the quarry’s origins, or who owned it, when we swam there during our high school years. We knew that it was illegal to be there, but none of the other stuff mattered. What did matter to us were the legends: We’d heard that bodies had been found in the quarry, and that stolen cars and other hot items were lodged in the rocks at the bottom. I didn’t believe much of it at the time, but as it turns out, some of those stories were true.

“We retrieved several stolen vehicles over the years,” Larry Pugh wrote in a Facebook group about those summers at the quarry. Pugh served as chief of the Ash-Rand Rescue Squad during the 1980s. “There’s a ’65 Chevrolet still in the quarry, and a crushed VW.” He said he once found a bicycle submerged under a rock. “I often wondered if someone had been riding it,” he wrote. In one summer alone, Pugh retrieved 97 pairs of sunglasses, a “small fortune” in aluminum cans stuffed under a floating wooden platform in the middle of the pond, and an unopened gallon of Jack Daniel’s whiskey.

I remember thinking, This must be what total freedom feels like.

The quarry may have been a glorious secret spot for teenagers from the surrounding small towns — Asheboro, Siler City, Coleridge — to swim and to get away from the grind of long, hot school days, but it was not without controversy. Some kids would take risks that landed them in the hospital or worse. Members of motorcycle clubs would show up and swagger about as if they owned the place. Neighbors complained of the loud music and mischief. One person on Facebook remembered an Asheboro High School assistant principal following students to the quarry to bring them back to school. All of this explains why Mama had warned the Jeffs and me not to go to the quarry. But for many of us, going to the quarry was an integral part of teen life in the ’70s. It played an important role in our coming of age, in learning our place in a society that we’d begun to realize wasn’t as simple as it had seemed just a handful of years earlier. We were learning to make choices — some of them good, others not so good.

By the early ’80s, I’d moved on to college at East Carolina University, but when I came home for breaks, I would dutifully visit the rock quarry. Things hadn’t changed much there, but I was changing fast. After graduation, I returned to the area to begin my career as a newspaper reporter. By then, a young tree surgeon from Burlington, Wayne Harris, had bought the 26 acres of quarry and surrounding land for $11,500 and converted it into a membership-only music venue that he called Ramseur Rock Heaven. Local, regional, and even a few national bands played from a stage built high on the hill near the edge of the quarry where I once dove into its waters. The late Henry King, a popular columnist for The Courier-Tribune in Asheboro, called it a “poor man’s country club.” But the atmosphere was different: The quarry no longer felt like something only my friends and I knew about. The more than 200 members would travel from all across the region: Randolph, Guilford, Alamance, and Chatham counties. In 1989, Harris closed Ramseur Rock Heaven. The water had risen considerably higher, and he’d spent more than he paid for the place on a retaining wall and pump. He tried to reopen the quarry as a music park and festival site in 2000, but neighbors opposed it, and the Randolph County Planning Board rejected his request to rezone the area. By then, my journalism career had taken me far away from Randolph County — to New York City, where I wrote for magazines. For me, the old Ramseur rock quarry had become a faded memory of a bygone era.

Today, when I look back on that summer when the two Jeffs and I frequented the quarry, I like to think of one of the last good days. It wasn’t much different from any other day: I was floating on an inner tube, Tim Yates was leaning against the fender of that VW, and the sky was bluer than heaven. And like every afternoon at the quarry back then, the day ended the same way, the same song blasting from the sound system: guitar gods Eric Clapton and Duane Allman churning away on the rock anthem “Layla.” Over time, that song had become a tradition at the quarry. “The tapes that I played the most were The Allman Brothers’ live At Fillmore East, Peter Frampton, Led Zeppelin IV, and B.B. King,” Tim recently recalled. “But the last song that I would always play was ‘Layla’ — that got to be my leaving trademark.”

And one of my dear late mother’s enduring trademarks? “Don’t go to that rock quarry.” But we did anyway.