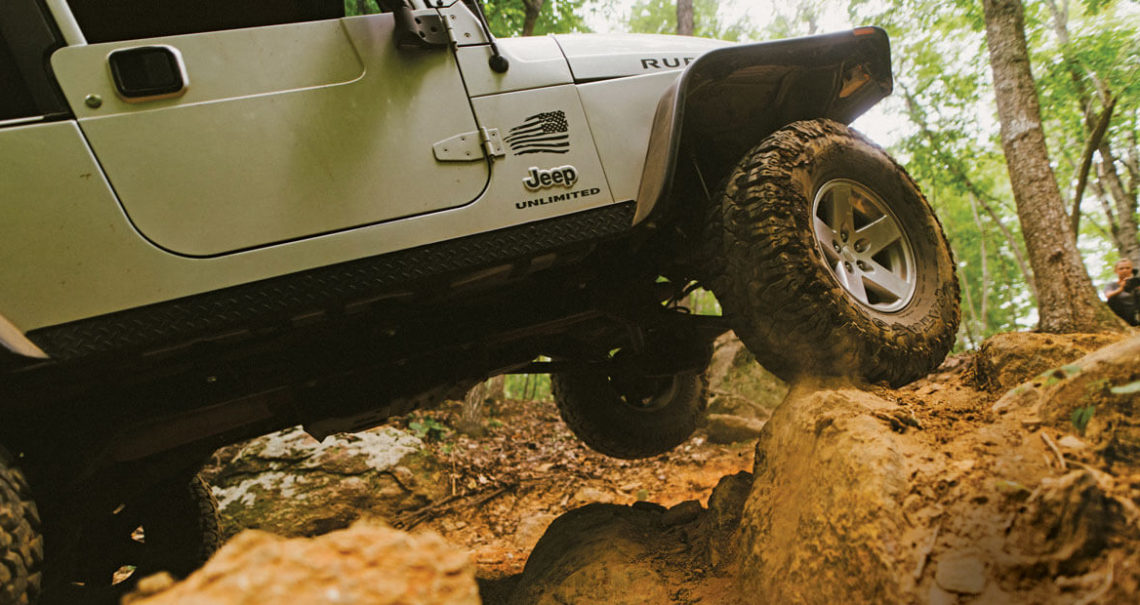 Tommy Gray stands at the top of Scrambler Hill, having just mastered a precarious challenge. Minutes before, he’d maneuvered up the steep, rocky climb in his Jeep Wrangler JKU, and now he’s looking down on a fellow driver who’s having less luck. A Toyota FJ Cruiser has surrendered to the hill, stuck at an angle so steep that the view from the windshield reveals only sky and tree limbs. The vehicle skews to the right, its right rear tire having slipped off the trail. If the driver makes the wrong move, the Cruiser could flip.

Gray rests his hands on his hips and cocks his head. “Bit of a pickle,” he says.

Come across this scene anywhere else, and you’d see flashing lights and first responders. Come across it during a weekend of off-roading in the Uwharrie Mountains, and the most alarm you’ll hear is from Gray, who casually understates the predicament. Even the Cruiser’s driver and his passenger seem more curious than concerned.

It’s hard to pity this group for getting into such messes. After all, the 15 drivers and their passengers signed up for this. They drove to the Uwharries on roads — perfectly paved roads! — to take their vehicles — expensive vehicles! — onto forest trails that thread narrowly between trees, and to traverse boulders and hills that seem more like obstructions than obstacles. It’s also hard to pity a group that’s having so much fun, even in a pickle. In fact, figuring out how to unpickle a situation seems to be the point.

One might guess that the best way to get unstuck on a trail would be to slam on the gas and hope for the best, but that’s exactly the move that could lead to an even more stuck vehicle. The mood here is more refined than that, and the proposed solutions turn this trail into a physics classroom. A certain weight, throttle input, and angle can result in overcoming the same obstacle every time. Make a mistake, and the fault is in your math. The solution will be in your math, too. 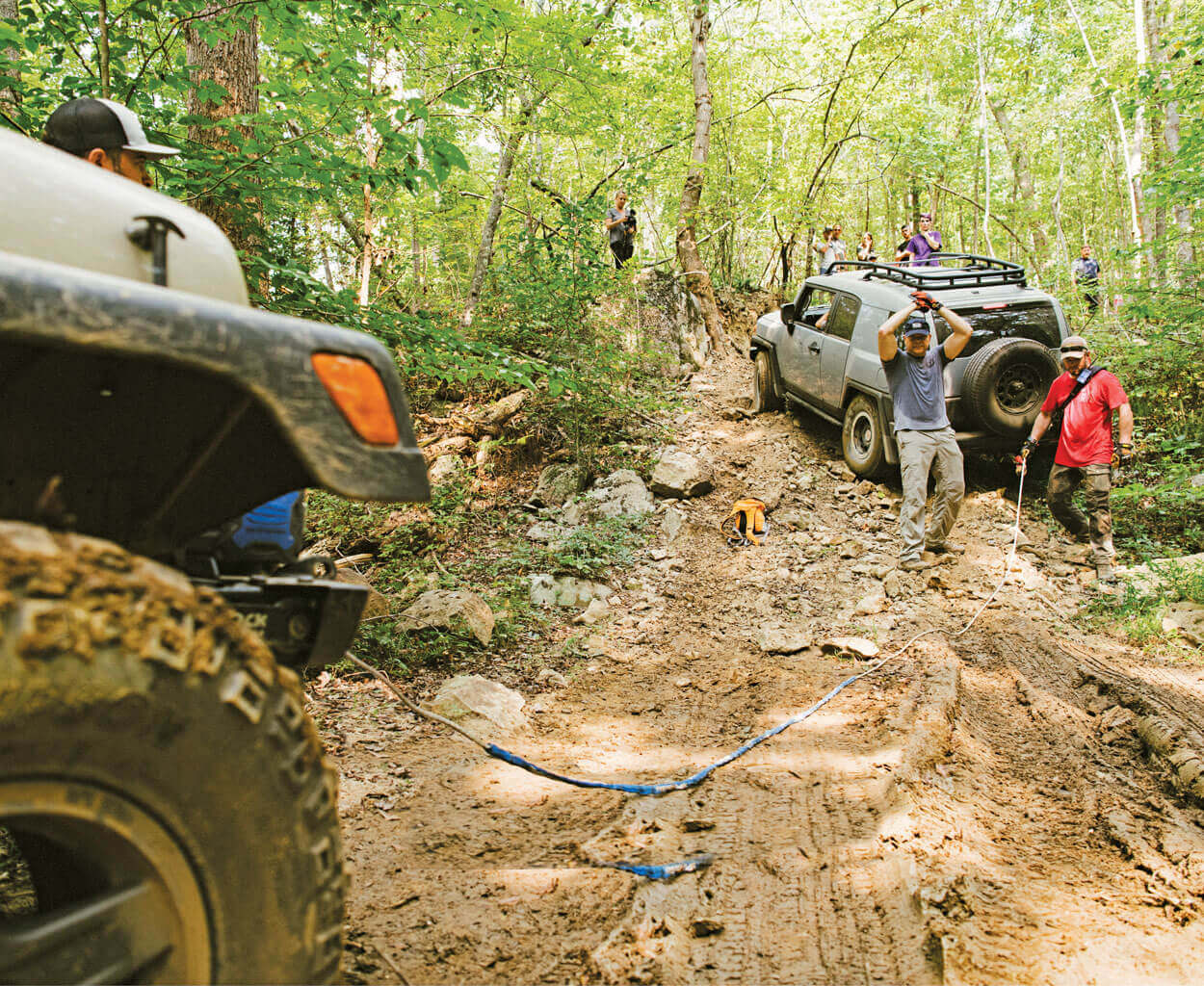 Another member of the group, Izzy Sanchez, walks alongside the trail to alert drivers to obstacles they can’t see, and to execute strategies to free vehicles from such perilous pickles. Sanchez is a mechanical engineer from Charlotte, as well as vice president of the International 4WD Trainers Association (I4WDTA). He approaches off-roading with a calm presence and an analytical mind. For the Cruiser, Sanchez decides to use a winch — a synthetic rope that extends from the front bumper of a carefully placed Jeep Wrangler YJ at the base of the hill to the rear bumper of the Cruiser — to slowly pull it out, inch by inch, until it gains traction. When all four wheels find solid ground, the Cruiser retreats to the bottom of the hill again. Its driver, Joel Estes, asks if he can attempt to scale Scrambler Hill a fourth time. Sanchez smiles, shakes his head no, and directs Estes to a smoother and less steep bypass that rejoins the trail and the group at the top.

“If you don’t get pulled out of something, you’re not trying hard enough,” Estes says with a shrug and a laugh.

The other drivers and their passengers, who’d stopped to help Estes out of his predicament, return to their vehicles to resume the ride. Their speeds rarely surpass 5 miles per hour, but adrenaline still spikes. Vehicles maneuver so closely between trees that the mud on their fenders transfers onto the tree bark. Ahead, there’s always something: a rock scramble, a steep hill. And trees. So many trees. Attention remains sharp. How wide is that opening? How much clearance is underneath? Uwharries off-roading isn’t so much for daredevils as it is for tacticians; it’s three-dimensional Tetris with thousands of dollars — sometimes more than $100,000 — at stake.

More than that, it’s a hell of a ride. 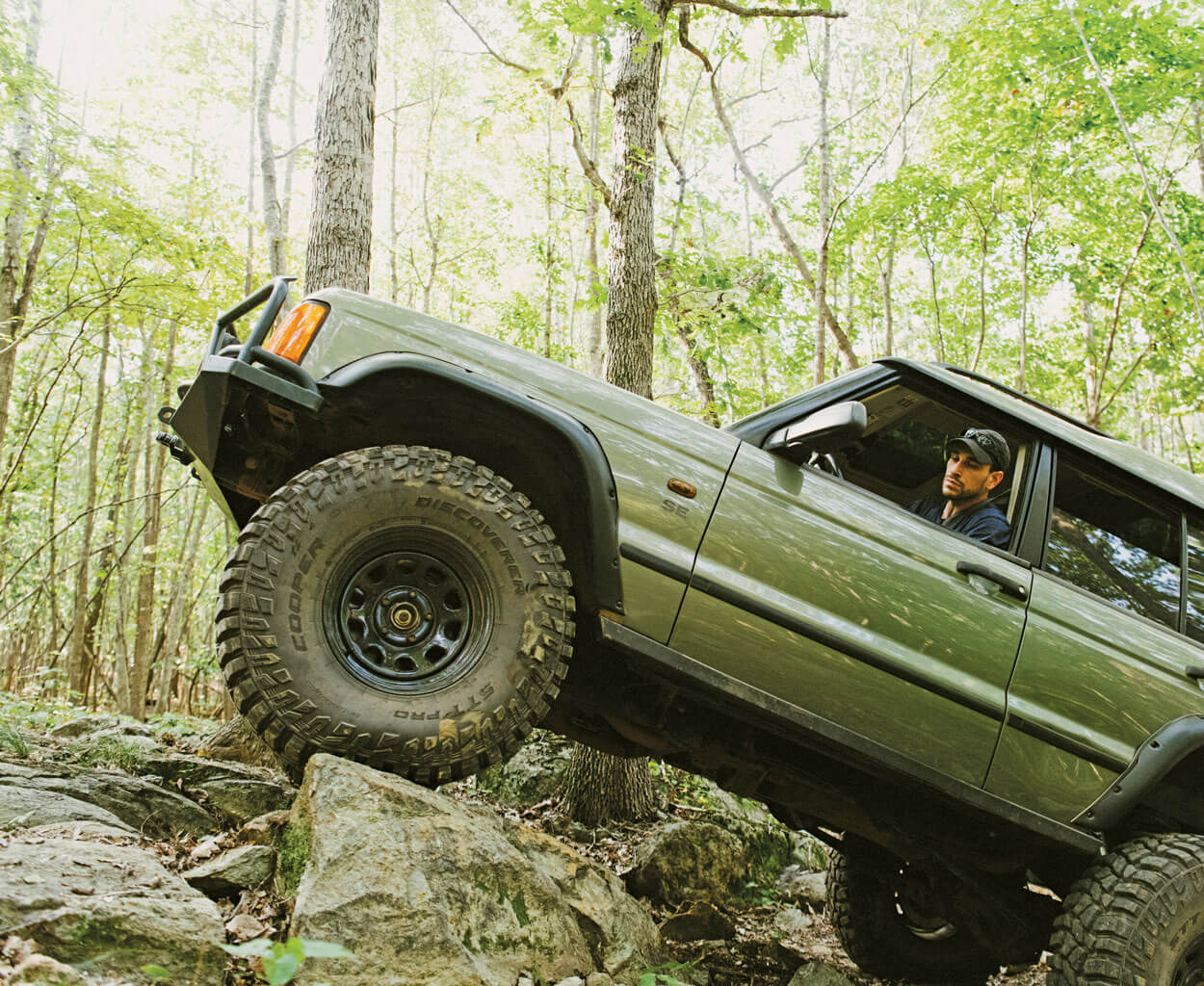 Think of off-roading, and you’ll likely conjure images of a Jeep commercial: tires spinning, vehicles blasting through mud, and nearby woodland creatures scampering off in fear. That’s the problem. Too many people think off-roading is like a Jeep commercial. That style of driving hurts the land and contributes to erosion; it’s the reason public parks are closing their off-roading trails.

The Uwharries are no strangers to erosion. They’re among the oldest mountains in North America, once ancient volcanic peaks rising 20,000 feet — taller than today’s Rocky Mountains. But river erosion wore down those peaks, and now they rise only about 1,000 feet at their tallest — just enough to make this landscape of rivers, lakes, and trails an off-roading playground.

As more off-roading trails close to full-size vehicles elsewhere, drivers have come to the Uwharries for some of the best terrain on the East Coast. But the relationship between off-roaders and the Uwharries has been fraught. For years, some drivers would improvise maneuvers that scarred the land: Can’t tackle an obstacle? Just wheel around it and make your own trail. Stuck? Gun the accelerator and let your tires spin. Got trash? Toss it. Soon, narrow trails grew into dirt highways dotted with litter.

The thing is, the Uwharries hold sacred land filled with the history of the Catawba tribe. When rule-breakers left broken arrowheads and pottery in their tracks, a movement grew: Close the trails, some said. Then a countermovement responded: Off-roading doesn’t have to be this way.

At the center of the debate is Michael Spisak. As district ranger at Uwharrie National Forest, he consults with the North Carolina Historic Preservation Office, the Catawba tribe, and off-roading groups to keep the forest open for pleasure-seekers while ensuring that the trails have minimal impact on cultural resources. “The Uwharrie has some of the highest-density archaeology in the eastern U.S.,” Spisak says. “It’s pretty common to go anywhere and find some type of artifact.”

The trails that the off-roaders use, Spisak says, began in the 1960s as logging roads, built without regard for the archaeological importance of the land. Now, scientists survey the land to locate and protect artifacts, and they adjust trails when necessary. Kodak Rock Trail, a segment of Rocky Mountain Loop Trail, closed permanently after land surveys revealed that it came too close to Native American hunting points and cooking tools. Most off-roading groups understand their legal and ethical responsibility to protect the land, Spisak says, and they know what will happen to the trails if they don’t. In fact, those groups have become partners with the Forest Service in its conservation efforts.

“We’re fighting the image that we’re out here spinning tires and flying through mud.”

The drivers on today’s ride — led by members of I4WDTA and other groups, including Overland Experts, which trains military and humanitarian forces — are among those partners. The ride is affiliated with the larger American Adventurist Appalachian Rendezvous, a weekend event (with a geographic misnomer) that invites enthusiasts to the Uwharries to kayak, mountain bike, and off-road in ways that respect the land.

Other allies include local clubs that host monthly workdays, picking up litter and installing guardrails that force vehicles to stay on the trails. A positive peer pressure has emerged, with experienced drivers unafraid to tell irresponsible newbies to cut it out. “If we’re responsibly taking care of our trails, then groups who aren’t in favor of off-roading will have nothing to complain about,” says Bo Rosa, president of the Triad Jeep Club. “We’re fighting the image that we’re people who are out here spinning tires and flying through mud.”

Earlier in the day, before Tommy Gray and the others hit the trail — before the “pickle” — they stood in the forest shade, listening to Mike Morrison of Overland Experts deliver a safety briefing. “This is a very tight, narrow trail system. Do not stand between a vehicle and a hard point,” Morrison said. “Watch where you step: There are timber rattlers out there, but they will most likely leave you alone.”

The group listened with casual nods — all except for this writer, whose eyes widened at the words “most likely.” Standing near Gray was Steven Hellowell, a 29-year-old from Smithfield who comes to the Uwharries regularly after long workweeks as a project engineer. Beside him was his good friend John Carlisle, also 29, who uses off-roading as a stress reliever after his shifts as a Wake County sheriff’s deputy. 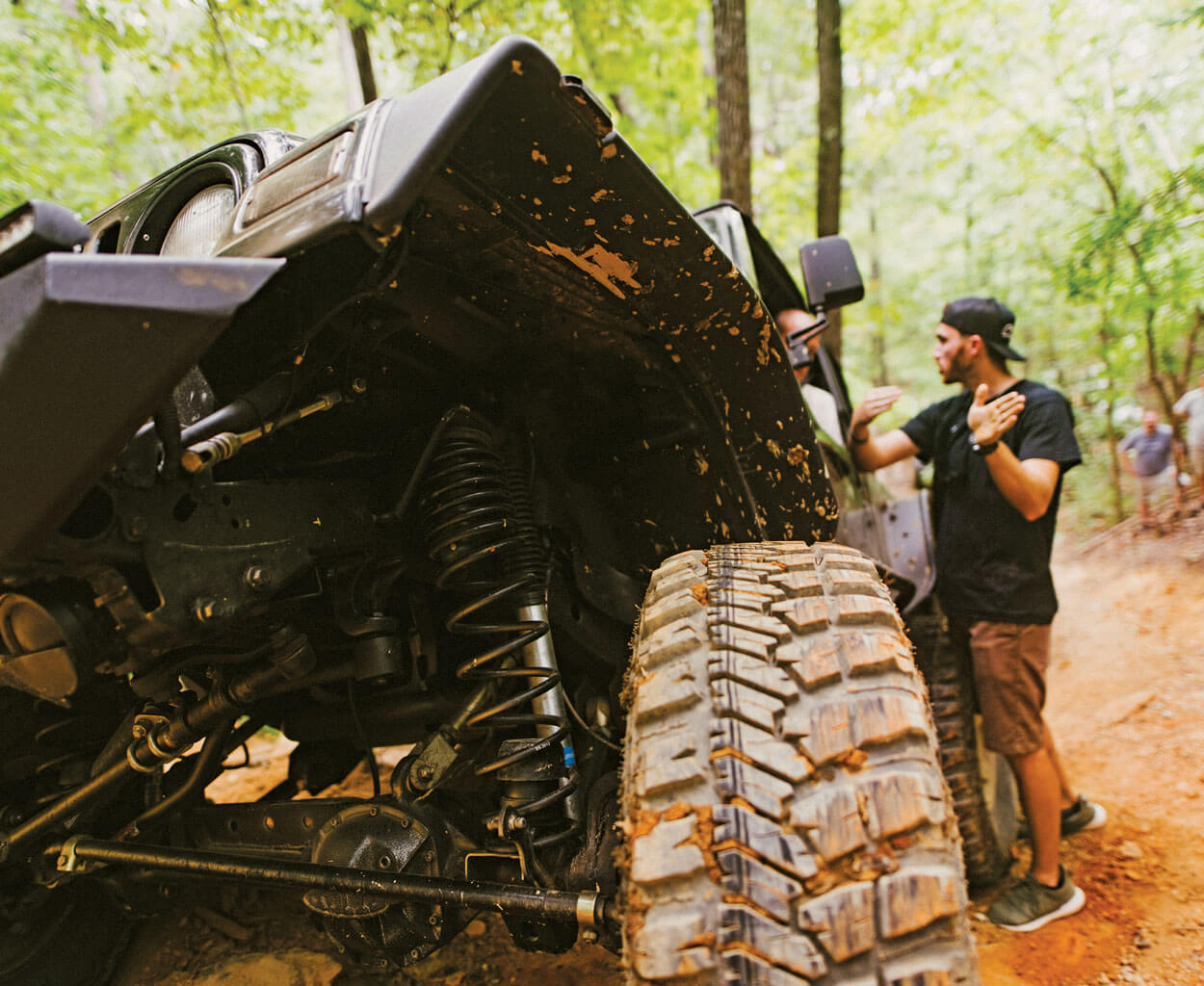 Drivers share their experience with others during four-wheeling events. On Perimeter Hill, a long and hazardous climb, a driver gets pointers on negotiating the challenge. photograph by Andrew Kornylak

More than the thrill and more than the challenge, off-roaders say they seek an escape. They find camaraderie in connecting with their fellow outdoor enthusiasts who flee sterile office environments for a rock scramble in the mountains. Hellowell and Carlisle met while off-roading in the Uwharries seven years ago, and they’ve become more like brothers than friends because of the hours they’ve spent together out here.

“When you get to the top of a hill, you hang out, talk about life, grill up some lunch …” Carlisle says, his words fading into a smile.

At the Eldorado Outpost, the spot where off-roaders pick up supplies and breakfast before a ride, a driver who walks in alone often leaves with a group of new friends. In the forest, there’s an instant camaraderie and an egalitarian vibe that’s hard to find elsewhere. “Out here, CEOs don’t sit any higher than the guy who flips burgers during the week,” Hellowell says. “And if something happens to a vehicle, then the two of them will both be under the Jeep together fixing it.”

At the end of the day, after about three hours of steep hills, mud pits, and several more pickles, the 15 vehicles return to the spot where they first gathered. They wear mud like badges, but otherwise are unscathed. Drivers prepare for the ride home by reinflating tires. They all linger for a while, reminiscing about the day’s biggest obstacles before it’s back to those perfectly paved roads.

“The bug bites hard,” Hellowell says of off-roading in the Uwharries. “The first time is terrifying, and you’re beating the crap out of [a vehicle] that you’re still making payments on. But when you’re driving home and you realize you didn’t bust it up, you just want to go back and do it again.”