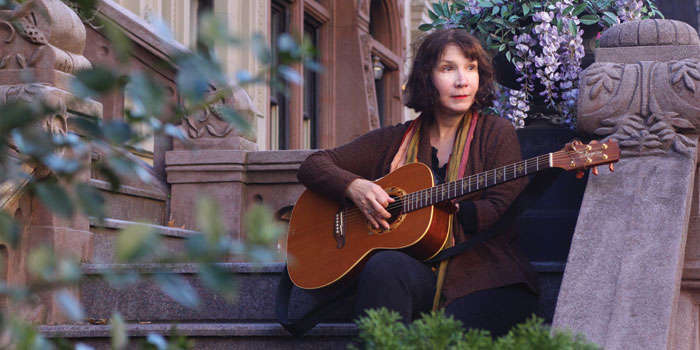 On a Sunday morning inside Price United Methodist Church in Stoneville, Sally Spring sings the old hymn “Touch of God’s Hand” before a small congregation. Smiles appear as Spring’s voice fills the room.

Bert Price, a church member, nods toward Spring. “The power and grace of her voice …” He pauses as his eyes well with tears. “My goodness … she’s something special.”

Spring plays the unadvertised performance at the church with an ad hoc bluegrass band for fun. “I love this music, but it has nothing to do with religion, per se,” she says. “Music is spiritual, in that it is drawn from the soul. I just love to sing. It is all about making that personal connection. A great song is a great song.”

Spring thrives on switching musical gears. She recently returned home to Winston-Salem from a month-long tour, performing her rootsy, folk music at Southwestern clubs and house concerts. Since coming come, she’s played with her electric band at the local club The Garage, an acoustic set at the Blind Tiger in Greensboro, and now gospel music in a tiny, rural church off Horsepasture-Price Road.

“It’s a chance to … draw from new experiences, as music removes barriers between people,” Spring says of her varied venues. “Everybody gets to share that energy, and I get to be in a different place — physically, musically, and emotionally.”

Music has always been the motivating force in Spring’s life. “According to my mother … I was singing before I was talking,” she says. “I woke up singing; I went to bed singing. I sang constantly. I couldn’t stop.”

Spring was born in Palo Alto, California, and moved to Goldsboro as a child. By third grade, she was singing with kids much older than her in the school choir. At age 11, she taught herself to play guitar — remarkable, given that she was born without a left hand. She learned to tune the guitar by ear to chords that allowed her to fret using her arm. She quickly mastered her adapted style — the first example of the determination to overcome all obstacles that now drives her life and career.

“It never occurred to me I couldn’t play guitar, or do anything for that matter,” Spring says. “My father, an inventor, instilled in me at a very early age that everything is possible. All it took to succeed was work and dedication. He was right.”

Spring’s sense of adventure feeds a free spirit. As an adult musician, she lived in Florida; Los Angeles, California; New York City; and Woodstock, New York, before settling back in North Carolina. She mingled with notable musicians, such as Janis Joplin and Mama Cass Elliott, and became friends with Doc Watson.

Wherever she is, she writes and performs songs. Her talent gets people’s attention. Her easygoing personality wins her fans.

“There was never any barrier between Sally and her audience,” says Sonny Thomas, president of the Fiddle & Bow Society in Winston-Salem. “It was that way the first time I saw her many years ago, and it is still that way. Watching her is like watching a friend.”

Spring began recording her music in the mid-1970s. Her first four albums, all engaging, folk-based works, established her talent, but her newest release, Made of Stars, is her creative triumph. The album, which blends folk, pop, rock, and traditional music, continues to gather glowing reviews from fans at home and abroad.

Through the years, people have described Spring’s music in different ways, but she stresses that her music is an extension of who she is and what she’s experienced.

“I love the roots music native to North Carolina,” she says. “I love living here, and I think my music reflects that — the sense of community, the way the leaves sound in the mountains in the fall breeze, the easy pace of living in coastal humidity.

“It all plays into the way I write, perform, and arrange the music I hear in my head. That’s my motivation, not fame or fortune. I knew what I wanted when I started, and I still do.”

Made of Stars by Sally Spring
Singer-songwriter Sally Spring has captivated audiences in her home state of North Carolina and beyond for decades. Her new album, Made Of Stars, takes her folk-pop vision to a new level of creativity.

Spring was either the writer or cowriter on all but three of the disc’s 11 songs. This authorship lends a personal touch to narratives that encapsulate life at various crossroads. “Beautiful Ride” affirms a long-standing romantic union. The title track presents a twilight summation of life. “Boys In The Cornfield,” set during the Civil War, reflects on the human price of war. Some songs validate; others search for illumination or forgiveness. Nothing is trivial.

The nuances of Spring’s voice convey authority and empathy. Every note, every word, carries weight and worth. And the artistic arrangements by Springs’s producer, fellow musician, and husband, Ted Lyons, interpreted by a cast of top musicians, create a distinctive roots-music approach that blurs the boundaries between folk, pop, and Americana.

Winston-Salem resident Ed Bumgardner spent the past 25 years writing about music and culture for The Winston-Salem Journal.