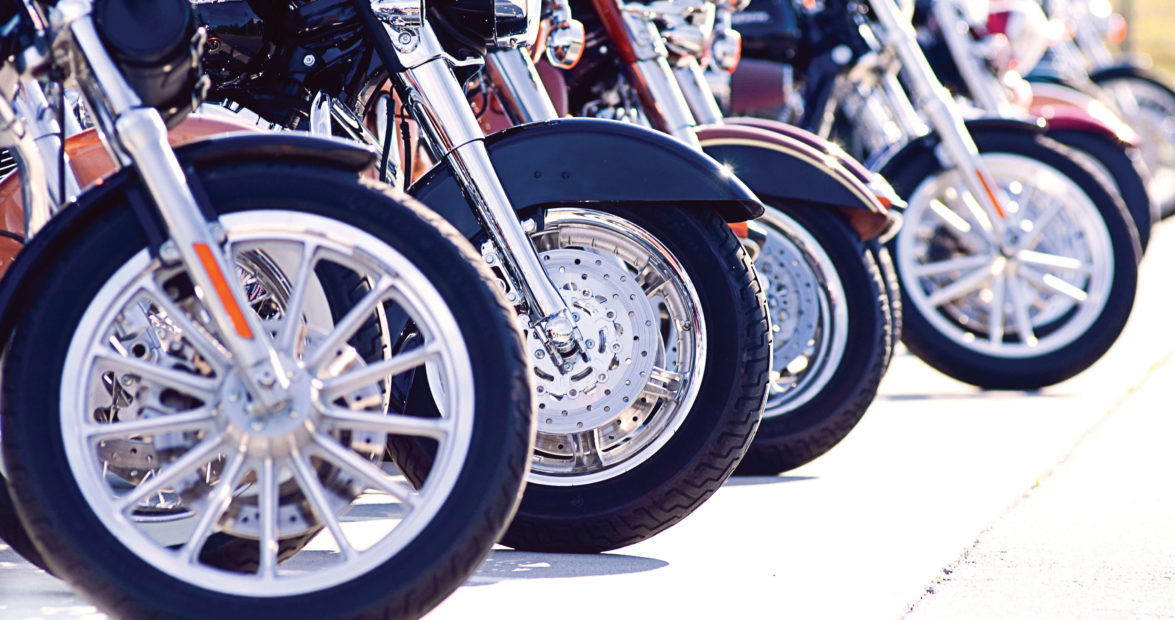 David Henson points to two helmets sitting on the bookcase across from his desk.

One is safety to the max: full cranial coverage, complete with a chin bar and visor that wrap your head in a glossy padded shell.

The other is a half-helmet, also called a beanie. It’s black, thick but squat. It’ll probably preserve your brain in a crash, but not much else.

My mother would pick the first one. Then Henson says, “That one’s probably safer, but you’ll burn up.” He picks up the beanie. “This one’s more comfortable. And you can feel the wind on your face.”

I take the beanie.

I could tell you I’m here for the cause. And it is a good one to raise money to help keep kids safe. But, really, I’m here for the bikes. For the Ultra Classics and Fat Boys, Road Kings and crotch rockets. Shiny beasts lined up outside Tilley Harley-Davidson in Statesville, waiting to roar out in a shimmering line, gunning for the next stop on the Scoot-n-Hoot Poker Run.

Poker runs are exactly what they sound like — a card game on wheels. Riders start forming lines around registration tables set up in the parking lot; we pay $20 and collect the first card in our hand. Then, in a pack, we head to the next stop to pick up the second card, and so on, until 100 or so miles and four cards later, we’re comparing hands and collecting prizes.

It’s as much fun as it sounds like it would be.

For me, fear factors into the fun. Yeah, I picked the beanie. But that’s just me posing. I know I’ll be hanging out with the coolest of the cool on this run. I’m talking leather, do-rags, tank tops, and tattoos. I’ve got to do something to bring down my dork quotient. But not far beneath the surface of that barely adequate helmet thrums the brain of a nervous woman. I can’t get past the fact there’s nothing between me and whatever might come crashing my way. People die on these things.

“Life is dangerous,” ride captain David Pruitt tells me. “We are all going to leave this world.”

I suppose it might as well be while you’re cruising down the road among friends, zipping past the landscape in a blur. But I doubt Pruitt, 55, a retired police captain, will die on the road. Dressed in a bright orange vest and sensible when it comes to speed and intersections, he’s all about the safety, which is the reason he’s the leader of this pack and the person I’m riding with.

For the next three hours or so, the bikes, hot rods, and a handful of family cars along for the ride snake their way along 100 miles of country roads and small-town main streets. At the final stop, Hooters in Mooresville, the victors collect their winnings and bragging rights. But that’s not what the riders come for, really.

“It’s called freedom,” says Pam Williams, her glittery blue T-shirt and pink lipstick glinting in the morning sun. The 46-year-old housewife started riding four years ago when her husband bought a motorcycle. Not content to sit behind him, she got her own. “I wanted to be in control.”

Now when she gets the chance, she rides with her kids — daughter Amber Stowers and son Jonathan Stowers and his wife, Nikki. “This is the best way for us to get together and leave everything behind.”

Weighing only 92 pounds, 19-year-old Amber smiles at the fact that she gets more than a few double-takes when she pulls in on her 600-pound Sportster. Like mother, like daughter: “I just like the freedom; it’s an awesome feeling.”

Round up a herd the size of this one, and you’ve just taken awesome to a whole new level. One by one, the machines come to life. Before the bikes start to roll, riders rev their engines. The collective growl sounds angry, dangerous. I wonder: Are the vibrations coming from the bike or me?

I say I’d never get my own bike, but on this day I’m tempted. The weather is perfect, sunny and in the 70s. Slicing through the air at 55 miles per hour, the wind pushing against my face and arms, I feel powerful, invincible. Brave, even. And because local law enforcement along the way is providing escorts, we fly along, unrestrained by stop signs and traffic lights.

The run is a good mix of roads. Early on, we move away from the urban clutter and pick up speed on blacktop curving through the countryside. North Carolina’s mountains and coast tend to get all the glory, but venture onto the Piedmont’s back roads — N.C. Highway 90 taking us northwest into Alexander County or N.C. Highway 10 coursing through Catawba County’s sloping pastures — and the tranquil terrain soothes the frazzled soul. We zig and zag and glide alongside golden fields and thick curtains of blue-green woods that part at the horizon. We gallop full speed toward the foothills.

On a bike, it’s easy to imagine you’re a part of the natural world. No metal or glass separating you from the elements. I get it, why the bikers refer to the people riding in cars as “caged.”

When the thunderous rumble of close to 100 motors charges up a city street, people tend to take notice. The caravan slows down as it moves through business districts, mostly for safety, partly for vanity.

“There are people who spend more time polishing their motorcycles and their classic cars than they do anything else other than working and sleeping,” says David Henson, who started the event six years ago as a fundraiser for Exchange/SCAN of Iredell County. “On the city part of the ride, there’s a lot of people looking, and the oldies like me will try to suck our stomachs in.”

People step out onto porches and pause on sidewalks, looking to see what all the ruckus is about. Eyes wide, most wave. Henson says he’s seen onlookers stand at attention and salute. Basically, it’s a parade on speed.

“It gives you a rush,” says Dana Friesinger, who met her husband on a poker run seven years ago. She loves sailing along the open roads on her Fat Boy, a dazzling hunk of chrome and colors that won “Best Paint” in the 2008 Scoot-n-Hoot.

When traffic pulls over to let the stampede pass, she’s proud to be a part of the collective. “It’s a brotherhood.”

All the motorcycle riders we pass, people who aren’t a part of this run, wave. And it’s a specific wave, like a secret handshake: hand held down by your thigh, first two fingers extended. Before long, I’m waving along with everyone else. Posing.

Reason for the Ride

It’s safe to say that everyone — both the bikers and the caged — who signs up for the Scoot-n-Hoot Poker Run Is here for the fun.

And they come to hang out with people like themselves, to ride for a couple of hours, and to meet up at the end for cold drinks and hot wings and burgers.

But they also come because they believe in the cause. The annual event, which will be held on June 5 this year, raises more than $2,800 for Exchange/SCAN (Stop Child Abuse Now) Child and Parenting Center of Iredell County. Until he retired recently, Henson worked for the organization, giving parents the tools to raise their children in safe and happy homes.

A lot of the faces underneath the helmets and behind the steering wheels first met Henson in his office. Others just know of the good work the center does.

“It would be my opinion that everybody that you see here knows who we are and is here for this very reason,” Henson says. North Carolina, with its varied terrain and good roads, is a biker-friendly state. On this weekend, at least two other poker runs are happening in other parts of the state. Riders have choices.

“They’re not here just because it’s a poker run,” he says. “If they come to this one, it’s because they choose to come to this one. They know it’s about child abuse prevention.”