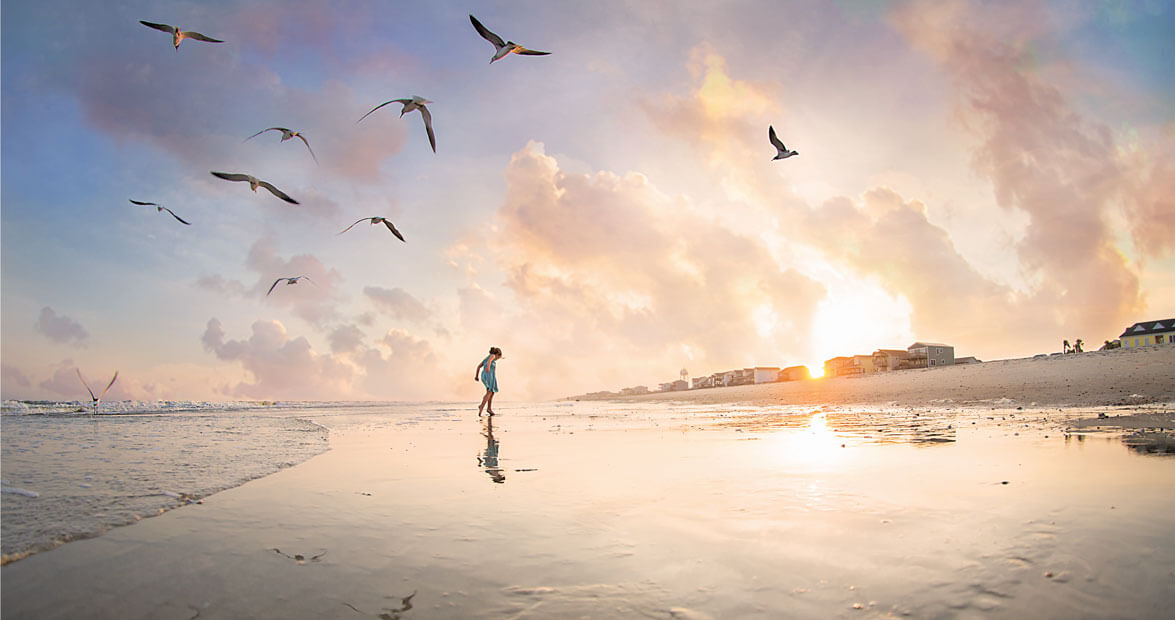 I don’t recall when I first fell under the spell of the sea; it just seems I have always been there, and easily so, growing up an hour inland from the southeastern pocket of North Carolina and the northern tip of South Carolina. We traveled the span of coast from Myrtle Beach to Long Beach (now called Oak Island), but many of my earliest memories are of Holden Beach, a place I still love. Though many things have changed during the 60 years of my life, the view of the ocean and sky, the angle and placement of the pier, the drive through the Green Swamp to get there all remain the same.

Time has always been a funny thing on the island. The wait to cross the drawbridge from the mainland often seemed as long as the entire drive down NC Highway 211 to the coast. Waiting cars jammed with kids and dogs hanging out the windows, coolers and webbed lounge chairs strapped to luggage racks, men and women standing alongside their idling cars, trying to see the holdup. Having made our ritual stop at the Beach Mart, the last spot on the mainland to pick up what might have been forgotten, we were eager dig our toes in the sand.

Once on the island, the only place to pick up essentials was VanWerry Grocery Store — Groceries/Shells/Souvenirs. From there, turn left and you’d run into Surfside Pavilion, a coral-colored building with putt-putt out front, the green carpet soggy with moisture — free game with a hole-in-one, the sign read. Turn right, and you ended up at the pier, where you could find Mexican jumping beans and flip-flops, sand pails and shovels, and those shellacked pine plaques that offered advice to fishermen on how to lie or how to predict the weather or how we are all like little grains of sand. There were bins of seashells and magical growing rocks and sea monkeys, whose box promised a colony of creatures that would smile, wave, and wear crowns. 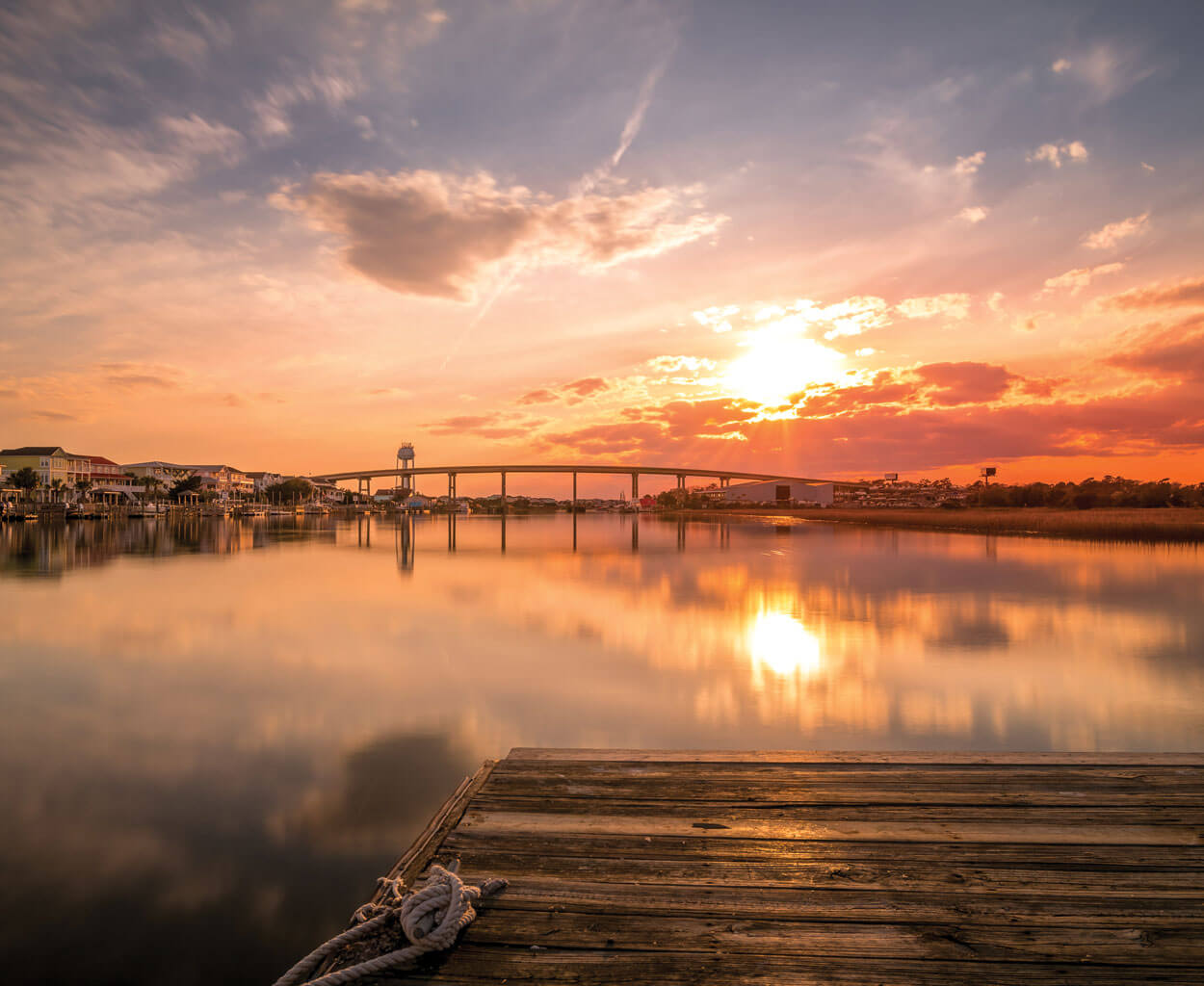 A new bridge to Holden Beach was finished in 1986. photograph by Wandering Surfer Studios

Postcards filled a spinning rack, most boasting the beauty of the pier and the sunsets and the ocean waves, but there were also some with cartoons. I saw my first risqué postcard at the pier, though I didn’t know that immediately; I had to study it a long time before I fully understood what was going on. When I got it, I quickly hid that one behind the others so that no one would know what I had been looking at. It was much better they suspect that I’d been scrutinizing the cartoon dog peeing on a tobacco plant and asking, “Have your cigarettes been tasting funny?”

I bought Archie comics and dot-to-dot coloring books and those flat, long pieces of saltwater taffy that can outlast all other penny candy. Going out on the pier itself, all the way to the end, it was not unusual to find people with sleeping bags prepared to stay the night. There, you had an endless view of the stars and the ocean; in the distance, the lights of Southport and Oak Island to the east, Ocean Isle to the west. But the greatest entertainment of all was simply being at the beach, sprawled on the sand or riding the waves. 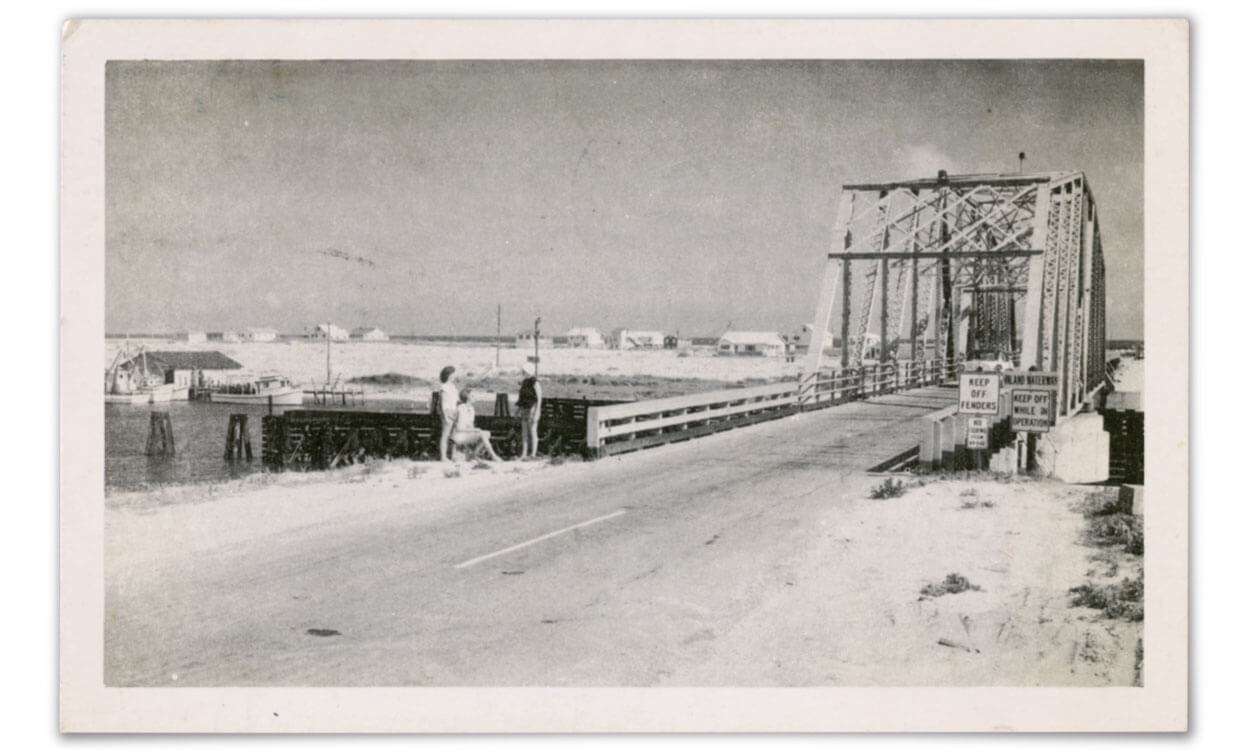 We stayed at a beach house on the east end of Holden, owned by family friends in Lumberton. “The Lone Eagle Nest” was a traditional two-bedroom cottage, painted pink and set high on pilings, with one large room, a small bathroom, and a screened porch. This was a time when you needed to bring your own water to a beach house, and none that I knew of had air-conditioning. Occasionally, the breeze died and the heat settled over everything, no-see-ums swarming. I only remember one of those nights. If there were more, they were long ago eclipsed by all the other nights when there was a good breeze blowing in sync with the ocean, rattling window blinds and chilling sunburned skin.

When I stood at the top of those dunes, I felt that Maria von Trapp had nothing on me.

I was told that prior to Hurricane Hazel in 1954, The Lone Eagle Nest lot had been a couple of rows back from the ocean. Hazel hit the coast of North Carolina four years before I was born, but I heard the name spoken so often that I have always seen her as a part of my own history. The devastating storm demolished all but 12 houses on Holden Beach and left only one man, Luther Holden, surviving among those who had chosen to stay. I was told that people paid a tax of $1 (or less) per year on their now-submerged property, something that entertained my imagination all through childhood. I used that fact later, in a novel: a young man going wading at low tide each day, to claim his land.

In the late ’60s and ’70s, you could walk from Holden to Long Beach at low tide to see one of the Civil War vessels lodged out there. The tide came in quickly, and people were always warned about getting caught. I heeded those warnings, preferring instead the valley of massive sand dunes at that end of the beach. I had never been snow skiing or even visited a mountain ski slope, but I imagined that it looked like those huge hills we rolled down, sometimes running out of necessity as the hot white sand scorched our feet. When I stood at the top of those dunes, the breeze off the ocean constant, I felt that Maria von Trapp had nothing on me. In Sunday school, whenever they spoke of the Promised Land, this was what I pictured for Moses: the tip-top dune at Holden Beach, expansive sand like the desert, with views of the Intracoastal Waterway and the magnificent, endless ocean. 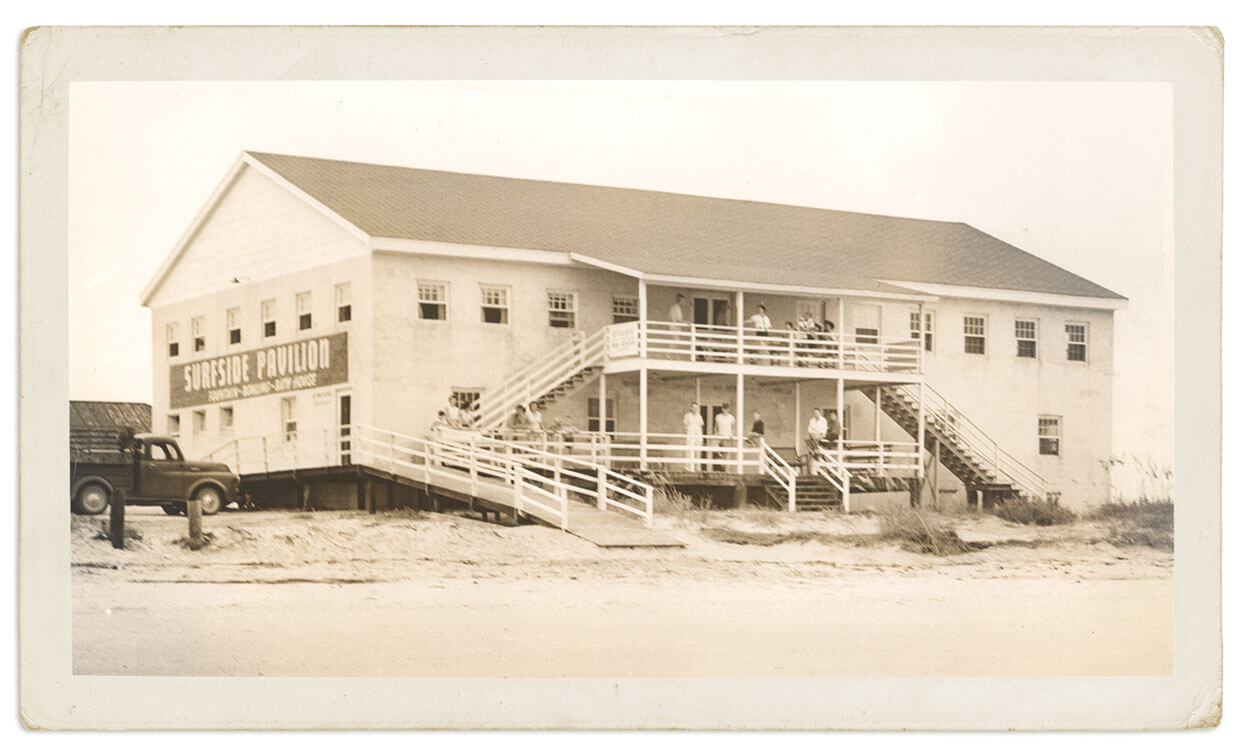 When I came back to Holden for the first time after many years living out of state, I was struck by how familiar it all was — despite all that had changed. The rustic swing bridge that had operated since 1952 was replaced with a high-rise bridge in 1986, a beautiful, curving expanse that provides breathtaking views. But now, there’s no need to cross back over it if you forget something: Holden Beach General Store stocks anything you might need, including locally made pimento cheese. It’s still a family beach, and a good place for fishermen in the fall and winter months. The inlet separating Holden from Oak Island (no one calls it Long Beach anymore) is far too wide and deep to walk across at low tide now. And many of the houses I saw in my childhood, as well as those huge sand dunes, are long gone, as are Surfside Pavilion and VanWerry’s.

But the Beach Mart remains, owned by Mr. Lyn Holden, who, on Thursday nights in the summer, gives talks about the history of the town. Lyn and his brother, Alan, are the seventh generation of their family to live or work on the island. I went to visit him to confirm those gauzy childhood memories: The sand dunes at the east end had once stood as tall as I recalled, he said. And yes, people paid $1 a year in tax on underwater property, a custom that only ended recently with pumped sand and the rebuilding of the beaches.

For those of us drawn to the coast, there is immediate calm that comes with the sound of the waves. Now, when I cross the bridge and take in that first glimpse of the ocean meeting the sand, I feel a connection to the past equal to the anticipation I feel for the days ahead. Milk and honey on the other side — or maybe just bread and pimento cheese at the general store. Still, as always, paradise.